While on stage, Olivia Wilde received Jason Sudeikis' custody papers from a stranger. How did this happen? 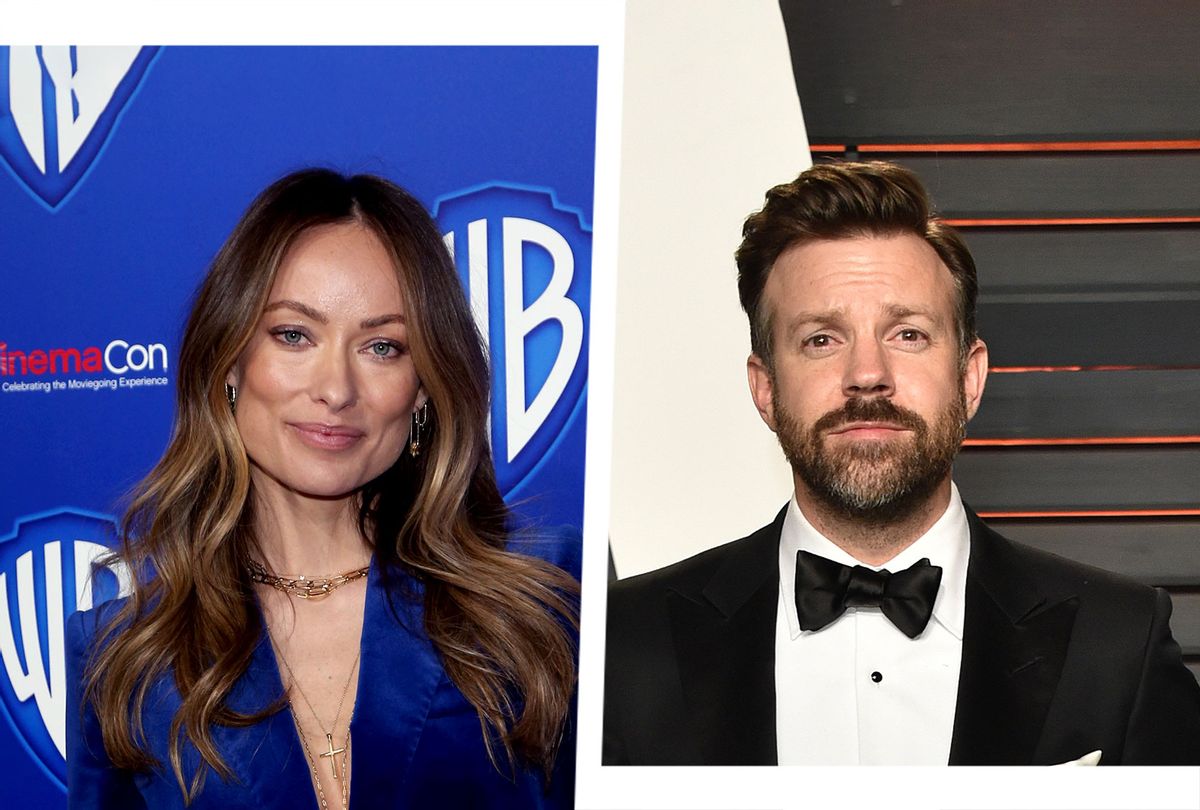 In a bizarre on-stage moment during Tuesday night's CinemaCon showcase, actor Olivia Wilde was given a mysterious-looking manila envelope while presenting her latest directorial release "Don't Worry Darling." To be precise, the envelope was actually tossed at her feet by an unnamed man who hastily approached her from the front rows of the stage.

The contents of the envelope, which was marked "personal and confidential," were initially believed to have been an unsolicited script by someone hoping she'd be moved to produce or direct it. However, Deadline reports that later it was revealed that the envelope contained child custody documents from Wilde's ex-husband and "Ted Lasso" actor Jason Sudeikis.

According to People, Wilde and Sudeikis had an "amicable" split in 2020. The pair share two children together — Otis Alexander, 8, and daughter Daisy Josephine, 5 — and were transitioning to a "great co-parenting routine." Tuesday's hoopla, however, proved to be anything but amicable.

Sudeikis reportedly "had no prior knowledge of the time or place that the envelope would have been delivered," a spokesperson for the actor said on Wednesday. The actor, however, knew the papers had been filed against his ex-wife, but was unaware that his own attorneys had arranged for the custody documents to be handed to Wilde during her CinemaCon presentation.

RELATED: How Olivia Wilde reinvented herself

Sudeikis' spokesperson added that the actor "would never condone her [Wilde] being served in such an inappropriate manner."

How the hell did this happen?

"Inappropriate" is putting it mildly. This is the type of ridiculous scene that's more appropriate to a cheesy rom-com or sitcom – not with real people whose lives are involved.

In Las Vegas, where the incident took place, divorce papers must be hand-delivered by a "disinterested person," meaning someone who is neither a party in the case nor invested in its outcome. The defendant may be served anywhere — work, school, home . . . CinemaCon. The judge expects the server to do "everything possible" to locate the defendant within 120 days after the complaint was filed, but the server may request to serve by alternate means, such as by email or social media.

The creative, undercover serve is by no means common; most are very boring. You get a knock on the door. Once they confirm your name, you get an envelope. Simple. But for the server drunk on court-sanctioned power, the task may bear an uncanny resemblance to Ashton Kutcher's hidden camera pranks on MTV's "Punk'd." The methods can range from comedic to cruel. One Reddit user witnessed his little league coach get served by a faux hot dog seller. Another described a server who flirted with a defendant over Facebook messenger and served him divorce papers on their first "date." A Quora user slipped divorce papers in a pizza box, donned his son's old pizza delivery uniform and handed the pizza to his unwitting victim. "Enjoy your pizza!" he called as he strolled away.

Servers tend to only employ drastic measures when dealing with particularly evasive defendants who flout the law regularly. While celebrities certainly may not be easy to access by the public, they're not exactly hiding. Wilde is not Emily Dickinson, and Hollywood legal servers probably have access to the usual clubs, day cares, and supermarkets frequented by stars.

Wilde's onstage ambush seems extreme and unnecessary, reflecting that it was less about Wilde and more about feeding the server's ego. The spectacle was humiliating for Wilde and possibly her two children, who may have to endure ridicule about the incident in school. And while Sudeikis had nothing to do with the shameful affair, it did bring the pair's personal lives into the spotlight in a way that can't be pleasant for either party.

Wilde is not the first celebrity to be served at a public event (Tyga was served at his own sneaker release party.) But as long as servers have free rein to employ any method of serving divorce papers, the public and schadenfreude-laden nature of this latest incident may embolden other servers to try and top it. The question becomes, what will come next as the stakes to stage increasingly shocking spectacles and embarrass public figures are raised? The nightly news? Award shows? Debates?

Whoever this server was, we couldn't see wanting to employ them again. While ingenuity might be useful for the trickier targets, often these legal issues are to resolve everyday but uncomfortable situations. They're not for the entertainment of the presumably bored, power-mad or highly inappropriate server.

What this means for Cinemacon

After opening the envelope, Wilde maintained her composure and continued addressing her audience. However, the brief yet random interjection raised eyebrows and concerns about security at CinemaCon and also, the legal integrity of the proceedings. How someone was able to bypass security staff and make such a grand, public scene without any immediate repercussions still remains a major question.

In their report, Deadline noted that "non-industry attendees need to purchase a badge" in order to enter the Colosseum — the theatre that hosts studio presentations and screenings — for CinemaCon. The outlet also added that the handling of legal documents is usually an "orchestrated" process and certainly not one that is done both haphazardly and disrespectfully.

In response to the incident, CinemaCon said they will reevaluate their security measures. Employees working at the Colosseum during Wilde's presentation later said they did not know how the unidentified man was able to enter the building. CinemaCon producers allegedly allowed the presentation to continue following the disturbance.

"We have never in the history of the convention had an incident where a delegate has approached the stage who was not authorized to be there. In light of this incident, we are reevaluating our security procedures to ensure the safety of all our attendees," said Mitch Neuhauser, the Managing Director of CinemaCon, in a statement to Deadline.

"To protect the integrity of our studio partners and the talent, we will reevaluate our security protocols," Neuhauser also told Variety. "We will act accordingly because it's the right thing to do. We want to do the safe, proper thing."

Wilde's upcoming thriller film "Don't Worry Darling" stars Florence Pugh as a 1950's housewife who lives with her husband, played by Harry Styles, in a seemingly utopian society with underlying dark secrets. According to Wilde, her film is "a love letter to movies that push the boundaries of our imagination."