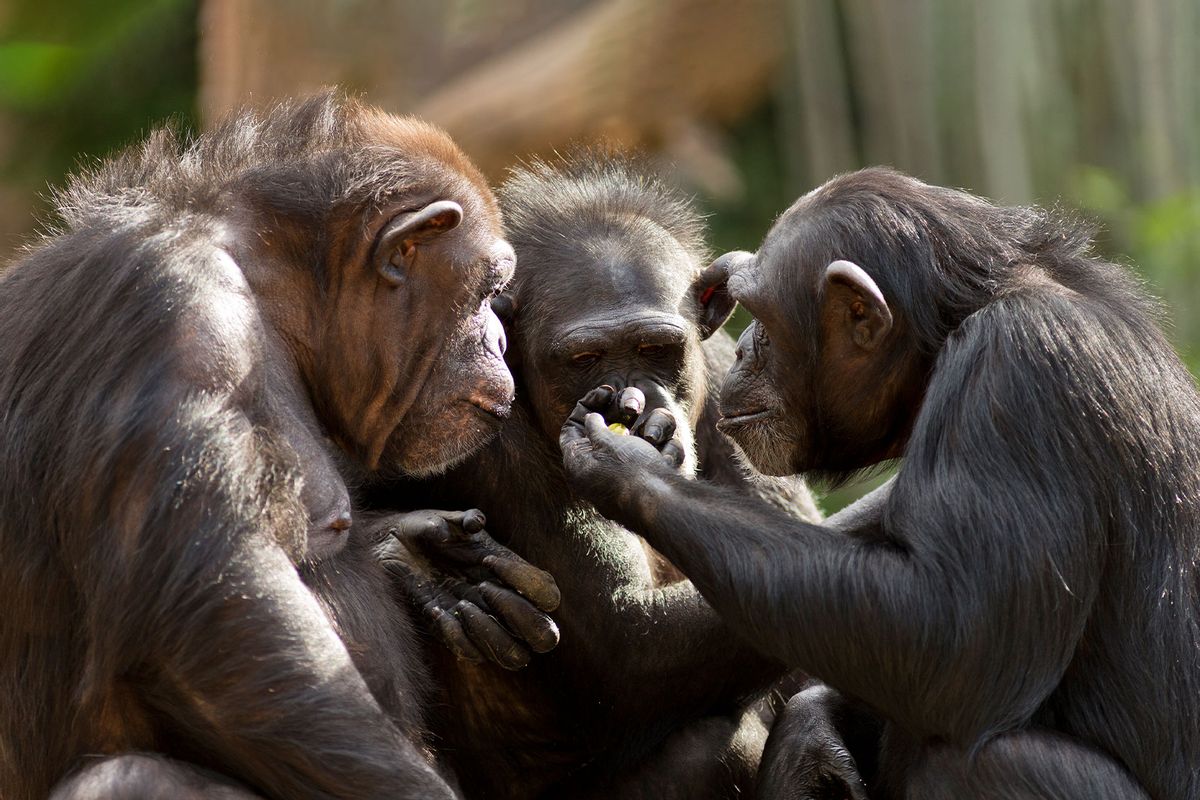 Few animals appear to be able to communicate with a range as complex and intricate as humans. Those language skills may exist in a limited capacity in our nearest evolutionary neighbors, the great apes, many of whom have been trained to communicate via sign language by human researchers. Yet while sign language is communicated physically, researchers did not believe that great apes possessed their own comparable, complex spoken language.

Until now, that is. A new study reveals that chimpanzees — or at least, a group of 46 chimpanzees at Taï National Park in the African country of Côte d'Ivoire — are capable of complex vocalizations far beyond what more pessimistic scientists thought was possible. Their "words" were not like human phonetic words, but a combination of chimpanzee sounds, which generally sound a bit like grunts and chirps to human ears. And the size of the chimp dictionary? Almost 400 words.

RELATED: The bioethics of the first human-monkey hybrid embryo

"Chimpanzees produced 390 unique vocal sequences," explained the scientists, who published their research in the journal Communications Biology. "Most vocal units emitted singly were also emitted in two-unit sequences (bigrams), which in turn were embedded into three-unit sequences (trigrams)."

"What is astonishing in the chimpanzee vocal repertoire... is the extreme flexibility in which they can combine their limited number of signals."

For context, the average human 20-year-old English speaker knows an estimated 42,000 words, according to Science magazine.

The scientists suggest that the way the vocal sequences were arranged suggests they could come up with new words, too. "From a purely structural perspective, the capacity to organize single units into structured sequences offers a versatile system potentially suitable for expansive meaning generation," they write. "Further research must show to what extent these structural sequences signal predictable meanings."

"What is astonishing in the chimpanzee vocal repertoire, compared to other non-human animals, is the extreme flexibility in which they can combine their limited number of signals," Catherine Crockford of Germany's Max Planck Institute for Evolutionary Anthropology, who co-authored the paper, told Salon by email.

While the researchers cannot say how this vocal complexity compared with human language, "the flexibility we show in this paper occurs across their whole vocal repertoire. In other animals vocal sequence flexibility seems mainly limited to either alarm or mate attraction contexts. So in chimpanzees, we expect to find some interesting expansions of meaning."

"This line of research will help us understand how human language may have evolved."

This research has implications which go far beyond simply understanding how chimpanzees communicate. Although humans have developed thousands of languages through millennia of recorded history, they have not done so by producing thousands of different types of sounds. Like chimpanzees, humans have had to utilize a limited range of sounds to convey a limitless expanse of meanings. As such, the new research has potentially profound implications for evolutionary biologists.

"This line of research will help us understand how human language may have evolved," Crockford explained before elaborating on how humans are "very limited in the sounds we actually use in speech." The scientist added that "here we demonstrate the first part in chimpanzees — a hurdle towards language — having flexible enough vocal production to be able to mix existing sounds together," and that this in turn could shed light on how speech evolved in humans.

That said, Crockford added that scientists still have a long way to go before they can truly tap into the potential of what they now know about chimpanzee vocalizations.

"The next step is to determine if these sequences allow chimpanzees to convey substantially more messages to their group mates than single calls allow... [For instance,] if an animal has 10 call types and cannot combine them, they can send a maximum of 10 messages," Crockford told Salon. "If they can flexibly combine them, as we demonstrate the chimpanzees do, they have the potential to convey many more messages. Now we need to assess whether they really use that potential to convey many messages."

If you are hoping that this means you may someday get to talk to chimpanzees, though, you should know that while that could happen, Crockford suspects "the conversation might still be very limited."

While this is true, it also helps to use the study as a reminder that chimpanzees are far more like humans than we may want to admit.

"Chimpanzees give every indication of empathy in some of their dealings with members of their communities, such as when they console one another following some trauma," biologist Ashley Ward told Salon last month. "Regardless of the challenges of determining any animal's emotional state scientifically, it does seem unlikely that humans are the only animals capable of expressing empathy."