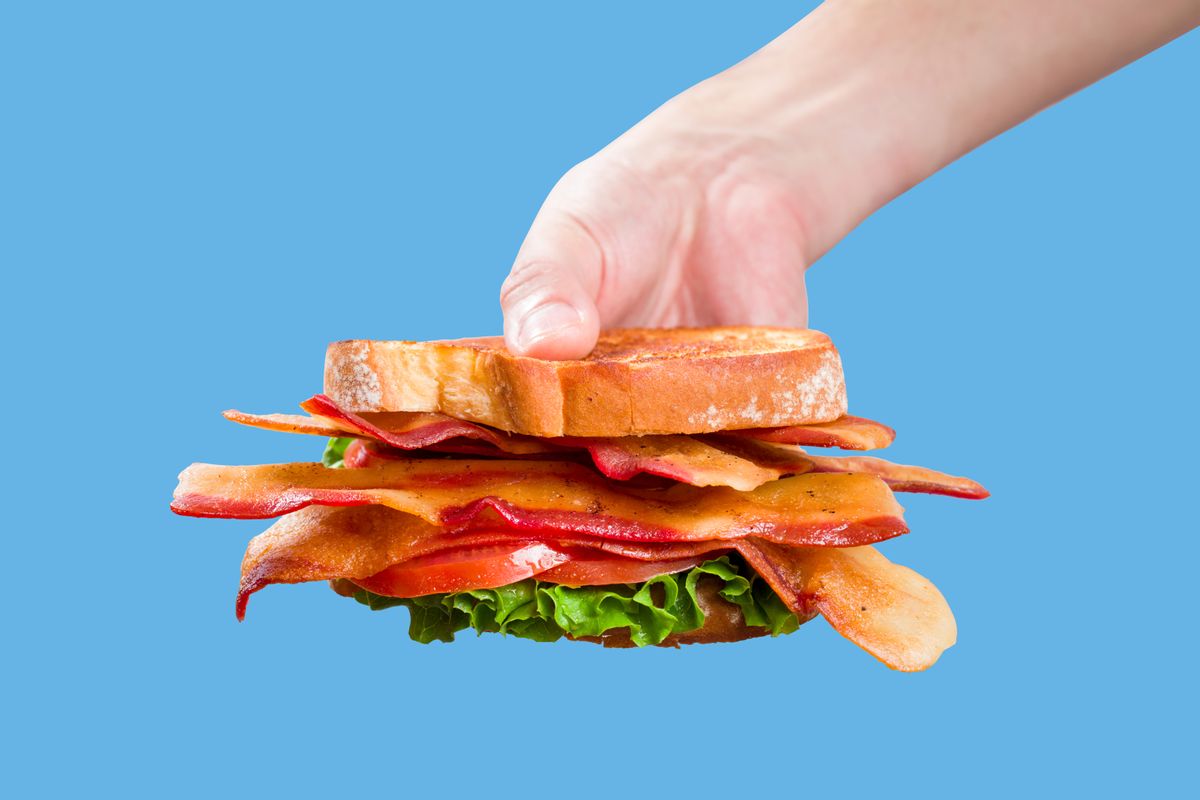 The above constitutes the smattering of descriptors I received in my DMs in response to an Instagram story I shared of Hooray Foods's plant-based bacon sizzling away in my cast iron pan. The wavy, flax-hued strips — streaked with color that I can now only describe as sushi-grade-tuna red — were destined for my standard-issue BLT: toasted sourdough, a generous smear of real (as in Hellman's) mayonnaise, a couple juicy heirloom tomato slabs and leaves of little gem lettuce. The $50,000 question: Could the faux bacon reliably stand in for the real thing?

I'll admit that when I got the email from a Hooray Foods' spokesperson asking if I'd like to sample their bacon, my first instinct was to politely decline, mainly because I was afraid I wouldn't like it and didn't want to say so aloud. I'm something of an evangelist for cooking and eating mostly plants — from green leafies to root veggies, pulses, grains and beans — but I've yet to subscribe to the vast and growing meat analog category.

I watched the coconut fat melt from the faux bacon strips, bubbling around them much as pork belly renders its fat in a pan. I would later learn this was an intentional decision for appearance as much as rich mouthfeel, per Hooray Foods food scientist Patrick Dziura.

"The coconut oil … allows Hooray Foods bacon to cook in its own fat, as coconut oil goes from solid to liquid form when heated, resulting in a great cooking experience and recreating that sizzle people enjoy when cooking pork bacon," he said.

It took a little longer, at a higher temperature than the packaging said, to achieve a satisfying crispness in the faux bacon, whose form comprises mainly rice flour and tapioca starch. Finally, I stole a strip for a taste. The brittle crunch of the exterior gave way to a gentle chew in the middle, not unlike the real thing. As Dziura told me, starches mimic bacon's crisp and chew because "they take on a form of gel as they go through the hydration process." Then, as you dry-heat them, they naturally harden, similar to when you toast bread.

Almost immediately, I noticed how much less salty the fake-uhn is — perhaps because I anticipate a sodium bomb upon whenever I tear into a slab of bacon before it fractures into a symphony of smoke, fat and meaty goodness on my tongue. This may explain why the fake-uhn's umami seemed comparatively muted: a savory, pleasingly mushroomy backbone with a gentle hit of liquid smoke and toasty sweetness from maple syrup.

Overall, I enjoyed it, though its subtlety proved no match for the BLT, a study in elemental sandwich perfection. Each component speaks just loud enough to balance the others: the tangy, creamy mayo; the juicy acidity of the tomato; the brashly salty, smoky bacon; the sweet, crisp lettuce; the heft and crunch of the bread. Here the faux bacon merely offered a secondary form of starch with savory, faint smokiness. By the second half of the sandwich, I started wishing I'd left it out altogether to enjoy another minimalist classic: the tomato sandwich.

But upon reflection, it was unfair to put the fake-uhn on trial in such a high-pressure swap-out. In fact, its smoky umami would've fared much better as a crumbled accent to the salad I'd made alongside our BLTs, which comprised spicy arugula tossed in avocado-yogurt-lime dressing tinged with raw garlic and piquant scallions. In fact, that's where the remainder of those starchy strips will go — and perhaps as the garnish on my next bowl of congee or creamy potato soup.

Regardless, this experiment has me thinking about the ways we might wean ourselves off of Big Ag meat — a cyclically cruel capitalist system that wreaks havoc on our already changing climate. We can mitigate our impact by paying a premium to eat humanely raised, even older animals — which by their price point alone make us eat meat less often. We can swap plant-based analogs into our existing meaty repertoire, knowing that very few ingredients behave quite like beef, pork or chicken do when cooked. For instance, pork inherently comprises the ideal ratio of lean muscle to fat required for traditional sausage making.

Of course, such ratios offer guides for companies like Hooray Foods, which modeled its bacon to simulate approximately 60 percent "muscle" elements — from starches — and 40 percent fat — from coconut oil. Indeed, food science has reached the point where an Impossible burger can actually "bleed" due to genetically engineered "heme" from soy. All this effort to move the needle a fraction; Americans ate only a shade less meat in 2021 — 224.8 pounds compared to 2020's 225, according to USDA reports. Until last year, our meat consumption had been on the rise since 2015.

But change starts small and takes time. I learned that Hooray Foods founder and CEO Sri Artham created the company's faux bacon prototype — featuring red shading and that wavy shape — in his own home kitchen. Then he brought on chef Sam Lippman to fine-tune it before an R&D team was formed to adjust it for manufacturing.

"The pattern was designed to look as close to the cut of pork belly as possible, featuring the distinction between fat and muscle on the top and bottom of each strip," spokesperson Olga Verkhotina told me. Likewise, Artham knew that packaging was key to mimicking the full experience, which is why Hooray Foods' bacon is shingled across an L-board pack.

The result may resemble candy or plastic to some; it might not work in most instances where I'd traditionally deploy a few strips of cured pork belly. But it can lend smoky umami and textural crunch to plenty of veg-based dishes, if one only takes a chance on it. More importantly, by its very existence Hooray Foods chooses optimism. And what's not to like about that?