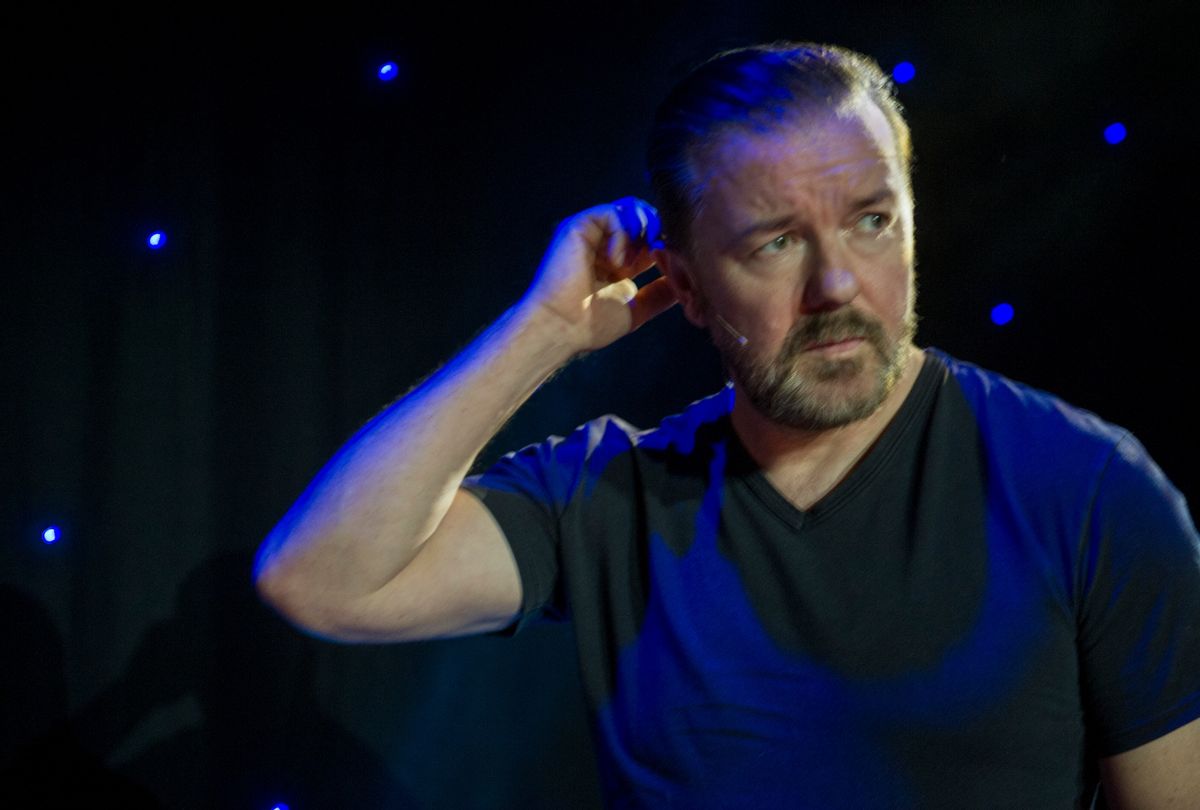 Following his string of transphobic tweets and a controversial Golden Globes hosting gig, Ricky Gervais is reiterating his harmful rhetoric and remarks, this time with a new Netflix comedy special.

In the opening of his stand-up special "SuperNature," the British comedian-actor-director launched into a transphobic rant, specifically targeting trans women.

"And now the old-fashioned ones say, 'Oh, they want to use our toilets.' 'Why shouldn't they use your toilets?' 'For ladies!' 'They are ladies — look at their pronouns! What about this person isn't a lady?' 'Well, his penis.' 'Her penis, you f**king bigot!' 'What if he rapes me?' 'What if she rapes you, you f**king TERF whore?'"

The cheap jokes continued when Gervais spoke about Kevin Hart, who publicly stepped down from a 2018 Oscars hosting appearance after his past homophobic tweets resurfaced.

"You can't predict what will be offensive in the future. You don't know who the dominant mob will be," Gervais said. "Like, the worst thing you can say today, get you canceled on Twitter, death threats, the worst thing you can say today is, 'Women don't have penises,' right? Now, no one saw that coming. You won't find a 10-year-old tweet of someone saying, 'Women don't have penises.' You know why? We didn't think we fucking had to!"

RELATED: The fall of Ricky Gervais: How did the once-brilliant star of "The Office" end up here?

Towards the end of his stand-up, the comedian attempted to explain his jokes and offer his backhanded support to the trans community:

"Full disclosure: In real life of course I support trans rights. I support all human rights, and trans rights are human rights. Live your best life. Use your preferred pronouns. Be the gender that you feel that you are. But meet me halfway, ladies: Lose the cock. That's all I'm saying."

Just a few hours after its debut, Gervais' contentious set garnered backlash on social media from multiple trans allies who emphasized that such offensive takes are not comedic material.

"Ricky Gervais has a new stand up show out on Netflix today," one user tweeted. "5 minutes in and he's making jokes about trans women attacking & raping people in public bathrooms. To him we exist only as a punchline, a threat, something less than human."

"Ricky Gervais New Stand Up Show #SuperNature makes jokes about trans women attacking & raping people in public bathrooms," another user wrote. "This isn't comedy. This is making cheap, nasty stereotypes out of a minority group. Please, if you're Transgender or Support Trans lives, don't watch this."

A separate user tweeted his decision to cancel his Netflix subscription over Gervais' special: "In honour of Ricky Gervais and his 2-4-1 rant on trans people and cancel culture, I am in fact, cancelling. Thanks," the user wrote, ending his message with the hashtag #TransRightsAreHumanRights.

Gervais' transphobic tirades and views are not a new incident. The comedian previously came under fire in 2016, when he poked fun at Caitlyn Jenner at the Golden Globes, and in his 2018 Netflix comedy special "Humanity," in which he once again made jabs at Jenner. In 2019, Gervais was condemned for his thread of transphobic tweets, which were reportedly in response to the satirical Twitter account Jarvis Dupont.

"We need to protect the rights of women," Gervais wrote in one of his tweets. "Not erode them because some men have found a new cunning way to dominate and demonise an entire sex."

"But if I've said anything transphobic you should report me. Twitter has rules in place to guard against that sort of vile bigotry," he continued. "My account will be closed down and you'll be proved right and will have saved millions of lives. Why aren't you doing this?"

Gervais later told The Hollywood Reporter that his comments were just "taking the piss out of Jarvis Dupont" and other accounts. He also shifted the blame onto social media critics, stating that people were too quick to take offense to crude jokes.

"And this is the problem. You can say, 'Listen, I was joking. It's a joke.' But that's not always enough for people," he said. "They go, 'Well, why were you joking?' Also, add to that the nature of Twitter — it's so curt, there's no nuance, it's there forever out of context."

Following its premiere, "The Closer" earned criticisms from trans activists, allies and Netflix employees, who organized a walkout protesting the streaming giant's choice of content. Despite the outrage, Netflix head Ted Sarandos offered support for Chappelle and his comedy, bluntly stating that "content on screen doesn't directly translate to real-world harm."

"With The Closer, we understand that the concern is not about offensive-to-some content but titles which could increase real world harm (such as further marginalizing already marginalized groups, hate, violence etc.)," Sarandos wrote, per CNN. "While some employees disagree, we have a strong belief that content on screen doesn't directly translate to real-world harm."

With Gervais' latest special, Netflix has made it clear that it has no problem with transphobic comedians nor does it have an issue with providing them a platform to spew inflammatory statements, which mind you, are supposedly just "jokes."