Who is Kamala Khan, the star of Disney+'s "Ms. Marvel"? 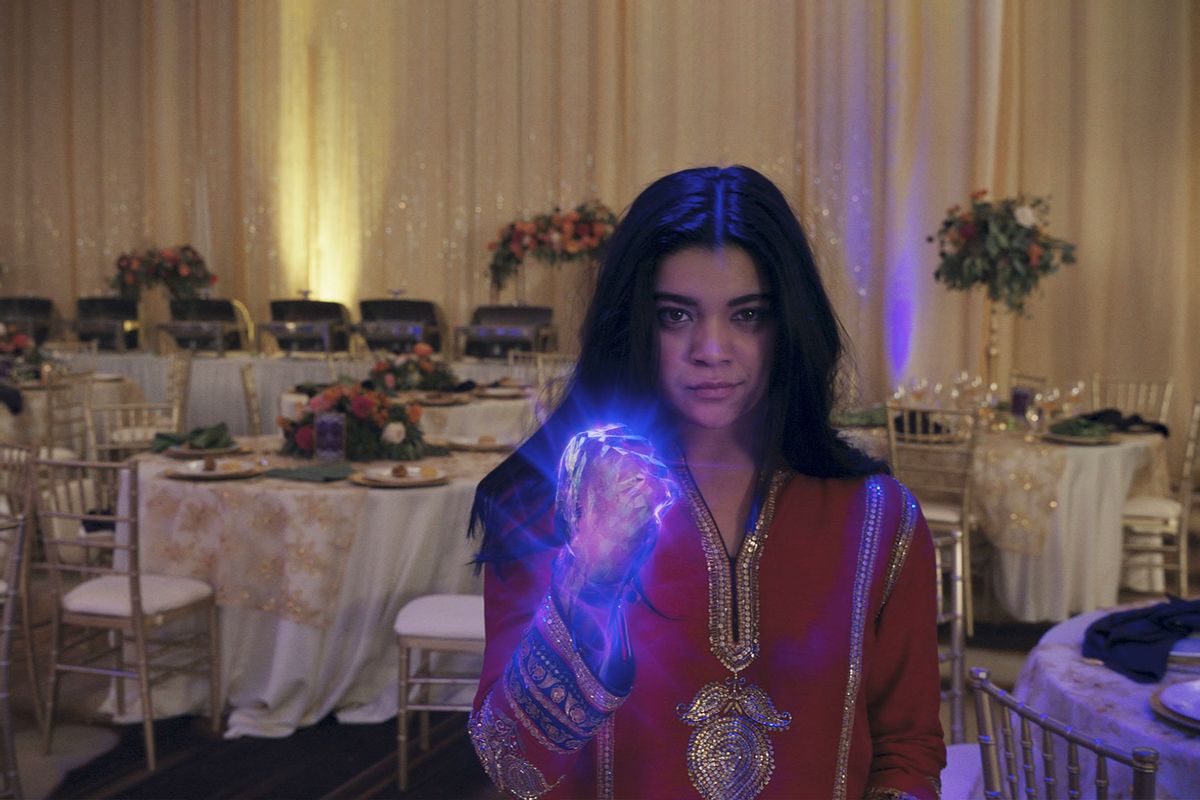 Behold, there's a new kid on the MCU block!

Marvel's first female, teen, Muslim superhero, Ms. Marvel, will finally make her anticipated onscreen debut on Wednesday in the eponymous Disney+ television miniseries. The six-part showcase focuses on Kamala Khan, a young Pakistani American woman who loves superheroes but is unaware — albeit temporarily — that she is also one of them.

RELATED: The best comics of 2015: With Islamophobia rearing its ugly head, we need "Ms. Marvel" now more than ever

In the same vein as Spider-Man, Kamala is a high school student by day and a young hero by night, fighting crime and rescuing innocent civilians on the streets of Jersey City. Her current alias also pays homage to her main idol, former Ms. Marvel, Carol Danvers, whom she embodies in her heroic endeavors.

On the show, Kamala is played by 19-year-old Pakistani-Canadian actress Iman Vellani, who is also a self-declared Avengers enthusiast just like her character. Here's a closer look at Kamala's backstory, including her early beginnings and epic transformation from fangirl to superhero.

The daughter of Pakistani immigrants, Kamala was born in Jersey City, New Jersey. She lives with her parents, Yusuf and Muneeba Khan, and her older brother Aamir.

Although she oftentimes feels ostracized at school due to her "nerdy" interests and strict upbringing, Kamala finds solace with her two best friends, Nakia Bahadir — whose family belongs to the same mosque as the Khans — and Bruno Carrelli. Kamala and Bruno first met in the second grade after Bruno and his younger brother, Vick, were separated from their mother and sent to go live with their grandparents, who are immigrants from Italy. Over time, the pair grew closer, bonding over their experiences of growing up in immigrant households and their shared love for the animated TV series "Tween Mutant Samurai Turtles."

Kamala is also an avid fan of the Avengers and all things Marvel. In her spare time, she loves playing video games and writing superhero-themed fan fiction. Her favorite superhero is Carol Danvers (a.k.a. Captain Marvel, a.k.a Ms. Marvel), but she also really likes Iron Man and Captain America.

Kamala slowly discovers her secret powers after she attends a late-night high school party at the Jersey Waterfront in an attempt to prove her "coolness." Once there, she faces relentless teasing from her peers and ends up leaving disappointed. While walking home, Kamala is exposed to Terrigen mist that was released by the Inhuman King Black Bolt via a Terrigen Bomb. The mists are known to trigger a latent Inhuman gene in depowered mutants, human beings who possess a superhuman genetic trait.

While in her Terrigen cocoon, an unconscious Kamala has a bizarre vision involving her three favorite heroes. The trio scold her for going against her parents' orders and then ask what she wants in life, which prompts Kamala to express her desire to become more like her beloved role model. When she emerges from her cocoon, Kamala wakes up as a young Carol Denvers decked out in her classic Ms. Marvel costume.

Now a polymorph, Kamala initially struggles to control her powers but soon gets the hang of it after saving one of her schoolmates during a moment of danger. Her heroic showcase garners publicity and praise but is quickly cut short by her parents, who subsequently ground her. Despite the hindrance, Kamala decides she wants to be a superhero — once her punishment is over — just like Captain Marvel.

Kamala's specific powers include shapeshifting, which she uses to compress or flatten her body and elongate her limbs or enlarge her fists. She also has an accelerated healing factor, allowing her to recover from serious injuries when she reverts back to her original self.

As she matures into her superhuman abilities, in the comic books Kamala tackles bigger battles, like combatting gentrification in her native town, and later joins both Nova and Spider-Man to form the Champions Team. Kamala also gains approval from Captain Marvel herself after fighting alongside the Avengers amid a cosmic Incursion.

British-Pakistani comedian created the new Disney+ series starring Vellani in the titular role alongside Yasmeen Fletcher as Nakia, Matt Lintz as Bruno and Rish Shah as Kamran, who is Kamala's romantic interest and a fellow Nuhuman with evil intentions.

Kamala/Ms. Marvel is also slated to appear alongside Captain Marvel and Photon in the upcoming 2023 film "The Marvels."