How Joe Biden is like America's founding fathers — and no, I'm not kidding 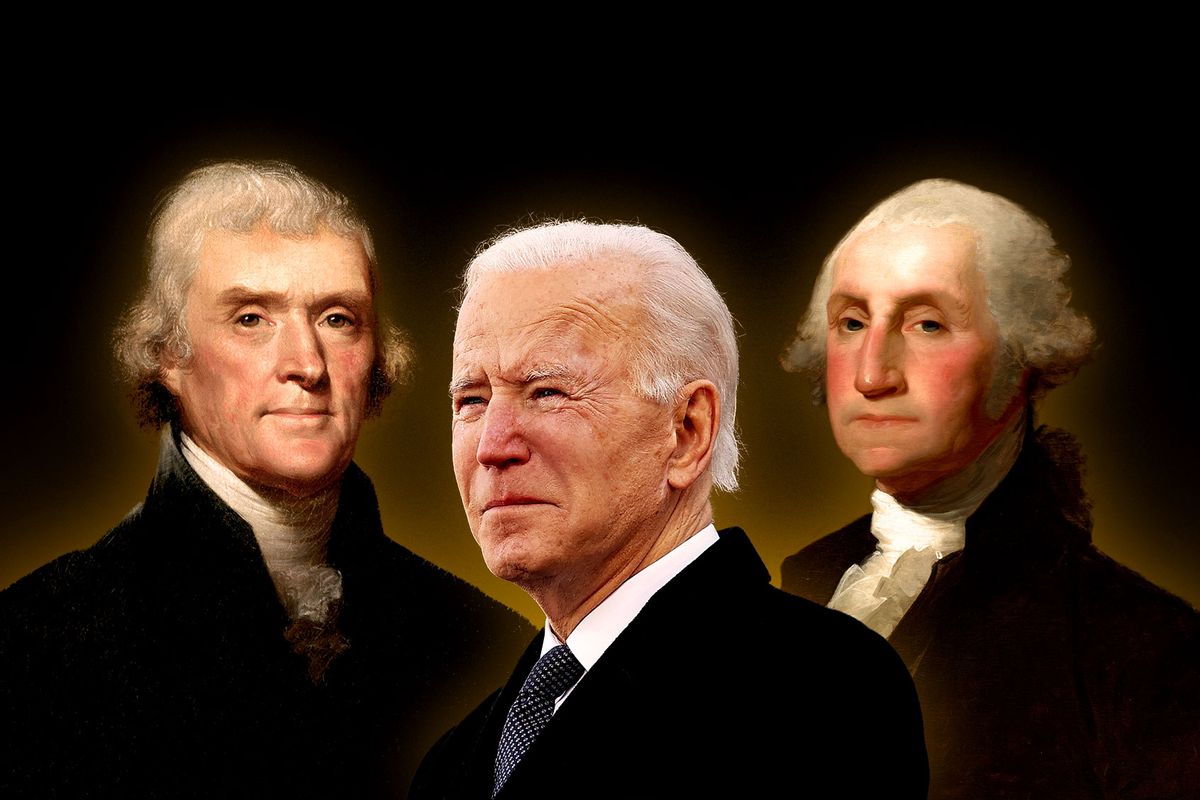 Many years ago, a young man named Frank Bourgin, a graduate student in history at the University of Chicago, wrote a dissertation arguing that founding fathers like George Washington and Thomas Jefferson had taken economic positions that, by modern standards, were highly progressive. He hoped that thesis would lead to an illustrious  career as a historian — but his advisers, without much of an explanation, rejected his arguments. It wasn't until many years later, when Bourgin was an old man and another historian discovered his work, that he was retroactively vindicated.

If Joe Biden's presidency continues on its current track, he may be remembered as a policy visionary ahead of his time and ignored by his peers.

Far be it from me to imply that academics are just as inclined to stifle radical voices as everyone else in America with actual power. Fortunately for scholars of history, Bourgin's dissertation was published in the now-classic monograph "The Great Challenge: The Myth of Laissez-Faire in the Early Republic," meaning we can still benefit from our founding fathers' lessons, as discovered and interpreted by Bourgin and his successors.

Let's go from one unexpected lesson to another: If Joe Biden's presidency continues on its current track, he'll be remembered in a similar way — as a visionary, at least on certain domestic policy issues, who was largely ignored by his peers.

I'm not claiming that the founding fathers were ignored in some larger sense; if that were true, the United States would not exist today. But as much as we'd like to imagine that Americans always rallied behind the ideas of a complicated genius like Thomas Jefferson, author of the Declaration of Independence, it simply wasn't so.

Some conservatives bravely try to claim Jefferson as one of their own, but he spent much of his presidency trying to use the powers of the brand new government to enrich the economic and intellectual lives of the American people. After creating a budget surplus, for instance, Jefferson proposed subsidies in scientific innovation, transportation infrastructure and public education. He even tried to enshrine the government's ability to spend money on internal improvements and education into the Constitution, an idea meant to help define his second term as president. (That was the same year that he denounced the international slave trade as "a violation of human rights" — and yes, he was a big hypocrite on that issue.)

As Jefferson later explained in an 1811 letter to Pierre Samuel Du Pont de Nemours (while discussing policies that were being proposed by his successor, James Madison), "our revenues once liberated by the discharge of the public debt and its surplus applied to canals, roads, schools etc., and the farmer will see his government supported, his children educated, and the face of his country made a paradise by the contributions of the rich alone, without his being called on to spare a cent from his earnings. ... The path we are now pursuing leads directly to this end which we cannot fail to attain unless our administration should fall into unwise hands."

That didn't happen, and it took many decades and many presidents before it became normalized for the federal government to spend money on developing the nation's physical and human resources. Jefferson's inability to realize his economic vision doesn't detract from his overall legacy, but it certainly offers some perspective on how even revered statesmen can have important ideas that go nowhere.

Bourgin goes into considerable detail about other founding fathers who had important policy ideas that were not heeded. Treasury Secretary Albert Gallatin (who served under both Jefferson and Madison) and President John Quincy Adams (who had previously served in various roles for America's first five presidents) were avid proponents of federal spending on public improvements, and also supported government funding for the sciences — and both were disappointed when they tried to bring their ideas to life on a national scale.

Jefferson imagined a future in which "the farmer will see his government supported, his children educated, and the face of his country made a paradise by the contributions of the rich alone, without his being called on to spare a cent from his earnings."

Even George Washington — who is venerated today but was fiercely opposed by many during his presidency — had his share of failures. When Treasury Secretary Alexander Hamilton published his Report on Manufacturers in 1791, he argued that the government should subsidize manufacturing and other forms of industry to make the U.S. economically competitive on a global scale. He also argued for tariffs on imported goods, and those were implemented while much of Hamilton's more ambitious infrastructure subsidies were not. It took a Republican president many years later, Abraham Lincoln, to realize the gist of Hamilton's vision, transformed into the "American System" proposed by Whig Party founder Henry Clay. (Lincoln was a former Whig, and his economic program favored the industrialized Northern states over the agricultural South, most of which was seceding from the Union at that moment.)

Let's consider Joe Biden's most conspicuous failures. From the start of his administration, he has pushed for an ambitious economic program: expanded access to health care, major investments in job creation, financial assistance to parents, accelerated development of green energy and other steps to address climate change. That last part is critically important at this juncture of our history, but because of two "moderate" Democratic senators with major corporate backing — Joe Manchin of West Virginia, and Kyrsten Sinema of Arizona — Biden's climate policy, along with most of his ambitious agenda, has died on Capitol Hill.

To this point, the political fates have cursed Joe Biden with the same bad luck that afflicted Washington, Jefferson, Hamilton and other founding fathers at their most ambitious but least effective — but without granting him anything close to their storied accomplishments or historical legacy. Is that just an ironic coincidence, a minor plot twist in the American story, or a telling symbol of the ultimate failure of the American experiment and the corruption of both our political parties? History will have to answer that question.