"Murina" filmmaker: "You need to be a 'dangerous' woman in Croatia to survive" 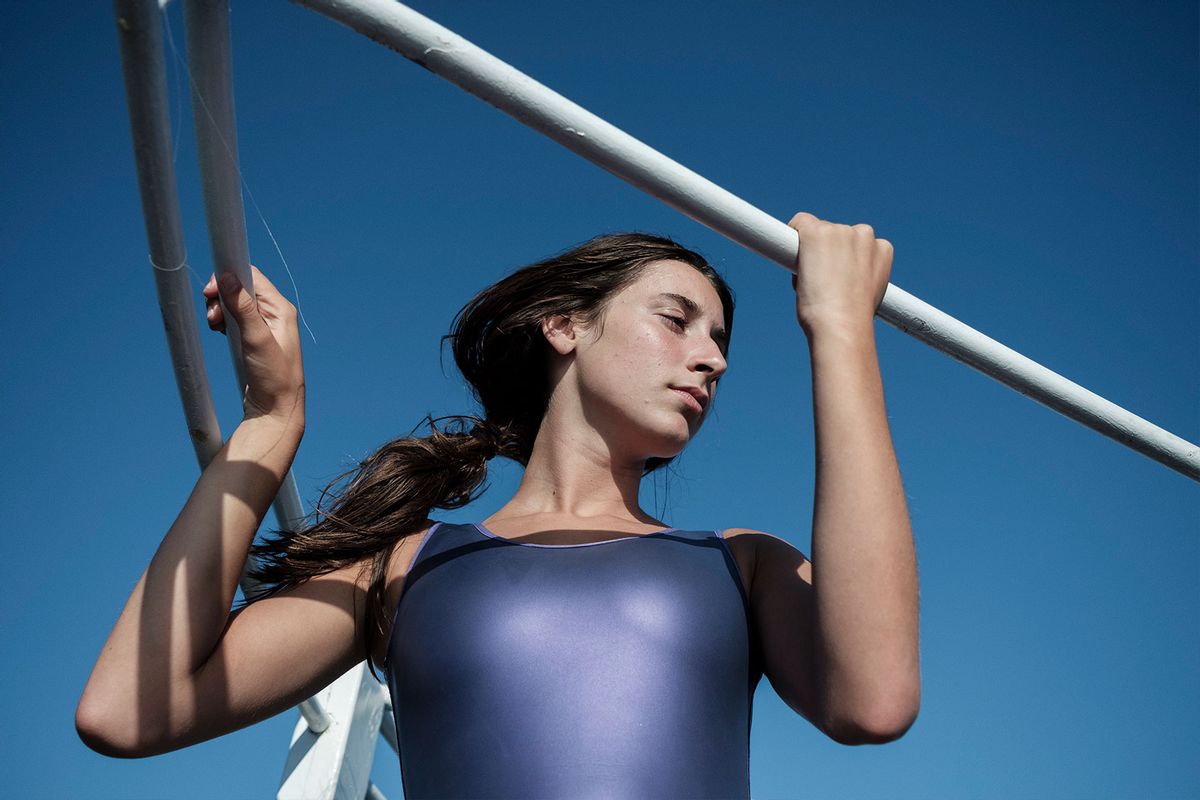 Antoneta Alamat Kusijanovic's fantastic feature debut, "Murina" won the Palm d'Or at Cannes last year and boasts Martin Scorsese as an executive producer. This intense drama has the teenage Julija (Gracija Filipovic), wriggling under the thumb of her controlling father, Ante (Leon Lucev), and docile mother, Nela (Danica Curcic). When Ante's rich friend, Javier (Cliff Curtis), arrives in Croatia to consider buying Ante's land, Julija sees Javier as a ticket out of her trapped life. But Ante is not going to let his daughter go so easily.

The film artfully shows the power dynamics between Julija and her father from the very first scene where they are spearfishing. He pushes his daughter out of the way to catch the murina (moray eel) of the title. It is a metaphor for the deal with Javier. But while the film plays up the slippery relationship between Javi and Julija, "Murina" also includes a love triangle between Javier, Nela, and Ante.

Kusijanovic — who directed the 2017 short film, "Into the Blue" which also starred Filipovic as Julija — addresses issues of toxic masculinity, class, and teenage sexuality with grace, making Ante as hateful as Javier is appealing to a sheltered 17-year-old girl. Filipovic's strong, internal performance communicates so much of her thoughts with her eyes and body language. This is why viewers root for her to claim her independence.

The filmmaker spoke with Salon via Zoom from her great grandmother's house on the island where she shot both "Murina" and "Into the Blue."

Julija is described in the film as well as your short, "Into the Blue" as being "dangerous." But one of the key sequences has Julija isolated and alone, afraid, and vulnerable. What is it about her character is "dangerous"?

Dangerous is an adjective for so many things in Croatian. It means independent, opinionated, having strong convictions, and self-respect. I love that word. You need to be a "dangerous" woman in Croatia to survive.

Water is where Julija feels safest. Can you talk about water as a metaphor in "Murina"? There are many critical sequences in and around the water, such as the diving episode, which shows Julija's bravery, Javier's admiration, Nela's regret, and Ante's impotence.

Water is always in juxtaposition of what is above the water. Above the water is a place without shade, where there is no release from the rocky land and the burning sun. Underwater, there is release — it's dark and murky, but there are other limits — you can't communicate, and you can't breathe. It's a completely different universe. It is in between those two impossible worlds, both inhabitable, which is where Julija lives, where she can exist in between, once she surfaces.

Water is also subconscious and where Julija allows herself to feel desire, to spill blood, and take actions she would never do above water. That is her freedom for me — for her to act on her desire — like a sea creature. She can be threatening underwater in a more serious way then when she is above ground because that is her playground. 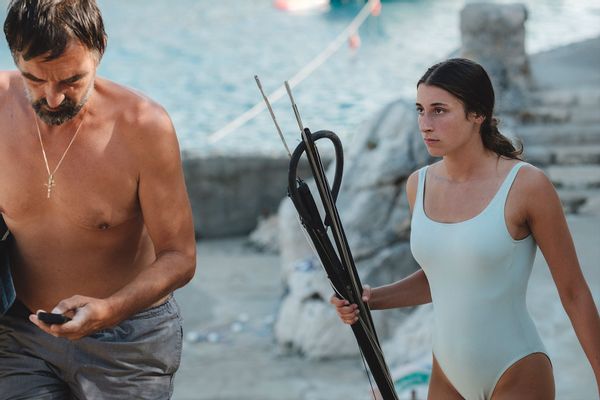 The film is incredibly taut as Julija struggles to defy her father. What decisions did you make about his character and their relationship? The angrier he is, the more we want her to escape.

It is interesting. In Croatia, when you have a daughter, you call her your "son." Both the mother and the father address their daughter as "my son"; that's the way of the language. This is how Ante would be with his daughter — he would treat her like a son. Through her sensuality, he sees danger. Through her being a woman, he sees betrayal. Through his own incapacity to succeed, he takes it out on her. All of these things you mentioned are his reactions to Julija, but they are a more of a reaction to his own dissatisfaction with himself and the world he created.

Also, if Ante controls Julija, he controls both women in the family. If Julija leaves, Nela will leave. He is not only taking his daughter hostage, he is, in his way, saving or protecting his family — but it is really self-protection. It is not for the benefit of the whole; it is for self-benefit out of fear. When men start to get scared in their "second coming of age," it is so dramatic. There can always be a movie about that, and depending on how much is expressed, it can be comedic or horrific. I laugh a lot when I watch "Murina," especially in Croatia, where they don't see it as violence, but mentality.

What other observations do you have about his character?

I don't think Ante cares about money. He just wants success so he can live the way he does. Everything in his life is inherited, and he wants to erode it for next generation. It is a horrible place for a man to be. It is a place of no creation or imagination. There is no support for him to generate more than he is given. He is impotent.

The film is all about manners, as each character puts on a face for others, masking their true selves to avoid conflict. The strength of your film is that viewers can see each character clearly. Thoughts?

I think that the characters have a certain level of awareness, but they are also unaware.  They are intuitive and impulsive. I thought of them as kids when I was writing the characters. That was the starting point: What if the only adult is this teenage girl and the other three adults are like kids? That's not too far from reality. We are always coming of age at every age. There is some sort of hormonal imbalance. You can have a midlife crisis or confront the life you've built so far, or the life ahead of you, or face your fears. There is always conflict within us and around us. It never stops. It is unfortunate that we are only allowed to express it at 17 when society accepts it. It is so unfair to the old kids within us.

What is Javier's motivation? He seems to play up to each of his hosts, flattering them, enticing them. But he is not exactly a white knight who can save them from themselves.

As a man who can afford any experience, Javier allows himself to play family with other people. He does not account for other people's lives. If he is called upon for something, he will solve it with money. That's a huge blind spot. Javier can only solve things that way, even within his own family. That's why he is envious of Ante, and that is what brings him back to [Ante's] family with so much desire.

What can you say about Nela's loyalty to Ante? She seems to resist Javier's flirtations, but they have a history, and she is conflicted in her desires.

Nela has so little freedom in her life that she allows herself to fantasize, and Ante allows her to fantasize. More than that, Ante endorses Javier's fantasy because that gives Ante something that Javier can never have. Because Javier has everything else. That is what makes them equal.

What is interesting to me is that Ante is so confident of his wife Nela, that, he can use her as a tool for Javier. That level of confidence in that marriage is very exciting — even when she is walking that thin line; he knows she will never cross it.

What can you say about ideas of social mobility, which seems to infuse the film?

Ante's wealth is beyond his knowledge. Having the land is worth more than anything. That is something I am commenting on. The Croatian economy is based on people owning their homes and their land. That wealth, or inheritance, is eroding, progressively, because people are selling their [inherited] land for a lot of money. In some of these people's minds, wealth is something different from what they already have. I see Ante as very wealthy.

He wanted to sell his house on the bay to buy an apartment in Zagreb!

It's not a holiday life. It's a hard life to live in that environment in the summer and winter. It's a harsh nature. But it is where they grew up, and what they know. The oppression — yes, nature is harsh — but the oppression is more psychological than physical.

Julija is often seen spying on David (Jonas Smulders) a young man on a pleasure boat that she crushes on and even kisses in one point. Is she using her sexuality to escape her father?

I didn't think that. Julija is so isolated away from anyone her age, and her responsibility to this life is so beyond what it should be. She should have freedom and fun and be able to fool around. Meanwhile, she's waking up at 5 a.m. and fishing with her father. [David] provides another outlet for her to express her desire for a connection underlining the isolation. The only people she sees are those [like David] who stumble in the bay in a boat.

Sexuality is something natural for a girl her age, and something she is confused about. The question of being attracted to someone has never arisen before until that summer. So, the father figure who endorses her, [Javier] or someone her age who can be a lover, [David] can be exciting for someone who is 17. Julija doesn't understand or have a perspective on the world outside at all. She just wants to be away from Ante. Ante knows his place in the world, and Julija can be the way she is because she doesn't. She has the reliance and power and exuberance and cluelessness of a teenager that is so essential. For her, everything is possible, and the best is yet to come.

Both your feature and your short featuring Julija are films about the loss of innocence. What points to you want to make regarding teenage girls, sexuality, and independence?

Female teenage sexuality really depends on role models: Who we are going to replace or run away from? Not every girl wants to find a man that is like her father. There is an expression in Croatia that everyone is looking for their father. That is a lie. Why would women continue looking for tyranny? That is how this lifestyle and mentality are endorsed. Both women and men want to continue lineage of violence. Regardless of mentality of chauvinism and misogyny, it is a confusing time to be a 17-year-old girl in any culture. It is such an insecure and sensitive time. Any compliment from a stranger, any encouragement from an adult, and attraction has so much value. It is a whirlpool of desire and fear.

Julija wants to be in presence of men who make her feel good. I don't think she knows what she's doing, honestly. She just knows this guy Javier has certain power and conviction that her father does not. She has not seen that level of confidence and power and she wants to be near it because Javier makes her feel better. But that is so naïve and clueless because life has layers and is more complicated. There is an obvious lack of wisdom we have as teenagers — and adults as well — but especially at that age. You figure something out and feel you know everything.

"Murina" opens July 8 in New York before expanding. Watch a trailer via YouTube.