Leave your cynicism at the door and embrace Anthony Fabian's confection about dreams, pluck and Christian Dior 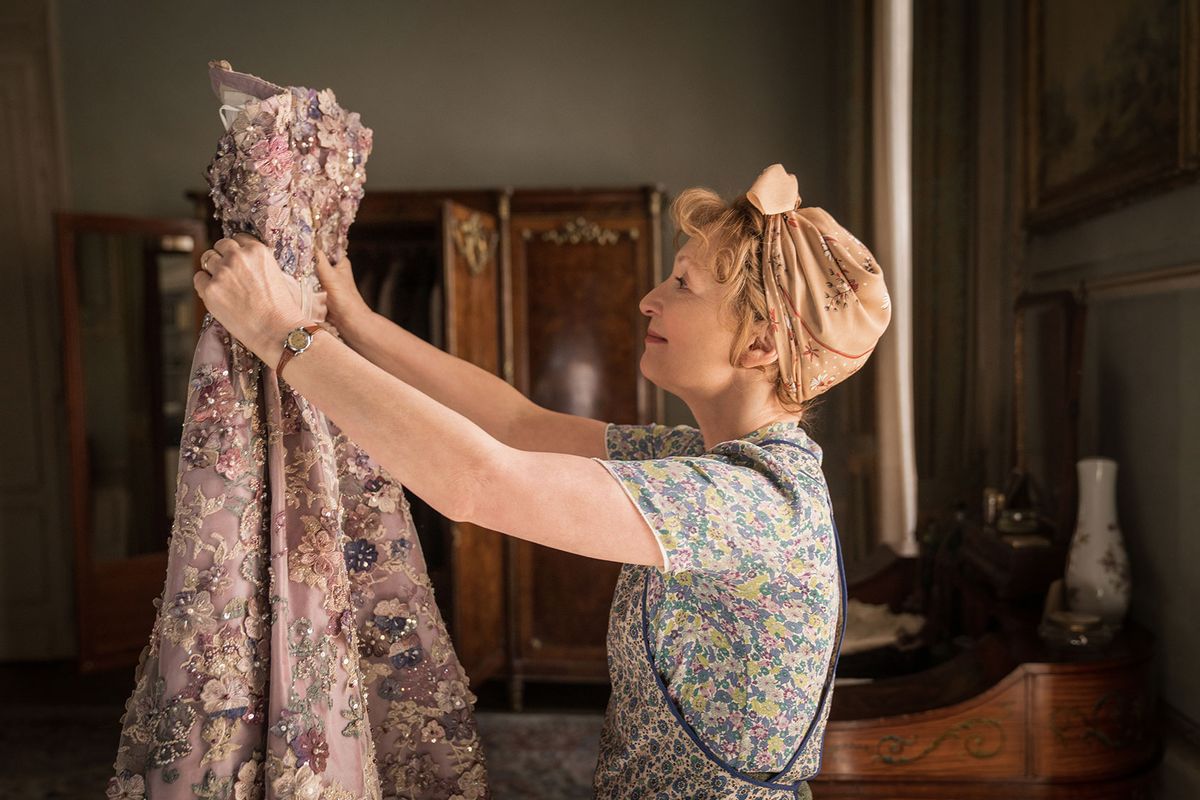 "Mrs. Harris Goes to Paris" is like "Mary Poppins" for young-at-heart adults. Based on the novel by Paul Gallico, this whimsical film has the titular character, Ada Harris (Lesley Manville), a working-class British cleaning woman in the 1950s, realize her dream of buying a haute couture Dior dress. Along the way, her kindness and common sense enables her to change the lives of almost everyone she meets for the better. It may be pure wish fulfillment, but this fairy tale of a film is as irresistible as the Dior dress Mrs. Harris covets.

Director Anthony Fabian invites viewers to indulge in this fantasy from its opening scene, where Ada tosses a coin on a bridge and a bit of magic happens. Will it be her lucky day? Ada goes off to work for her clients, cleaning their homes, and listening to and solving their problems. Mrs. Harris has problems of her own; she finally gets word that her husband, Eddie, has died in the war. She also has a client, Lady Dant (Anna Chancellor) who has not paid her for her work. But Lady Dant does have a Christian Dior haute couture dress, and suddenly, a dream is awakened in Mrs. Harris. She desires one of her own. And she will scrimp and save the 500 pounds (plus expenses) to make her dream dress a reality.

"Smash capitalism" to "release your job," what "Downton Abbey" & Beyoncé can teach us about progress

"Mrs. Harris Goes to Paris" shows the ups and downs its plucky heroine has trying to earn the money. She wins some, she loses some. She is always endearing. And she is distraught that she and her best friend Vi (Ellen Thomas), who also cleans houses, are "invisible" — unseen by society. Even their friend Archie (Jason Isaacs), who has a good relationship with Ada, asks her to watch his dogs so he can dance with a younger, prettier woman.

But then Mrs. Harris' luck comes in and she gets to Paris and, eventually, to Dior — where she is practically turned away at the door by the haughty directress, Claudine Colbert (Isabelle Huppert). However, Mrs. Harris quickly incurs the sympathy of the workers, who respect her dignity. So, too, does the Marquis de Chassagne (Lambert Wilson), a widower who asks her to accompany him to the fashion show that is about to start.

The collection sequence, which surprisingly features models of color, is a highlight of "Mrs. Harris Goes to Paris," as one dress after another is exquisite. Viewers will likely share the title character's breathy excitement with each presentation. However, Mrs. Harris is blocked from buying the "frock" she wants by a ritzier patron, Madame Avallon (Guilaine Londez), who gets exclusivity. Moreover, Ada is further dejected by having to unexpectedly spend a week in Paris to attend fittings for the dress she settles for instead. At least the accountant at Dior, André Fauvel (Lucas Bravo) can provide a free place for her to stay. What is more, a gracious model, Natasha (Alba Baptista), who is the "face of Dior," befriends her. 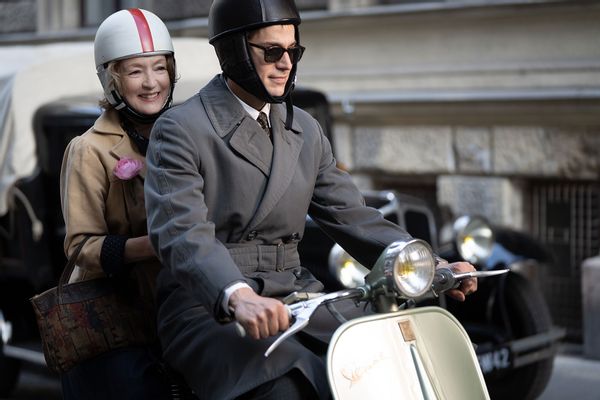 "Mrs. Harris Goes to Paris" is full of little contrivances that benefit its heroine and give her the opportunity to return the kindness tenfold. She cleans the apartment where she stays and feeds André and Natasha "toad in the hole" while also doling out advice about life and work, while nudging them to give in to their mutual attraction. (They both would rather be reading Sartre than working for Dior, but they each acknowledge they need to make a living.)

Mrs. Harris is also wined and dined by the Marquis, who plies her with champagne and caviar — it's "Lifestyles of the Rich and Famous"! Although one night of drinking and dancing causes her to oversleep and miss her fitting. Quel horror! Madame Colbert now has an excuse to refund Ada's deposit and send her packing tout de suite sans haute couture. At least, Ada is given a chance to see the atelier before she leaves. "It's heaven," she declares, and a few scenes later, Mrs. Harris, a "capable seamstress," is living the dream and sewing buttons alongside the other workers. What happens next is predictably satisfying, but Mrs. Harris also has a serious exchange with Madame Colbert, who wants to understand what this British cleaning lady is going to do with a Dior.

The answer, as "Mrs. Harris Goes to Paris" indicates, is less about looking good (though that is a plus) than it is about feeling good, and Fabian's feel-good film features little setbacks that only pave the way for greater jubilation. It is completely saccharine, like Rael Jones' score, but resistance is futile watching Mrs. Harris teach others how to live their best lives.

In the title role, Lesley Manville exudes a down-to-earth, goodhearted quality, and comes off more martyr than saint. It is enjoyable to see Mrs. Harris' transformation from put upon to empowered and Manville sells it because she is almost always dignified. An exchange she has with the Marquis that causes her to rethink their relationship is especially revealing.

In support, Isabelle Huppert plays Madame Colbert with suitable snootiness, but save for a nice vulnerable moment or two, she is mostly one-dimensional — like most of the supporting characters, including the Marquis, André, and Natasha in Paris, as well as Vi and Archie in Britain.

"Mrs. Harris Goes to Paris" offers no real surprises, just a series of mostly pleasant moments with a few unfortunate ones to make the triumphs sweeter. Fabian's film is so benign and enjoyable, viewers may find themselves uttering one of its heroine's oft-used refrains, "Oh, that's lovely." And for the romantics — not the cynics — in the audience, there is absolutely nothing wrong with that.

"Mrs. Harris Goes to Paris" is in theaters July 15. Watch a trailer via YouTube.