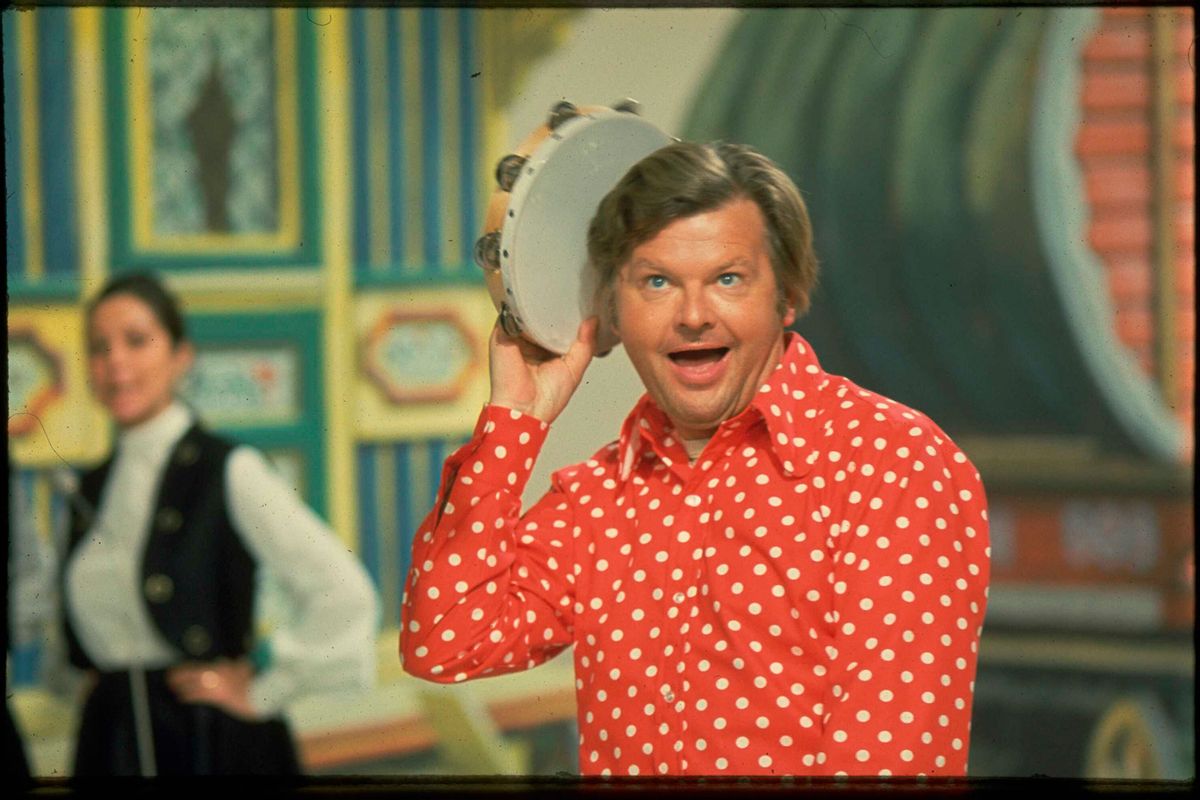 Comedian Benny Hill performing with a tambourine on set, circa 1971. (TV Times via Getty Images)
--

We're frequently reminded of the "special relationship" America shares with Britain, a concept that takes on another meaning in a political context versus that of popular culture. But the two often synchronize beautifully, as we saw this month.

July is bookended by Boris Johnson's resignation from his position of Britain's prime minister at its start, with the Jan. 6 committee hearing in which footage of Sen. Josh Hawley, R-Mo., cowardly fleeing insurrectionists he courted outside the Capitol building on Jan. 6, 2021, made its debut serving as its closer.

Neither of these events is naturally comedic . . . until you add a soundtrack. And this is where that so-called "special relationship" comes into play, since the device most popularly used to satirize and shamed each man is the same: Boots Randolph's "Yakety Sax."

Popularly known as the closing theme to "The Benny Hill Show," a classically British TV sketch show, "Yakety Sax" is an American-born tune that has enjoyed popularity in some form since the early 1960s, both here and abroad.

Randolph, a Kentucky-born saxophone player and musical legend who died in 2007, was central to the development of the "Nashville Sound." His 1963 release of "Yakety Sax" made it a novelty pop hit.

Once Hill adopted the tune as his show's closing theme, playing it underneath sped-up footage of him and other cast members (including scantily clad women) running around all willy-nilly, "Yakety Sax" zipped around the world. It has popped up in sitcoms and animated series and been written into dramas such as "V for Vendetta" along with genre favorites like "Doctor Who."

"There's a punchline in the melody," said Steve Milton.

YouTube is awash with outtakes from horror and action movies, along with local news footage and politicians' gaffes, all set to Randolph's frenetic melody. It lends a gentle madcap, somewhat cognitively dissonant vibe to everything from the climactic shootout in "Scarface" to footage of escaped llamas.

All of which is to say, Americans and Brits have long understood "Yakety Sax" to be the universal theme of lunacy and fecklessness, regardless of whether a person has seen "Benny Hill" or even knows who he was. And that leads us to wonder what it is about this tune that lends it the ability to inject hilarity, appropriate or otherwise, into everything from the benign to the enraging, including the most abhorrently violent movie scenes imaginable.

Jason King, the Chair of New York University's Clive Davis Institute of Recorded Music, has a few theories. King was first exposed to "Yakety Sax" through "The Benny Hill Show," which he watched as a kid growing up in Canada. He sees "Benny Hill" as the main reason people associate the melody with "farce, madcap humor, and zany high jinks."

"But I also think there's a couple of reasons why the people who put 'The Benny Hill Show' together even used that song," he said in a recent interview. "On a compositional level, it almost sounds like compositional slapstick. Because you've got those musical slides where he's anticipating the down beat. It's almost like the sound of somebody slipping on a banana peel."

Steve Milton, a musicologist and co-founder of the innovation and experience design studio A_DA, echoes this while viewing the tune as a cultural signifier.

His first exposure to "Yakety Sax" was via memes, not "Benny Hill." But it didn't matter that he hadn't seen that show before hearing the song because its comedic association was already established in other contexts, particularly TV comedies such as "The Simpsons" and "Family Guy."

He likens the sonic branding power of "Yakety Sax" to that which we assign to John Williams' theme to "Jaws." That music was written expressly for that movie, he explained, but it ended up branding all sharks. "When we want to communicate that there's danger in the water, probably a shark, all you have to do is –" he then sings a few of those ominous two notes that have haunted nightmares since 1975, dun-dun . . . dun-dun, before finishing with, " – and then everybody knows what that means, right?"

There's the auditory impression of the saxophone itself, which King describes as a kind of barreling, bawdy instrument. Factoring in the melody, he said: "There's a simplicity to it, or maybe a simpleness to it, that is also part of the allure of that song. "

Milton agreed. "The melody itself is almost like a chitter-chatter, playful laughter kind of thing," he said. "There's a punchline in the melody."

Now, on top of that simplicity, layer the song's breakneck tempo. "It's just a perfect storm for that song to be considered something that basically has become like a musical condiment, like hot sauce," King said. "You just put it on, and it just makes anything funnier." 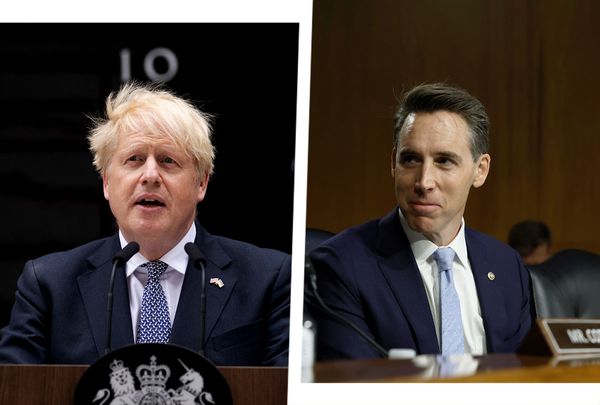 "Just by playing the song and juxtaposing it to what's happening, you're also making a kind of commentary about the implied failure of the participants, or what they did or didn't do in terms of leading the country or not leading a country," King continued. "So you play it as a kind of slapstick, but you're also making a comment on the nature of failure itself, right? The fact that, you know, these people have kind of slipped on metaphorical banana peels on many levels, and worse."

That made it an appropriate theme for Johnson's July 7 departure, as actor Hugh Grant surmised. He tweeted a request to activist and Anti-Brexit campaigner Steve Bray to blast "Yakety Sax" outside the Houses of Parliament while the proceedings were underway.

When the music was met by newscasters' attempts to cover this anxious moment with seriousness and dignity, the result was magical.

The same was true of the song's usage behind previously unaired footage of Hawley running from the same violent insurrectionists he had riled up earlier by raising his fist before entering the Capitol. Nothing about what committee member Rep. Elaine Luria, D-Va., said about Hawley is funny. As she pointed out, he riled up the group that went on to brutalize Capitol police and storm the building's halls.

But as a loud champion of He-Man masculinity fundraising off the photo of him raising his fist in solidarity with the people who hunted for him and his colleagues not long afterward, the footage reveals his hypocrisy and wimpiness. That called for yet another "Yakety Sax" reprise. "Yakety Sax" wasn't the only tune used to ridicule Hawley's sad dash, but it popped up in several social media feeds because it simply must.

Like many repurposed inventions, "Yakety Sax" has a straight-faced origin story.

In the late '50s, Randolph collaborated with guitarist James "Spider" Rich on an early version of "Yakety Sax" that was inspired by the hit "Yakety Yak" recorded by The Coasters. The song eventually led to Randolph signing with RCA in 1958, but that recording failed to break through. Only after Randolph left RCA for Monument, which re-released the song, did it become a popular hit. It remained on the charts for a year, peaking at No. 35.

Even for the most skilled saxophone players, "Yakety Sax" is highly challenging to perform.

Watching archival footage of Randolph playing his signature hit solidifies how serious of a tune it is.

"Yakety Sax" has been adapted by guitarists – Chet Atkins recorded a version he dubbed "Yakety Axe" – but there's a significant difference between shredding a stringed instrument with one's figures and employing that same level of dexterity and acuity to a woodwind. Even for the most skilled professional saxophone players, "Yakety Sax" is highly challenging to perform. Randolph's singular athleticism in performing the tune regularly for decades is an astonishing feat of precise breath work and fast finger placement.

Subtle musical cues woven through the composition keep it light without us even noticing why. One of the two references inserted into "Yakety Sax" is taken from Julius Fučík's "Entrance of the Gladiators," an early 20th-century song originally written as a military march that ended up becoming popularized by circus bands. If the original runs in Randolph's song didn't automatically register as humorous, his sending up a melody associated with clowns surely does.

Speaking with the Associated Press in 1990, Randolph embraced "Yakety Sax" as his trademark. "I'll hang my hat on it," he said. "It's kept me alive."

One wonders whether Randolph would be tickled to know that piece of his musical legacy maintains the uncanny ability to blunt the scary or unpalatable, thanks to a melody that disguises its difficulty in absolute absurdity.

"From all the cultural stuff to the intrinsic qualities of the music itself, there's a lot a lot there," Milton said. "Why it has such staying power is because it works so well to communicate the things that are supposed to be communicated."