Artist are more than their heydays. Work produced in the so-called twilight years can add so much to their legacy 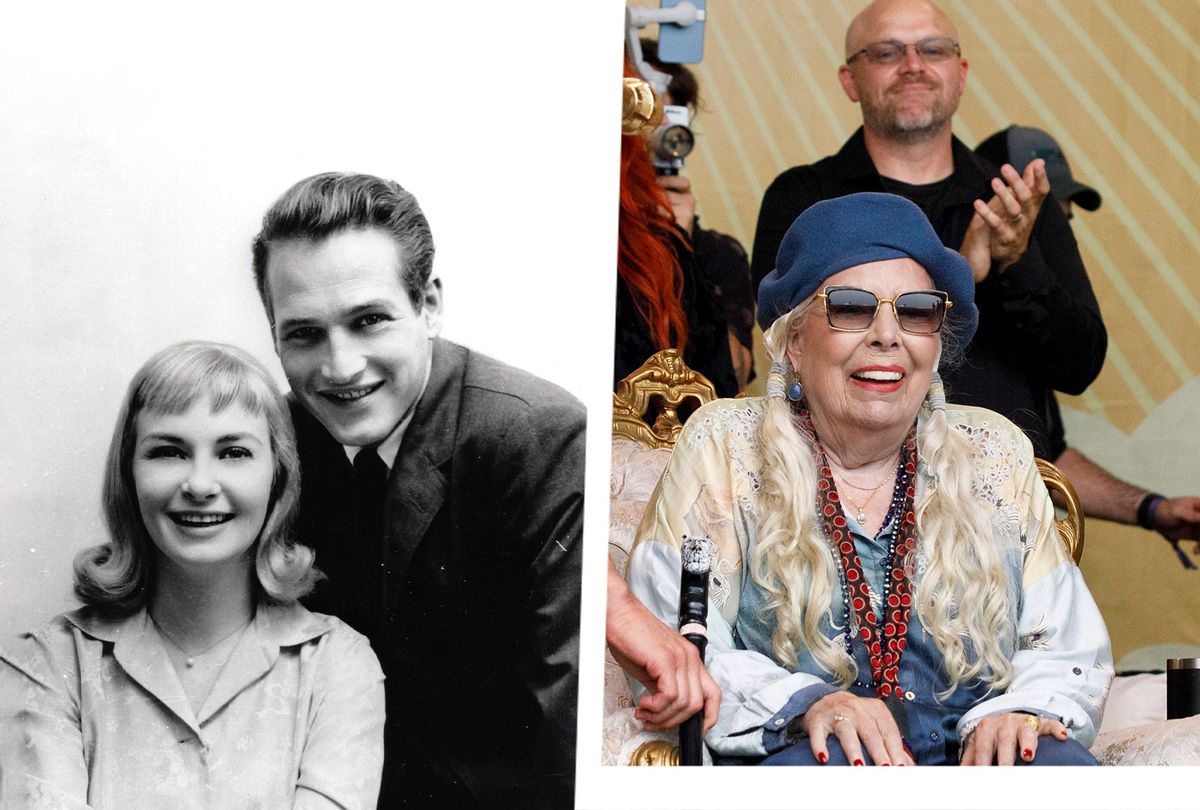 This past weekend, there were two pop culture events that began a conversation about celebrity and aging, the star image and legacy: the recent release of "The Last Movie Stars," the documentary series about Paul Newman and Joanne Woodward, and Joni Mitchell's historic performance at the Newport Folk Festival on Sunday, July 24.

So often, notable figures such as Newman, Woodward and Mitchell are frozen in the public consciousness at the peak of their popularity, and especially at the height of their youth and beauty. It can be hard for artists to stay relevant as they grow older because physical appearance is such a major part of their star power. But the HBO Max docuseries and the festival performance prove the error in valuing celebrities only at their so-called "peak."

"The Last Movie Stars" is an intimate look at a storied marriage between two acting legends, spanning nearly six decades in Newman and Woodward's award-winning careers. Directed by Ethan Hawke, the six-part series chronicles their lives and marriage via the transcribed interviews of the couple's friends and peers (George Clooney voices Newman, and Laura Linney narrates as Woodward).

Woodward won an Oscar for "The Three Faces of Eve" two months after their marriage in 1958, but ultimately Newman became the more celebrated of the two, regarded as one of the most beloved icons of cinema, his iconic status amplified by his startling handsomeness and sparkling blue eyes. Meanwhile, Woodward's fame largely derives from being one-half of a remarkably enduring Hollywood marriage.

It can be hard for artists to stay relevant as they grow older because physical appearance is such a major part of their star power.

"The Last Movie Stars" chronicles how, despite the rosy view of their relationship, offscreen the pair struggled with navigating Newman's rise in stardom coinciding with Woodward's downward trajectory, as well as the actor's alcoholism, infidelity and the tragic death of his son. When faced with so many personal travails and challenges to their marriage, what seemed to keep them together was not just their mutual passion for one another, but also their chosen profession. They obviously adored working together, as evidenced in the fact that they collaborated on 16 films, sometimes as co-stars, and other times with Woodward as star and Newman as director.

But it is the final episode, dedicated to Newman and Woodward's vital work during their final years in the spotlight, that makes "The Last Movie Stars" such compelling viewing. Until the very end, the two were still seeking new challenges in film, television and theater, including their final movie collaboration in 1990's "Mr. and Mrs. Bridge." (Newman passed away in 2008 from cancer, and Woodward was diagnosed with Alzheimer's one year prior to his death.)

Hawke has noted in interviews promoting his docuseries that Newman and Woodward are a rarity among film stars, in that their careers continued long past the time when they first became successful. While their acting school peers such as Marlon Brando, James Dean and Marilyn Monroe are largely tied to the era of their stardom, Newman and Woodward were unique in their longevity, appearing in TV and film projects into the late '90s and early 2000s.

As Hawke points out in a Letterboxd interview, it is impressive, even wondrous, to consider that Newman's career spans filmmakers from Hollywood's Golden Age to the modern era of Pixar and HBO. Woodward, for her part, ventured into television long before the A-list would view the small screen as viable for their careers. She appeared in several TV movies about topics of social importance which won her Emmy Awards, including the 1985 TV movie "Do You Remember Love," in which she portrays an older woman living with Alzheimer's, and how her decline impacts her and her family. The docuseries shares that Woodward bravely took on the role because her own mother had Alzheimer's, a disease the actress would sadly also be diagnosed with two decades later.

Woodward also mentored other young actors (including Linney) and served as the artistic director of a Connecticut theater company. Woodward also encouraged 78-year-old Newman's triumphant return to the stage in 2002's Broadway revival of "Our Town," more than 50 years after the two started out in theater.

This kind of adventurousness and risk taking in the twilight of the acting couple's careers, when the pair could have easily rested on their laurels or devoted themselves to their prolific philanthropic work, shows how limiting it is to evaluate stars solely through the lens of nostalgia. A peak performance can happen at any age — as Joni Mitchell made clear during her surprise performance at the Newport Folk Festival.

The return of Joni Mitchell, the music great who's always relevant

The 78-year-old Mitchell's performance, her first in nine years after suffering a brain aneurysm in 2015, showcased an artist transcending the challenges of aging and serious health issues. Mitchell is no longer the twentysomething singing in a high-lilting mezzo-soprano. Instead, her voice has greatly deepened, yet her talent and musicianship has not wavered.

At the festival, her performance of classics such as "The Circle Game" and "Both Sides Now" had a new, emotional resonance, as many of the tracks gracefully engage with the unceasing nature of change and passage of time. To hear music written in the full blossom of her youth, yet performed with a weightiness and knowing perspective from having weathered so much in her life, arguably gave these songs a greater power than when they were first recorded.

"We're captive on the carousel of time," Mitchell sings poignantly in "The Circle Game." "We can't return, we can only look behind from where we came." Even if time is continuously moving forward, we as an audience do not have to remain fixated on what came before.

One aspect of achieving longevity in a career in entertainment is that endurance is rewarded with canonization: performers are lauded with tributes and lifetime achievement awards, then placed high on a shelf as a relic of the past, removing them from the current pop culture conversation.

As a culture, we have a tendency to "only look behind" at celebrities who continue to work past retirement age.

Mitchell mused about this herself in the 2003 documentary "Joni Mitchell: A Woman of Heart And Mind." She said that the day after she won several Grammy Awards for 1994's "Turbulent Indigo," she read a newspaper article titled "Singer/Songwriters: Then and Now," and was irritated to see that she was consigned to the "then" category.

"I did some interviews and they go 'you're that folk singer from the sixties,'" she added. "And you dummy, we're in the nineties now, and I just won three Grammys. Doesn't that make me an artist of the nineties?"

Even if Mitchell is mostly remembered for her iconic work in the '60s and '70s, she remained productive through the mid-2000s, just as Newman and Woodward did. As a culture, we have a tendency to "only look behind" at celebrities who continue to work past retirement age.

There are some exceptions, but only due to the sheer prolificness of artists in which we have no choice but to regard their careers in full. When actor Christopher Plummer passed away at age 91 in 2021, he left behind a lengthy filmography including an Oscar win at age 82 for "Beginners." One his most definitive roles happened to be his final film role in "Knives Out," which was released two years before his death. So while he was beloved as Captain Von Trapp in 1965's "The Sound of Music," Plummer is also well-remembered for other performances beyond that one massively popular character.

The late Cicely Tyson's acting career spanned seven decades, with the actress working steadily in movies and TV until her death last year at age 96. She received an honorary Oscar in 2019 and won two Emmys for her monumental body of work, and her final role was also one of her definitive ones as well, a scene-stealing recurring role in "How To Get Away With Murder." Tyson's long career meant she was making new fans who were not yet born when she had her breakthrough in 1972's "Sounder," which garnered her sole Oscar nod

Similarly Jean Smart, whose career was for so long defined by her work in the 80s comedy "Designing Women," had a resurgence that began a few years ago with F/X's "Legion," then HBO's "Watchmen" and "Mare of Easttown," and culminating recently with her Emmy Award-winning role in "Hacks." The 70-year-old actress has been a vanguard in demonstrating that performers, especially women, can have careers of vitality and substance in the later decades of their life. But that is only possible if gatekeepers and viewers can give the same kind of opportunities and attention to older performers that is bestowed on their younger counterparts.

And as gratifying as it is that these actors have had enduring careers similar to Newman and Mitchell, this pair's status as legends can also have a stultifying effect, keeping them frozen in amber no matter their artistic output. The combination of their star image, in which their rarefied beauty plays an important role, coupled with their seminal performances from decades earlier, means their later work is not always given equal weight. The charming hunk in "Cool Hand Luke" or the beautiful, blond songwriter behind "Blue" will always loom larger in the public consciousness, understandably so. But that doesn't mean everything that occurred decades later should be treated as a mere afterthought.

One of the most meaningful aspects of Mitchell's festival set is that she was able to experience firsthand the love and appreciation from audience members and fellow performers alike, the equivalent of a warm embrace from all who count themselves as fans of her work. All too often, important women artists are not quite given the recognition they deserved in their lifetimes.

All too often, important women artists are not quite given the recognition they deserved in their lifetimes.

This has been made clear in "The Last Movie Stars," as some viewers have to confront the fact that we primarily know of Woodward due to her storied marriage versus her illustrious acting career, and she never truly received the celebration of her achievements she deserved. (Nothing quite exemplifies this more than when the couple were recognized together at the 1992 Kennedy Center Honors, which saw the highlight reel introduced by Sally Field heavily weighed towards Newman, while Robert Redford mostly directed his remarks at his "Butch Cassidy and the Sundance Kid" co-star.)

I imagine many will try to rectify this and catch up on Woodward's work, although it's unclear if interest in the docuseries will lead to more of her oeuvre being made accessible. But one of the reasons that Mitchell's Newport set became instantly iconic is because rather than seeing her feted at a lifetime commemoration event, her songs covered by those who idolize her while she watches offstage, Mitchell herself was the headlining performer and center of attention.

In providing a new interpretation of her own work that stems from the passing of decades, Mitchell demonstrated her continued viability as an artist, firmly placing herself back in the "now" column.

In watching "The Last Movie Stars" and Joni Mitchell's set at Newport within the span of a few days, it was hard not to be inspired by how the trio of artists continued to strive to reach new heights as they got older, rather than being content with past accolades. And it means we should resist doing the same. We should reward an artist's longevity with a more open-minded perspective about their work, as their longevity is also a gift to us.

about celebrating artists as they age:

Kirthana Ramisetti is author of two novels, “Dava Shastri's Last Day,” which was selected as a “Good Morning America” Book Club Pick, and “Advika and the Hollywood Wives,” which will be published in April 2023.