This vegan-friendly version of chili mac is packed with flavor 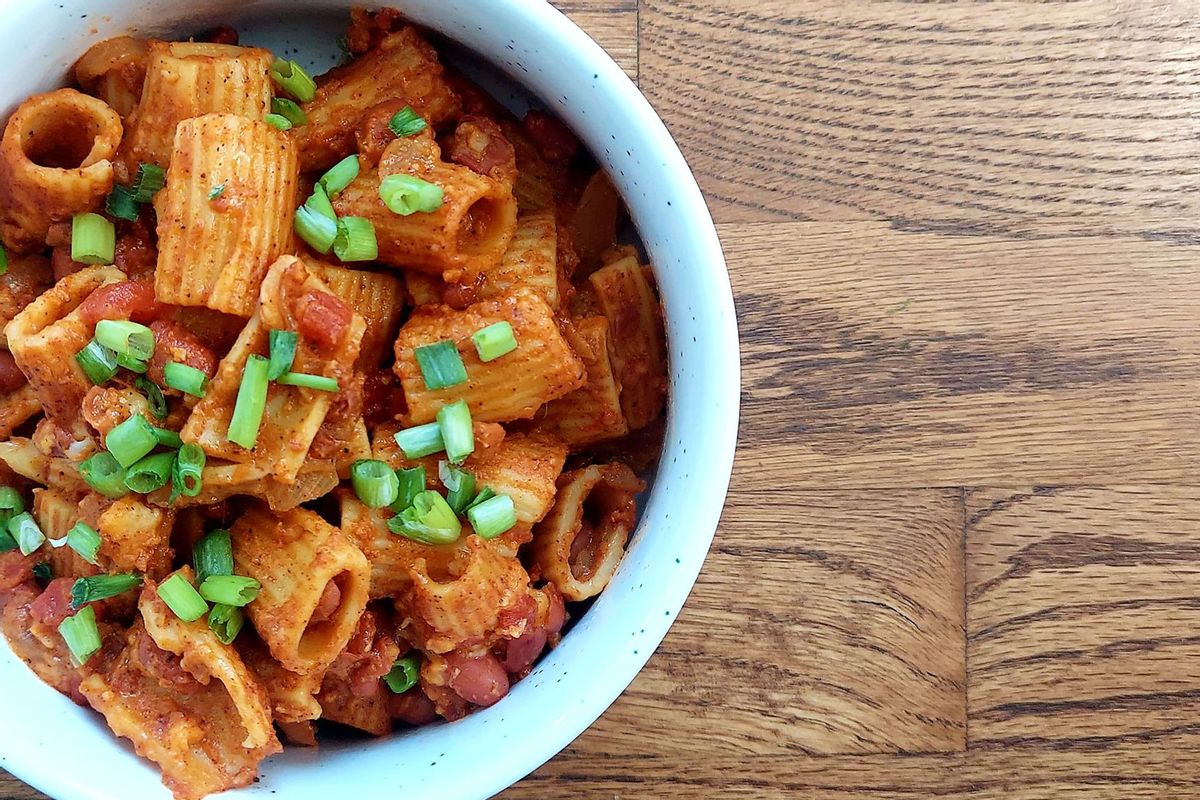 Recently, I ate a plate of carbonara that seemed blessed by heaven itself. I was sitting at a tiny two-top on the sidewalk patio at Via Carducci La Sorella, a cozy neighborhood Italian joint in Chicago's Wicker Park. When the waiter brought out my pasta — thin spaghetti enrobed in a golden, yolky sauce and flecked with crisped pancetta — I swear that a sunbeam broke through the early evening haze and shone directly onto my plate.

It was as if God was indicating his approval for the dish in all its delicate, opulent glory.

Meanwhile, I had spent the previous afternoon recipe-testing red bean chili mac, a dish that had me revisiting my colleague Mary Elizabeth William's recent conversation with Nigella Lawson about the allure of "brown food."

Nigella Lawson: "Cook for yourself. No one else is going to judge you."

As you may know, chili macaroni, or chili mac, is a one-pot meal typically made with ground beef, pasta, tomato sauce and cheese. A Hamburger Helper version became one of my peak comfort foods in college because it was not only cheap and filling but also riffable. I wasn't eating meat at the time, so I substituted the ground beef the box called for with a can or two of red kidney beans. In addition to the price point, I loved the beans for their firm yet creamy texture.

In recent years, I've shifted towards making a homemade version that hits all the same nostalgic flavor beats of the boxed variety. It really amps up the smokiness and the spice, while also making room for an entirely vegan version. That said, it's not exactly a "pretty" dish in the manner of, say, a verdant salad or slice of strawberry cake.

You can, of course, zhush it up with a little pop of green by way of chopped chives or scallions (which I heartily recommend). At its core, however, this dish is beige pasta, ruddy beans and a golden-brown cheese crust. Brown on brown on brown.

While heaven didn't immediately open up to cast an approving ray of light in the direction of my most recent batch, I have a feeling that Lawson (who is a culinary goddess in her own right) would approve.

"No, they're not the most photogenic," Lawson told Williams regarding brown foods. "There are times when you just want food that has got the sort of uncontained texture that just goes all over the place. And the texture is what people don't like the look of, but actually, when it's in your bowl, you're not expecting it to look picture-postcard pretty but it has a beauty of its own. It's just not perhaps sort of, 'Oh, grab me, look at me now.'"

She continued, "Some food doesn't need to draw attention to itself. It just has to be there, and there are certain moods when you just want something that tastes good but it doesn't demand something of you. You don't have to be equal to it. It's there to soothe and to comfort and to bolster."

This red bean chili mac will certainly do all those things, especially as we shift into cooler, perhaps gloomier, weather.

If you're reaching for plant-based cheese, make sure to grab one that melts well. (I'm partial to the Violife Cheddar Shreds.) In terms of plant-based milks, oat milk has the right texture and flavor to mimic whole milk. It's what I'd personally recommend using here, but any neutral-tasting milk works.

Feel free to replace the called-for spices with store-bought chili seasoning to taste.

This recipe calls for a stove-to-oven transfer to get a cheesy "crust" on top of the pasta. If you're running low on time or energy, feel free to skip this step. It's just as delicious as a one-pot, stovetop meal.