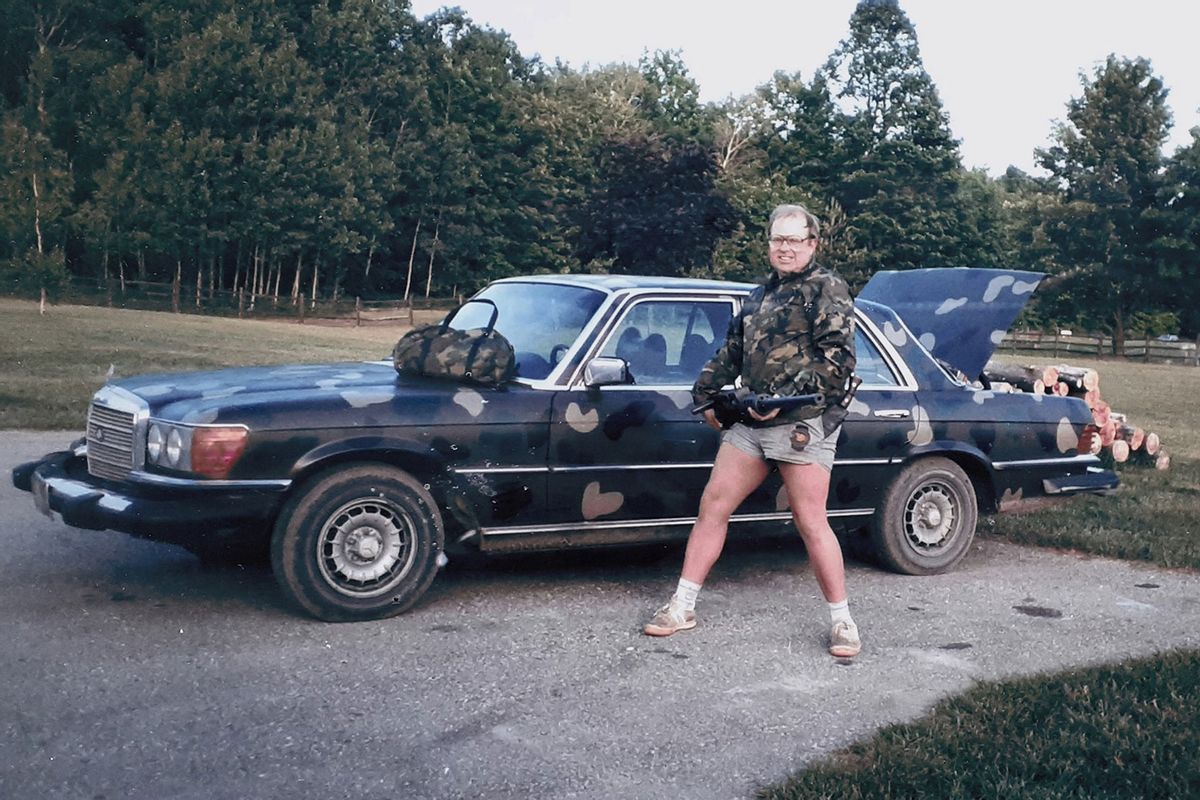 It is easy to see why director Ramin Bahrani was interested in Richard Davis, the subject of his fascinating documentary "2nd Chance." Davis managed to create — and destroy — an incredibly lucrative business making bulletproof vests for the military and police. And this was after he had a gunfight with two robbers and lost his pizza business to a fire.

"He was a force of nature in way — and not always for good."

Davis boasts about shooting himself in the chest nearly 200 times — and he has plenty of footage of this to prove it. He was a businessman who published "sex and violence" catalogs to hawk his products and dabbled in filmmaking, creating promotional videos recreating the experiences of cops whose lives were saved in the line of duty thanks to his vests.

But Davis has also endangered as many lives as he has saved. As much as he was about protecting others, he was clearly protecting himself first and foremost, from trying to get a troubled youth to spin a story to take the blame for something Davis was responsible for to covering his ass when there were manufacturing issues with his vests made out of Zylon.

"It's time for change": New Orleans' Big Freedia on working against gun violence in new documentary

Davis is happy to recount his life to Bahrani, peppering his anecdotes with corny jokes and wild comments or outright lies as well as deflecting some of the tougher questions. As Davis' two very candid ex-wives and other folks who knew him introduce contradictions in Davis' statements, "2nd Chance" reveals more about a man who becomes more questionable the more he talks.

Salon chatted with Bahrani about his new documentary and its quirky subject.

Let's start with an icebreaker. Would — or did — you test the effectiveness of a bulletproof vest by shooting yourself in the chest with a gun? Why or why not?

No. [Laughs.] Because I'd be afraid I would miss — which happened by the way. There was a moment where Richard was testing the vest and he wanted his son to shoot him. His son didn't want to do it, so he wanted Aaron, the police officer [featured in the film] to do it. Aaron shot him, and it actually penetrated because Richard had not fastened the vest properly, so it ended up dinging off the side, and the vest flew off and it hit him. He had to go to the hospital, and he had to make up a whole story about how it happened. I completely forgot about this! He had to say he did it himself, because if he said Aaron shot him, they would open up a police report. This is a lie I can understand.

How did you learn about Richard's story and how much of it did you know before you started filming?

I didn't know anything about it. I was editing "The White Tiger" and the producers contacted me and presented me with the material as a concept for a fiction film. I spent a few days looking at the documents. The archival video convinced me to try it as a documentary and not a fictional film. There were certain themes that resonated with me.

What did you admire about Richard? What appealed to you about him — not as a subject, but as a person?

He's charming, and strange, and funny, and inventive, relentless, and always moving. He was a force of nature in way — and not always for good. What he did is kind of amazing. In his basement, as a broke, out-of-work pizza guy, he invented the modern-day bulletproof vest from his own ingenuity. He had only one year of college but studied in that field. That is something to admire.

"I met a man with a barrier of cognitive dissonance around him, and self-deception and mythology."

But really, it was the fact that he put a gun to his chest and shot it to prove his device works. It reminded me of the Wright brothers who flew in their own plane, or when an engineer stands under their bridge and says, "Drive something over it, and I will be here, or I will be crushed if I have failed." I give him a lot of credit for that. Richard saved thousands of lives. He also cooked us very good chili and mac and cheese and cookies. He didn't do it to sway us. He has a folksy charm to him. He exaggerates it in his moviemaking and his myth-making. And he also did things that are amoral, and he has philosophies about life that I find repugnant.

I liked how complex he was. Richard is "a narcissist" and "needs to be loved," as some interviewees express in the film. Why do you think he wanted to be filmed, knowing that he had some difficulties that would come to light?

I think you already said the answer. Some things he said were philosophically so vile and extreme I cut them out.

You reveal contradictions and his dubious efforts to protect himself with information that he claims but cannot prove, or the outright lies he told. Do you think Richard has a difficulty understanding the difference between reality and fiction? Is he that much in denial?

This is one of the things that interested me the more I came to know Richard. When I first met him, I thought he was going to go deep into his soul and tell me about some of the mistakes he made, and the regrets he had. But he didn't do that. He didn't seem to think he had done anything.

So instead of meeting that man, I met a man with a barrier of cognitive dissonance around him, and self-deception and mythology. And I would go back to the hotel and think, "What am I going to do? There's no movie. He doesn't want to talk about those things." Then I realized, that is the film. I just needed more characters to put around him to contrast him and complement him and tell a different version of what he says, to juxtapose his philosophical views, and comment on his emotional state. That is how the film was made.

Yes, Richard's corny humor is appealing, but I was angry when he asked Tim, a teenager, to take the blame for something Tim didn't do because owning up to it would cost Richard money.

It's funny you mention that, because that [incident] bothers me more than the Zylon case. I can see the weight Richard was struggling under with Zylon — doing a recall, not doing a recall. But I understand how difficult it was for him. But that teenage kid, I find that terrible. Tim was very inspiring to talk to. I like how Tim talks about yin and yang; Richard was a bad influence in my life, but he was a good influence on thousands of other people. I was amazed that Tim had the empathy to say that when 10 minutes earlier in the interview, he was shaking from nerves from something that happened to him 20-30 years ago.

I find there is this idea of economy in all your work. It is not just the economy of style you showed in early films like "Man Push Cart," "Chop Shop," or even "Goodbye Solo," but ideas about economics as a subject matter in "At Any Price," "99 Homes," and "The White Tiger." Can you talk about that theme in your work? "2nd Chance" certainly features both the economy of style and the subject of economics.

I'm interested in economics as a force in our life. It's not something that's tackled often enough in movies, but it's what impacts the majority of our population on a day-to-day basis. They struggle to afford their daily needs, healthcare, a vacation, or have the ability to perhaps pursue their dreams. In films like "99 Homes" or "Chop Shop," the struggles with identity and morality come out of economic necessity. Here what I find different and interesting is in "99 Homes," it's: "This system is rigged. I'm going to play by the games of a rigged system, so that I don't get destroyed and instead I will succeed. And it seems like I'll be rewarded for doing these illegal things because that's the way the world is."

In this film, Richard does not seem to say that. He thinks that he has always done the right thing, and that he has never done wrong and that whatever he has created — the success the money, the incredible invention, the movies, the fake history of the past, his own mythological origin story, is all real and good. That cognitive dissonance, that self-deception to me, was something new that I had not thought about putting in any of my fictional films. And then it seemed to be a metaphor for our country, and the political state we're in, and some of our leaders.

What observations do you have about gun culture? Have your thoughts changed after making this film?

I've shot guns. I don't own a gun, hunt, nor am I a gun enthusiast. It is certainly a complicated subject, and what was very strange to me is that Richard lived in a cabin with a lot of guns. I mean a lot — not just pistols; all kinds of firearms, rifles, tracer bullets, and when he opens the door to his cabin and takes five steps, right there in his yard is a shooting range. That is incredible, and I found it personally disturbing.

Kathleen, who is Richard's second ex-wife, said it so eloquently when she looked at the beautiful acres of nature they have there all around them. Richard and his buddies would show up with all their cannons, and machine guns, and ammo and their firebombs, and she said, "It was like, the profane had been plunked down into the center of sacred," the sacred being nature. It was just so profound. I don't think I could say it better than that.