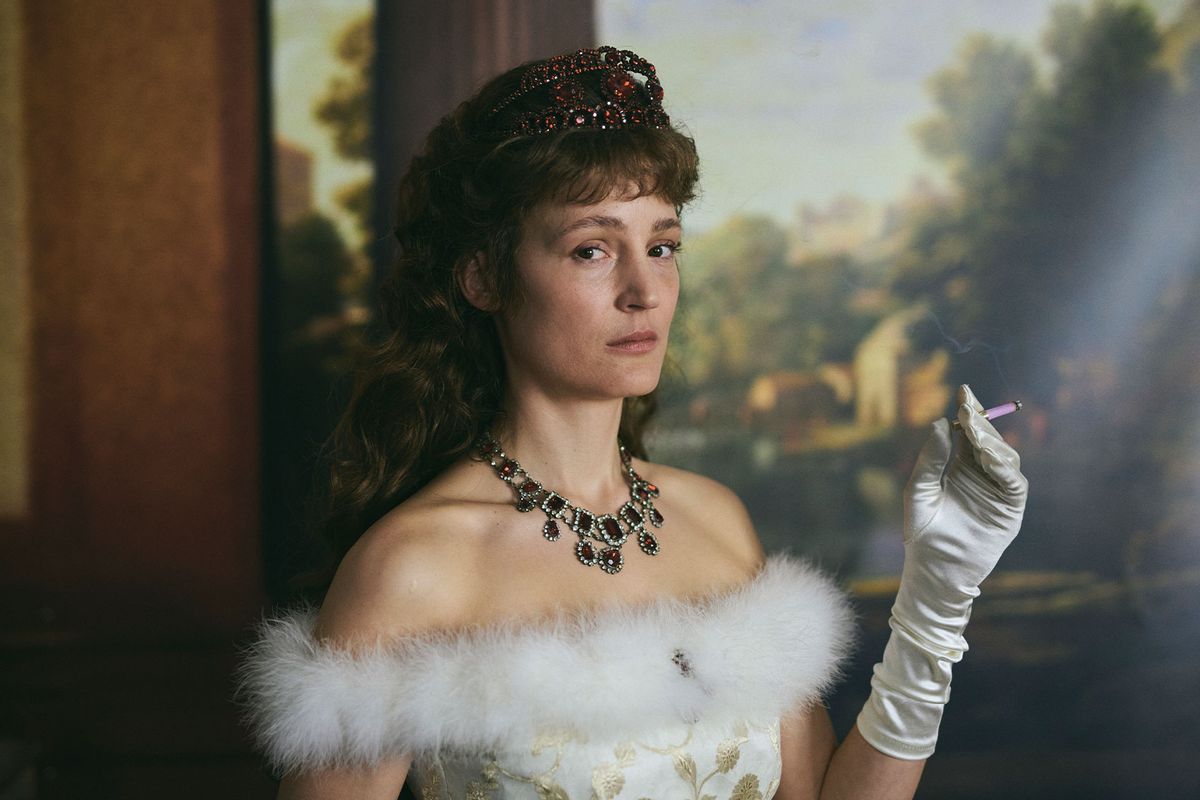 Vicky Krieps is getting Oscar buzz for her sensational performance in "Corsage," as Empress Elisabeth of Austria, aka "Sissy." This gorgeous, historical drama written and directed by Marie Kreutzer, reimagines a year in the Empress' life as she grapples with criticism and gossip that largely concerns her flirtations with her riding instructor, Bay Middleton (Colin Morgan), as well as her husband's mistress.

"I read her biography, and I could feel from what I was reading, there was something else between the lines. . . . She might have been sad or depressed."

Krieps reveals layers about Elisabeth as she puts on a blank public face but is a very different person in private. Her efforts to navigate her relationship with her husband and children certainly test her patience. In contrast, her visit to a local mental hospital shows her compassion for a woman in restraints as well as a wounded soldier with whom she shares a cigarette in his bed. Whatever the situation, the Empress' behavior runs very contrary to what is expected of her, which is what makes "Corsage," and Kriep's performance so appealing.

Kreutzer's film features fabulous period costumes and décor, but some scenes have a very contemporary and anachronistic spin, as when Kris Kristofferson's "Help Me Make It Through the Night," is played in one scene.

The actress spoke with Salon about her portrayal of Empress Elisabeth of Austria and making "Corsage."

What decision did you make about Elisabeth's character and playing her? She is obviously flouting convention and expectation. How did you decide to portray her as she "indulges every whim without considering her position," as one character remarks?

Emotionally, I knew what I was going for with the character for a long time. I proposed the idea to Marie [Kreutzer] to make a film about Sissy because when I was 15, I read her biography, and I could feel from what I was reading, there was something else between the lines. I would think, why was she doing this? She might have been sad or depressed. I was too young to understand, but I think intuitively, I always felt a certain darkness that attracted me. Emotionally, I felt close, and I didn't feel the need to really construct the character.

Elisabeth certainly felt despair in her life. There are concerns she can't care for herself. You mentioned depression or sadness. Do you think there was an element of mental illness or madness? "Corsage" reminded me a bit of "Spencer" in that it was "trapped royalty." Thoughts?

I think I let her come close to me. I let it become real, having myself speak through her as well. When I act, I think it's important to make it relevant for the audience and to connect it to a real moment. As a woman, I can feel the same frustration, of course, and as an actress, I oftentimes feel frustrated because people want a certain image of me or they try to define me as a woman or, who I am. So, I feel trapped too sometimes in my role. The role of the actor, the role of the mother, the role of the wife, the role of the lover. Oftentimes, I feel I can't let go and just let myself come out. I think that what you feel in these rebellious parts is Vicky rebelling against her role as the actor having to play the role of the Empress.

What observations do you have about her vanity and the importance of look or image and the "duty to represent"? How did you create the regality of the character?

The vanity — you pointed out her madness or sickness. What interested me in telling her story, to talk about today, is the social vanity that we are all tapping into now with Instagram and having this over-awareness of our image. She had that at 15. She was said to be the most beautiful woman in Europe, and they handed out hand-painted portraits. She was very aware of her image. I think being so aware of your image can drive you mad. A certain madness can come if you are always being looked at, seen and commented on. That speaks to the audiences today. 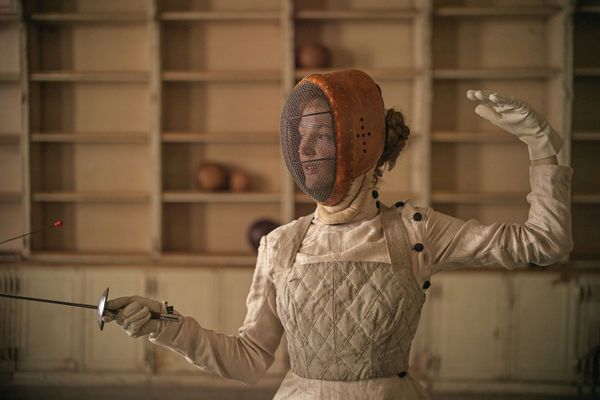 The costumes, the fencing, and the horseback riding are different ways of performing in various different situations. To me this is very much a film about "performance."

"The vanity — you pointed out her madness or sickness."

That's very me and very personal. On one hand, I am a perfectionist. I love to learn something. I am very serious when work. I did tremendous preparation. I did my homework very well. I learned Hungarian, I did the horseback riding. I learned the fencing and ice swimming, which isn't in the movie anymore, but every morning at 8:00 a.m., I went into the cold Danube with a trainer. I couldn't believe what I was doing! I read all her books, all her poems, all her diaries as well as the diaries of her daughter and her ladies-in-waiting to really get as close as I can to anything like the reality. But knowing that there is no such thing as reality — we ourselves, don't know who we are, so how can we ever know who someone else was.  This is the construction. At the same time, I was taking the piss out of my own construction, to make it about "play." Otherwise, my performance becomes showing you how well I did my homework. I look like Sissy, don't I? I find this not very interesting. I want something else to happen, so the audience feels something.

This is why I don't like Meryl Streep. She's all about mimicking, but that's all her performance is. There's no depth to it. I want to see, what you call "beyond the homework."

I want the risk of failing. I was consciously letting go of some of the perfection to take the risk of having something new happen which the audience might not like — like when I don't talk and am silent. I don't explain her — now I'm angry because . . . or now I was sad because . . . Oftentimes, I was sad, but I wasn't crying or showing the sadness. Or giving the finger or sticking out her tongue. It could have not worked. People could think why is she so cold or mean?

I love the scenes where she visits the hospital. She's showing her compassion . . .

That is exactly the tricky part. We go to the mental hospital and show her interest in these women, which was real, but at the same time, she is looking at them like they are creatures in a zoo. She is giving them candies, which is not going to help them anyway. She's caring and compassionate, and real, but, at the same time, she is superficial and cold. That's who she was. We humans are so complex all the time. I wanted to take the risk of showing a woman who is complex before anything else.

This is how I was rebelling as an actress. When we were shooting, I should be focused on the camera and how I look, but I was concentrating on a spider on my hand. And suddenly it went up the sleeve of my dress and into my corset. I started giggling. Colin [Morgan, her costar] was asking me what was happening. I said, "There's a spider in my corset!"

Elisabeth has a very interesting relationship with her husband. Who do you think has the power and control in that relationship, and how does she wield it?

If it was about winning and losing, neither of them were really winning, but unfortunately, he's perceived as winning. I remember playing it, thinking, I never felt like I'm winning. I could surprise him, I could feel the moment I make love to him, and through my love, which is genuine and unexpected, I am much stronger than him. But I never felt I was winning. I only felt I'm escaping, maybe, if anything.

What about her relationship with her children. How did you see her role as a mother? That was also really fraught.

I am a mother myself. It's a personal experience of mine. I am a child; I never grew up and I play all the time. I do get looks from my daughter sometimes, where she's the mother and I'm the child. It was something really heartfelt to me, and sometimes painful because I was reminded of my own life. But in my own life, luckily, I do have the dialogue with my child. Someone like Elisabeth was never allowed to have that with her child. My relationship is ever-changing and shifting and growing. It is a beautiful relationship. But it was painful to know that Elisabeth was never granted the dialogue with her children that she wanted. She was trying to break the rules of how you are supposed to live with children. You are supposed to see them not at all, unless on special occasions. They are raised by other people. She didn't want that. She had her first child at 16. She wanted to raise them and play with them, and they took them from her. That's really when her heart broke. One child died. So, where does madness or coldness come from? It comes from that, but the movie never explains that she's cold because she lost her child.

Yes, I like the ambiguity. It's not just one trauma. It's a combination of things. She was a woman of power who still had little power.

The tone of the film is sincere and yet cheeky. I love the use of contemporary music and anachronism and the ending. Why do you think this was an appropriate approach for telling this story?

I think our movie is a good example of teamwork. Everything happened as we were working. That's how creatives should work. Be open to what comes your way. I adapted my performance to what was happening. I could feel the frustration. It wasn't [saying,] "We're going to make this crazy cheeky movie." The director was not planning a modern take. But it happened as we were going along. Everything felt heavy, and she wanted something lighter. With the furniture, people told her, "You cannot use this chair, it's made 10 years later." And she said, "Why can't I make the movie I want to make? Why can't I show the chair I want to show?" More elements come in. The whole team was taking pleasure in it. People found amazing chairs. Everyone joined in. They got the tone of breaking out of a corset of how to make a movie or tell a story that is period.

Elisabeth has a great line about gossip in the film, "The lion doesn't lose sleep over the opinions of the sheep." What are your thoughts about how "celebrity"— be it an actress or a politician - is treated in the media, especially in this age of social media?

Exactly! To me, that's what I care about — the message that we should be aware of what happens if we listen to the sheep. We should be aware of what happens if you have an oversized image of yourself. Because we then become slaves to opinions of sheep and to our own image. How many likes we get on Instagram. If someone tells me that I'm beautiful or not beautiful. Then we become unfree, and we lose everything that makes humans interesting and alive — our own sense of identity. The whole world is interesting because each one of us has different experiences and is a different person. That's what makes it interesting. We will lose it if we try to please and be liked by everyone.

"Corsage" is currently in theaters.