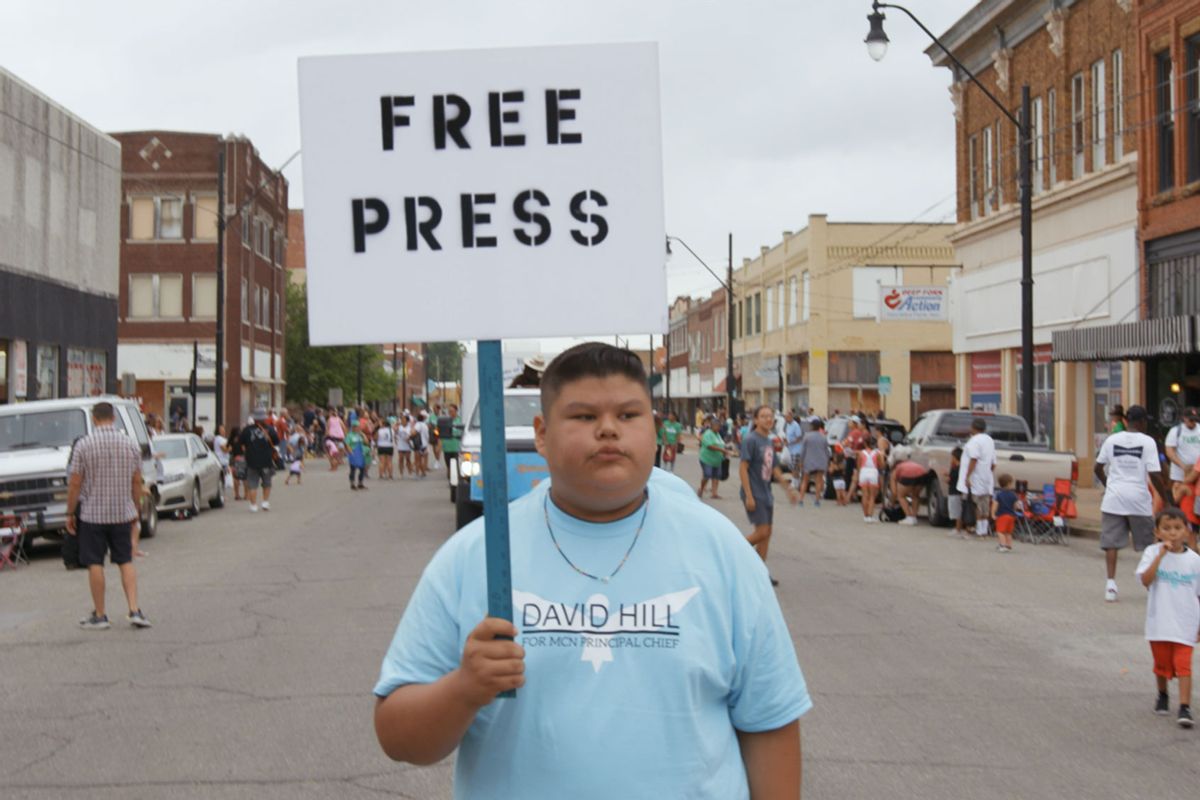 Freedom of the press is not guaranteed for most Native American tribes. As sovereign nations, they create their own laws. In fact, only a handful of tribes have freedom of the press, one of them being the Muscogee (Creek) Nation in Okmulgee, Oklahoma. Well, until 2018, when the Free Press Act is repealed. It turns out that while Muscogee citizens appreciate getting information about the tribal government from the local media outlets, the tribe's elected officials do not want reporting to include their embezzlement schemes or sexual harassment accusations.

"Bad Press," codirected by Rebecca Landsberry-Baker (Muscogee) and Joe Peeler is a cogent documentary that chronicles over the course of several years the efforts of the members of Mvskoke Media — journalists Angel Ellis, Jerrad Moore, and Liz Gray among them — to fight for a free press and transparency and against tyranny by getting an amendment passed to change the constitution. (Something that has never before happened.) The impact of this can change tribal history; the Muscogee would be a role model for all tribes.

In the PBS doc "Storm Lake," a tiny Iowa paper fights for the future of high-quality local news

But the process is not easy. It requires nail-biting elections to ensure a candidate that supports a free press will be elected Chief — and that, if elected, the new administration will enact the necessary changes.

Landsberry-Baker and Peeler chatted with Salon about their film in advance of its premiere at the Sundance Film Festival.

Why did you decide to make a feature documentary about this topic of freedom of the press in Indian country?

Rebecca Landsberry-Baker: I am a first-time filmmaker, but I am a citizen of the Muscogee (Creek) Nation. I actually worked with Angel, Jerrad, and the staff of Mvskoke Media as a journalist. Now I work for the Native American Journalist Association. I am very plugged into journalism in Indian country, and one of the issues we tackle is free press in Indian country. It is a rare issue that a lot of people are unaware of outside of this small circle and community of Native journalists. These are my people. I was serving on the Mvskoke Media editorial board at the time when free press repealed. I can't let this be swept under the rug and let the tribal government win by squashing the story. I wanted to do something so that the journalists' side of the story was told. Having tribal administrators yank your funding if they don't like your coverage is unique to Indian country. My husband, who is a producer on the film, and I talked with Joe and asked is this something doable as a doc? Luckily, he wanted to get involved. I'm excited to feature these subjects and to feature a community that folks have not experienced before.

Joe Peeler: Becca and Garrett our producer came to me on a Monday, and on Friday I was meeting with Angel to start filming. When I met her, it was clear she's the person to fight this fight. She is passionate and intelligent, and funny and snarky and really had the drive to win and try to fix this problem.  She really cares about her fellow citizens. Meeting her, it was automatically apparent that this needs to be a film and she can take us through it. Neither Becca nor I had any clue it would last as long as it did. We were on the ride, and ready to film. But we had no clue if they would win, lose, or how long battle would go on.

Peeler: Working with Becca, we made a good team because she had such a deep, intricate knowledge of free press in Indian country, tribal law, and tribal journalism and how those issues affect citizens. I'm a complete outsider and knew nothing about this topic before I was contacted about this film. I have the filmmaking background, and that combination is helpful for audiences, because If I don't understand the issues, no one will. The process of filming was the process of learning for me. Becca acts as the fact checker. I'm asking her questions as we're interviewing subjects.

Landsberry-Baker: I don't think either one of us, solo, could have made this movie. I had access to the community, but Joe is bringing technical expertise and making a film that was cinematic and exciting. He was often, when we were doing interviews, saying, "I have a white man question to ask," which was helpful. I often speak about the issues with my fellow natives, but to have someone outside the community — because many viewers will be that — was helpful to help clarify things.

Angel was a target for speaking out and lobbying for a free press. Her livelihood was certainly threatened — which has ramifications for her life and family. Can you talk about these issues?

Landsberry-Baker: There were no violent threats, thankfully, but there was political pushback. She was thrown out of a meeting. One of the tribal council representatives said, "You don't belong here." As a journalist and as a citizen of that tribal community, for her to get kicked out of meetings by tribal leadership — that is crazy that it's happening in the U.S. Another tribal council member said, "Report this or else," and she mentions that in the film.

Peeler: We heard from many tribal media journalists in Mvskoke Media and outside of the tribe, that they were genuinely worried about being arrested for doing their jobs. That hangs over journalists' heads in Indian country. Part of the film is a portrait of the paranoia that this situation creates. If the tribal government can step in, what can they do to me? That creates this panic and paranoia that weighs on you. The emotional weight of staying and trying to do your job, and fight the fight — even if they are not busting down your door with guns, or coming in to arrest you at work. For you, and all of the people you work with, that's a possibility.

This is a follow-the-money film as the most powerful men — and they are all men — have the money and influence to affect change with little to no accountability. What can you say about money as a motivating factor in this story?

Landsberry-Baker: You mention threats, and Lighthorse, our tribal police department, are controlled by the chief. If they are told to arrest the journalists at Mvskoke Media, they would do it. Thinking about funding, another looming threat is that if the tribal administration didn't like what the newspaper was reporting, they could pull their funding and say, "Your budget is $1." How do you report on the news with no budget? In Indian country, we're a small community, so it's more important that you have accountability through your tribal media department, so your citizens are aware of what money is coming into the tribe. That is the citizen's money and how money is spent and if citizens are demanding that free press and good journalism and news about their tribal government is essential to them as a service, then they should have every right to that. We have to be able to fund that. It's accountability to how funds from different economic development efforts, including gaming funds from casinos, how are they being spent? The press serves that function. People don't make the connection that free press supports tribal sovereignty. But it does. It provides accountability between the government and the citizens.

I appreciate how the efforts to overturn the repeal prompted citizens to register to vote. What observations do you have about the grassroots mobilization of citizens and the support of the community?

Landsberry-Baker: Our film highlights how important voter engagement in tribal communities can be. Ten votes separate someone from being in a runoff. Being engaged as a citizen and voter is super important; you are part of democratic process and decision-making when you go to the polls. I wish there was greater voter engagement, and I hope our film will showcase that as well, that Indians should participate in their tribal government. It's wild to think that a handful of votes can make all the difference, but they absolutely do in Indian country.

Peeler: One way I look at the film is that it's a portrait of young government that is young enough that one person can change it. Angel is pushing for that change, so when she stands up and speaks out, she creates a palpable ripple effect that you don't necessarily see in a whistleblower situation on the national level. The response from community is immediate and present. Her bravery and putting herself at risk to tell this story that creates waves in this community, and the film tracks how there is backlash and how things change and get more complicated. That lens was fascinating to watch as a filmmaker, seeing that happen in real time.

Landsberry-Baker One more point to add is that Muscogee citizens live in the tribal boundaries, but also all across the nation and around the world. The Mvskoke Media is likely the only tie to or way they are getting information about tribe in California or overseas. The tribal media feel this responsibility to be one of the most important sources to educate Creek voters living in the state of Oklahoma or at large. The printed paper is sent out for free, but they are tuned into social media, the YouTube channel, the radio show, and all of the other avenues.

Do you feel Mvskoke Media has built a bigger, more loyal audience as a result of this battle for freedom of the press?

Landsberry-Baker: I wonder what Mvskoke Media would say, but I think the fact that the tribal government wanted to repeal free press in a lead-up to an election, to me, points to this is an important source of information and news for citizens. The tribal politicians know people are reading it as a primary source about elections and their tribal government. I would love to hear Mvskoke Media's response to hear if they have gained more subscriptions or grown their audience? We might see uptick after the movie.

Peeler: On the ground, I saw that the repeal split some of the electorate. People rallied around the press, but I thought the Muscogee citizens hold their newspaper to a high standard. Jerrad says the repeal decimated trust in the citizens because they are not seeing news stories they know are going on and want to see in the paper. Unfortunately, Mvskoke Media's hands were tied, and they were unable to print those stories. There was tension — will the citizens rally around them or turn on them? We watched that play out in real time which was exciting.

"Bad Press" premieres at the Sundance Film Festival in person on Jan. 22, with encore screenings Jan. 24-27. The documentary will also be available for viewing online Jan. 24-30. Visit the Sundance site for tickets and more information.