Earth's inner core has slowed down — or is perhaps even lagging. Here's what this means for life on the surface 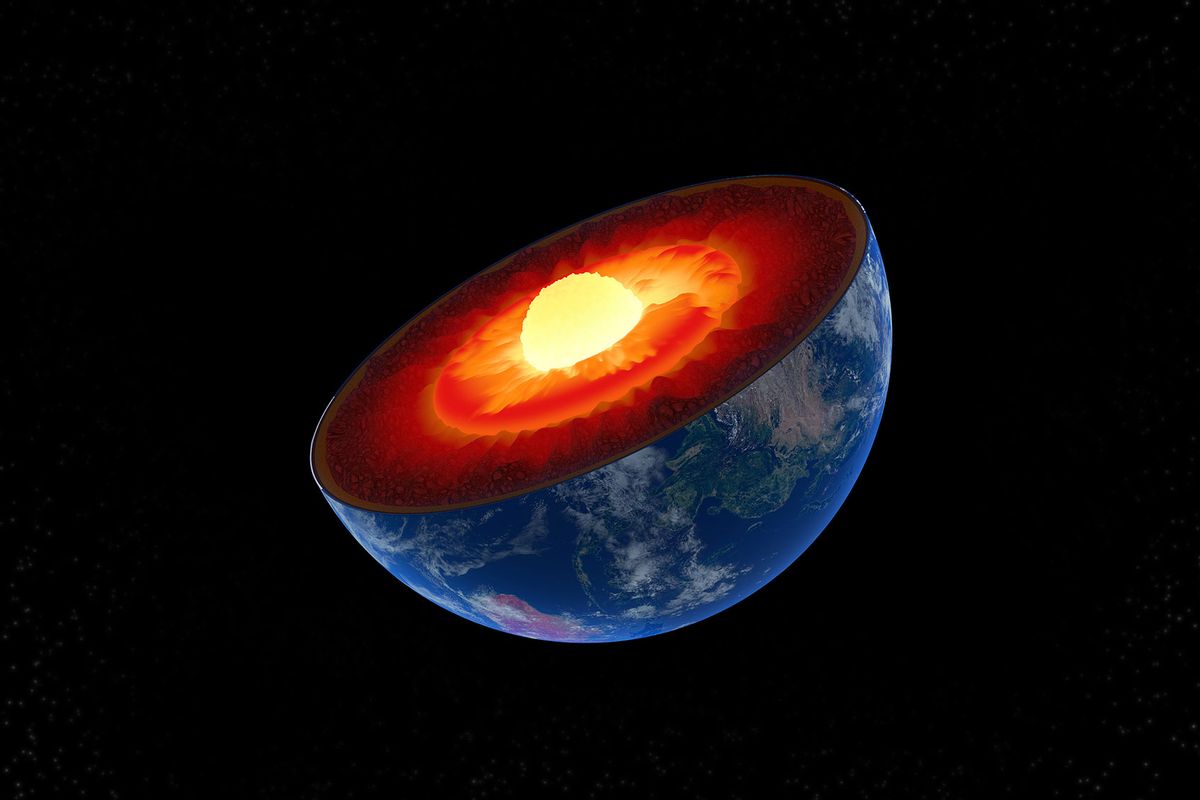 It may seem fantastical to say there is a planet within Earth, but conceptually it is true. Ever since the 1990s, geophysicists have known that Earth's inner core— a ball of iron with a radius of 746 miles (more than two-thirds the size of the moon) — spins in the center of our planet at a different pace than the rest of the globe. In a sense, this separation makes the inner core a bit like a planet of its own.

"It's probably benign, but we don't want to have things we don't understand deep in the Earth."

Now, a recent study published in the scientific journal Nature Geoscience reveals a curious new detail about Earth's planet-within-a-planet. The inner core apparently started rotating in rough synchrony with the rest of Earth around 2009 and, as of now, it actually rotates at a slower pace than the rest of the planet. Indeed, inner-core rotation may have even "paused," researchers write.

Since the inner core is 3,000 miles below the Earth's surface, the Peking University scientists obviously could not perform any kind of direct visual inspection. Instead they used an indirect approach: They analyzed seismic waves that had occurred on Earth at various points in history and which, importantly, had been detected and measured by sensors on the other side of the planet when they occurred. By comparing the lengths of the seismic waves from when they traversed these same routes at different points in time, researchers were able to deduce the speed of the inner core's rotation during those relevant periods.

Is Earth a self-regulating organism? New study suggests our planet has a built-in climate control

Yet the scientists also urge the public not to be alarmed. This is not, as the hammy 2003 disaster movie "The Core" might suggest, the beginning of an apocalypse. Quite to the contrary, the researchers speculate that the current "pause" in the inner core's rotation is merely a phase in a roughly seven-decade cycle.

Experts believe that the inner core started speeding up faster than the mantle around the early 1970s before slowing down in the late 2000s. If that is true, then this ongoing process of the inner core slowing and pausing is quite mundane. More notably, it also suggests that there is an elaborate interplay between the inner core and the other layers of the Earth, such as the mantle, with each part moving in cycles.

Intriguingly, the inner core's rotation affects life on the surface, according to researchers involved in the study.

"It has effects on the magnetic field and the Earth's rotation, and perhaps the surface processes and climate," Xiaodong Song, the leading author on the study and a geoscientist at Peking University responsible for pioneering work in 1996 on the inner core, told Salon by email. "It may have a long-term effect (decades and centuries), but the effect on daily life is likely small."

As Song explained, the Earth's inner core has a "dynamic" relationship with two of Earth's major layers. First, there is an electromagnetic coupling with Earth's outer core. As the outer core's fluid motion generates a magnetic field for our planet, that same magnetic field drives the metallic inner core to rotate through electromagnetic force. In addition, the inner core tends to reach a position of gravitational equilibrium because the mantle and inner core have highly variable rock properties, meaning "the gravity between their structures tends to drag the inner core to the position of gravitational equilibrium."

These same electromagnetic and gravitational forces, according to Song, explain why the inner core's rotations may occur in roughly 70-year cycles.

"Similar periodicity has already been found in other Earth layers, such as the outer core (from the magnetic field changes), mantle and crust (from the LOD variations), and the surface (from the global mean sea level rise and temperature)," Song wrote to Salon.

Interestingly, not all scientists accept the study's conclusions. Lianxing Wen, a seismologist at Stony Brook University, told The Washington Post that the study does not prove what its authors claim.

"This study misinterprets the seismic signals that are caused by episodic changes of the Earth's inner core surface," Wen told The Post in an email, also writing that the claim that the inner core rotates independently of the surface "provides an inconsistent explanation to the seismic data even if we assume it is true."

"The main impact is almost certainly that our day gets imperceptibly longer and shorter within the 70-year cycle."

John Vidale, a geophysicist at the University of Southern California who was not involved in the study, told The Post that the inner core's workings are "contentious" because "we can't figure it out. It's probably benign, but we don't want to have things we don't understand deep in the Earth."

"If we knew what was happening, I guess I'd know what I meant," Vidale explained with a laugh. "People argue that maybe the boundary is moving by kilometers, perhaps the core is spinning tens of kilometers, which probably has almost no effect up on the surface. Since we don't actually know what's happening, we really don't know. So I guess I can't really tell you what it is that we don't know" as to whether there is anything to be concerned about.

For what it is worth, however, Vidale thinks the "chances [are] small, very small, but we just don't know because we don't know what is happening down there for sure."

So what do scientists know about the implications of the core's changing rotation rate?

"The main impact is almost certainly that our day gets imperceptibly longer and shorter within the 70-year cycle," Vidale told Salon. "It may have some influence on the change over time in the magnetic field, which kind of disturbs our navigation a little bit."

For his part, Song acknowledges that his research "won't affect our gas prices or winter storms." Decades into the future, however, humanity may decide this matter deserves attention since it impacts our "geomagnetic field, which shields us from solar winds, and length-of-day, which affects our GPS system."

Overall, Vidale described the study of the Earth's inner core in language befitting a mystery novel.

"We're still trying to figure how the inner core is changing over time," Vidale explained. "We've known it changes for decades and we've had various ideas, and so we're just trying to nail down: Is it oscillating? Is it progressively spinning? Is something else happening? It has some relevance to understanding how the core developed and it's basically curiosity. There is a lot of action down there, enough to change the seismic waves, and we really would like to understand what is happening."