Bill Shine’s wife, Darla, complained on Twitter that she couldn’t use the n-word 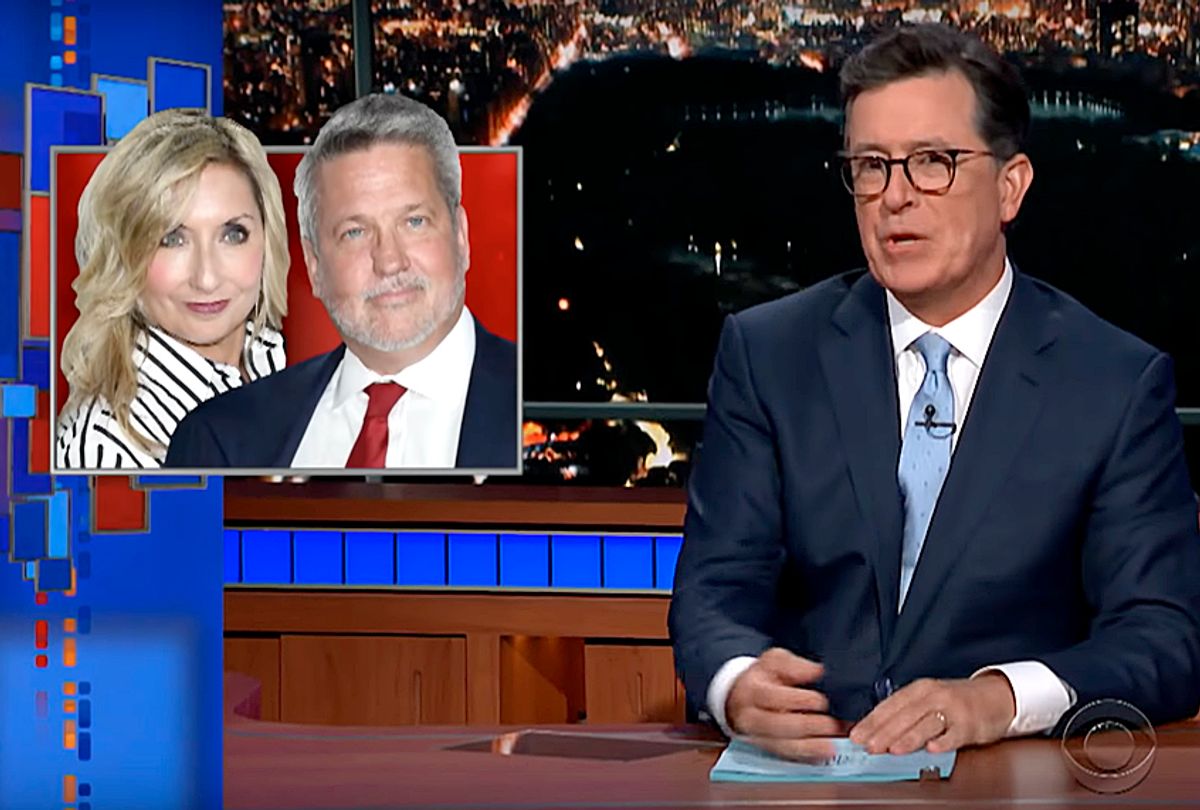 Colbert began by blasting Shine for his 2017 resignation from Fox News for his handling of the network's myriad sexual harassment scandals.

"Now, before working at the White House, Bill Shine was president of Fox News, where he resigned amid the Roger Ailes harassment scandal after he was named in lawsuits for not taking action and trying to cover up allegations of sexual harassment," Colbert explained.

"I'm sure that was a quick interview at the White House," the comedian continued, before mimicking Trump.

"It says here on your résumé that you know Microsoft Excel and you enabled the sexual deviances of a dirty old meatbag? Okay, welcome aboard!"

Colbert then mentioned some of the lawsuits filed by Fox News contributors against Ailes, which accused Shine of being Ailes' "henchman" and enforcer.

"When one female Fox contributor tried to talk to Shine about the sexual abuse at Fox News, he seemed more interested in talking about the Eagles, telling her she should watch a Showtime documentary about the rock band because their story was very similar to the story of Fox News," Colbert said. "Hmm. You don't know why they're so influential and only old white people listen? Yeah, checks out."

"Shine was so toxic after leaving Fox News that 'he was considered untouchable by many other prospective employers,'" Colbert added, quoting The New York Times' Maggie Haberman. "Eh, you're not really Quiznos material. Have you tried the White House?"

Darla Shine has most recently faced backlash for remarks she made on her radio show roughly a decade ago, in which she called herself "sexist" and said that it was "insanity" that women would want to serve on the front lines of combat. She also suggested that women in the military should expect to be sexually harassed.

"I am shocked those kind of tweets came from the wife of the president's communications director and not from the president himself," Colbert quipped.

He then invoked a tweet of hers that defended Trump's reported "s**thole" remarks by sharing an image comparing "Rome 2000 years ago" to "Africa now." Colbert replied by comparing Darla Shine to the Klu Klux Klan.

He also poked fun at her various tweets, in which she complained about the use of the N-word. Colbert then concluded that she "really wants to use the N-word."

"So in conclusion," Colbert said, "Donald Trump just hired a man who had to resign in shame from his last job for aiding a sexual abuser and was married to a bigot who is weirdly obsessed with racial slurs and faux-ginas. They will fit right in."

Shine's ascension to the West Wing is not surprising, considering the president himself has been accused of sexual harassment and assault by multiple women and has defended Ailes and former Fox News host Bill O'Reilly amid allegations against them. Just hours after Shine's hiring became official, Trump made a joke about the "Me Too" movement at a rally in Montana.

But inside the White House, Shine's appointment has been controversial. There are reports some staffers see his hiring as a way to push out Chief of Staff John Kelly.  "They've basically stopped telling Kelly when meetings are. People leave him off the calendar," an administration official told Vanity Fair. "When he finds out, he storms into the room and is like, 'What's going on?'"

In addition, a Republican close to the White House told Vanity Fair that Trump hopes Shine’s growing role in the administration will encourage Kelly to quit. "Trump is too chickensh*t to fire Kelly himself," the source said.

Vanity Fair also reported that the president was “effusive about Shine’s production of the much-hyped prime-time rollout of Supreme Court nominee Brett Kavanaugh on Monday night” to replace the retiring Justice Anthony Kennedy.

"Shine brought in all new lights," a person briefed on the production told Vanity Fair. "He gave Trump what’s called a 'downlight.' Trump's a little fat, but that made him look younger."