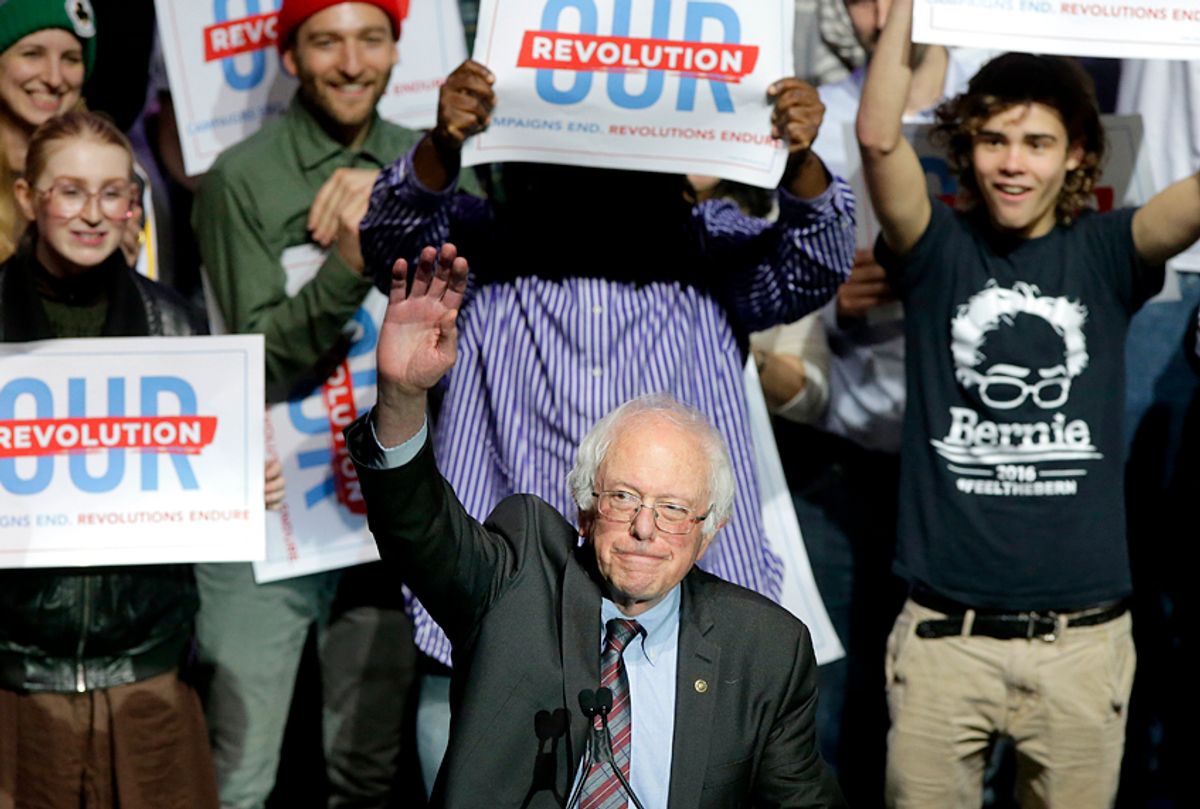 Bernie Sanders addresses an audience during a rally. (AP/Steven Senne)
--

A top adviser for Bernie Sanders' 2016 presidential campaign stands accused of forcibly kissing a woman staffer and making a reference to her riding his "pole" at a hookah bar after the Democratic National Convention had concluded, Politico reported Wednesday.

Robert Becker – who oversaw Sanders' campaign in Iowa and, as deputy national field director, subsequently lead the senator's efforts in California, Michigan and New York – allegedly approached the 20-year-old female staffer later that night and grabbed her wrists before forcibly kissing her, the woman and three additional sources cited by Politico claim.

The woman did not formally report the incident at the time, but was prompted to speak out after Becker, who is reportedly not on Sanders' payroll, "has been calling potential staffers and traveling to early primary states to prepare for another presidential run — activities that Sanders' top aides did not endorse, but did not disavow, either."

"Candidates who allow people like Robert Becker to lead their organizations shouldn't earn the highest office in our government," the woman said. She was granted anonymity, because she feared retaliation from supporters of both Becker and Sanders, according to Politico.

"It just really sucks, because no one ever held him accountable. And he kept pushing, and pushing and seeing how much he could get away with. This can't happen in 2020. You can't run for president of the United States unless you acknowledge that every campaign demands a safe work environment for every employee and volunteer," she added.

Becker has vehemently denied any wrongdoing. In a statement responding to the alleged incident and other claims of inappropriate behavior during the 2016 campaign, Becker told Politico, "I categorically deny these allegations of improper and unprofessional conduct." The alleged assault, he wrote, is "at odds with my recollection of a late evening filled with many hugs and kisses and tears and conversations about what's next."

Asked about the accusation, Friends of Bernie Sanders, the senator's main campaign committee, told Politico that "Robert Becker would not be part of any future campaigns."

"To be clear: No one who committed sexual harassment in 2016 would be back if there were a 2020 campaign," the group added. Friends of Bernie Sanders also called Becker's alleged misconduct "deplorable and fundamentally unacceptable."

While Sanders is reportedly becoming more serious by the day about forging a second White House bid to challenge President Donald Trump in 2020, dozens of women and men who worked on the his 2016 presidential campaign have signed a letter requesting a meeting with the Vermont senator and his top political advisers "to discuss the issue of sexual violence and harassment on the 2016 campaign, for the purpose of planning to mitigate the issue in the upcoming presidential cycle," Politico reported.

Earlier this month, former women staffers told the New York Times that, while working on Sanders' first campaign, they experienced "sexual harassment and demeaning treatment, as well as pay disparity" problems — and that there was no one to turn to for help. They claimed that, when they detailed those concerns to campaign superiors, they were sometimes ignored, and in one case, laughed off. Female staffers also claimed they were paid significantly less than their male counterparts or subordinates. One woman told the Times she made $2,400 a month, but a younger man who was supposed to work under her made more than double that amount.

In response to the allegations, Sanders offered an apology to the former staffers who have raised complaints of sexual harassment. "I certainly apologize to any woman who felt she was not treated appropriately," Sanders told CNN's Anderson Cooper. "And, of course, if I run, we will do better the next time."

While he said he was "proud" of his campaign, Sanders admitted that allegations of mistreatment were "not dealt with as effectively as possible." At the same time, the senator maintained he only recently learned of the accusations, which he claims he was not aware of during the campaign. "I was a little busy running around the country, trying to make the case" for the election, Sanders said, attributing any missteps with staff to his campaign's overwhelming growth and momentum.

Two delegates who supported Sanders in 2016 recently told his staff he could not throw his hat in the ring for 2020 without addressing the sexism they believe thrived during his last campaign, according to the Times.  Sanders has not formally announced his decision to do so for 2020, but last month, as celebrity supporters, former campaign staff and progressive policy leaders gathered at the Sanders Institute, "some spoke openly about a 2020 White House bid as if it was almost a foregone conclusion," the AP reported.

Sanders is just one of many names being floated as a potential challenger to Trump in what is expected to be a very crowded Democratic field in 2020 that features a heap of ambitious progressive leaders — and fewer of the so-called "establishment" kind like 2016 nominee Hillary Clinton. Should Sanders decide to run, he would likely face competition for the Democratic nomination against fellow Sens. Cory Booker (D-N.J.), Kamala Harris (D-Calif.) and Elizabeth Warren (D-Mass.) — three outspoken liberal leaders who have embraced Sanders' call for "Medicare for All" and a $15 minimum wage, among other policy proposals that helped establish the Vermont independent as a national figurehead for Democratic socialism.

Former Vice President Joe Biden and former Rep. Beto O'Rourke, who fell short in his campaign against Republican Ted Cruz in the Texas Senate race in the 2018 midterm election cycle, have also hinted that they are weighing a White House bid. Moreover, John Kerry recently alluded to mounting  presidential bid — and these names far from the complete list.

Sanders' wife, Jane O'Meara Sanders, told the AP last month that one question above all others would steer her husband's decision to launch a bid for the Oval Office: "Who can beat Donald Trump?"

Sanders teased the idea of running for president in a November interview with New York Magazine, in which he vowed to work his "ass off" to elect a candidate who would be able to deny Trump a second term. However, he said, "If it turns out that I am the best candidate to beat Donald Trump, then I will probably run."