Melania Trump's trip to Mar-a-Lago is estimated to have cost U.S. taxpayers $35,000 during the government shutdown 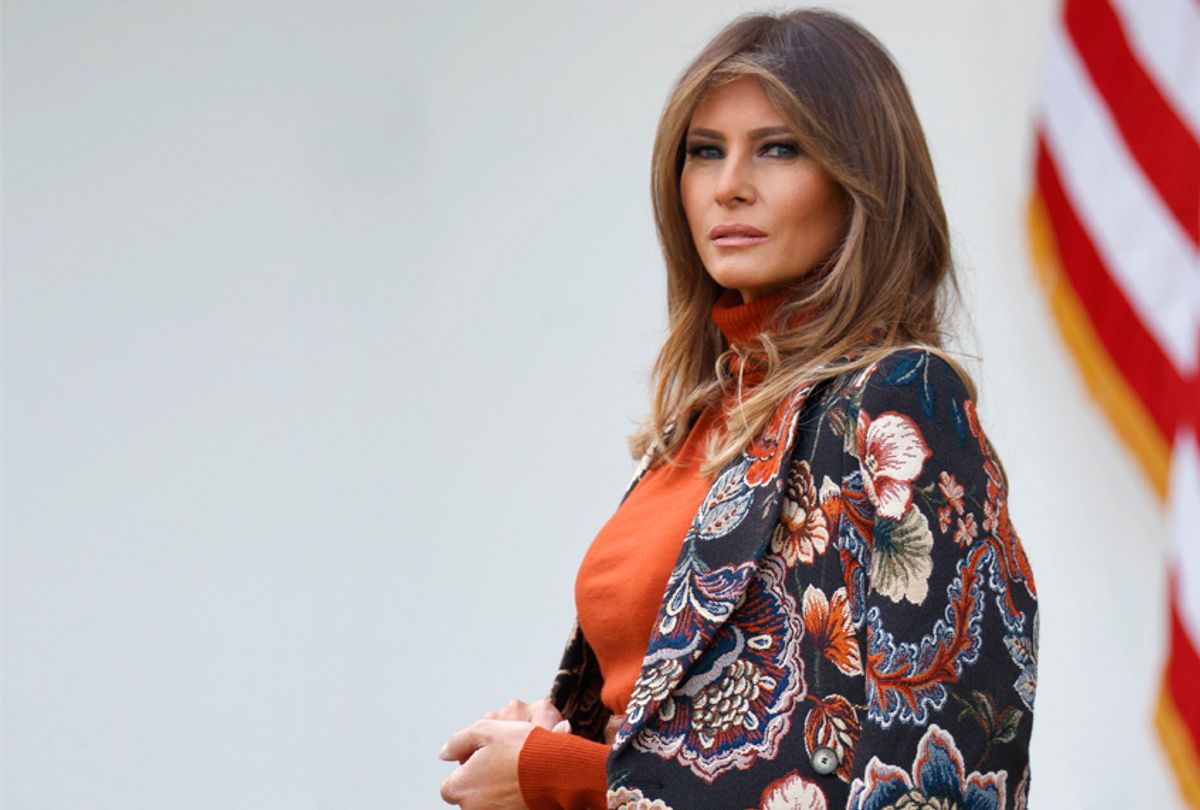 The first lady boarded the aircraft on Thursday at Andrews Air Force Base, according to multiple news reports. Quartz estimated the flight cost U.S. taxpayers $35,000.

News of Melania's travels come after the commander-in-chief issued a letter to Pelosi on Thursday, just before she and other lawmakers were scheduled to depart on the previously undisclosed trip to Afghanistan and Brussels, that he was canceling her foreign flight "due to the shutdown." Trump blasted the trip as a "public relations event" — even though he made a similar stop to Iraq in December, when the government was shut down — and said it would be "totally appropriate" for Pelosi to postpone her travel plans in order to remain in Washington to negotiate the reopening of the federal government.

"Obviously, if you would like to make your journey by flying commercial, that would certainly be your prerogative," Trump wrote to Pelosi.

After Melania Trump's trip to Florida, a decree that banned all congressional delegations from using executive department resources during the government shutdown was issued on behalf of the president by Russell Vought, acting director of the Office of Management and Budget.

"Under no circumstances during a government shutdown will any government owned, rented, leased or charted aircraft support any congressional delegations, without the express written approval of the White House chief of staff," Vought wrote to all executive departments and agencies of the Trump administration. "Nor will any funds appropriated to the executive branch be used for an congressional delegation travel expenses, without his express written approval.

Pelosi, for her part, had been scheduled to visit Brussels with other lawmakers to meet with "top NATO commanders, U.S. military leaders and key allies ― to affirm the nation's ironclad commitment to the NATO alliance," according to her deputy chief of staff Drew Hammill. She then planned to visit Afghanistan to "express appreciation and thanks to our men and women in uniform for their service and dedication" and "to obtain critical national security and intelligence briefings from those on the front lines."

Hammill also pointed out that Trump had visited troops in Iraq earlier during the government shutdown, and so did a delegation led by a Republican: Rep. Lee Zeldin of New York. Trump, however, grounded Pelosi the day after she requested that he delay his State of the Union address — or deliver it in writing — until the government shutdown was over. Pelosi said the partial government shutdown has restricted the abilities of both the U.S. Secret Service and the Department of Homeland Security, potentially harming the "weeks of detailed planning . . . to prepare for the safety of all participants" that precede the primetime address.

Most recently, Pelosi's office accused the Trump administration of leaking information about her trip to Afghanistan and announced that the speaker's trip was canceled because of the "grave threats caused by the president's action," pointing to a formal government assessment. In a statement issued Friday, Hammill said the State Department's Diplomatic Security Service provided a threat assessment overnight "detailing that the president announcing this sensitive travel had significantly increased the danger to the delegation and to the troops, security and other officials supporting the trip."

"This morning, we learned that the administration had leaked the commercial travel plans, as well," Hammill said. "In light of the grave threats caused by the president's action, the delegation has decided to postpone the trip so as not to further endanger our troops and security personnel, or the other travelers on the flights."

He later wrote on Twitter that "multiple" administration officials "were telling Hill reporters early this morning that the Speaker Pelosi delegation was flying commercially."

The White House denied the claim. "When the Speaker of the House and about 20 others from Capitol Hill decide to book their own commercial flights to Afghanistan, the world is going to find out," one official told the Daily Mail. "The idea we would leak anything that would put the safety and security of any American at risk is a flat out lie."

Trump and Pelosi have been embroiled in an intense showdown over the partial government shutdown, which began shortly before the Christmas holiday, over Congress' inability to pass a spending package that includes the $5.7 billion Trump has claimed is necessary to construct a "wall" along the U.S.-Mexico border. Trump and congressional Democrats continue to spar over funds to build a wall along the southern border, with Trump threatening to declare a national emergency to fund the wall if Democrats do not budge. The shutdown, as it currently stands, appears to have no end in sight and has entered its 28th day, making it the longest budget impasse in U.S. history. Meanwhile, negotiations to reopen the nine federal agencies, which have been shut down since Dec. 22, continue to stall.