Hope Hicks dodges questions from House Democrats: "It's a farce" 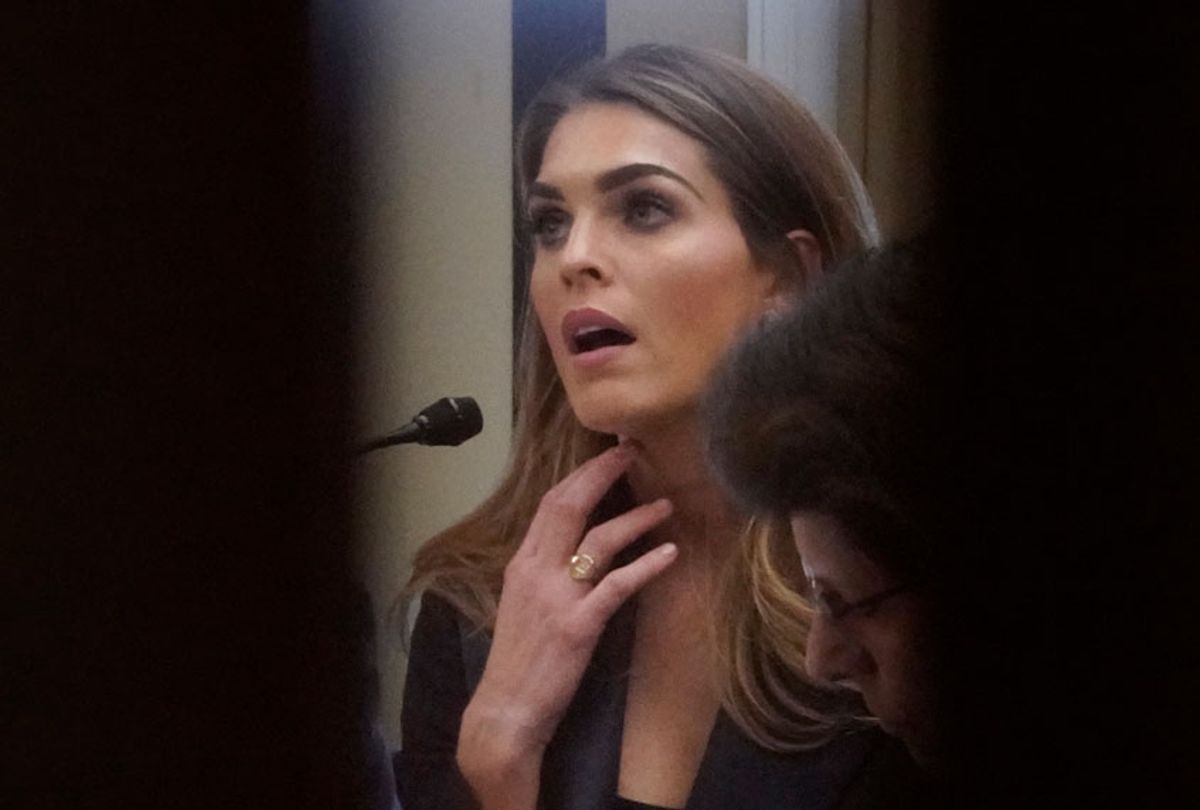 Former White House communications director Hope Hicks refused to answer questions Wednesday about her time working in the White House as she testified behind closed doors before the House Judiciary Committee, according to multiple lawmakers.

Hicks, a longtime confidante of President Donald Trump who was a key witness in former special counsel Robert Mueller's investigation into obstruction of justice, testified before the panel for roughly eight hours. House Judiciary Chairman Jerry Nadler, D-N.Y., said a transcript of her interview will be made public.

In interviews with reporters following the hearing, lawmakers on the House Judiciary panel appeared expressed frustration that a White House lawyer who was present for Hicks' testimony repeatedly claimed the former Trump aide had immunity from discussing her time at 1600 Pennsylvania Ave., including during the presidential transition period. Democrats said Hicks would not even answer questions as basic as where she sat in the West Wing or whether she told the truth to Mueller.

Rep. Pramila Jayapal, D-Wash. called the interview "a farce." She said Hicks at one point tried to answer a question about an episode about possible obstruction by Trump involving former Trump campaign manager Corey Lewandowski only to be stopped by the White House counsel.

"Basically, she can say her name," Jayapal said.

House Judiciary Chairman Jerry Nadler, D-N.Y., dismissed the White House's claim that Hicks was "absolutely immune" from discussing her tenure with the Trump administration and vowed to "destroy" that assertion in court.

Rep. Sheila Jackson Lee, D-Texas, who described Hicks' testimony as a "building block," told reporters, "We'll have to move toward court proceedings to delve into those questions more deeply."

She said Hicks' testimony was related to her time working on the presidential campaign.

"There is something there ⁠— there with Ms. McDougal ⁠— and something there ⁠— there with Michael Cohen," Jackson Lee said, referring to Karen McDougal, the former Playboy playmate who alleged she had an affair with Trump and had received a payment from a tabloid not to discuss her story publicly. Trump has denied the affair. Cohen, the president's former lawyer, is now serving three years in prison partly for campaign finance violations related to that payment.

Jackson Lee called Hicks "one peg on the board" and said the panel would proceed to seek testimony from Mueller and former White House counsel Don McGahn, who was also directed not to testify before the panel.

Earlier in the day, Rep. Ted Lieu, D-Calif., another member of the committee, tweeted from inside the hearing room: "I am watching Obstruction of Justice in action as @TheJusticeDept is objecting to everything that Hope Hicks wants to say during her tenure in the White House. The Administration's position is absurd & they will lose in court. What is the @realDonaldTrump Administration hiding?"

Georgia Rep. Doug Collins, the top Republican on the Judiciary Committee, dismissed the hearing as a "made for press event" for the Democrats. He added, "There's nothing new here. We took eight hours to find out really what most of us knew at the beginning."

Trump denounced the proceedings throughout the day, calling them "extreme Presidential Harassment," and later lamented on Twitter that "DEMOCRAT CONGRESSIONAL HEARINGS ARE #RIGGED!"

"So sad that the Democrats are putting wonderful Hope Hicks through hell, for 3 years now, after total exoneration by Robert Mueller & the Mueller Report," the president tweeted Wednesday afternoon. "They were unhappy with result so they want a Do Over. Very unfair & costly to her. Will it ever end?"

Hick's appearance marked the first time a current or former member of Trump's inner circle faced questions from Congress as part of the Democrats' obstruction of justice investigation, which began in March. It's unclear whether her testimony, which did not mention her White House tenure, will advance the panel's probe, which focuses on Trump's conduct as president.

The House Judiciary Committee has struggled to secure documents and testimony from key witnesses amid a feud with the White House. The administration's efforts to limit Hicks' testimony is appeared to further anger Democrats who have accused Trump and his administration of stonewalling or flat-out ignoring their requests for documents and information related to their oversight efforts.

In a letter sent to Nadler, the committee's chairman, on Tuesday evening, ahead of Hicks' appearance, White House counsel Pat Cipollone stated that Hicks was "absolutely immune" from testifying about her 14 months at 1600 Pennsylvania Avenue.

"Because of this constitutional immunity, and in order to protect the prerogatives of the Office of the President, the president has directed Ms. Hicks not to answer questions before the committee relating to the time of her service as a senior adviser to the president," Cipollone wrote.

Cipollone also noted that the White House could attempt to block Hicks from answering questions about her time on the presidential transition team, because of potential executive privilege concerns.

"Much of Ms. Hicks' work during this period involved discussions with the president-elect and his staff relating to the decisions the president-elect would be making once he assumed office," Cipollone wrote. "Accordingly, her responses to specific questions about this period would likely implicate executive branch confidentiality interests concerning that decision-making process."

Hicks' coziness with Trump made her a key witness in the investigation in Mueller's investigation. She was interviewed last year for roughly nine hours by the former special counsel and the House Intelligence Committee behind closed-doors, and her exit from the White House came within 48 hours of her admitting to the committee that she had told "white lies" on the president's behalf.