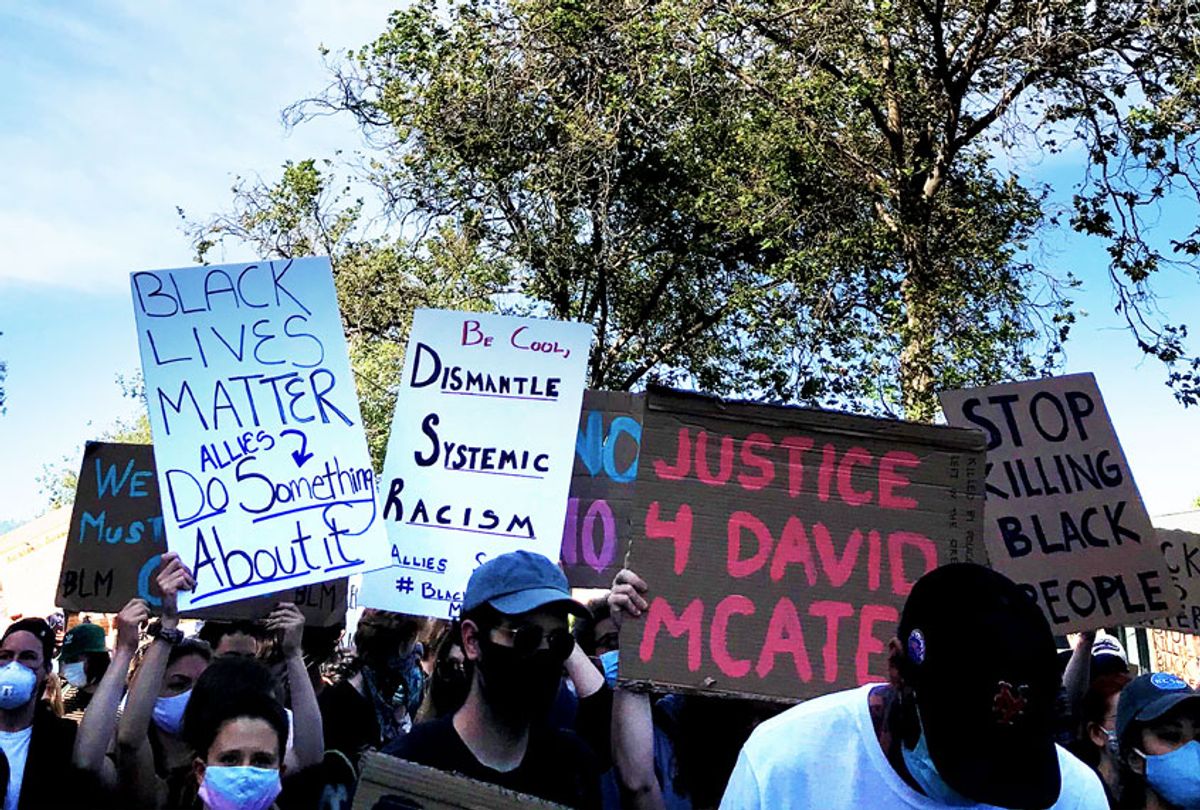 The protest, which was attended by an estimated 15,000 people, was organized by high school students at Oakland Technical High School. It started at 4 p.m., with plans to march from the high school to the Oakland police department downtown. The event resembled a festive parade, with little police presence initially—with the exception of helicopters in the sky. Students spoke to a large crowd that responded with claps and snaps.

Gala King joined the march on behalf of Sama Sama, a summer camp and collective of Pilipino and Pilipino-American parents in the San Francisco Bay Area.

"Kids are learning about their own identity and how to demonstrate solidarity with black communities," King told me, who was marching with adults and children. "We've been learning a lot about the Black Lives Matter movement over the years, and I'm from Minnesota — the last time we were all together was for the killing of Philando Castile, which also happened there — so yeah it's been something we've been wanting to learn about, hear about."

Momo, a 23-year-old protester, said she attended the protest "specifically, as an Asian-American standing in solidarity for black power." She explained that her sign, which read "Yellow Peril supports Black Lives Matter" refers to the Asian American community showing solidarity to the black community by way of Yuri Kochiyama's partnership with Malcolm X.

As protesters continued to march down Broadway Street toward downtown, stationary protesters cheered them on from the sidelines. Claps and chants followed, including "No justice, no peace", and "Say his name, 'George Floyd.'" The parade passed by Kaiser Permanente Oakland Medical Center, where protesters cheered on healthcare workers donning scrubs and white lab coats, who cheered back.

One medical worker named Amy, who asked for only her first name to be published, said that she took a break from work to observe the march. "You hear all this stuff about things getting violent — I just wanted to see what was going on in this moment, here," she said, noting that she has been treating coronavirus victims. Amy said she supports the movement but fears that COVID-19 cases will rise. "I think we're probably going to have an uptick in infections," she said.

Once the parade arrived in the open space in front of Oakland City Hall, known as Oscar Grant Plaza, the crowd lingered in the plaza speaking to assorted activist groups. Nearly everyone was wearing masks, including Dayton Andrews, a 27-year-old who is a member of the Revolutionary United Front and the United Front Against Displacement.

"This protest symbolizes literally millions of people getting involved in politics that have never been involved in politics before, because on some level they all see that the system we live in is terrible and we have to do something. The something is the kicker," Andrews said. When asked what the "something" is, Andrews said: "My view is that we have to overthrow capitalism and replace it with socialism — we have to have a society that is run by the working people for the interest of the working people."

Andrews said he believes the protests that have followed the death of Floyd appear to have a different message than the protests that occurred after Michael Brown Jr.  was killed by police in Ferguson, Missouri in 2014.

"It's not just about jailing killer cops, it's really people seeing the fact that cops don't actually play a progressive role in our society," Andrews told me.

As the clock neared curfew, many people started to leave the area. Including Quinn Grodzins, a 29-year-old who lives in Oakland and grew up in Berkeley, told Salon he showed up because Black Lives Matter is a cause he feels strongly about.

"I sort of struggled with it because we are in the middle of a global pandemic and it could put other people at risk, but I decided I feel strongly enough to come out and show support just for the movement and in general the sense that we need to change a lot of things about this country," Grodzins said while wearing an Antifa flag as a cape. Grodzins adds that he identifies with Antifa, and defined himself only as "some kind of a leftist."

When asked about President Donald's Trump threat to designate Antifa a "terrorist organization"  after a white supremacist group posed as the anti-fascist group on Twitter, Grodzins called the fracas "silly."

"It's obviously one of his tactics that he uses to try to rile his base of people that, I have to say, are not informed about a lot of things in the world correctly. . . . it's sort of a way for him to blame anyone who is left of him for everything and not take any responsibility," Grodzins said.

According to a Twitter report, KQED reporter Erin Baldassari reported that police used tear gas and flash-bang grenades on a group of protesters near the police headquarters at 7:41pm, a little less than 20 minutes before curfew. Until that point, police presence was light. Some protesters stayed after the 8 p.m. curfew. Salon also left before police sprayed tear gas and shot rubber bullets at protesters for breaking curfew. Media is exempt from the curfew, yet CBS affiliate KPIX reporter Katie Nielsen was handcuffed and detained, as she detailed on Twitter. She was released within a few minutes.

At 9 p.m., the Alameda County Sheriff's Office tweeted that "over 100 people" had been arrested so far.