Stars of the final presidential debate: Biden laughing at Trump's BS and the invisible mute button 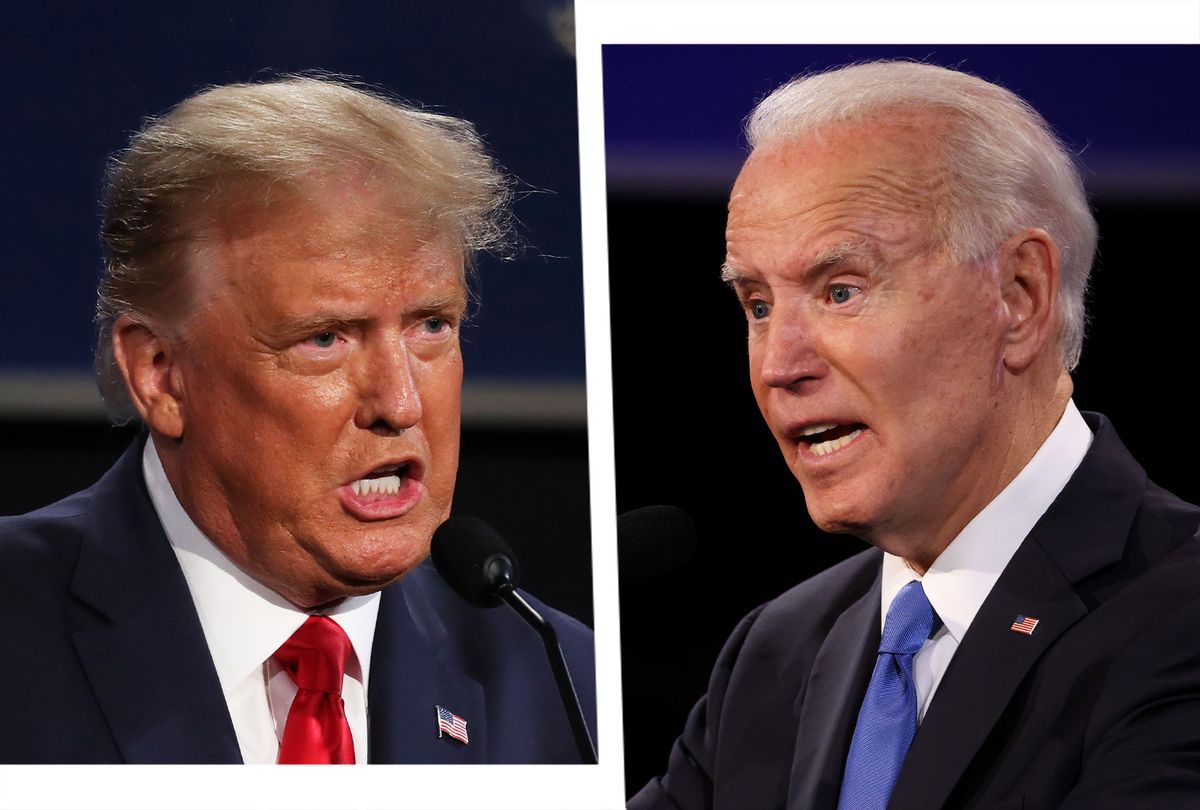 America, we're rounding the corner. It's going away.

It could be 11 days, or a couple of weeks — a month or two, tops. The long and short of it is, Thursday's presidential debate at Belmont University in Nashville marked the beginning of the end of what feels like a decades-long presidential campaign cycle.

Regardless of the ultimate outcome of the 2020 contest, this is the last time any of us will have to smooth out any internal clenching resulting from enduring Donald Trump in a nationally televised debate with anyone, let alone former Vice President Joe Biden.

Take that in for a moment. Let this be your centering "om." Our votes may be suppressed, and the Russians may hit our ballot-counting systems with an aggressive cyberattack, but nobody can take that feeling of relief away from you, America.

As was the case of the dumpster fire that came before, the second and final presidential debate probably didn't change anyone's mind save for the few Trump-leaning voters whose ballots were being held back on the condition that, ahem, he "act presidential" for once.

Oh, who are we kidding? Those people don't exist.

Nonetheless, it must be noted that whatever voodoo Trump's advisers cast on him that prevented him from behaving like a shaved yeti dosed with PCP obviously worked. From the beginning of the debate Trump treated the audience to a relatively calmer version of himself. He even addressed moderator Kristen Welker as she deserves to be addressed: like a human being worthy of respect. Fancy that.

Midway through the debate Trump even paused to compliment the NBC News White House correspondent's performance:  "So far, I respect very much the way you're handling this."

Welker in turn behaved like the moderator audiences so desperately needed a couple of weeks ago when Trump routed Fox News' Chris Wallace — someone with a firm hand who neither fed Trump's malevolence by displaying signs of exasperation nor reacted to his weak attempts to curry favor. Trump is still the same bully who recently tweeted that Welker is "no good" and has "always been terrible & unfair, just like most of the Fake News," after all.

Good or insulting, nothing he says matters. The goal has always been to corral him from speaking out of turn, and Welker handily did this.

But then, Trump only deigned to respect Welker because it would benefit him. She is the second Black woman in history to moderate a presidential debate after former ABC News anchor Carole Simpson, who was in charge of refereeing the 1992 debate between George H.W. Bush, Ross Perot and Bill Clinton.

Moreover, recently Trump has engaged in a last-ditch effort to improve his numbers with voters of color. I'm guessing his debate preppers advised him that mounting an attack on a woman of color would be antithetical to that aim, to say nothing of his past behavior or actions he's undertaken that actively harm Black Americans and other marginalized groups.  Plus, having been recently grilled to perfection by Welker's NBC colleague Savannah Guthrie in a recent town hall,  maybe Trump decided to see what would happen if he didn't poke the lioness for once.

There's also the Commission on Presidential Debates' declared commitment to mute the microphone on each contender during his opponent's two minutes of response to Welker's questions. That may have acted like a shock collar for Trump . . . for a time. Regardless of the reason for the president's relative normalcy at the top of the debate, his uncharacteristic initial calm predictably caved to his combative nature. Welker was ready.

Although she didn't do much in the way of fact checking — Wallace didn't either during the first debate — Welker cut off Trump's lie-filled rants and refused to give him room to steamroll Biden or disrespect her considerable efforts to keep the debate running smoothly. But she didn't give Biden any more leeway than she afforded his opponent, either. The difference is that in large part Biden adhered to his time constraints, while Trump had to be herded back into compliance time and again.

As for the mute button, it is unclear as to whether it was put in use beyond its role as a behavioral deterrent. There were a few instances that it may have been put in play, but its absence was noticeable during Trump's odd rants about China, the Biden family's alleged corruption and his performance of his classic ditty of "Nobody has done more for the Black community than Donald Trump" which he chose to mash-up with "and if you look, with the exception of Abraham Lincoln I'm the least racist person in this room."

That was hilarious for a number of reasons, but not as much of a knee-slapper as Biden's zinger response: "Abraham Lincoln here is one of the most racist presidents we've had in modern history."

Notice that we're not diving into the substance of the issues addressed during Thursday's hour and a half, even though the debate actually did so this time around. Well, mostly Biden did. Both candidates spoke to topics of Welker's choosing, including the administration's pandemic response, environmental policy, race in America and national security. On Trump's side of things the issues might as well have been China's awfulness, Hunter Biden's allegedly corrupt business dealings, Joe Biden's many real estate properties (all two of them!) and bird murdering windmills.

Biden deflected Trump's rambling by looking directly into the camera and asking the audience in so many words, "Aren't you tired of this lethal malarkey? America, are you ready to calm the heck down? Come on, man."

This aspect of the illusion of control resulted in the most effective television. Trump's awareness of the mute button led him to visibly struggle against his tendency to speak out of turn, conveying his dismay in facial expressions that ranged from smug to angry Macy's Thanksgiving Parade balloon.

On the right side of the split-screen, Biden mostly looked entertained by Trump's wilder attempts to besmirch his reputation; when he wasn't laughing he looked utterly amazed at witnessing the bull taking flight out of Trump's mouth. Indeed, the event's most edifying moments weren't in what the candidates said but in the reaction shots caught on camera when they weren't talking.

The fact checkers did their jobs on Twitter and news outlet live blogs, as they should. However, it is those contrasting images that told the viewers all they needed to know about the characters in contention here — that, and Welker's inspired final question, in which she asked each man what their message to America would be on their respective inauguration days.

Biden responded to this hypothetical scenario with a message of unity, Trump with an insistence that Biden — who, remember, in this fantasy has already lost — would raise their taxes.

And you know what? Fine. Great. It's all dandy because it leaves us with an impression of two clear winners: Welker and the American viewer. The former succeeded with skill, intelligence and fortitude; the latter simply by clearing this pointless hurdle and knowing that one day soon it will all disappear like magic. All that remains is to make it through this election with our sanity intact. Don't let it dominate your life.