Reading while I jog or do chores? Great! But also, give me all the random voices and accents while you're at it 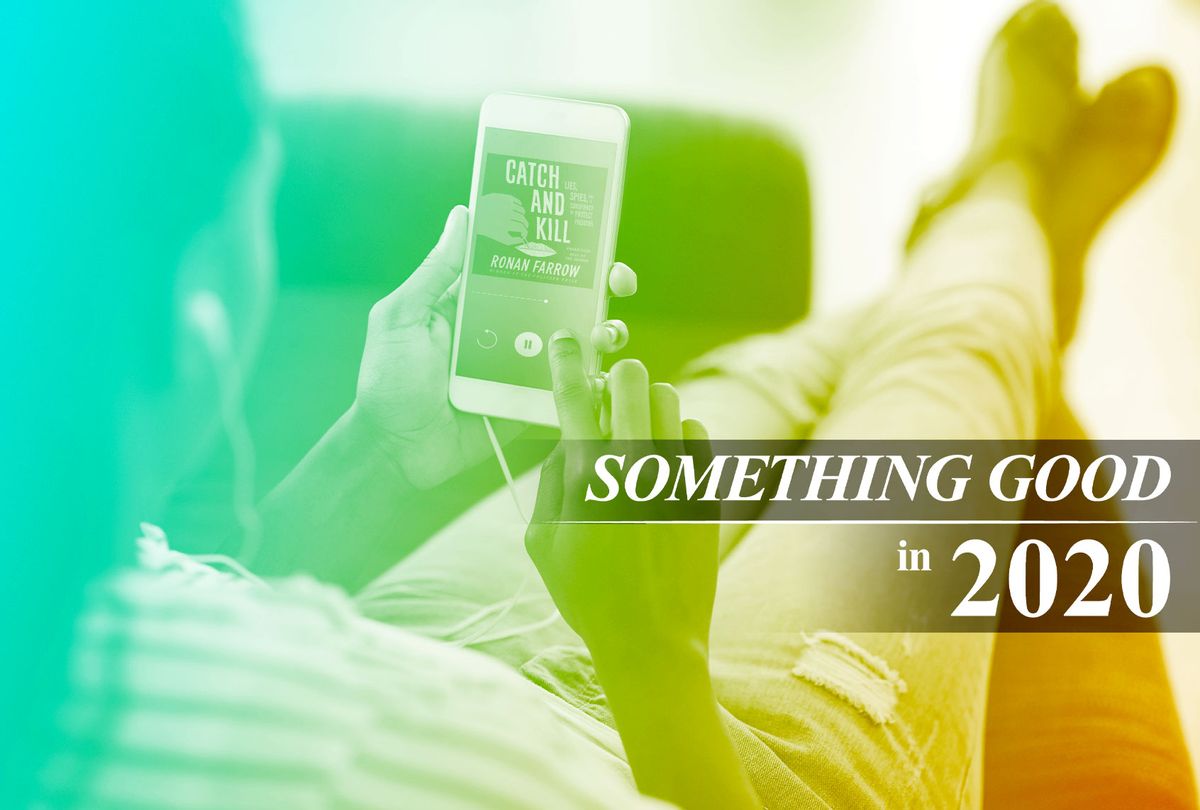 Several months into lockdown, I injured both of my arms, sidelining my yoga practice for an indefinite period of time. Needing exercise to stay sane, I switched to jogging at my local park, but it wasn't easy. I found that music did little to inspire me to keep moving — so I tried podcasts, which then segued into engrossing audio dramas.

And then I was introduced to Libby.

I had already been using the online OverDrive service at the library to borrow ebooks, but its Libby app does all this and more, even playing audiobooks directly on your phone. No need to shop for another app like you do with podcasts. It's easy to use, lets you listen at faster chipmunk-friendly speeds, and is free. Also, did I mention that when you "return" a book on the app the image of the book spins away into the horizon and you're gifted with digital flowers? I don't often wax poetic about apps, but Libby is perfection.

But which audiobook should I listen to first? My friends had raved about the audio version of Taylor Jenkins Reid's rock 'n' roll novel "Daisy Jones & the Six" with its star-studded voice cast, including Jennifer Beals, Benjamin Bratt, the always-lovable Judy Greer and Pablo Schreiber, but I at the time I was 23rd in the "Holds" queue for that title. Another time.

And then I recalled that when Ronan Farrow released "Catch and Kill" last year, reviewers made a big deal about him voicing the audiobook – especially his attempts at performing various accents and voices. Sure enough, as early as the prologue, Farrow tackles a conversation between a Russian and Ukrainian, gamely rolling his R's and even speaking a few Russian phrases. C'mon! That's dedication.

Throughout the book, Farrow lavishes attention to detail, setting scenes that include plenty of aural imagery, as if he knew that he'd have listeners as well as readers. But in fact, Farrow is just a damn good storyteller, one who understands how to build a driving narrative behind the journalism hoops he had to jump through to pursue these stories of sexual abuse and cover-ups. As Salon's Erin Keane wrote last year, the book is a "a propulsive, cinematic page-turner," and I found excuses to continue listening long after I finished exercising. All the voices – including an Aussie, a breathy Rose McGowan, and even Trump – are just a delightful bonus. (And apparently, worthy of a Grammy nomination!)

Farrow isn't alone in attempting the multiple voices and accents, though. As I moved on to more escapist fare – ranging from action and sci-fi thrillers a la Blake Crouch to Regency-set novels in preparation for Netflix's upcoming "Bridgerton" series – I realized that this is the norm. "Daisy Jones & the Six" is an exception, apparently.

Usually one voice actor narrates and performs all the dialogue in a book, which necessitates changes in pitch, tone, and yes, even accent at times. For example, The Fug Girls' "The Royal We" sequel "The Heir Affair," narrator Christine Lakin plays both men and women, and performs American, English, and an assortment of other U.K. accents. A chapter featuring a fictionalized take on "The Great British Bake Off" is especially entertaining.

I began to recognize voice actors and seek them out. Bahni Turpin reads mainly books by Black female authors and/or stories that require African-inspired accents, such as the "Children of Blood and Bone" series and "Transcendent Kingdom" by Yaa Gyasi. Nancy Wu is behind all the family squabbles in Lillian Li's "Number One Chinese Restaurant" and other Asian books like Sayaka Murata's "Convenience Store Woman." Roselyn Landor is a British theater actress who has fully transitioned into audiobooks, mainly Jane Austen-type stories.

I miss every aspect of traveling (yes, even the airport food); and somehow, listening to these variously accented performers get angry, feel frightened and fall in love, engages my wanderlust in a way that watching food travel shows or the pommy "Crown" does not. Perhaps it's the intimacy of hearing these voices directly in my ear. Maybe it's the way my brain must fill in the gaps of the story without the benefit of visuals.

How I consume audiobooks also differs from how I watch TV or even read traditional books, which requires I be relatively sedentary. But with audiobooks, I'm restless and can't stay still. And I don't need to. With an audiobook I can also prep and cook a more elaborate meal, sort the contents of boxes in my shed, and frame all the art I've bought over the years. Plus, I can finally turn off my screens.

But for all the improving and high-minded reasons to enjoy audiobooks, I still get the most joy from the surprise vocal performances: the arrival of a Russian tough guy, a random Scottish laird or better yet, a yowling cat. (Note to self: Seek out more audiobooks with prominently featured animal characters.) With precious little in 2020 to laugh about, at least I don't have to mourn the loss of my sense of humor.