A childhood without photographs

Modern childhood is endlessly documented; mine, not at all. What does it mean to live a photo-less life? 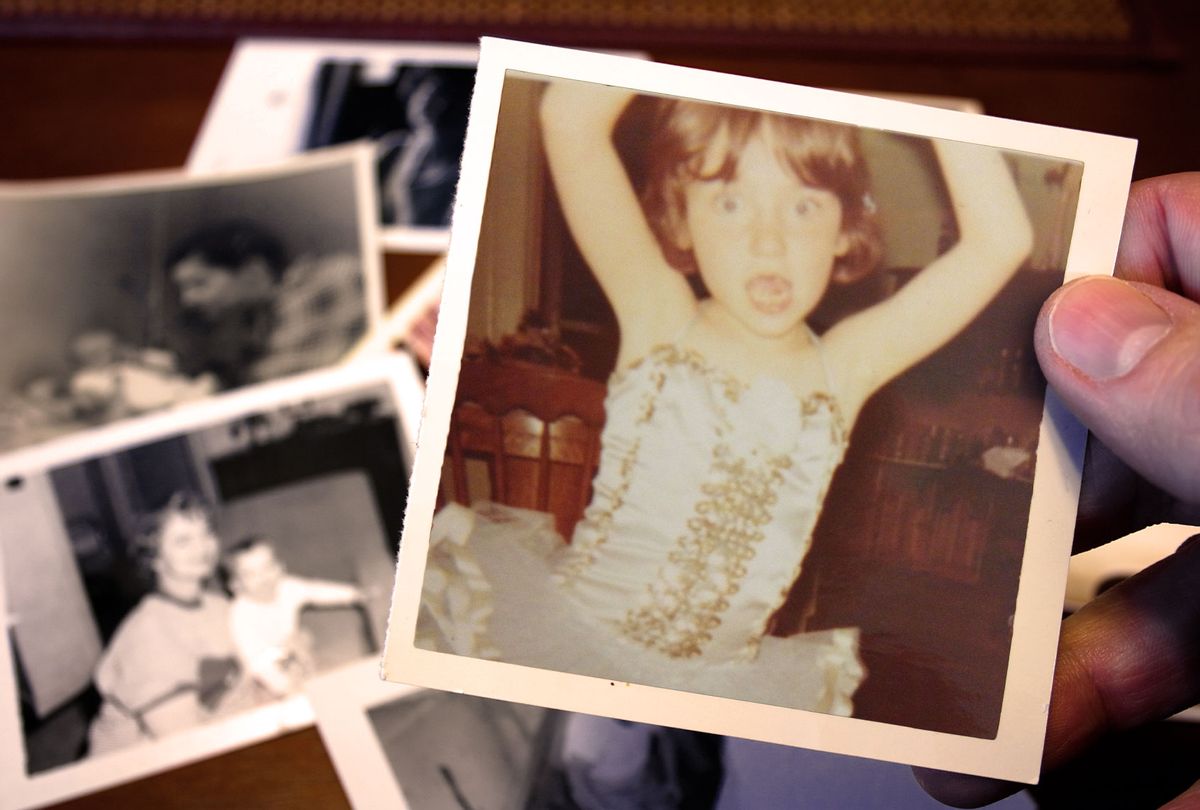 My aunt texted the picture to me a few days ago. She was going through some old photographs, and found this one with her daughters when we were kids. I gasped a little when I saw the image — my old living room, my old living room couch, my old haircut. Unlike my digital age daughters, who have amassed thousands of images of themselves from birth to present moment, I don't have too many photographs from my past. My childhood exists almost entirely in my imperfect memory.

We've now spent two decades wondering aloud about the effects of endlessly chronicling and documenting children's lives. We've raised an entire generation with month-by-month growth updates on Instagram, first day of school shots on Facebook and YouTube channels run by tweens out of their bedrooms. But what does it feel like to like to live in that very different space, one in which there's almost no evidence of your childhood?

For most of the modern era, family photos marked a special occasion. I grew up when film and processing were the only game in town, and they were expensive. It's unsurprisingly then that my mother, the fifth child of six, appears in only a handful of her family scrapbooks. My own life up until the day I left for college fit in one-three ringed album. Yet I remember some of the images in it better than I remember the events they marked. I am sticking my tongue out through the wide gap a recent fall made in my smile. I am stretching in my pajamas, barely awake on my fifth birthday. I am eight years old, standing on a rock at the seashore, looking at the ocean as my long hair ripples in the breeze. Those moments exist in my mind accompanied not with the feeling of the warmth of a bed or the smell of salt water, but the shine of 4 x 4 glossies in a vinyl sleeve.

Before the age of cellphones, the predictable answer to the question, "If your house was on fire, what belongs would you save?" would be, "the photos." In the stories of devastation from hurricanes, fires, floods and abrupt violence, the narrative of the lost family mementoes figures prominently. (Hence the numerous online tutorials on how to restore damaged photos.) But there are other reasons a person would lack photographs. Adoptees, like a friend who came to America at the age of seven, may have scant photographic evidence of their earliest years. And then there are people like me, whose families have been divided by disputes and estrangement.

I hadn't been in my mom's house in over a decade. Yet there I was, alone inside it on the hot, wet day last summer that my stepfather died. The cops had given me the keys so I go could in and retrieve the cats while my Alzheimer's patient parent was being transported to a care facility.

The house held few memories for me; they'd moved into it when I was thirty. There was only one thing in it I cared about, and I knew exactly where it was. The old photo album, on the bookcase in the den. The pictures of Thanksgivings and graduations and cookouts. Images of my mom and me together, in a house I am uncertain I recall the contours of. Were we happy then? I remember pictures of smiles, not the sounds of arguments. But the book was gone. That day, I stood in a hot, airless house, listening for the mewls of two hiding felines and scouring the shelves for proof of my own childhood. The cats, I would find. The pictures, I would not. Whether they'd been disposed of in a fit of rage or an accidental memory lapse, they were lost to me forever. I will never know what happened to that album. All I can wonder is, what becomes of a past I'm still trying to make sense of? If I had those pictures, would they even tell the real story?

"I have been asked these important questions many times, especially by adoptive and foster parents, but also individuals who lost their home and invaluable photographs due to natural disasters and monetary concerns," Dr. Leela R. Magavi, M.D., the regional medical director for Community Psychiatry, California's largest outpatient mental health organization, tells me via email. She says that the impact of that loss on childhood memories can be mitigated via other resources.

"For individuals who have few or no photographs from their childhood," Magavi says, "they can journal and create a timeline to recall some memories. Imagining their old home, school or hobbies could target emotional circuits, which could bring back memories. Conversations with and stories shared by family memories can help adults find joy in their childhood memories. Some individuals actually gain a sense of comfort and relief by speaking with their family members. Some adults enjoy observing their loved ones excitedly speak about their childhood more than viewing a photograph. Revisiting special places from childhood can lead to an emergence of invaluable memories with family and friends."

I learned the value of that comfort firsthand two years ago, when I returned to my hometown and reconnected with my cousins at a family funeral. My mother couldn't reminisce with me now even if she wanted to. But walking around the old neighborhood, rekindling memories with other people whose lives were concurrent with my childhood and adolescence, gave me back a sense of rootedness I hadn't felt in a long time. And it made me understand profoundly the value of both living in the moment and preserving it for the future.

"Your nervous system is starving for reminders of powerful moments of joy and connection. Although you don't have those from your childhood, you can create new memories now,"  therapist J.F. Benoist, founder & program director of The Exclusive Hawaii and author of "Addicted to the Monkey Mind: Change the Programming That Sabotages Your Life," says via email. He adds, "To adults with or without photos from their early years I say this — it's never too late to reinvent your childhood. What I mean is that the body remembers what you reinforce every day. For example, you could go to the dog park with your spouse and dog. Take photos of the fun you're all having together. Then, print one of those photos out and display it."

It's no accident that the hallway of my apartment is covered in photographs, mostly of my daughters but a few that predate them. I walk past them a hundred times a day, and I often stop in front of one or the other to see what it's saying to me now. The single image ever shot of my parents together. My college roommates, laughing in a kitchen. Me, clumsy in a blue tutu. The girl in the picture looks out at me. She's half clowning, half frightened. I know what happens to her next. She will fall down. She will never learn to dance. I also know, because I know her, that she will learn how to get back up. There's no picture for that, but it's okay. I remember.