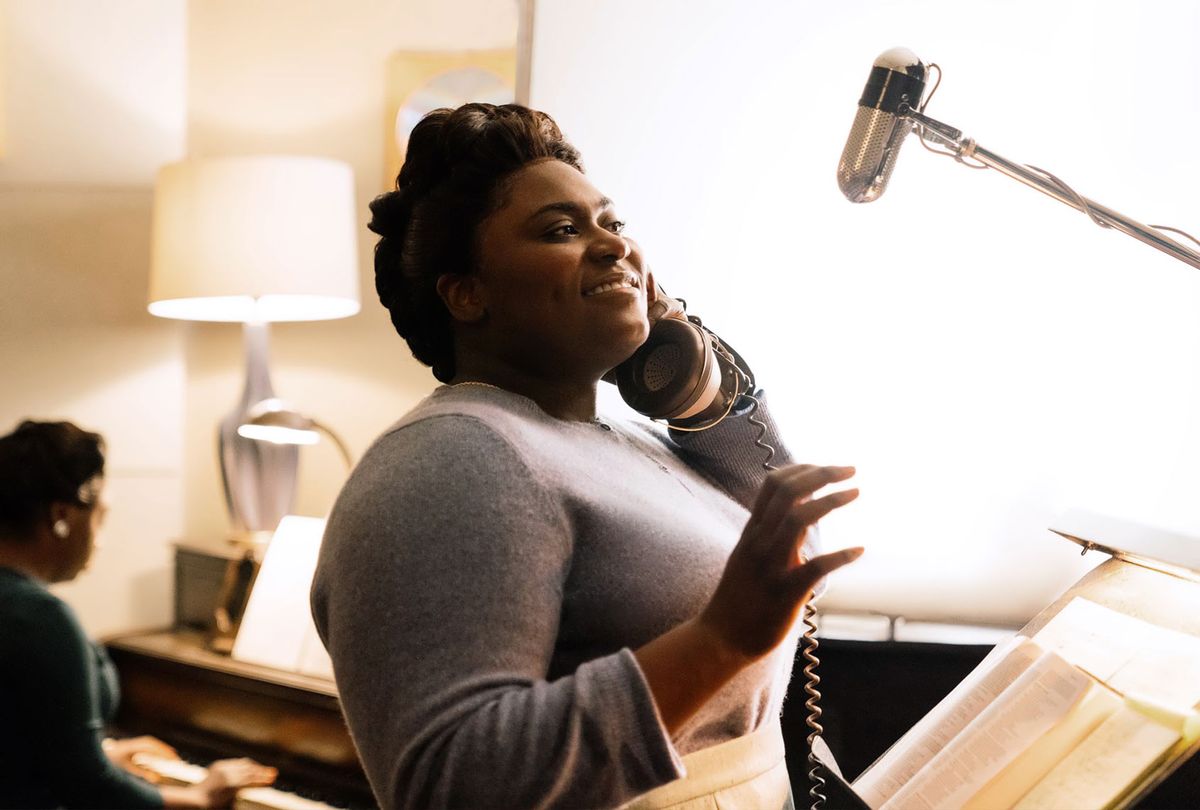 Lifetime's "Robin Roberts Presents: Mahalia" proves Mahalia Jackson's story could span more than two hours quite easily. Scan her biography, listen to her voice, appreciate the fullness of her talent, and it isn't farfetched to say she'd be as worthy a candidate for a season of "Genius" as Aretha Franklin.

Jackson didn't sing popular music, though – she sang gospel. That may be the difference, although it shouldn't be. Mahalia sang for the church with a blues-style fire and spirit inspired by Bessie Smith that scandalized Chicago churches at first but eventually brought Carnegie Hall calling. Her crossover appeal with Black and white radio listeners likely influenced Franklin to borrow a portion of Jackson's flavor for her own vocal stylings.

One would become the Queen of Soul, donning her crown with confidence.

According to the version of Jackson presented in "Mahalia" and played by powerhouse performer Danielle Brooks ("Orange Is the New Black"), the Queen of Gospel did not assume her reign so easily. A lack of self-confidence was partly to blame for that, but propriety policing also dims her light for a time. We only see young Mahalia briefly as a child, singing to Smith's records in an angelic voice that stops people in their tracks. Instead of celebrating the girl's talent, her Aunt Duke chastises the girl, insisting she use her gifts only to upraise God and for no other purpose.

That message stays with her throughout her adulthood, as does the energy and spirit she picked up from those old blues records. Brooks rides out every swoop, rise and trill in Jackson's style as she recreates signature moments from the singer's life. In covering the gospel singer, Brooks doesn't merely capture the essence of Jackson's vocal fortitude. She's holding true to Jackson's guiding principle that gospel's specialness lies in its its ability to lift a person's spirit and make them feel better.

"When I sing God's music, it's hope," she explains to one of the many people begging  her to make a blues record. "I can't stand to live with any more pain."

That line may prove to be an essential citation in an ongoing argument about how Black female artists have been portrayed in films like these, especially lately. Here writers Bettina Gilois (who died in July 2020) and Todd Kreidler create a story that is joyful, bright and facile in the way that Lifetime fictionalized biographies tend to be.

Take this not a mark against it but an indicator of what to expect: nice isn't necessarily code for terrible. On the contrary "Mahalia" is pleasing, good mood fodder that should in no way be considered an exhaustive account of the gospel virtuoso's expansive life. It may not qualify as an outstanding work of art or the definitive dramatization of Jackson's life, but Brooks' preeminence is the answer to any question of how this show will get over with audiences.

"Mahalia" isn't entirely washed cleaned of the singer's struggles; we see her encounter discrimination in the South and from Black people in the North, such as when a respected professor chides her during a voice lesson that the way she sang was "a discredit to the Negro race," adding that white people would never understand it.

This is one moment, not a refrain in her life, and that's a refreshing take in this season spotlighting Black women like Franklin, Billie Holiday and most recently, Tina Turner. Each of their treatments depict pain as an ongoing entity around which these artists had to navigate – and indeed, their tumultuous and abusive relationships with men in their lives loom large in their stories.

"Mahalia" explores the singer's talent as an extension of the happiness she drew from her faith, her kindheartedness and her humility. Gilois and Kreidler measure her life by way of her talent and her friendships, especially that of her friend Estelle, rendered in a warm, lively performance by Olivia Washington.

As a tradeoff the writers leap over entire segments of her career, omitting key relationships such as her early work with Thomas A. Dorsey, one of American music's most influential artists, while finding time and space to portray her friendship with Studs Terkel (Jim Thorburn). Each of these famous men figures prominently in Jackson's legend, and certainly Terkel should be there. It remains worth inquiring why Dorsey is erased.

Meanwhile auxiliary characters like Jackson's longtime pianist Mildred Falls (Joaquina Kalukango, Brooks' co-star in the Broadway production of "The Color Purple") are shortchanged of development and dimension, although Kalukango works wonders with what she's given.

Furthermore, Jackson's Civil Rights presence only shows up by way of her friendship with Martin Luther King, Jr. (Rob Demery), and even this plank is nailed in as something of an afterthought, essential as a way to include the fleeting moment everyone knows but few realize is attributable to her. The woman's voice that cries out, "Tell them about the dream, Martin. Tell them about the dream!" at during King's speech at 1963's March on Washington is Mahalia Jackson's, after all. And we see that for all of a few seconds.

Still, thanks to Brooks' resolute performance and Kenny Leon's sturdy directing style, "Mahalia" successfully argues for our attention. In the same way that Cynthia Erivo stellar work easily buys forgiveness of the many flaws in "Genius," Brooks reaches beyond the screen and grabs you every time she breaks into song, doubling that power to meet the grandeur of bigger stages. A lesser director would struggle to adequate frame that mighty power, but Leon rises to her level by matching her artistry with visual artfulness.

Here, too, the director finds a way to marry historic images into the present in a way that makes sense and fits the narrative. When Mahalia walks on stage at Carnegie Hall, for example, the scene cuts to black and white, marking this as a recreation of a photographed moment in history that also translates the emotional context of the story – she's scared.

It's the largest venue she's ever performed in, and her stage fright has rendered the world colorless. Then Brooks, as Mahalia, gazes upward and into the light pouring down from the ceiling, and the camera makes it look like carpet of power pouring down from heaven. That's when the color floods the picture and the singer, overcoming her fear, belts out the holy spirit.

Such scenes announce the higher role "Mahalia" plays as a parable about a Black woman's voice and identity, and how often and ferociously both are policed and diminished. Brooks give Mahalia Jackson her due by playing her as the titan she is while being honest about her internalized insecurity about her boldness and Blackness, which is relatable millions of people, but especially to women with similar life experiences to hers.

To those in awe of her musical contribution it's unbelievable that she had to be talked into playing one of America's most prestigious concert venues and not the other way around. It's equally as inspiring to watch her find her voice once she's there – not onstage, but before her performance, when she tells her adopted son to tell the concert promoter to bring the rest of her money in cash.

"It's Carnegie Hall, Mama," he replies with a laugh. Mahalia shrugs him off in a way that gladdens the heart as much as her singing and says, "I got to take me wherever I go."