On the Iron Anniversary of "Game of Thrones," here's hoping Joe Biden doesn't go Ned Stark on us 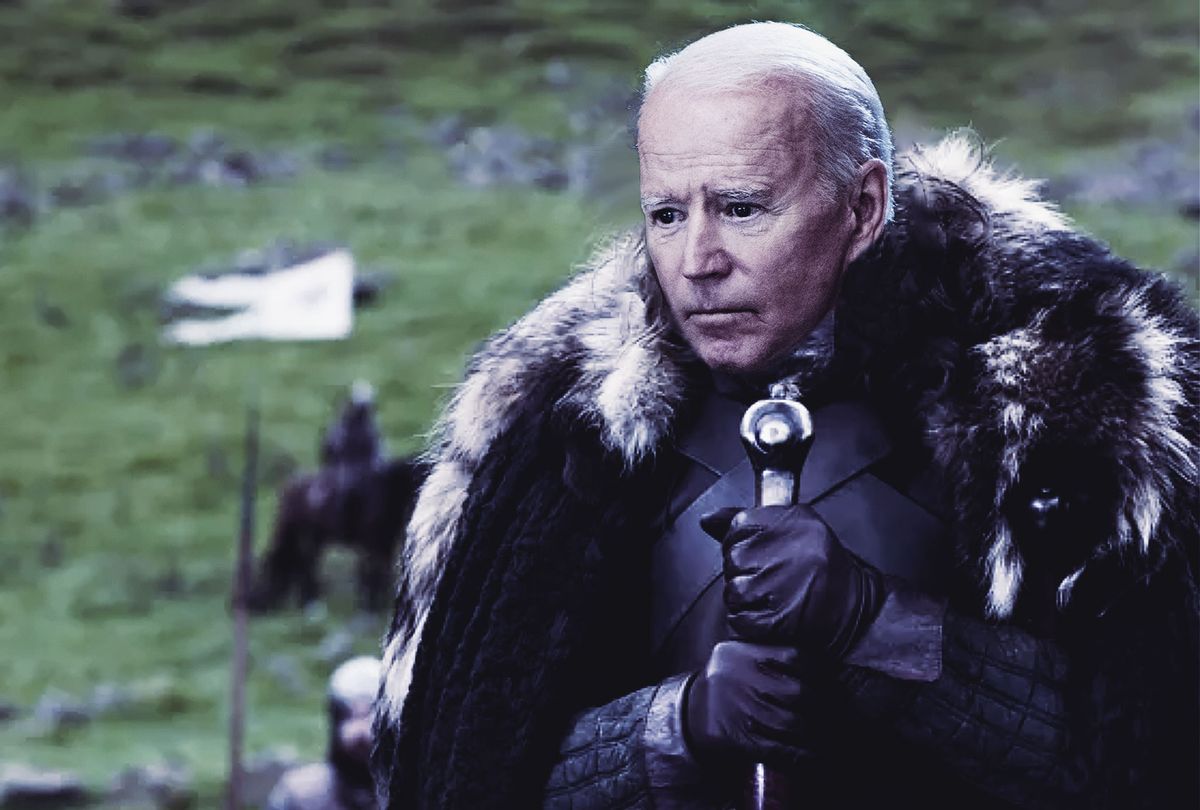 Ten years ago, and a few weeks after "Game of Thrones" premiered, the Internet in its infinite wisdom birthed the Stupid Ned Stark meme.

Such trifles usually have a limited shelf life, but not this one. Stupid Ned Stark popped up time and again, and usually after something terrible happened to one of his children or the smallfolk of Westeros.

Eddard "Ned" Stark, in case you've forgotten, was the Stark paterfamilias, Lord of Winterfell and bestie of King Robert Baratheon. He joined Robert in King's Landing to serve as his Hand following their mentor's mysterious death. Ned was warned several times and by a number of people to trust no one. His daughter Arya overheard plans to kill him. And everybody, I mean errybody, knew Queen Cersei and her family, the Lannisters, were a ruthless, duplicitous bunch not to be tested.

Regardless of all that when Ned discovered Cersei's children – and Robert's supposed heirs – were actually fathered by Cersei's brother Jaime, Neddy believed the noble and gracious thing to do was to confront the Queen with the truth and give her the opportunity to disappear in the night.

Then he placed his trust in another man to back his play — Littlefinger, a social-climbing Small Council member, brothel owner, and grudge-holder extraordinaire. Even Littlefinger warned Ned not to trust him, which was a kindness considering that Ned married the woman for whom Littlefinger carried a torch.

Ned Stark didn't even last a single season of "Game of Thrones." Imagine that. But Stupid Ned Stark resurfaced time and again as a reminder that everything that befell Westeros after he was gone could have been avoided if only the man hadn't assumed everyone abided by the same rules and moral codes.

Plenty of folks also assert that Ned wasn't stupid, but blinded by his sense of honor and his reliance on a system of laws and edicts that are only as durable as people deem them to be. But laws are nothing but words on paper. Flimsy, shreddable parchment.

Ignominious endings to shows and movies have a way of mind-wiping the details that are legitimately meaningful. Regardless of your opinion on how "Game of Thrones" concluded, I'm guessing most of us had stopped contemplating what George R.R. Martin and showrunners D.B. Weiss and David Benioff were saying about the nature of power well before the eighth and final season popped off.

Why get that deep? We had full-grown dragons burning cities and ice zombies pouring over borders. We raved over these spectacles and thought a lot more about individual characters and less about the system in which they operated. At the end of the day "Game of Thrones" is a fantasy show. Pure entertainment.

Still, there's a reason this epic was often invoked as a political apologue, especially in breakdowns of Beltway machinations. Cersei's famous declaration to dear dolt Ned that "When you play the game of thrones, you win or you die; there is no middle ground" is a succinct summary of right-wing strategy.

It's also fair warning to anyone attempting in good faith to find some non-existent middle ground and coax their adversaries to meet them there. Like, say, our current leader, President Joe Biden.

Biden's previous White House partner Barack Obama reportedly was a "Game of Thrones" fan, but I don't know whether it ranked among our current president's favorite shows. Based on previous coverage he was a "Veep" follower and loved "Parks and Recreation" enough to make a cameo appearance in an episode. (In a more recent story Dr. Jill Biden, our First Lady, confessed to having watched a bit of "Tiger King.")

Those comedies are fitting fare for a Democrat who assured people that Republicans would be willing to work with him once we was elected. Biden likened Trumpism to a fever that would break once 45 left office. For a time he also met every act of mass violence, hate crime and even the insurrection with a declaration that "this is not who we are."

Many people knew this was as unrealistic. Salon columnist Heather Digby Parton said as much in December:

Polling repeatedly shows that the public says it wants bipartisanship and compromise . . . But considering the scorched-earth practices of the GOP and the perennial anger among the base of the Democratic Party for its failure to "fight back," I have long suspected that what people really mean by compromise is for the other side to give in and do it their way. Bipartisanship is just a way of describing a surrender by your political opponents, where they sign on to your ideas.

To use a term Throneys understand, it's calling for unity when what you really want is for the other side to "bend the knee."

Since Biden has taken the reins he's adopted a more realistic tone and operated with worlds' more political savvy than old Ned, starting by pushing through the $1.9 trillion American Rescue Plan, a coronavirus relief package popular with Americans across the political spectrum, without getting a single Republican vote. He attempted to win bipartisan support, but when nobody crossed the aisle to get on the train it moved along anyway.

He's steamed ahead with ramping up vaccinations and lent his voice to condemning hate crimes against Asian Americans, likely strengthening the bipartisan support for the COVID-19 Hate Crimes Act that the Senate just passed. His approval rating is still above the 50% mark, and as a number of news outlets have pointed out, the right-wing media is having a hard time smearing his rep. Biden has actually achieved a few bipartisan victories.

But there are still so many ways in which his faith in bipartisanship could spear him in the thigh. The real Ned Stark tests will likely arrive in the tasks of taking on police reform and immigration-related legislation, especially related to our border policy.

Walking back his earlier pledge to raise the refugee admissions from the low 15,000 annual cap set by the previous xenophobic administration did him no favors. Although the White House changed its tune to say it would increase the cap by May 15 without specifying a number, it's plain to see that hesitancy was informed by fears of being seen as soft on border security and migration.

Biden has yet to personally address the nation about the importance of passing HR. 1, the For the People Act, and John Lewis Voting Rights Advancement Act, which would restore provisions of the Voting Rights Act that were gutted in 2013. This should be a simple action to undertake since both are countermeasures to thwart voter suppression and the disenfranchisement of marginalized communities.

With both parties hungrily gazing at midterm elections and the balance of power so precarious, don't be surprised if the dialogue slowly changes from what must happen to increased mentions of the word "compromise."

This month HBO is marketing the Iron Anniversary of "Game of Thrones," a decade since the show first introduced us to Ned Stark.  Looking back on our love affair for the show, it's simple to revel in our early adoration for Daenerys, how much of a boy Jon Snow was back then, how tiny Arya Stark looked before she morphed from a kitten chaser into a stone cold Night King killer. But the way things are going in our realm, and considering the seemingly insurmountable partisanship wounding us, revisiting Ned's doomed journey makes more sense.

Westeros is not a democracy. Presidents are not rulers, although try telling that to the White House's previous occupant. But where the Stark family's saga began contains some lessons we shouldn't forget.

The end of April also marks Biden's first 100 days in office. One hundred days is not a long time. Ned wasn't in King's Landing for very long either, and proved how quickly fortunes can reverse.

Within the same hour that Cersei uttered "you win or you die" we watched her successfully enact a coup; she finished off her husband, illegitimately place her son on the Iron Throne and had Ned branded a traitor — all after he warned her that he knew about her deceit. He tried handing her an official declaration signed by the dead king, and in full view of the court she theatrically ripped it to pieces, taunting the Lord of Winterfell for thinking paper would be a sufficient shield. Days later the smallfolk were cheering for Ned's death.

This is what happens when honorable people believe everyone wants to govern on behalf of the people more than control and profit off of them.

Maybe enough of us didn't understand that in 2011, finding it simpler and more fun to scoff at Stupid Ned Stark.

Looking back I, for one, don't think Ned was stupid. Naive is a better assessment. His downfall was his insistence upon believing in a version of the world that simply wasn't there anymore or never really existed in the first place. This is akin to the centrist's nostalgia for past eras when Democrats and Republicans were ideological opposites who still saw one another as colleagues, not mortal enemies.

We can look at all of this and hope that our sanest elected officials will use their power to make life better for the whole realm. And we'd be wise to never forget that winter is always coming. Always.