How not to talk about American racism: Tim Scott lures Democrats into a trap 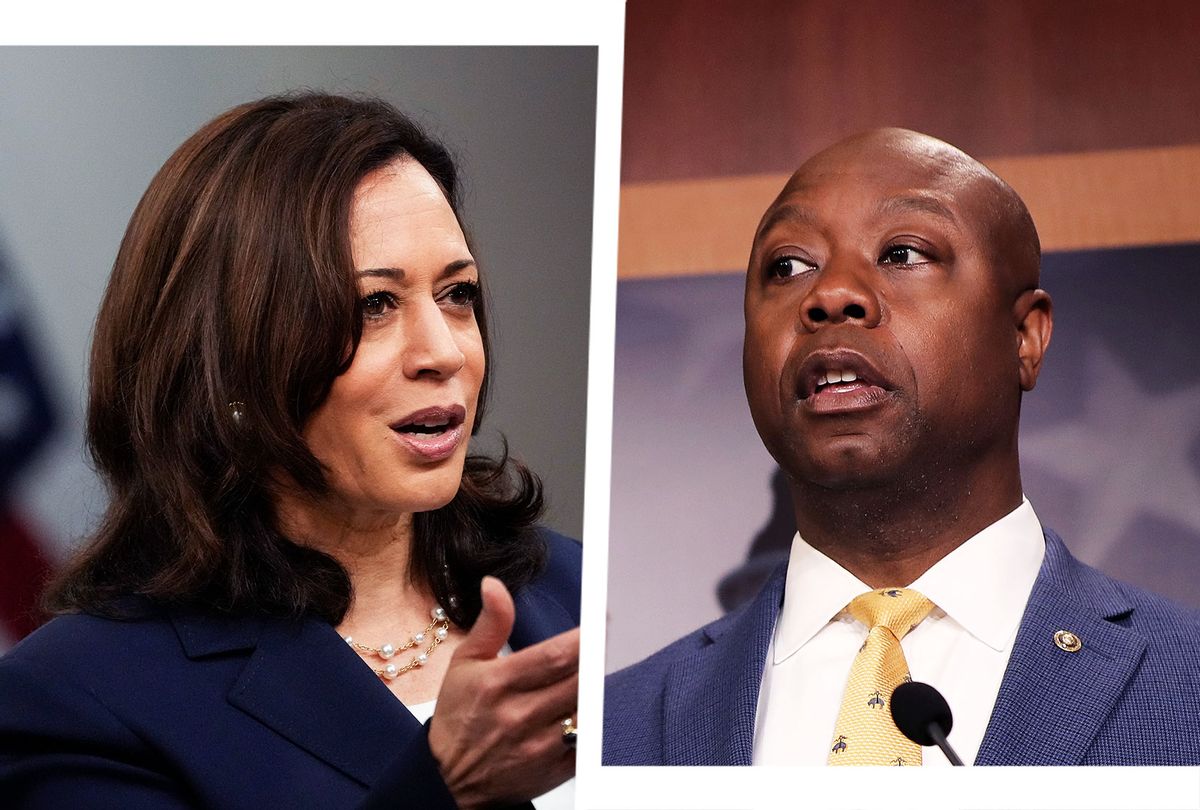 Following President Biden's speech to Congress last Wednesday, Scott was selected to give the Republican response.

In a wide-ranging rebuttal to Biden's discussion of race and racism, Scott offered a series of personal anecdotes:

Nowhere do we need common ground more desperately than in our discussions of race. I have experienced the pain of discrimination. I know what it feels like to be pulled over for no reason. To be followed around a store while I'm shopping. I remember, every morning, at the kitchen table, my grandfather would have the newspaper in his hands. Later, I realized he had never learned to read it. He just wanted to set the right example. I've also experienced a different kind of intolerance.

I get called "Uncle Tom" and the N-word — by 'progressives'! By liberals! Just last week, a national newspaper suggested my family's poverty was actually privilege because a relative owned land generations before my time. Believe me, I know our healing is not finished.

The climax of Scott's rebuttal to Biden's speech to Congress came with this proclamation: "Hear me clearly: America is not a racist country. It's backwards to fight discrimination with different discrimination. And it's wrong to try to use our painful past to dishonestly shut down debates in the present."

Scott's claims are internally incoherent. In his rebuttal as well as in others comments, Scott has repeatedly offered clear evidence that America is a "racist country."

Scott's real goal in his rebuttal to Biden's speech was not to tell the truth about racism and white supremacy, but instead to repeat Republican talking points about how Democrats and liberals are the "real racists" in America. Scott says such a thing with deep commitment and a straight face, even as today's Republican Party is trying to impose a new version of Jim Crow American apartheid on Black and brown people across the country.

Scott's speech may have been chock full of GOP talking points, but there was an old favorite that wasn't explicitly deployed but was obviously implied. In the aftermath of the Trump presidency, the coronavirus pandemic, and the racial justice protests that exploded across the country after the murder of George Floyd, America embarked on a fragile but badly needed racial reckoning. White conservatives needed someone to tell them that they weren't racists resisting a changing world, but rather the progress on racial equality was something that was being inflicted on them. The GOP needed a Black friend. By laundering and displaying the party's tired talking points, Sen. Scott served as just that. His speech gave white conservatives cover. After all, we all know that it's impossible to be racist if you happen to have a Black friend.

Scott and his allies are wily. He set an obvious trap for the Democrats, one that America's mainstream news media was eager to help facilitate. As they so often do, the Democrats blundered into it.

Answering the ludicrous question "Is America a racist country?" is now a gauntlet that the American news media is forcing prominent Democrats to run through.

In an interview that aired last Friday on NBC's "Today" show, President Biden responded this way:

No. I don't think the American people are racist, but I think after 400 years, African Americans have been left in a position where they are so far behind the eight ball in terms of education and health, in terms of opportunity. I don't think America is racist, but I think the overhang from all of the Jim Crow and before that, slavery, have had a cost and we have to deal with it.

In an appearance last Thursday on ABC's "Good Morning America," Vice President Kamala Harris offered this answer to the same question: "No. I don't think America is a racist country, but we also do have to speak truth about the history of racism in our country and its existence today. I applaud the president for always having the ability and the courage, frankly, to speak the truth about it."

On Twitter, Princeton University professor and activist Keeanga-Yamahtta Taylor highlighted the tensions and contradictions of Biden and Harris' comments:

Democrats want it both ways ... they want to curry favor with the mov't by decrying "systemic racism" while Biden claims no one is racist and Harris says the US is not a racist country ... someone smarter than me please explain how all of this can be true???

On the most basic level, "Is America a racist country?" is a dunderheaded question, one that suggests there must be a simple answer to describe a complex reality. The question is also tainted at its origins: Republicans and other members of the white right who ask such a thing are not actually committed to creating a true multiracial democracy and to defending Black and brown people's equal human and civil rights.

"Is America a racist country?" is also an updated version of the empty patriotism embodied by such right-wing slogans and threats as "America! Love it or Leave it!" and, for that matter, "Make America Great Again." It is also stained by a long history in which the civil rights movement and the Black Freedom Struggle (along with other pro-democracy and progressive struggles) were attacked by white conservatives as "socialist" or "communist."

"Is America a racist country?" is just another example of the way right-wing authoritarians reject critical thinking as being somehow disloyal or unpatriotic.

For Democrats and others on the left, there is another aspect to the "racist country" trap as well. There is no answer that will satisfy those people who have already decided that you are guilty.

In that way, "Is America a racist country?" is the political equivalent of being asked in court when you stopped beating your wife.

The most important problem with "Is America a racist country?" is that the question itself is based on a malicious and grossly incorrect set of assumptions. Racism is not an opinion. It is a fact. Moreover, the fact that America is a racist society, and that racism and white supremacy negatively impact the life chances of Black and brown people, is one of the most overdetermined and repeated findings of social scientists and other experts.

One can reasonably discuss the dimensions and varieties of racism in America, and how it contours and structures American society to the benefit of white people and the disadvantage of black and brown people. One can also reasonably discuss questions of data and discover new insights from history. One can have a productive discussion about whether and how America can be redeemed from its racist origins.

But the fact and reality of racism and other systems of privilege is that such systems of power give unearned advantages to those individuals and groups defined as being "white," as compared to nonwhites. That is a settled question.

Who is the audience for the public ritual of asking and answering this question?

Today's Republican Party is a white supremacist organization. When Tim Scott, Donald Trump, Lindsey Graham, Ron DeSantis and other prominent Jim Crow Republicans and Trumpists offer their thoughts about racism in America, they are speaking almost exclusively to racially resentful or outright racist white people — because those people are the foundation of the contemporary Republican Party and the Trump movement.

As public opinion polls and other research shows, a high percentage of white Americans, especially white Republican voters, actually believe that "racism" against white people is as big a problem, if not bigger, than racism against Black and brown people. This same public is also being radicalized into accepting and in some cases participating in acts of white supremacist terrorism and other forms of violent extremism by Fox News and the right-wing echo chamber.

Many white Americans are also motivated by white grievance and white victimology, and by "culture war" issues more generally. "Is America a racist country?" is part of the same white right-wing fantasy world where "political correctness," "cancel culture," "critical race theory" and "wokeness" are all part of some Stalinist or Maoist re-education program to oppress or destroy white people.

What matters most for the creators and directors of the "racist country" political theater is to validate white racial anxiety and the fear of being "replaced" by nonwhite people.

When Biden, Harris and other leading Democrats and voices are asked "Is America a racist country?" their intended audience is the public at large. Democrats also face a particular challenge in answering that kind of question because the Republican Party and the right-wing media have spent decades branding them as "un-American," "anti-white" and unpatriotic.

The Democratic Party is a multiracial coalition: White Democrats are much more likely to acknowledge that racism and white supremacy are deadly realities in America than are white Republicans. As for the Democrats' most loyal base, African-American voters, they have centuries of experience in navigating and trying to survive American racism. As a group, Black and brown people understand intimately that America is a racist country.

Nonetheless, Biden, Harris and other leading Democrats must still be careful in addressing the "racist country" attack.

Writing at the Washington Post, Karen Attiah warns that "Republican denial is a familiar story," and goes on to address Harris' comments:

Let's stipulate that as a Black and South Asian woman, Harris has to perform a delicate dance as vice president. And the past few years have certainly seen the proliferation of weird word salads to avoid the word "racist" in media and politics. (Yes, "racially tinged," "racially charged" and "implicitly biased," I'm looking at y'all.) Harris didn't get where she is by not knowing where our traps and tripwires lie.

Still, did she have to take a cue from Scott's tap-dancing on race? Let me venture out on an extremely sturdy limb here: Harris absolutely knows that America remains a racist country. More than that, her denial of it is harmful.

When a Democrat is asked by a compliant member of the news media whether America is a racist country, how should they respond?

Primarily, they should avoid yes or no answers to such a silly question. A longer, better answer might be something like this: "Real patriotism means dealing with the truth and not lying to yourself or other Americans about it. I want America to be a better country. Solving the problem of racism is part of that commitment. Fighting back against racism and white supremacy is a patriotic act."