GOP leaders have a symbiotic relationship with the Republican Troll Queen 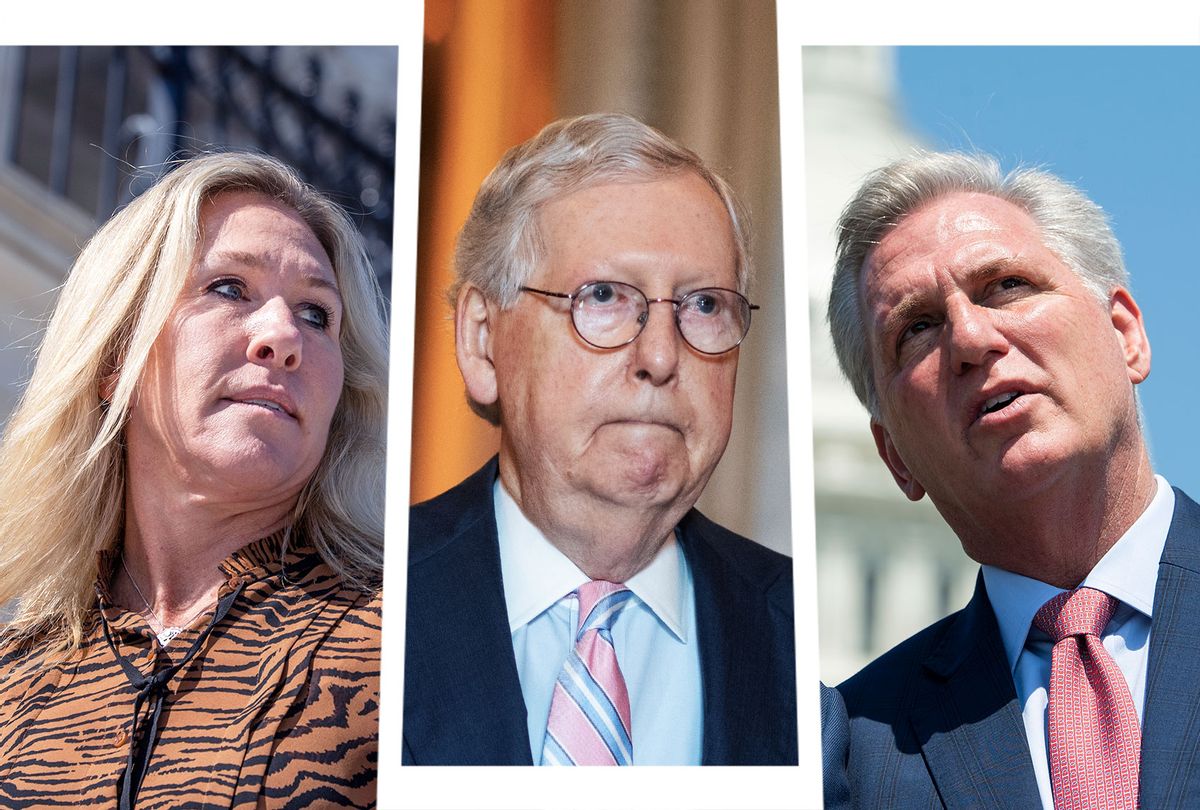 Rep. Marjorie Taylor Greene, like a cat peeing on your bed, has found the most surefire way to get that sweet, sweet attention she craves: Holocaust comparisons.

It started last week when the QAnon congresswoman from Georgia made a glib and risible comparison between an ongoing mask mandate in the House of Representatives — necessary only because GOP congressional members refuse to get COVID-19 vaccines (or admit they did, anyway) — to literal genocide.

"[W]e can look back at a time in history where people were told to wear a gold star, and they were definitely treated like second class citizens, so much so that they were put in trains and taken to gas chambers in Nazi Germany," she told a host on Real America's Voice, whose name makes the "far-right network" descriptor redundant. "And this is exactly the type of abuse that Nancy Pelosi is talking about."

Spoken like a spoiled rich girl who thinks she's being murdered because Daddy made her drive the Benz instead of the Jaguar this weekend. And considering Taylor Greene's background, it checks out.

Her comments drew exactly the reaction Greene clearly desired: Anger and outrage from liberals — and just the right Republicans. Having gotten exactly what she wanted, Greene took another bite at the apple on Tuesday, tweeting some more garbage about how vaccination requirements are also the Holocaust.

Republican leaders actually benefit from Greene's trollish antics and have no reason to get in her way. They have a symbiotic relationship with Greene. Everyone reaps rewards from this little game, where she acts like a brat and they pretend to disapprove. So there's no reason for anyone in leadership to actually take action to stop her trolling.

So Greene is now Queen of the Right-Wing Trolls.

She's getting exactly what she wants: attention and loads of cash from a GOP base whose only priority is triggering liberals. Republican leaders, on the other hand, can take advantage of the way that Greene's ridiculousness degrades the overall political discourse, making it much easier for them to pursue their main goals, which are undermining democracy and securing their grip on power with permanent minority rule.

Greene's Holocaust comments are a strategy directly out of the standard right-wing troll handbook, which is to project your own sins on your opponents, ideally in the most facetious way possible. Call it the "I know you are but what am I" troll. It is, notably, Donald Trump's favorite. With the orange goblin, every accusation was a confession, from calling progressive people of color "racist" to calling Hillary Clinton "corrupt" to accusing Barack Obama of cheating through college to making fun of other people's looks and body size.

The "no you're the puppet!" strategy is childish and blunt, but it is surprisingly effective. It exploits the mainstream media's yearning for a "both sides" narrative, where the fact that both sides are making accusations can be reported, all without having to bother to litigate who is telling the truth. It causes centrists to throw up their hands and condemn everyone in politics for being hyperbolic. It sows exactly the sort of cynicism that authoritarianism needs to thrive.

We can see how this works with Greene's Holocaust troll. By accusing Democrats of being Nazis in the most ridiculous fashion possible, Greene helps advance the idea that calling your opponent a fascist is inherently the act of silly, unserious people. That enormously benefits Republican leaders, who are currently in the process of doing something that is pretty damn fascist, which is engaging in a widespread effort to erase the history of Trump attempting to overturn the 2020 election, which resulted in a violent insurrection on January 6. This is coupled with efforts to complete Trump's work by making sure that the voters cannot decide the winner of the 2024 election.

Obviously, no one is saying that Republicans are doing anything like the Holocaust, but there also should be no denying that Trumpism shares its DNA — yearnings for a white ethnostate, an authoritarian desire for minority control — with fascist movements of the past. That's why Republicans are only too happy to condemn Greene, because it gives them an opportunity to advance this broader notion that any such comparisons are permanently off-limits, no matter how accurate.

We can see how Republicans are exploiting Greene to advance this "both sides do it" narrative in McCarthy's condemnation of Greene. "Anti-Semitism is on the rise in the Democrat Party and is completely ignored by Speaker Nancy Pelosi," he wrote. House Minority Whip Rep. Steve Scalise also tried to put this on his political opposition, releasing a statement condemning "the dangerous anti-Semitism that is growing in our streets and in the Democrat party."

There have absolutely been anti-Semitic attacks in the U.S., committed by people who are using the recent violence in Israel as an excuse. But it's flat-out false to blame Democratic politicians, who have not in any way equated criticism of the Israeli government with some kind of broad attack on Jewish people. All that's happening here is Republicans are cynically collapsing the distinction between criticism of Israel's actions and anti-Semitism, and using genuinely anti-Semitic rhetoric — Greene's mask and vaccine comments — as cover.

That's how this game works and why Republicans rarely do anything more than offer bland and unconvincing admonishments to their most obnoxious trolls. Trolls like Greene are a huge boon to the GOP. They, as Steve Bannon famously said, "flood the zone with shit," degrading the larger political discourse so that rational discussion becomes impossible. The collapse of good faith discourse benefits Republicans, who know that their policies, much less their anti-democratic agenda, cannot hold up under scrutiny.

Greene might be an embarrassing figure, but as someone who can further the goal of decimating all rational debate in the U.S., she's as good as gold to the GOP. Republicans are going to let her keep doing her thing, saying terrible things and getting attention for as long as she likes. Why wouldn't they? They're the ones who are benefitting.