What if Washington were an action hero? With chainsaws? Netflix's patriotic cartoon gives answers we never wanted 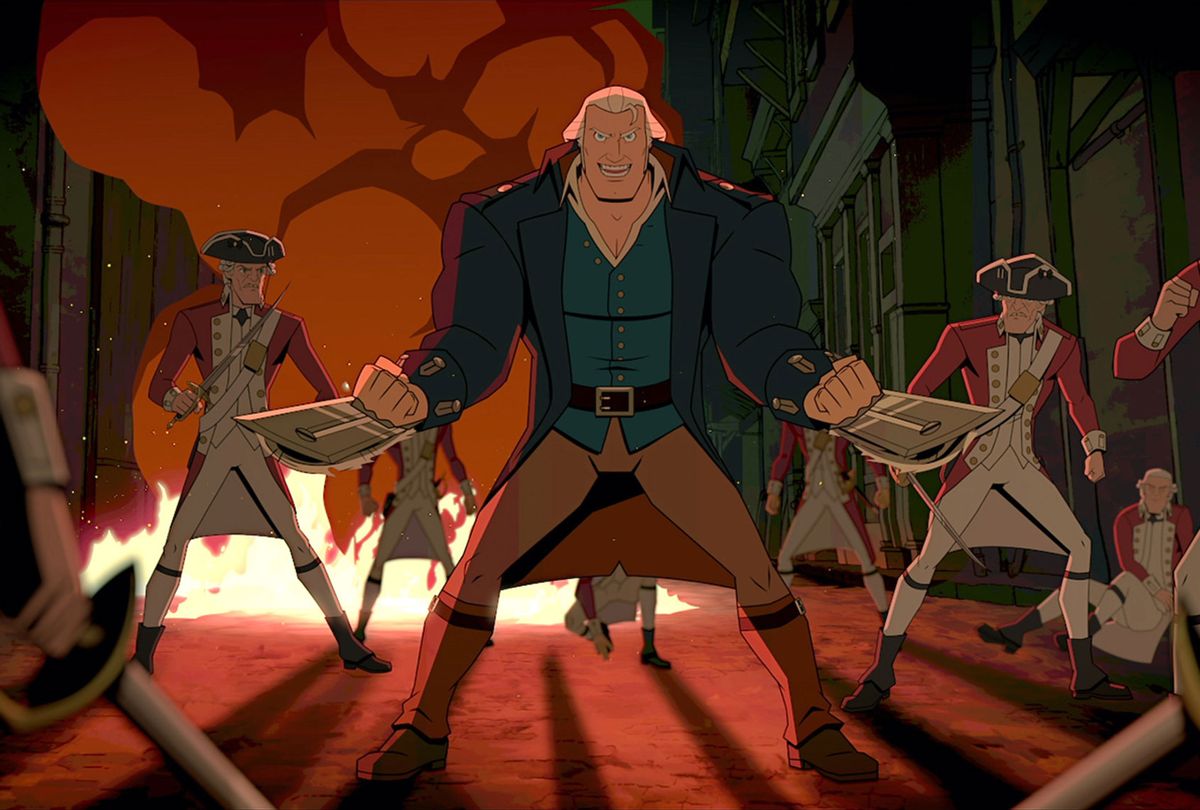 Channing Tatum as the voice of George Washington in "America: The Motion Picture" (Netflix)
--

None of the events depicted in Netflix's newly released "America: The Motion Picture" are accurate depictions of any concrete version reality we know. OK? For the love of all that is pure and good, please know this.

A few years ago I would have taken it for granted this would be obvious to everyone. We're talking about a cartoon movie that depicts Abraham Lincoln's funeral as having been attended by Martin Luther King, Jr. and Marilyn Monroe, and has George Washington consulting I.M. Pei on how the Lincoln Memorial should look. The level of revisionism at work here isn't merely absurd, it's insane.

However, this movie arrives less than two weeks after Congress and President Biden officially made Juneteenth a holiday while, at the state level, conservatives are campaigning to prevent schools from teaching the children the truth about how and why Juneteenth became a holiday.

Still think that I'm taking this all too seriously? Allow me to remind you about Reagan Escudé, student.

Name not ringing a bell? This Shreveport, Louisiana, native and bright beacon of our future spoke at a Trump rally last year and hailed Aunt Jemima, fictional character and racist breakfast mascot, as "the picture of the American dream. She was a freed slave who went on to be the face of the pancake syrup that we love and we have in our pantries today."

What I'm saying is that a huge swath of this nation really is that dumb, and not only that, dedicated to preserving their ignorance and passing that ignorance down to their children.

Those are precisely the sort of stone-cold imbeciles who would rather believe the most far-fetched nonsense about our history than study and learn the truth of it. Ergo, an additional burden falls to the rest of us to explain that this is not some kind of "Schoolhouse Rock" equivalent or a Cliff's Notes version of the events leading up to the signing of the Declaration of Independence. And that George Washington never dual-wielded chainsaws, and wasn't alive at the same time as Thomas Edison, who never invented gloves that shoot lightning.

Perhaps you find all this to be a bit mean-spirited, but please understand that this is precisely the audience to which director Matt Thompson ("Frisky Dingo," "Archer") and screenwriter David Callaham are speaking. Rarely have I seen a movie so confident that its viewers not only revel in American benightedness but are eager to identify with it.

That makes "America: The Motion Picture" not only a waste of time but an insult to ignoramuses.

Even among those who get the joke, to use that term quite liberally, it barely qualifies as a contender for an eighth of anyone's attention over July 4th weekend. And as an avid fan of some of Thompson's other work, this is most disappointing.

The intent itself is creative, and the underlying meta-commentary is clever and somewhat sobering. The movie imagines the events leading up to the Revolutionary War and a handful of historical figures as action heroes playing through versions of popcorn flicks profoundly embedded into American identity.

In its vision George Washington (Channing Tatum) and Abraham Lincoln (Will Forte) are best friends, so when Washington witnesses Lincoln's assassination at the hands of Benedict Arnold (Andy Samberg), he embarks on a vengeance crusade – not just for himself, but for what will soon be known as America.

So he assembles an inclusionary super-squad consisting of racist, keg-chugging frat bro Samuel Adams (Jason Mantzoukas); idiot savant horseman Paul Revere (Bobby Moynihan); Thomas Edison – who dude, bro, get this, is, like a girl and stuff (Olivia Munn)? He also lures Geronimo (Raoul Max Trujillo) along for the ride as well as a character officially known as Blacksmith for stunningly lowbrow reasons (and voiced by Killer Mike) but is recognizable as some version of the legendary John Henry.

"America: The Motion Picture" isn't entirely bereft of cleverness. Someone shrewder could have made better use of its marriage of history and blockbuster cinema to comment on our addiction to violent, explosive versions of American mythmaking. They may have more effectively parodied the tendency of the same folks who don't understand that the Gettysburg Address was not an actual address to seek out deeper philosophical meaning in diversionary trifles like "The Transporter" or any of the "Fast and Furious" movies.

Instead it's playing to rubes given to happily pointing and yelling, "OMG . . . they're, like, joking on 'Star Wars' right there!" Which is fine and admittedly fun if your can manage to switch off your innate critical thinking skills. Do that, and you may enjoy a few legitimately hysterical gags within this feature.

Nevertheless, after a point the sheer length of this disaster defeats whatever joy you might wring from it. "America: The Motion Picture" stretches a gag that's worth 45 minutes, tops, to a spirit-murdering hour and 38 minutes. Props to Matt Thompson for showing the world that some antics aren't worth the marathon treatment when a 100-yard dash will do.

Stupid comedies have their place, understand. I have a soft spot for some real mind-rotters, all of which help me turn off my brain and just yuk it up for a while. Everybody needs that. But "America: The Motion Picture" never achieves that level of necessity or sustains whatever glimmers of substance poking through because it meets the intended targets of its joke at their level. If this were a smarter nation maybe that would be enough to make me laugh – but we're not, and that's simply depressing.

"America: The Motion Picture" is now streaming on Netflix.