From Afghanistan to vaccines to the 2020 election, Republicans petulantly pick childish fantasies over reality 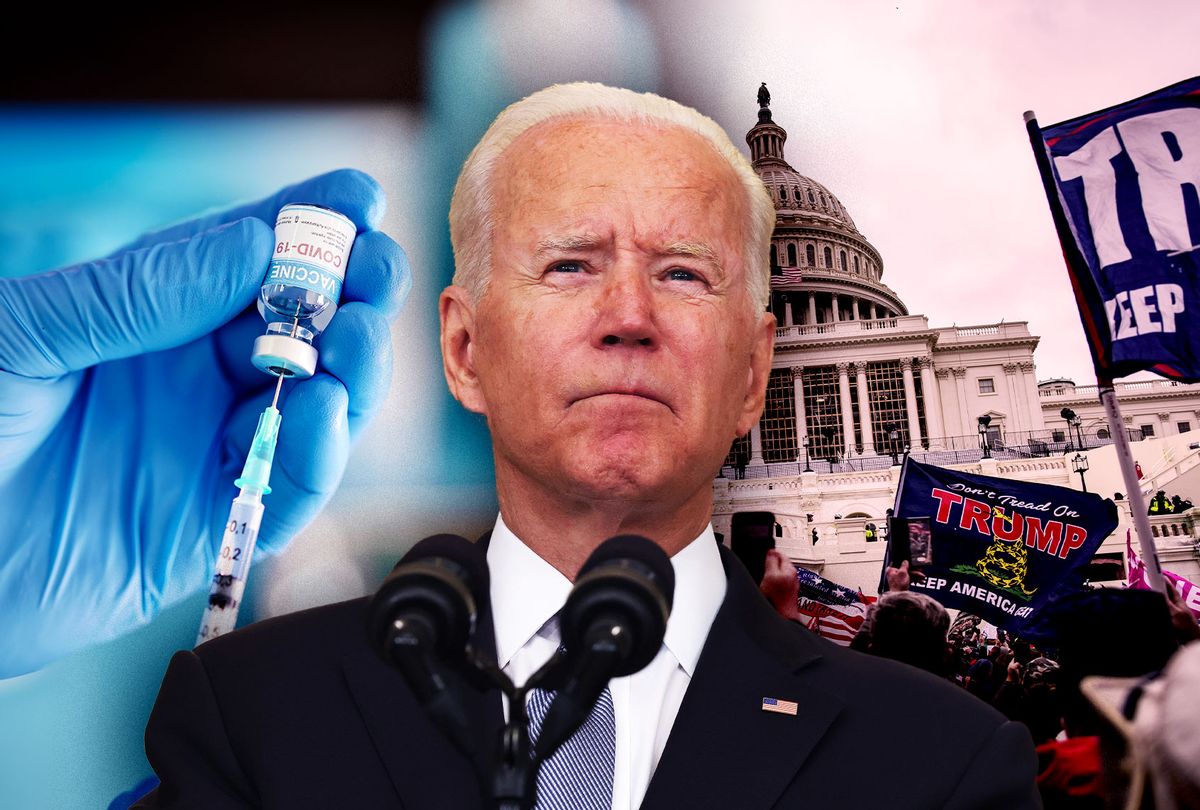 The most striking thing about President Joe Biden's Tuesday speech about the sudden fall of Afghanistan to the Taliban was the underlying message to his Republican critics and their handmaidens in the Beltway press corp: Jesus Christ, start acting your age already.

"I want to remind everyone how we got here, and what America's interests are in Afghanistan," Biden said before he went on to level with viewers about how he "came to understand firsthand what was and was not possible in Afghanistan."

"Staying and fighting indefinitely in a conflict that is not in the national interest of the United States" is no longer acceptable, Biden made clear.

It was sober-minded, realistic and frank. It's time now for the so-called adults to put away their G.I. Joes. Action movies are fun, but this is real life, and in real life, there are some problems that can't be fixed by rallying around the flag and punching the bad guys. It is time, in other words, to grow up.

Now contrast that with the infamous moment 16 months ago, when Donald Trump, faced with the early stages of the COVID-19 pandemic, declared that he had a "good you-know-what" while pointing at his head, and wondered out loud why doctors hadn't considered curing the disease by "cleaning" the lungs with an "injection" of bleach or other household disinfectants. (Reason: Those are poisons that would kill you.)

The gulf between the two men is tremendous in many ways, but this may be the biggest: Biden, when faced with an ugly but unavoidable situation, not only has the steel to make the hard decision but expects Americans to be mature adults about why things are the way they are. Trump, on the other hand, when faced with a similarly tough set of circumstances, spins off into a puerile fantasy where one quick fix makes it all go away.

And now the press is having a tantrum of their own in the face of Biden's tough words about how Afghanistan was always going to fail. But Biden's speech was a cold reminder that now, more than ever, is the time for Americans to set aside childish things and act like adults. It's not just about finally putting those cartoon fantasies about benevolent American imperialism in the past. It's about having a clear-eyed view of what a mess our country has become — from the pandemic to our crumbling infrastructure to our threatened democracy — and being able to roll up our sleeves, take responsibility, and get done what needs to be done.

Unfortunately, we have a serious obstacle to acting like a grown ass country: A loud-mouthed Republican minority who, like toddlers who refuse to put their pants on, insist on having a full-blown whiny baby tantrum.

This is seen most clearly in the fight over vaccinations. For months, the Biden administration relied on the hope that Americans would have the baseline sense of responsibility, to themselves and others, necessary to suck it up and get their shots so that this pandemic could be brought to an end. Most Americans — 62% of adults are now fully vaccinated — rose to the challenge. Unfortunately, the exception, as has been well-documented, is right-wing America. Instead of just getting vaccinated, about half of them are acting like 4-year-olds being asked to eat their broccoli, throwing food around and screaming "I won't do what you tell me, Mommy!"

And they're being indulged by GOP leaders who gleefully conflate vaccine refusal with "freedom." But it's a child's view of freedom, one that rejects the sophisticated discourse around the balance between rights and responsibilities that constitutes citizenship in a free, democratic system. Instead, it is a 5-year-old's idea of "freedom," where one gets to write on the walls and pull little Susie's hair, and the teacher is just being a meanie when she says you have to sit in the corner until you learn how to treat other people with respect.

Because of this unwillingness to get a vaccine, which is truly the bare minimum for maintaining personal hygiene in the midst of a pandemic, the unvaccinated have allowed another surge of COVID-19 to wash over the country. Unfortunately, that also means a return to mask mandates and, increasingly, vaccine mandates to enter public places.

But, of course, right-wing America can't accept the consequences of their own actions. No, such a thing is reserved for grown-ups! Instead, we're facing another round of whining and crying from conservatives about the mask and vaccine mandates even though it is, quite literally, their fault that any of us have to keep dealing with this. They're like idiot kids who set off a stink bomb at the school dance and then wonder why they aren't allowed to come to the next one.

Similarly, polls continue to show that strong majorities of GOP voters flat-out refuse to accept that Biden beat Trump in the 2020 election. Instead, Republicans wallow in increasingly baroque and silly fantasies about hacked voting machines and Italian satellites — anything but just admit the obvious, which is that they lost the election fair and square.

Salon's reporter Zachary Petrizzo has been covering the latest wrinkle in Trump's Big Lie shenanigans, MyPillow CEO Mike Lindell's "cyber symposium" in South Dakota. Every day, it's another bewildering story of supposedly legal adults are engaged in an elaborate role-playing game where they cosplay as detectives supposedly uncovering some sinister conspiracy. But even making that comparison is an insult to actual role-players and cosplayers, who enjoy dressing up and playing games but are adults who know the difference between fantasy and reality.

It's no wonder, really, that Trump is so beloved by the increasingly infantile Republican base. He is a 7th grade boy's fantasy of a tough guy: Belligerent, boastful, and surrounded by beautiful women who are actually just paid to be there. But he is also lazy, incurious, and a bully. And, as the "inject bleach" moment showed, Trump never grew out of that phase where kids refuse to do the reading, hoping they can just B.S. their way through the book report when called on by the teacher.

Unfortunately, these folks don't just act like children. They have also been coddled like extremely spoiled children for far too long. It goes back to the early days of the Trump administration when reporters from coastal big cities fanned out over the "heartland" to ask Trump voters why they voted the way they did, like they were asking Little Timmy to explain his favorite action figure. And it continues to this day, with exhortations to be "patient" and "understanding" with vaccine refusers, even though they have already been told for the umpteenth time that vaccines are safe and don't turn you into human magnets. Over and over, liberals are asked to be gracious and accommodating, because conservatives are assumed to be children who can't be expected to sit still and mind their manners.

Biden's speech on Monday, hopefully, is part of a larger sea change away from that dynamic.

An American president is asking adults to act like adults — and yes, that includes Republicans. Certainly, the growing clamor for more vaccine mandates — which the majority of Americans support — shows that most of the rest of us are fed up with their babyish antics. If Republicans can't suck it up and act like adults of their own free will, well, they'll need to be put on a time-out until they can learn to behave.