Texas Gov. Greg Abbott's ban on vaccine mandates shows how much Republicans are betting on COVID-19 to win in 2022 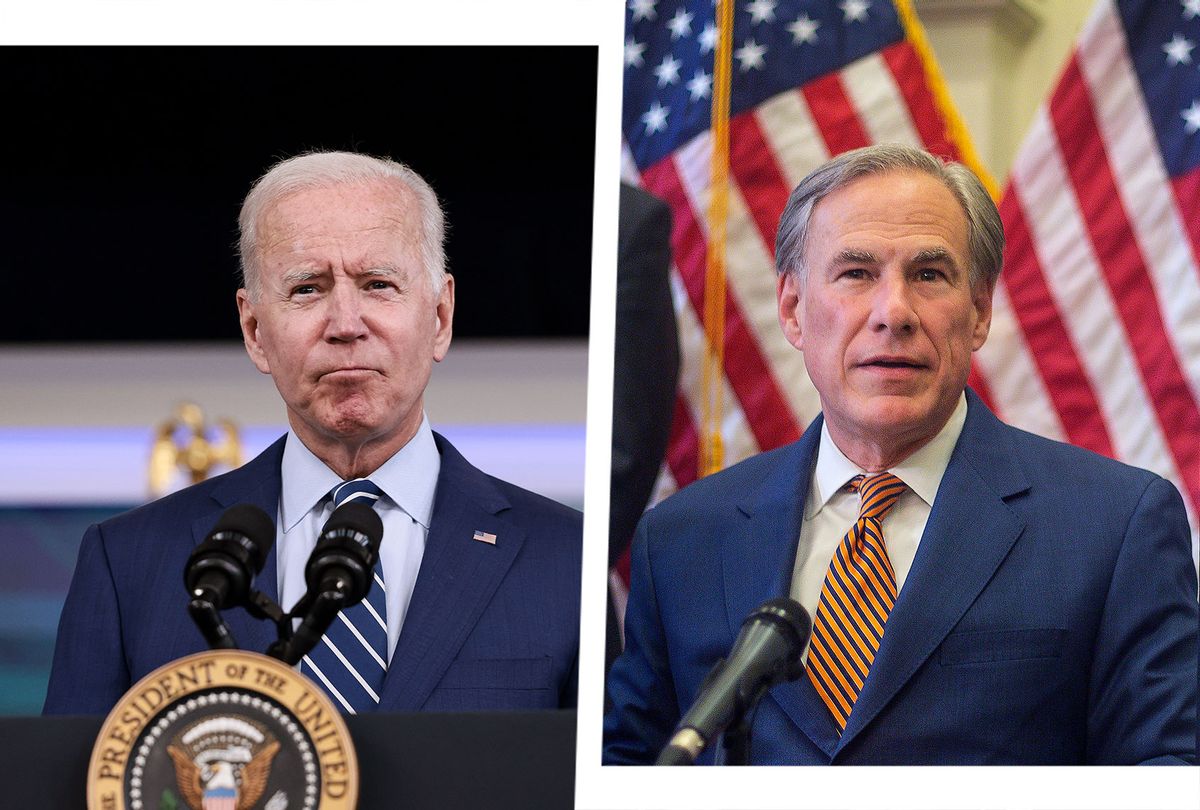 Gov. Greg Abbott of Texas, a Republican, has once again proven his stalwart commitment to aiding the virus that causes COVID-19 in its goal of spreading as far as possible. Late Monday, the Republican state leader issued an executive order banning all entities in the state — including private businesses — from requiring employees to be vaccinated against COVID-19. (All other vaccine requirements remain untouched, because the "principled opposition" to vaccine mandates is an inch deep.)

As many folks who wish hypocrisy still mattered have pointed out, Abbott's ban violates his party's supposed commitment to a low regulatory environment for businesses by interfering with private businesses who wish to institute vaccine requirements. When it comes to the conflict between being pro-business and pro-virus, however, it was never any contest with Republicans. All other GOP principles fall before the newfound Republican commitment to making sure COVID-19 infects as many human bodies as it can.

Abbott, of course, did not admit that he was preventing businesses from enacting basic health and safety standards. Instead, he presented the ban as a defense of business, accusing President Joe Biden of "bullying many private entities into imposing COVID-19 vaccine mandates, causing workforce disruptions that threaten Texas's continued recovery." That's is just a small taste of the doublespeak that the entire executive order is written in.

Abbott is not standing up for businesses or the economy.

Biden's vaccine mandate was quietly welcomed by many businesses who want to have normalcy-returning mandates but want someone else to blame when Trumper employees whine about it. And their worry about worker shortages was unfounded, as most vaccine resistant workers will get the shot rather than lose their job. Abbott's claims about economic recovery are also hot air. The sluggish recovery is due to the ongoing pandemic and will only bounce back if more people get vaccinated.

No, it's quite clear what's going on and has been going on with Republicans fighting every effort to get the pandemic under control: The GOP wants to prolong the pandemic because they think doing so will help them in the 2022 midterms.

Abbott himself is up for reelection in 2022, and, at first blush, it might seem a weird strategy to practically make the virus his running mate. (Though the coronavirus has tough competition in an "ew, gross" contest with Texas Lt. Gov. Dan Patrick.) But Abbott is making a smart, if deeply evil and downright murderous, bet. Voters, especially fairweather voters, tend to blame everything on the party that controls the White House, even if the blame for any problem actually falls on the opposition. If the pandemic is still a problem in November 2022, then there's a very real chance that large numbers of Democratic voters, already demoralized by the lack of legislative progress on other fronts, simply won't show up to vote. That will make it easier for Republicans to sweep the midterms.

A new Axios-Ipsos poll demonstrates that the "prolong the pandemic" strategy is working for Republicans. Trust in Biden on the pandemic has fallen to 42%, down 10 points from where it was 6 months ago. Most of the trust has slipped with Democrats and independent voters. Americans are also getting depressed, with 30% saying it will be more than a year before life returns to normal, which is triple what the number from June.

The COVID-19 culture war isn't just demoralizing Democratic and potential Democratic voters. It appears GOP leadership sees this issue as a way to invigorate their own base, whose entire political reason for existing is increasingly just to "own the liberals."

Anti-vaccine and anti-mask protests, which are getting rowdy and even violent, started off as a classic right-wing Astroturfed phenomenon, but it's since gained a lot of traction among ordinary conservatives who aren't getting paid to throw tantrums at perplexed school board members. Culture war provocations over Dr. Seuss and Mr. Potato Head floated earlier this year by Fox News weren't getting the job done — but freaking out over masks and shots really gets the juices going for the worst Americans, i.e. the people the GOP needs to turn out at the polls.

Vaccine mandates are a threat to the "victory through infecting our own voters with COVID-19" strategy for Republicans, for one simple reason: They work. As a White House report released last week details, "organizations with vaccination requirements have seen their vaccination rates increase by more than 20 percentage points and have routinely seen their share of fully vaccinated workers rise above 90%." Despite conservatives floating threats of mass walkouts, the paper-thin "principled" opposition to vaccines disappears the second that conservatives face an actual consequence for refusing to vaccinate.

The Biden administration has fallen far short of where it should be in terms of vaccine mandates, both slow-walking the employer mandates and completely sidestepping the possibility of banning the unvaccinated from planes before the holidays. Still, even the threat of vaccine mandates is starting to have an impact. As the report notes, the rate of unvaccinated Americans has been cut by one-third since Biden first started issuing mandates.

Republicans are in a race against time in their efforts to reduce vaccination rates to the point where the pandemic is still a live issue next November. COVID-19 rates are falling, down 24% in the past 14 days nationally and down 39% in Abbott's home state, which continues to have one of the highest COVID death rates in the nation. This is mostly because of vaccination, but also because so many Americans have been infected that it's adding to herd immunity. It's still unclear if there will be another winter surge or if the virus is finally running out of the unimmunized bodies it needs to remain a serious threat. There is a strong possibility that the end of the pandemic is closer than many Americans think.

So by making it as hard for Biden to get shots into arms faster, Republicans are keeping COVID-19 cases high to keep Biden's approval ratings low.

If that doesn't change — or if it gets worse with another surge — there's a very real chance that this pandemic makes the already dim prospects for Democrats in 2022 even worse. And that, in turn, sets the stage for Donald Trump to cheat his way back into the White House in 2024. So it's no wonder that power-hungry Republicans are betting big on their prolong the pandemic strategy, even if it comes at the cost of killing their own voters. Big risks lead to big rewards. For the Republicans, setting themselves up for permanent one-party minority rule is the biggest prize.