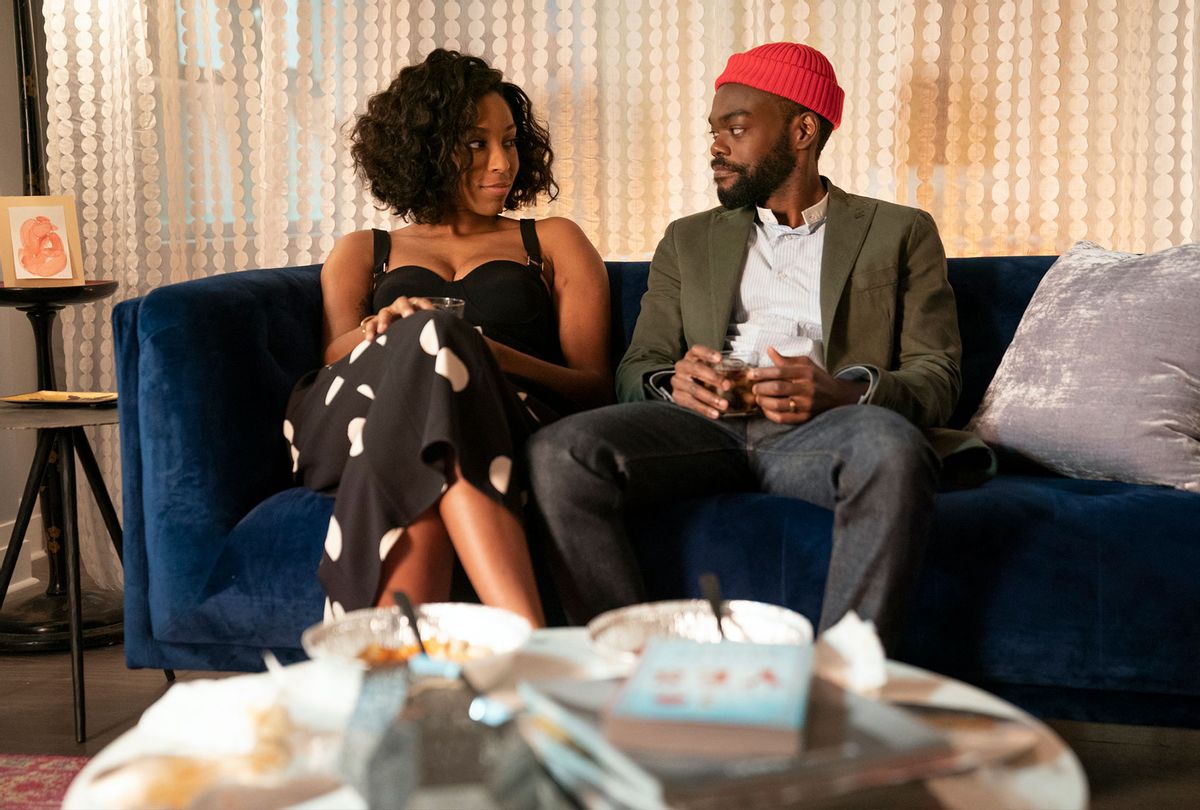 "Bud . . . Let me tell y'all something . . . You don't wanna be out here," Missouri shared, kicking off a red flag parade warning soon-to-be-divorced men to get used to concepts like turmeric and "chasing Cialis with Red Bull."

"You don't have the cholesterol to be out here," he cautions before dropping the line that sent giddy readers stampeding to Google:

In the installments that follow he resets his expectations and leaves emotional wreckage in his wake as he desperately tries to figure out who he is and what he wants. And it is this part of the show's sophomore reset that transforms it from an enjoyable, frothy romantic comedy into an engaging piece of societal analysis.

RELATED: What William Jackson Harper wants viewers to take away from "Underground Railroad"

Rom-coms are a white woman-centered genre. Sure, a few feature Black casts and a couple of box office bangers place Jennifer Lopez in the driver's seat. On the whole, however, we're conditioned to expect to follow someone like Anna Kendrick (who also executive produces the show) on some marshmallow-flavored journey through singlehood that ends in a version of contentment.

Season 1 confirms that reputation, although several Millennial-appropriate twists change things up from the Julia Roberts and Renee Zellweger eras. Kendrick's Darby Carter still ticks the usual boxes of a rom-com heroine, in that she comes from a solidly upper middle-class upbringing and has a challenging relationship with her mother. Surprise, surprise – this partly informs her low expectations of the men to whom she's attracted.

Fording those rapids by way of a TV series instead of a movie allows co-showrunners Bridget Bedard and series creator Sam Boyd to shove us face first into Darby's gritty frailty along with the psychological muck dripping off her nearest and dearest. Life changes for all of them over the course of a few years, and not always for the better. Some of her friends embrace adult responsibility more easily than others, and each accepts this doesn't necessarily require them to find their person. Eventually she does – because if she didn't, it wouldn't be a true rom-com.

Nevertheless, in the main "Love Life" preaches the wisdom of figuring ourselves out before we try to weld our lives to other people's. And this means different things for people like Marcus than it does for Darby, delineated for the viewer by Keith David's professorial narration.

Viewers already know Harper from "The Good Place," where his anxious, indecisive philosophy professor Chidi Anagonye fell for his supposed soul mate Eleanor Shellstrop, an uncultured mess played by Kristen Bell. Chidi and Eleanor came together in that show's version of the afterlife, a place where race never factors into their relationship.

Marcus, in contrast, must always consider his Blackness because New York and the rest of the world remind him of it at every turn. He's one of the very few Black guests at Darby's 2016 wedding reception, which is where we meet him. When fellow guest Mia Hines (Jessica Williams) commiserates with Marcus about what that feels like, he feels seen. But when Marcus points out his white wife to Mia, who offhandedly blurts, "Makes sense!" before vanishing in an Uber, he's suddenly left doubting the legitimacy of the view.

A number of series try to speak to the specific weight people of color carry into the dating pool, but the fact that this show deftly maintains its comedic buoyancy while making Marcus' search for love stand apart in a way that's captivating and ultimately heartening is noteworthy.

"Mixed-ish" writer Rachelle Williams joined the second season to share showrunner duties with Boyd and Bedard, and from its very first scenes her assured voice deftly incorporates Marcus into the familiar rom-com architecture without blandifying who he is.

At one point someone dubs Marcus an "off-brand Hugh Grant," but remove the insult from that label and you're basically describing Harper's warm appeal. He's an actor who personifies a refined, confident intellectual masculinity, and he stands out without needing to be the loudest voice in the room.

Marcus is, in fact, the type of safe, attentive and well-meaning romantic hero Grant honed to brilliance in '90s flicks like "Four Weddings and a Funeral" and "Notting Hill."  He isn't awkward, exactly; it's more like he's used to being in spaces traditionally thought of as being the province of people who are white and well-off while also being accustomed to being judged for that.

This surfaces as a no-win situation in Marcus' career as a book editor: he does his best to bring new Black authors into his mid-level publisher's fold, but his boss often rejects them while burying Marcus in assignments that are beneath him.

Meanwhile the writers he wants to champion expect him to be a sellout. "We need guys like you to translate guys like me," one emerging author (played by Jordan Rock) scoffs during a sit-down. By that the man means safe and non-threatening, name-dropping Barack Obama, Al Roker, LeVar Burton and Samuel L. Jackson as examples. That last one throws Marcus until the writer clears it up for him. "Do you think you get to go from 'Pulp Fiction' to Capital One if you really scare white people?"

Interracial relationships always provide a sore spot to poke within plots that are mindful and sensitive enough to dissect them instead of ignoring the challenges such pairings face, as most shows do. But "Love Life" isn't content to take the basic out of implying that Marcus' marital implosion is due to his wife Emily's (Maya Kazan) inability to relate to him, despite an exchange where she confirms his fears about the image he projects. (This happens in the premiere, which Williams co-wrote with Boyd.)

Mainly it is Marcus' very human tendency to doubt himself – where he's going with his career, whether he's with the right person – that gets him into trouble.

Sometimes in "Love Life" that notion relates to Marcus' Blackness, since his place in New York's social structure and his position in corporate culture force him to examine what that means and how other people relate to that part of him. Mia provides the catalyst for Marcus to ruminate on this simply by being charismatic and seductive; plus, Harper's onscreen chemistry with Williams is undeniable.

Williams established her rom-com bona fides as the lead of 2017's "The Incredible Jessica James," and the way she draws out the mystery of Mia is sublime. Her performance elicits questions because she speaks with an air of knowing, one of the surest signs that someone is hiding or overcompensating for something. But this is one of the factors making her a refreshing presence in Marcus' arc.

Harshening cultural forces in American society force a new certainty upon Marcus that comes to a head during the pandemic; like so many of us, he simply doesn't have the time or the patience for inconsiderate people anymore. And this is before the viral video recording George Floyd's murder reminds him how little so many people value of his life at all.

On a somewhat related note, among the most admirable aspects of this season is the way it looks at the much-vaunted notion of Black love via a subplot partnering Harper with a playwright played by "Saturday Night Live" star Ego Nwodim, and how that relationship proves that ideal is at once specific and real, and difficult to find and maintain.

Whether through Marcus or his sister Ida (Punkie Johnson), or his parents (Janet Hubert and John Jelks) and their decades-long marriage, or his settled-down friend Yogi (Chris Powell) "Love Life" suggests that any relationship's success has less to do with sharing your mate's culture than it does with understanding their soul, being aware of the ways they've been hurt in the past and accepting their flaws. That, along with refusing to settle for a union that has run its course, a sentiment that forcefully links the two seasons. Sharing a cultural shorthand as a baseline to relating to another person helps, of course – which the season also depicts quite well – but it isn't the sole guarantee of a relationship's success.

Marcus' situation takes a while to smooth out in the way that all rom-com adventures do. But the wonderful writing and a superb cast makes riding out the rough chop of modern romance at his side an absolute pleasure – so much, actually, that it may inspire newcomers to go back and consider Season 1.

"Love Life" doesn't make the being "out there" look any more enticing than it does for any other romantic hero or heroine. Instead it offers the theory that finding something better, whether in an existing relationship or a new one, starts by stepping into the unknown to figure out what you want and therefore, who you need. On the other hand, you don't want to be out there for a variety of reasons. Out there is uncomfortable. Sometimes, though, what's on the other side is worth the risk.