Who gets to play who on screen? The queer question of Julianna Margulies on "The Morning show" 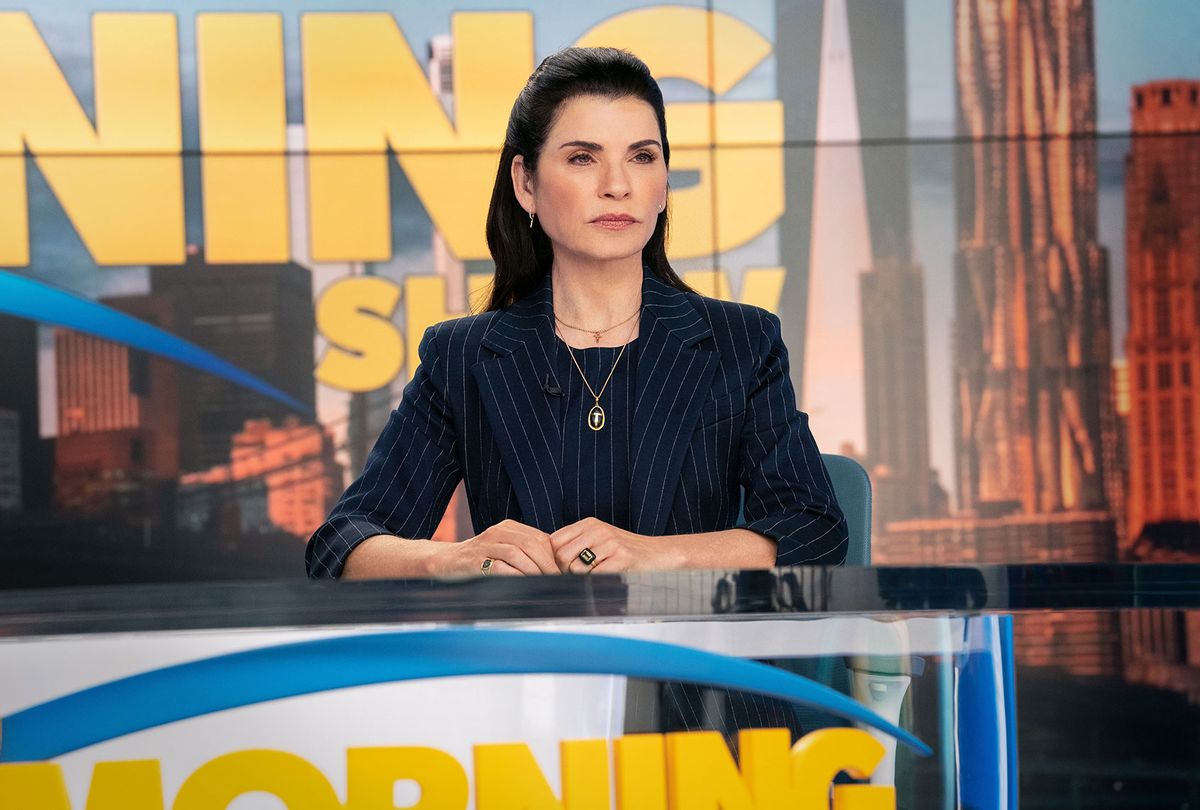 Among the many surprises of the second season of Apple TV+'s "The Morning Show" is Reese Witherspoon's Bradley Jackson exploring her fluid sexuality with another woman. Julianna Margulies' Laura Peterson is an out-and-proud lesbian journalist at the fictional UBA network who lost her job shortly after being outed in the '90s.

Laura manages to rise through the ranks at UBA over the years anyway, and her budding romance with Bradley is a bright spot in a chaotic season that follows the fictional morning show in disarray over much publicized revelations about endemic sexual misconduct and toxic workplace culture.

Since joining the star-studded cast of "The Morning Show," Margulies has already drawn significant praise and attention. But more recently, in an interview with "CBS Mornings", Margulies faced a tough question about whether an LGBTQ actress would have been able to better represent Laura on the show.

"I can understand that," Margulies said of the criticism. "My response would also be: We're all making assumptions as to who I am, and what my past is and what all of our pasts are."

Margulies continued and said she understands "I can't play a different race," but argued there should be fluidity and nuance in how we approach casting when it comes to other roles and identities.

"I am an actress, and I am supposed to embody another character. Whatever their sexuality is doesn't matter to me, the same way watching a gay person play a straight person," she said. "Are you telling me that because I'm a mother that I can never play a woman who has never had a child? Or, if you've never been married that you can't play a married woman?

"You have to be careful on where you're drawing the line there. We're actors. We're supposed to embody a character regardless of their sexuality. When it comes to race and gender, that's a whole different story, and I 100 percent agree with that."

Margulies' answer is part of a much larger conversation that's increasingly arisen in recent years, amid growing backlash against white actors playing characters of color or more privileged actors taking roles from marginalized actors in general. In 2018, Scarlett Johansson, a cisgender woman, accepted the role of a trans man before stepping down amid widespread criticism. Before that, Johansson had accepted the role of a character – who is an Asian woman in the original anime – for the 2017 adaptation "Ghost in the Shell" to similar backlash.

RELATED: Opiate for the masses: "Ghost in the Shell," "Iron Fist" and Hollywood's addiction to whitewashing

As much as we'd like to think of whitewashing and other identity-based blindspots in casting as a relic of the past, casting decisions like this continue to be made on a regular basis. Notably, just earlier this year, Sarah Paulson faced criticism for accepting the role of Linda Tripp in "Impeachment: American Crime Story." As Tripp, Paulson dons prosthetics and a fat suit to play a part that could have gone to a fat actress with fewer opportunities than Paulson has.

As demands for accurate representation, inclusive storytelling, and more roles for actors who aren't thin, cis, straight or white grow, we find the conversation increasingly returning to who can play who, and who can and can't reflect which experiences without taking away opportunities from those with less privilege.

It's not a new controversy or conversation, though more and more voices are chiming in.

Back in 1988, Tom Cruise's classic buddy-road trip movie "Rain Man," which follows Cruise as a car dealer whose brother Raymond, an autistic savant portrayed by the notably not autistic actor Dustin Hoffman, is gifted with a powerful eidetic memory that makes gambling easy. Since 1988, the movie has been criticized for neglecting to cast an autistic actor to portray Raymond, considering how sparse roles for actors with disabilities are. This also called into question about how accurate the portrayal was or whether it was just a performance of how neurotypical people see those on the spectrum.

Unfortunately, "Rain Man" wasn't just a product of its time in the 1980s. ABC medical drama "The Good Doctor" stars Freddie Highmore, who is neurotypical, as the brilliant autistic surgeon named Shaun Murphy. "The Good Doctor" continues to run today, and has received mixed reception from autistic critics, with some celebrating positive and accurate aspects of its representation of autistic people's experiences. But the fact remains that Highmore isn't autistic, and his role could have gone to someone who is.

Similarly, the 2019 movie "Sound of Metal" follows the life of a heavy metal drummer Ruben Stone, who begins to lose his hearing. The Oscar-nominated film cast deaf talent like actress Lauren Ridloff, but Riz Ahmed, who played Ruben, notably isn't deaf and prepared himself for the role by using hearing aids that play white noise to simulate deaf people's experiences, he told the New York Times.

Despite the research and effort Ahmed put in to do justice by the role, the fact remains that it's a role that could and should have gone to a deaf actor, or an actor with hearing loss struggles. When actors without disabilities play characters with disabilities, no matter how thoughtful or well researched their performance is, on some level, it will always be a sort of caricature of a marginalized experience. It is also perpetuating the practice of hiring able performers over those with disabilities in the industry.

"It wasn't done without thought. I also feel slightly like, is this a thing where our dance card has to be public?" Cumberbach said, answering the question with a question of his own. "Do we have to explain all our private moments in our sexual history? I don't think so."

Chloë Grace-Moretz, a vocal LGBTQ ally, faced a similar question in 2018, about her playing a gay teenager who's sent to gay conversion therapy camp in "The Miseducation of Cameron Post." She echoed Cumberbach's sentiments, telling The Independent that "across the board, don't assume," when it comes to any actor's sexuality.

"I would never want to tell a story that really should be told by somebody who's lived that experience," Stewart told Variety, unequivocally. "Having said that, it's a slippery slope conversation because that means I could never play another straight character if I'm going to hold everyone to the letter of this particular law. I think it's such a gray area."

Taking a stand for proper representation

Stewart and other stars and Hollywood A-listers who have weighed in on the matter are right that casting is a complex process that can certainly open the door for "gray areas" and "slippery slopes," when we sweepingly say that actors should only play characters they can fully represent from their own experiences. But we can't navigate these situations without addressing the long history of unequal opportunities, representation and power in the entertainment industry.

In 2017, Ed Skrein, a white actor, modeled the appropriate way to handle being cast for a character with an underrepresented experience. Upon learning that the character he had been cast for in a new installment of the "Hellboy" franchise actually had Asian heritage, Skrein stepped down "so the role can be cast appropriately." Whitewashing and greater issues of on-screen misrepresentation are endemic issues in Hollywood that are certainly perpetuated by casting directors, but also by actors with more privilege who take opportunities from marginalized actors.

Trans actors, actors of color, plus-size actors, and actors with disabilities will never have the same opportunities as white, cis, thin actors without disabilities. When more privileged actors take roles for characters who have these identities, they're often taking away from the limited opportunities available to people with less privilege. Like Margulies and other actors have noted, no one can possibly be expected to represent all of the identities and experiences of characters they play — that's not the issue. The real problem is when they take opportunities away from more marginalized actors. And in certain instances – as with whitewashing – it is taking away a chance to normalize the presence of those marginalized people on our screens and in our world.