Like COVID-19, the Black Death had its own "truther" movement, too 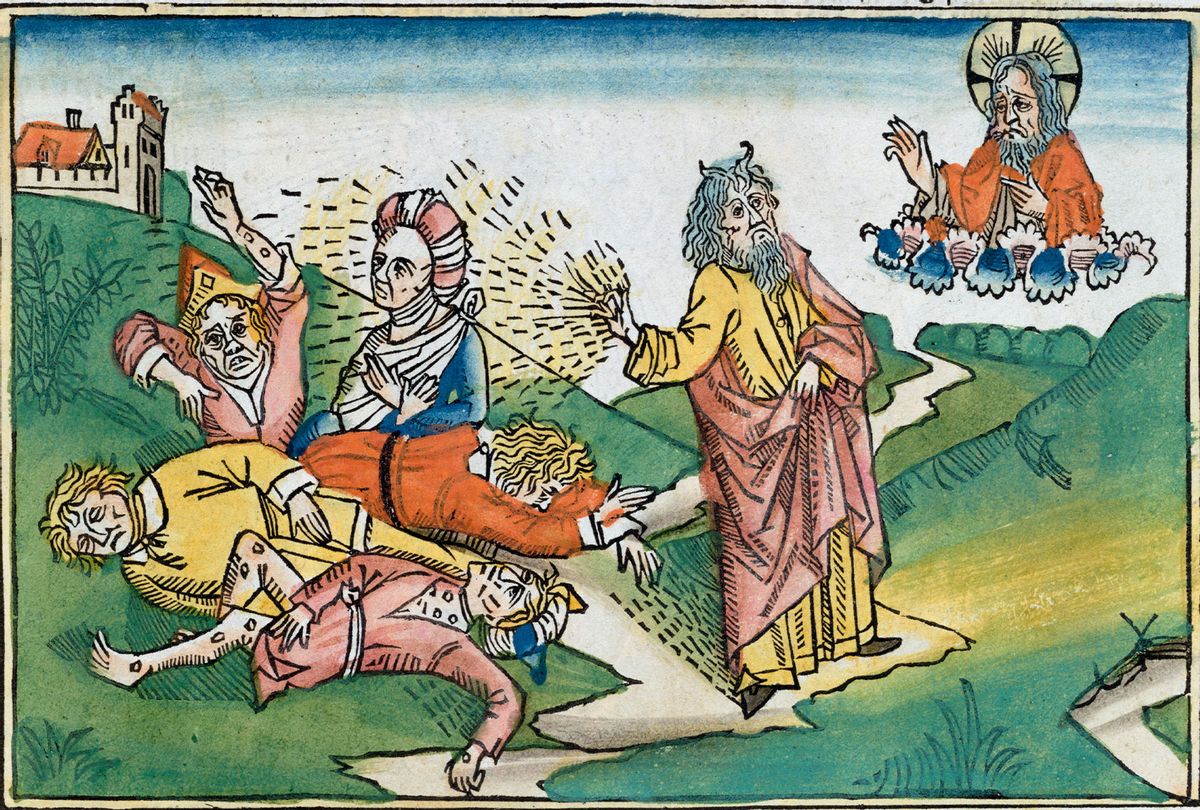 While the COVID-19 pandemic has been an inflection point of modern history, it is nowhere close to being the deadliest pandemic in human history. That dubious distinction belongs to the infamous "Black Death," a bubonic plague that swept through Europe and the Near East in the mid-14th century. Like COVID-19, the bubonic plague was a terrible way to die, but with very different symptoms. The most notorious were the dreaded buboes (hence 'bubonic plague'), severe inflammations of the lymph nodes that oozed pus and broke out over the groin, armpits and neck. A victim's skin and flesh would eventually turn black and rot, although long before this happened they would experience intense nausea, vomiting, fever, headaches and aching joints. Within days — or, at most, a couple weeks — the infected person would die.

One might imagine that a disease this terrible would have been burned into humanity's collective consciousness. Indeed, the Black Death did have a profound impact on our day-to-day lives, influencing everything from the professionalization of medicine and the decline of feudalism to works of art like Giovanni Boccaccio's book "The Decameron" and Ingmar Bergman's movie "The Seventh Seal." Yet the Black Death is not often mentioned in reference or in contrast to the COVID-19 pandemic — even though there are important parallels. Perhaps most tellingly, both diseases fueled scapegoating and mass hysteria because of widespread ignorance.

While the scientific illiteracy in the COVID-19 era is fueled by a mixture of motivated reasoning, political bias and historically-based concerns about institutional trustworthiness, inhabitants of the Middle Ages lacked modern humanity's sophisticated knowledge about biology. Louis Pasteur did not develop modern germ theory until the 19th century, half a millennium after the Black Death. Today we know that the Black Death was a disease, and that the microorganisms was most likely imported from Asia through the Crimea and into Europe and the Near East by way of fleas living on black rats. People who lived in Europe, North Africa and the Middle East in the 1340s and 1350s could not have even imagined what a microorganism was, much less the complex chain of events that would have brought such a deadly one into their homes.

In the absence of knowledge, some ugly alternative theories emerged. Because Jews had been a popular scapegoat in Europe for centuries, a wave of pogroms against Jewish communities broke out during this time as they were blamed for the plague. For years Jews had been collectively blamed for the death of Jesus Christ and accused of sinister blood rituals; around the Crusades, the stereotype also emerged of Jewish wealth, one reinforced in anti-Semitic minds by how Jews were barred from owning land and therefore were disproportionately concentrated in finance. Attacks on Jewish communities were commonplace prior to the Black Death, but now occurred with renewed vigor and effectiveness because the attackers had more motive. Jews were accused of poisoning wells and of other conspiratorial actions, all somehow connected back to alleged vendettas against Christianity, desires to earn money, ominous religious practices or some combination of the three. Victims were tortured into confession and exterminated in large numbers.

There is an obvious parallel between this and the rise of anti-Chinese prejudice during the COVID-19 pandemic. While nowhere near as pervasive as anti-Semitic sentiment during the Black Death, there have been thousands of anti-Asian hate incidents in the United States since COVID-19 reached our shores. These have ranged from taunts and slurs to acts of physical violence. And the rhetoric of certain politicians, who reinforce and encourage the scapegoating of China — or even promote unfounded conspiracy theories that China somehow created the virus — hasn't helped.

"I've been saying this for a year: The rhetoric from Trump has emboldened people to openly speak in an anti-Chinese way, which — being Asian American in the United States, part of the stigma is people can't tell Asians apart, we're forced into a racial group and lumped together," Rosalind Chou, an associate professor of sociology at Georgia State University, told Salon in April. "I'm Taiwanese American, but people walking down the street couldn't differentiate, right? [...] I've been saying for a year that people are going to get hurt if we keep placing blame and calling COVID-19 the 'China virus,' if we have radio talk show hosts and news reports constantly using rhetoric that is anti-Chinese."

Scapegoating during the plague era wasn't confined to Jews. Setting aside lepers and other unfortunate individuals from marginalized groups that were also sometimes blamed for the plague, medieval people had a wide range of theories about who was behind the Black Plague. Some turned to astrology for an explanation for the plague, as well as a possible cure. Many religious people believed it was God's wrath or Satan's scourge; flagellants, or religious penitents who would flog themselves in public and beseech the almighty for forgiveness, became a common sight at this time; more educated people subscribed to the idea that miasmas, or "poisoned air," was responsible for causing disease. (This was probably the closest anyone came to the truth without knowing anything about microbiology.)

There is a lesson in humility there: It is possible that there is much we don't know about COVID-19 in our era that could become common knowledge in a handful of generations. Likewise, there are parallels between the people who saw deities and devils behind every bubonic sore and blister, and those who insist that analogous sinister conspiracies are at work behind current events today. These ideas may seem outlandish, such as claiming that Bill Gates or George Soros is somehow behind the whole thing. On other occasions they have a measure of plausibility, albeit a grossly exaggerated one, such as the idea that the bug may have originated from a Chinese laboratory. Just as the flagellants and anti-Semites of medieval Europe drew from pre-existing religious traditions to color their interpretations of the Black Plague, so too do individuals who were conspiracy theory-minded before the pandemic turn to those types of explanations during it.

Not all of the comparisons between the Black Plague and COVID-19 are foreboding. As briefly mentioned earlier, the Black Plague drew attention to how medieval practitioners of medicine usually had no idea what they were doing. This planted seeds that eventually grew into a systematized, scientific approach to healing the human body — in short, the renaissance of modern medicine. While human beings were thankfully much farther progressed in biotechnology by the 2020s, the pandemic helped jump start the development of a new class of vaccine technology, the mRNA vaccines like those mass produced by Moderna and Pfizer/BioNTech, which could revolutionize medicine. Everything from cancer vaccines to universal influenza inoculations are all within the realm of possibility thanks to this platform, which trains cells how to produce proteins that the immune system can recognize as being associated with the SARS-CoV-2 virus.

By the time it had finished peaking (1347 to 1351) and ravaged most of the Western world, the Black Death had claimed anywhere from 75 million to 200 million lives. The COVID-19 pandemic's death toll, though no less tragic, is at the time of this writing just shy of 5.4 million, with more than 800,000 of those in the United States. Fortunately, this is a small faction of the total human population of more than 7.7 billion today; while it is impossible to know for sure how many people were alive in the mid-14th century, most estimates place it around 300 to 400 million. Reflecting back on how far humans have come, we can at least be grateful to live at a time when science has brought us so many miracles of medicine — even if it hasn't yet cured the miasma of misinformation.

Read more on the history of plagues and pandemics: