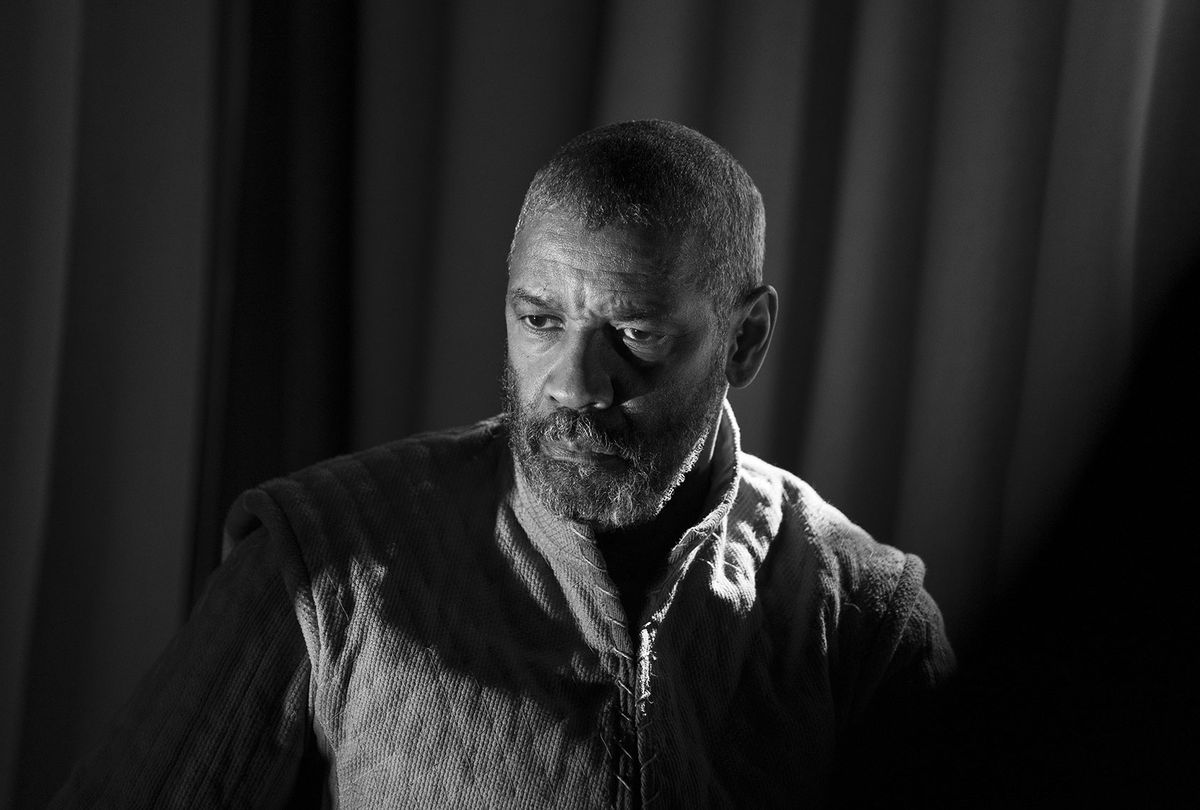 Denzel Washington in "The Tragedy of Macbeth" (Apple)
--

With its whispering witches, dense fog, and circling ravens, Joel Coen's "The Tragedy of Macbeth" has atmosphere aplenty. This moody film, which releases in theaters Christmas Day and on Apple TV+ January 14, is also heavy with shadows, endless stairways and hallways, and billowing curtains. Shot on a Los Angeles soundstage and lensed in luminous black and white, the film is suitably chilly and menacing. What's more, this screen adaptation of Shakespeare is impeccably acted by the entire ensemble cast, all of whom handle the iambic pentameter with noticeable aplomb.

The story is one of vaulting ambition as Macbeth (Denzel Washington) and Banquo (Bertie Carvel) are returning from battle having saved King Duncan of Scotland (Brendan Gleeson) by fending off his enemies. Along the way, they encounter three witches (Kathryn Hunter in multiple roles) who tell Macbeth that he will be king. But when he is promoted to Thane of Cawdor, and Malcolm (Harry Melling) is named next in line to the throne, Macbeth feels snubbed. A game of thrones begins when Macbeth plans to unseat the King and fulfill the witches' prophecy.

Macbeth's desire for power is, as anyone familiar with the play knows, more than shared by his wife, Lady Macbeth (Frances McDormand). She coaxes him to murder the King who will be staying with them that night. Macbeth is initially hesitant, but he "does the deed," and Coen films the killing impactfully, in a tight close-up with a spurt of blood.

Coen uses an economy of the storytelling, which is why the film is so potent. "Macbeth" is Shakespeare's shortest tragedy, and the filmmaker makes it a fleet experience that pulls viewers along as the drama increases and the body count piles up. Yes, there are soliloquies including "Unsex me here," and "Out, damned spot!" by Lady Macbeth, and "Sleep no more," by Macbeth, that are given room and time to breathe, but the film never becomes bloated or pretentious.

Once the King is dispatched, Macbeth tries to contain the situation, killing the two guards he has framed for the murder. The act gives him power, but it also causes him a crisis of conscience and he soon descends into madness. Macbeth, however, arranges for Banquo and his son Fleance (Lucas Barker) to be killed and orders the murder of Macduff's (Corey Hawkins) wife (Moses Ingram) and children, a sequence that is quite haunting.

"The Tragedy of Macbeth" impresses because the film is so visually striking. One shot of what looks like a moon in the night sky turns into a spotlight. An overhead view of a courtyard dissolves into a frame around a broken-down shack in the countryside. Macbeth sees a ghost in a pool of water that he holds in his hands; the apparition dissolves as he comes back to his senses. Coen employs various visual effects — from leaves bursting through a window to the ravens that overtake the screen at a key moment — to create a real impact which is why this production is so dazzling.

Moreover, the cinematography by Bruno Delbonnel, and the score by Carter Burwell, both frequent Coen Brothers collaborators, contribute to the film's power. The minimalist sets and chiaroscuro lighting highlight the themes and forces of good and evil. A fight scene set in a narrow passageway is especially intense and exciting. Oddly, while "The Tragedy of Macbeth" is stagey, that is never really a drawback. In fact, the sparse presentation — and the film is shot in a 1:33 aspect ratio to square the frame and tighten the imagery — is what makes it so urgent and compelling.

Washington, who last performed Shakespeare on screen in 1993's "Much Ado About Nothing," is superb in the title role, playing up Macbeth's fears while also making his madness credible. His speeches and body language are commanding as he internalizes all of his guilt and his tyranny surges. As the fiendish and cunning Lady Macbeth, Frances McDormand is revelatory. The actress rarely plays evil on screen, but she tackles this pivotal role with relish, emboldened by the power she desires.

In support, Kathryn Hunter is especially memorable in her shapeshifting performances as the witches as well as an old man who hides Fleance. (Hunter should play Gollum in the next "Lord of the Rings.") She is mesmerizing from her first scene, with her raspy voice and contorted body, but she is also captivating when she is seen doubly reflected in a body of water.

Although they have the least amount of screen time in the film, both Moses Ingram as Lady Macduff, and Stephen Root as a porter, are ingratiating because the actors bring verve and energy to their parts.

"The Tragedy of Macbeth" may not have the wit of a typical Coen Brothers film, but it is still quite wondrous.

"The Tragedy of Macbeth" opens in theaters on Dec. 25 and streams on Apple TV+ on Jan. 14. Watch a trailer for it below, via YouTube: