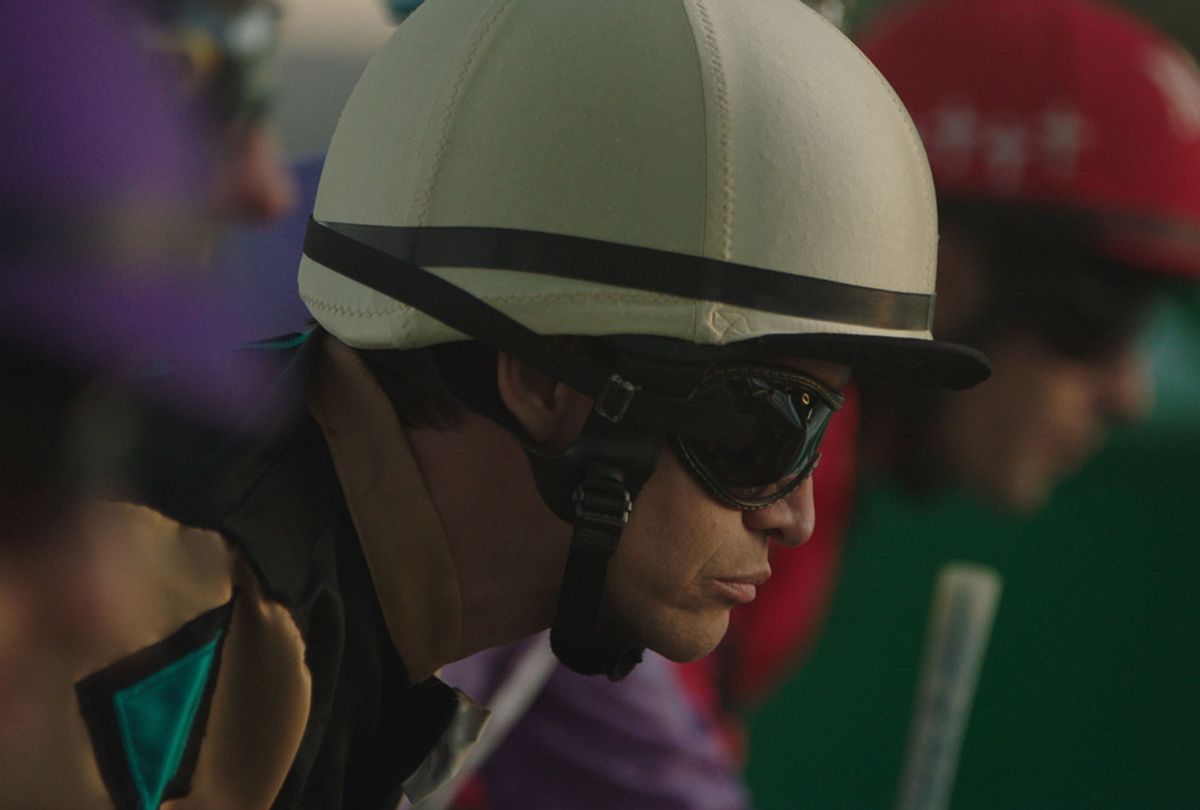 With his phenomenal performance as Jackson Silva in "Jockey," the reliable character actor Clifton Collins Jr. has been generating awards buzz ever since cowriter/director Clint Bentley's film premiered at Sundance back in January. And with good reason; Collins Jr., who won an acting prize for his role at the fest, has been long overdue for a part that showcases him so well.

In "Jockey," Jackson is in the homestretch of his career. He is fighting various health issues that he prefers to ignore, and he winces in pain — or simple exhaustion — as he pushes through and pushes himself to his limits. He hopes to lose some weight to ride Dido's Lament, a new horse his friend Ruth (Molly Parker), just purchased. While the chance to win excites Jackson, what "stops his heart" is an exchange he has with Gabriel (Moises Arias), a young up-and-coming jockey who claims to be Jackson's son.

Collins Jr. internalizes Jackson's emotions as he absorbs everything from a doctor's remarks about his health to his interactions with Gabriel or Ruth. Many of his scenes are shot in silhouette, but the actor conveys so much with his body language. During the racing scenes, Bentley closes in on Jackson's face, allowing viewers to see the race just from his expressions. (It's a clever approach). Collins Jr. is especially impressive in his last scene, a lengthy tracking shot that reveals so much sans dialogue.

RELATED: Take it from the youngest winner of the toughest horse race: "We all have a bold mode"

The actor is perfectly cast here, and if there was any justice this year, he would get an Oscar nomination, if not the award itself. Collins Jr. recently chatted with Salon about his work on "Jockey."

Jackson says he never felt worthy of riding a horse like Dido's Lament. He doesn't have the showiness that his friend Leo (Logan Cormier) has. Does he have an inferiority complex? What were your thoughts about Jackson?

It's like, "Careful what you wish for." You can be striving for this thing that seems unattainable, but you are constantly striving. You're riding that high and you have that community of riders and trainers, and horses, and your highs and lows. And you have some legendary stories. Jackson has these stories from his past that are sensational. In an earlier cut, there was a long tale of one of those stories. But there is that moment where he knows he is not being upfront with everybody. And that is a very common thing with a lot of the jockeys.

Same with actors. Actors who get sick will hide their ailments to knock off one more film. I get incredibly nervous when I have pickup shots and I'm flying because I don't want the plane to go down. If I have a good film in the can, I'm OK if the plane goes down. I feel bad for the other people, but I'm OK. [Laughs]

Jackson has these body things happening that he has not completely faced. It's like not paying your bills in the hope that they call you, and you tell them you didn't get it, until it really catches up to you. Until that horse [Dido's Lament] happens, he doesn't really want to be a burden to someone he cares about, like Ruth. Do I just let her go do this thing? We started this together, is she going to take offense if I [decline]? Or do I just go for mine, and do this with her? There are all these questions, and doubts. And it is hard not to doubt yourself when that big moment comes up.

As an actor, is there a parallel here for you, with this film being a big moment in your career? Is there pressure?

On the outside, yes, but not on the inside. On the inside, I'm just focused on being Jackson, and being true. I want to do something that the jockeys can be proud of. For them to say, "I can't believe they did that!" — that would be the greatest pain. Don't get me wrong, all the accolades are overwhelming. I didn't expect that. None of us expect that. What I did expect was for me to be able bring a truth to the characters and for the community that took us in to be proud. I've spoken to a few of those jockeys, and to hear them gush brings tears to your eyes. It shows you did the right things, made the right movies, created the details that touches their hearts. And they are the guys that you pulled from.

What did you know about the world of horseracing and jockeys prior to making this film? Do you regularly bet on horses or have you done any real riding?

I did quite a bit of riding on "Westworld." And I started gambling on the horses when I was probably 8 or 9 with my dad. He'd be drinking with friends while I would be gambling. That was my weekend. We'd go from his trailer to the liquor store, then walk over the Hollywood Park and meet his friends.

These horses are beautiful animals and Above the Law, who was Dido in the movie, there was something so special about her. I never had peppermints in my pocket. I never had candies. I wanted my relationship with the horses to be strangely organic and authentic like the performances. I never cheated that way. Above the Law just had this way about her. She wouldn't come to Clint [Bentley], but I'd say, "Hey, girl, you ready to come?" and she'd just look at me and come right over during the take. The moment with the wild mustangs — we didn't have a horse wrangler. I was walking back to base camp, and those horses happened to come up and crossed paths with me, and I felt safe. I looked over, and our DP, Adolpho [Veloso] was on his belly and catching the magic.

Your performance is so deep and invested, we can tell what Jackson is feeling without seeing his face, since he is often shot in silhouette. Can you talk about creating the character's body language?

That was really important, losing all that weight. I dropped to 143 in conjunction with my studying of my peers and friends, the jockeys. Even when we are hanging out, I am constantly studying them. Also, with the help of Clint, he guided me into being hyperconscious of how much Jackson is going through at what points in his life. We were meticulously tracking that. It is easy to blur the lines hanging with the jockeys and talking about getting injured. They have all been injured literally countless times. It was easy to have phantom pains. I'd feel those pains before going to set or shooting those scenes. Clint would tell me you're going through that at this point, so I would hide the pain a little more, but it is still in me because I've already planted those seeds. I've tricked myself into believing all that.

I felt that. Jackson has real health issues and the film emphasizes the toll a jockey's body can take over time. These things all imbue his character with a sense of fatalism. He is someone who is in worse shape than he thought but just wants to power through this.

It's painful. Very painful. [Laughs] Strangely rewarding, too. These jockeys are amazing athletes and amazing human beings. They have such resilience and consistently do what their passion drives them to do — they want to race any chance they get. So, knowing he is breaking down, Jackson's life is slowly crumbling before me.

What can you say about his relationship with Gabriel?

He has this strange chance mentoring this youngster. Mentorship is a beautiful thing, because long after you're gone, you have affected people around you who live and hopefully thrive. During the film, I cut off my ties with my friends in LA, with the exception of my two mentors and my grandmother, which spoke to Jackson's mentoring relationship with Gabriel.

Jackson is someone who tamps down his emotions. He goes from someone who lies to those who trust him — Ruth and Leo — because he doesn't want to hurt them. But he also inspires Gabriel, who tugs at his heart. Jackson has regrets, and expresses fear in a particularly vulnerable moment, but he may be most expressive in the best scene with that final tracking shot. How did you play that?

The last shot is his coming to terms with everything and accepting it. Whatever is to meet him the next day. This kid has been inspired by Jackson and something to be proud of. To have a moment not having to hide or lie anymore. Not have to deceive or give false hope and be completely 100 and whatever he did, and how he did it, is really irrelevant to the fact that he truly inspired people.

"Jockey" opens in theaters on Wednesday, Dec. 29. Watch a trailer for it below, via YouTube.