Salon's most popular science stories of 2021

From talking animals to churning ocean currents, here are the stories readers loved in 2021 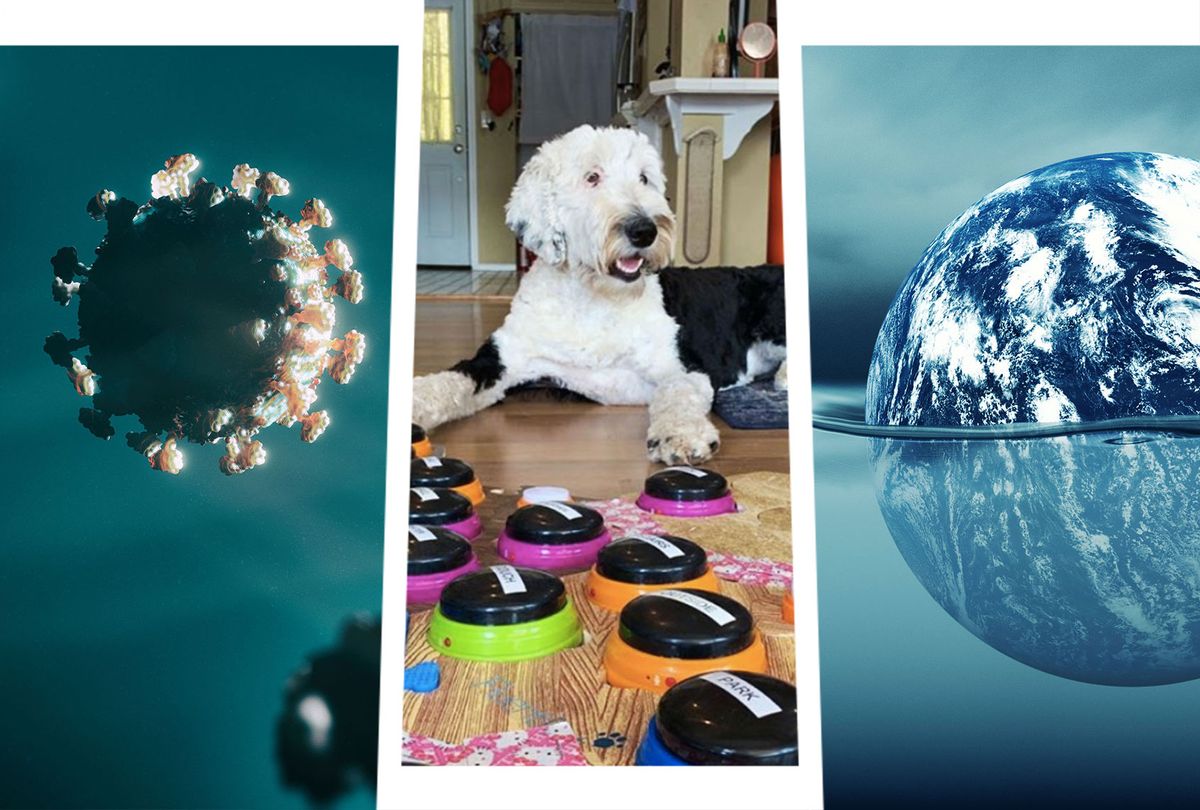 As 2021 comes to a close, it is difficult to say whether humanity has progressed much in the past twelve months. For all the medical advances in treating COVID-19, we were set back by misinformation and Big Pharma profiteering. Meanwhile, a summery ray of hope that the COVID-19 pandemic might soon be over was dashed by the delta variant, and later the omicron variant. Similarly, climate change panic set in this year for many: from disrupted ocean currents to overcooking cities, the global warming stories in 2021 have been universally alarming.

Yet it would be a mistake to remember 2021 just for the bad news, a fact affirmed by a glance at the most popular science stories Salon published this year. While our audience unsurprisingly wanted to stay up-to-date on the year's two most pressing science-related issues — COVID-19 and climate change — readers also embraced narratives that fulfilled curiosities and instilled us with hope. Scientists reassured us that, if an asteroid hits our planet, we will be ready; they tantalized us with the prospect that our pets might be able to talk to us; and they taught us what it is like to experience reality as a bird. Using cutting edge technology, scientists were able to draw more attention to how fish are mislabeled when sold to consumers. As we accumulate more knowledge about the human mind, psychologists have learned how to dole out the best advice to parents.

In 2021, Salon's science readers showed a craving for knowledge, some of it driven by the necessities of the news cycle and some of it by a simple love of learning. And since 2021 was a bit over the top compared to other years, we have decided to go a little over the top too and do the top eleven (rather than the top ten) science stories.

"NASA slightly improves the odds that asteroid Bennu hits Earth. Humanity will be ready regardless"

Bennu is one of the two most hazardous asteroids known in our solar system; with a diameter of roughly 500 meters, it would wipe out all human life on Earth if it ever collided with our planet. Given these statistics, it might seem like bad news to learn that in 2021 the odds of a future Earth-Bennu collision were deemed to be somewhat higher than previously thought. (1 out of 1,750 instead of 1 out of 2,700, to be exact.)

That said, the likelihood is still astronomically low (pun intended), and NASA scientists are more confident than ever in their technology. This includes machines that keep a watchful eye out for possible celestial menaces, as well as machines that they one day hope can be directed against dangerous asteroids so they can alter their orbit.

"The ocean is about to flip a switch that could permanently disrupt life on Earth: study"

Earth's oceans are tied to meteorology; indeed, there is one, specific massive system of ocean currents that literally controls the weather of the world. One current flows north with warm water that eventually cools and evaporates, causing the water in that region of the ocean to become saltier and heavier. As it sinks, that water forms a second current which flows to the south. Those two currents are connected to each other at various points in the Nordic Sea, Labrador Sea and Southern Ocean, and together they form the Atlantic Meridional Overturning Circulation (or AMOC for short).

According to an August report in the journal Nature Climate Change, global warming has led to "an almost complete loss of stability over the last century" in AMOC. If this series of conveyor belt-like currents shuts down, millions of Americans along the east coast will be flooded as sea levels rise; altered weather conditions will result in food shortages in South America, Western Africa and India; and Europe will be beset by plunging temperatures and massive storms. Right now, the data only points to a slowing of those currents, but as the study explains, "this decline may be associated with an almost complete loss of stability over the course of the last century, and the AMOC could be close to a critical transition to its weak circulation mode."

"Do dogs miss us when we are gone? A 'talking' dog offers insights"

Humans love dogs because they are a microcosm of what it means to be human — animals that co-evolved with us, and which have learned to adapt to and recognize human behaviors. Given their attunement to the human world, most dog owners have pondered at times what goes inside of Fido's head.

Thanks to a group of button-pushing pets, we appear to be edging close to an answer. One such study subject is a sheepadoodle named Bunny, who has learned how to touch buttons connected to words that, in the proper sequence, form rudimentary sentences. For example, when Bunny "commented" on the absence of her family's lost cat, she pressed the buttons to say, "cat" and then "bye." The sheepadoodle is one of almost 2,600 dogs and 300 cats enrolled in a project called TheyCanTalk. Its purpose is to give augmentative and alternative communication (AAC) devices to pets and see if they can use them to meaningfully communicate with human beings.

Want more health and science stories in your inbox in 2022? Subscribe to Salon's weekly newsletter The Vulgar Scientist.

Subway made headlines for all the wrong reasons in 2021: Over the summer, a New York Times investigation into the company's famous tuna fish sandwich could not find any "amplifiable tuna DNA." While the company insists that such tests are not reliable and that their sandwiches are indeed made from tuna, the story brought attention to the undeniably prevalent problem of fish fraud.

As of 2016, roughly one out of five samples of seafood was found to be mislabeled, as examined in a comprehensive study that included 55 countries, and there is no reason to believe things have gotten any better since. Very few businesses follow their responsibility to trace the origins of their fish, and much of our imported seafood was itself caught illegally. Even worse, many companies practice trans-shipment, wherein boats hand their catches to intermediate vessels so they can spend more time fishing. This creates an environment where mislabeling can ultimately happen.

"A 'talking' cat is giving scientists insight into how felines think"

Just as the TheyCanTalk study has allowed Bunny the sheepadoodle's owners to "talk" to her, Billi the cat has used AAC devices to communicate with his human companion. According to Kendra Baker, Billi's human parent, there are some notable ways in which the cat uses the buttons differently than the dog. Instead of stringing together longer sentences, Billi prefers to carefully choose her words, and will often hit only one button to make her point. In addition, Billi expressed a quick love for the button associated with the word "food"; if nothing else, Baker has learned that if this button is pressed, the humans know that it's chow time.

Striving for perfection in parenting is unrealistic and overly stressful, psychologist Dr. Juli Fraga and writer Gail Cornwall write in Salon. Rather than try to do the impossible, Fraga and Cornwall say that parents should be satisfied with "good enough" parenting — meaning what's left after ruling out anything that has been well-documented to cause kids significant harm. These include name-calling, using absolute language like "you always" and "you never," belittling language, intimidating one's child, swearing and withholding affection. One form of abuse that is not as widely known is gaslighting — that is, tricking someone into questioning their recollection of past events, usually with the purpose of escaping culpability for your own poor behavior.

Vinciane Despret, a Belgian philosopher of science and associate professor at the University of Liège, spoke with Salon this autumn on her new book "Living as a Bird." Despret's goal was to introduced us to the world as it perceived by our feathered friends. For one thing, birds do not view space through the dimensions of our horizontal world, but also with a vertical world that people only experience when they're in an aircraft. Despret also speculates that birds experience time very differently than humans.

"Sometimes they live in the pure present, but when they sing for example they have to negotiate and to manage the time because what is song? It's music," Despret told Salon. "And music is a question of managing time."

"Could a human actually be engulfed by a whale? A marine biologist weighs in"

"Neither of us want this!"

If whales could talk, those might have been the words that Cape Cod lobster diver Michael Packard heard from a nearby humpback as it spit him back into the ocean. Packard famously claimed to have been engulfed in the mammoth marine mammal's mouth for between 30 and 40 seconds before being unceremoniously hacked back into the briny sea. While some observers doubt Packard's story, it is actually plausible given whale anatomy: the cavity in a humpback's mouth is about the size of a small Volkswagen Bug. The throat and tongue would have been stretchy, but the "roof" would have been comprised of hard bone, while the sides were made of wire-like structures known as baleen plates. Salon spoke to a comparative anatomist, who explained exactly what the experience of being briefly engulfed by a humpback whale would be like, and why it isn't that far-fetched.

Back in August — months before the omicron variant reached the United States, but after delta had already emerged as the dominant strain in this country — scientists were fretting about the lambda variant. Although the lambda variant did not ultimately replace delta as the main COVID-19 threat, one of the warnings issued about lambda at the time proved prophetic. As Dr. Jonathan Zenilman, an infectious disease specialist and professor at Johns Hopkins University School of Medicine, wrote to Salon at the time, "The virus needs to develop ways to increase its transmissibility as there are less targets to infect." That is why, even as of August, "we have been seeing a progression of increasingly transmissible variants about every two to three months." While doctors still do not know how omicron emerged, Zenilman's observation may offer an important clue.

"Why Phoenix may be uninhabitable by the end of this century"

While the word "island" conjures up images of land surrounded by water, the "Heat Island Effect" is a climate change-fueled phenomenon caused by inadequate amounts of water. Because cities are heavy on asphalt and concrete, and light on the tree canopies that can offer shade and provide moisture, they become literal islands of heat. Like a worm baking on a sidewalk, densely populated cities like Phoenix are quickly losing the water and other resources necessary to maintain their survival. Without major infrastructure projects, climate change will render them uninhabitable in decades. Phoenix is more vulnerable than many other cities because it is located in the middle of a desert, but it will hardly be alone.

Most apple farmers avoid selling their fruit if it is afflicted by watercore — that is, a condition defined by dark spots on the outside and semi-translucent, syrupy streaks within. Traditionally, these types of apples have been deemed unfit for consumption and disregarded accordingly, but some customers find the taste to be enjoyable rather than repulsive, mainly because such apples are much sweeter than "normal" apples. And while few vendors sell them in the United States, a few enterprising farmers are starting to cater to those who understand and enjoy the taste of watercore apples.