Sects, lies and videotape: "Archive 81" and the mystique of the semipermanent artifact 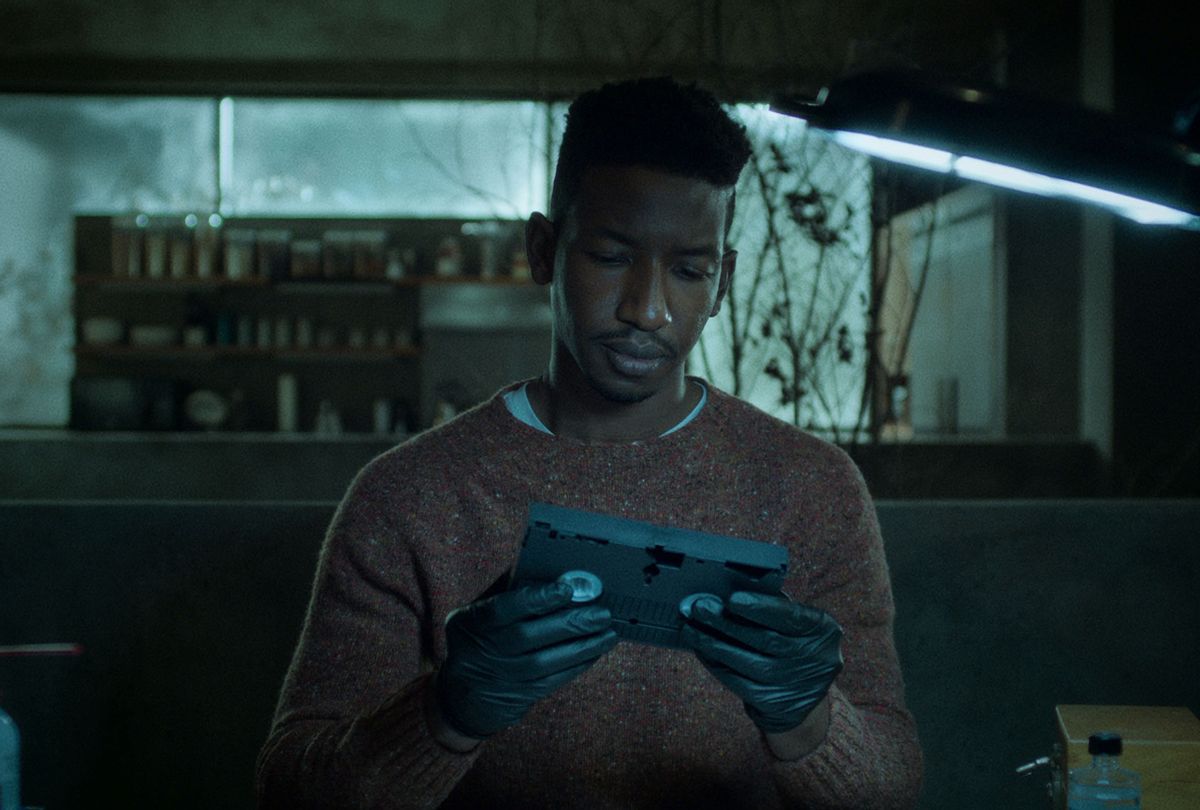 There's just something about a videotape.

In 1989, "Sex, Lies, and Videotape" billed itself as "the most provocative film of the year." I was surprised to discover upon first watch much later, it's not really about sex tapes, per se, at least not the Pamela Anderson and Tommy Lee variety. Rather, the story concerns a man who videotapes women talking about their sex lives, confessing secrets and fantasies on camera for him. "Why don't you let me tape you?" James Spader's character asks.

Video is alluring as a medium. And in Netflix's mystery series "Archive 81," it takes on a power as mysterious and majestic as Cthulhu. Video is ethereal, delicate, easily changed or ruined — the perfect house for our obsessions. And maybe for a demon too.

Related: We are all the "Fraggle Rock" Trash Heap now

"Archive 81" is about a young man (Mamoudou Athie in a memorable, empathetic performance) who works as a film restorer. He gets a mysterious job offer too good to refuse: $100,000 to restore videotapes from the personal collection of a generous donor to the film museum where he's employed. It's refreshing to see a character working on screen, doing a job that is precise and skilled. The scenes of Athie's character Dan methodically restoring are mesmerizing, like occupational ASMR: the white gloves, the cotton balls dipped in rubbing alcohol. He is delicate, almost reverent as he pulls tape from ruined casings, exacting and deliberate.

Because the medium is not. So many of the videotapes that pass through Dan's archivist hands look warped, disfigured by mold, heat, or just plain time. And for the job that Dan accepts? The tapes are too fragile to even be moved. He has to work on site, at the remote research facility of a mysterious company known as LMG.

The tapes in LMG's possession and now under Dan's care are Hi8 tapes, and immediately he gets drawn into their mystery. A woman named Melody Pendras (Dina Shihabi) made the tapes in 1994. She was a grad student, moving into an apartment building called the Visser, intending to interview residents there on video for her dissertation. But in 1994, the Visser burned down. After the blaze, 13 people were never found, including Melody.

"Archive 81" takes found footage to a different level, as the show soon slips into Melody's POV, and later, goes back even further in time. Videotape is the perfect medium for this slippage. It's already nostalgic for those of us who lived through the '90s. My sister, for example, had a big collection of videotapes on which she had recorded  episodes of "The Young Riders." I meanwhile dutifully recorded Tori Amos performances on late night talk shows. Did we re-watch these tapes? I feel like we didn't. But there was something about having them.

The Fisher Price PXL2000 toy camcorder makes an appearance in "Archive 81." Manufactured for less than a year in the 1980s, the toy has been used by filmmakers from Richard Linklater to Michael Almereyda in his 1994 vampire classic NADJA ("Archive 81" features NADJA actor Martin Donovan). It's legendary as a tool, that a cheap plaything for children could create such art. I gasped when I saw the camera onscreen as the memories of wanting it (and never getting one) came flooding back. "Archive 81" taps into that wistfulness and obsession.

The New York City of the first episode could be at any time. With a vendor (Malachi Nimmons Jr) hawking tapes on the street — "Cassette tapes! Come get your tapes!" — I assumed at first it was the '90s or earlier. But it's the present day, and the vendor lures Dan with a storage space auction find, peddling to the cult following of videotape.

That following makes sense given that "Archive 81" is based on a podcast by the same name which . . . had quite the cult following itself. And oh yes, this show is about a cult too.

Part of the mystique of videotape is the potential discovery of what it contains, "the hunt" as the vendor says. Videos can be taped over and over (I believe my sister and I had some drama involving her TV show and my Tori overlap). Memories can be erased in a heartbeat, or half-erased. Or disguised. One part of "Archive 81" involves the labeling, re-labeling and mislabeling of tapes.

You never know what exactly is on a videotape until you watch it, which is time-consuming. Fast-forwarding: awkward and imprecise. Rewinding: a rote task the video store would get mad about. Videotapes are also cumbersome. I remember teachers rolling the AV cart into classrooms during days we were lucky enough to watch a video; how heavy and annoying those carts were, full of VCRs and CRT screen TVs. Videotapes and their accoutrements take up a lot of space, even compared to CDs and their shattering plastic cases. It's a commitment to be devoted, as Dan is, to videotape.

And interviewing on videotape, as Melody does, is a calculated and laborious task. It takes a lot of effort carting a big video camera around, having the courage to whip it out. You can't hide it, like a phone. You couldn't record on video in the early '90s without being noticed, especially not with the head-sized camera of Melody Pendras.

Videotape is also delicate. Despite their large size and plastic casing, videotapes have only the illusion of permanence. They can be damaged easily, not only by something like a fire in the Visser apartments, but by absorbing moisture, by being placed near a magnet, by being left too long in a car.

Videotapes suffer from "generational loss." Every time you make a copy of a videotape, the quality is less. You're not getting an exact copy, as with a DVD, but one that is watery, filtered, as if through time. It makes sense that videotapes take on an extra power in "Archive 81" because they're such an elusive medium. One character mysteriously connected to Melody calls Dan's work "thin[ning] the veil enough to crack inside."

Older, damaged, or copied videotapes can pop, fuzz, hiss with static. Sometimes, that damage can take the form of art in itself. ("The Blair Witch Project" and HBO knows this well.) Wavy, staticky lines in an old video message from Dan's dad (Charlie Hudson III) look like the weave of canvas visible on a painting. Likewise, when an artist friend of Melody's, Annabelle (Julia Chan), who takes up residence at the Visser, begins to make new paintings, they resemble the paused frames of a videotape.

Every episode of "Archive 81" starts with vintage footage, a clip that serves as an introduction to the episode's theme or an Easter egg. The videotape is a conduit to another world — to the past, if nothing else. Dan's archivist predecessor used an older digital video camera to record the strange goings-on at the research facility, for example, not a phone. With so many characters steeped in archaic technology, of course time and reality would start to get a little wobbly in "Archive 81." What better way to step directly into the past — or, as in films like "The Ring," to have the past step out to you — than with a videotape?

"Archive 81" also raises the question — can we have a digital mystery? Though Dan's scenes are set in the present, the show quickly removes those technological advances that might, well, crack the case. There's no internet at the research facility. Cell phones don't work. The landline is tapped. It starts feel like a heavy artifice, as in "Harry Potter" where computers just don't operate on Hogwarts grounds: a convenient magic. "I'll be your Google," Dan's friend, a podcaster named Mark (the likable Matt McGorry), tells him.

Other mysteries like "Stanger Things" set their storylines entirely in the past to do away with pesky, mystery-solving technology like the internet and smart phones. (As in "Stranger Things," an alternate world in "Archive 81" is delineated visually with particles spinning slowly in the air — other worlds must be very dusty.)

But, despite its fickle tendency to get damaged, despite its changeable and cumbersome nature, videotape is also timeless, recognizable to my Gen Z son as an important object, if nothing else. An artifact that matters, whose presence lasts beyond its physical, plastic, erasable form.

And as the present and past of "Archive 81" blur together, the story takes on a "Somewhere in Time"-type urgency, and sets itself up well for a second season, similar to the series "Inkheart" by Cornelia Funke in another timeless medium: books.

In 1981, the Buggles sang "video killed the radio star" on the very first video to air on MTV, the music channel which makes an "Archive 81" appearance. I mean, it's possible.