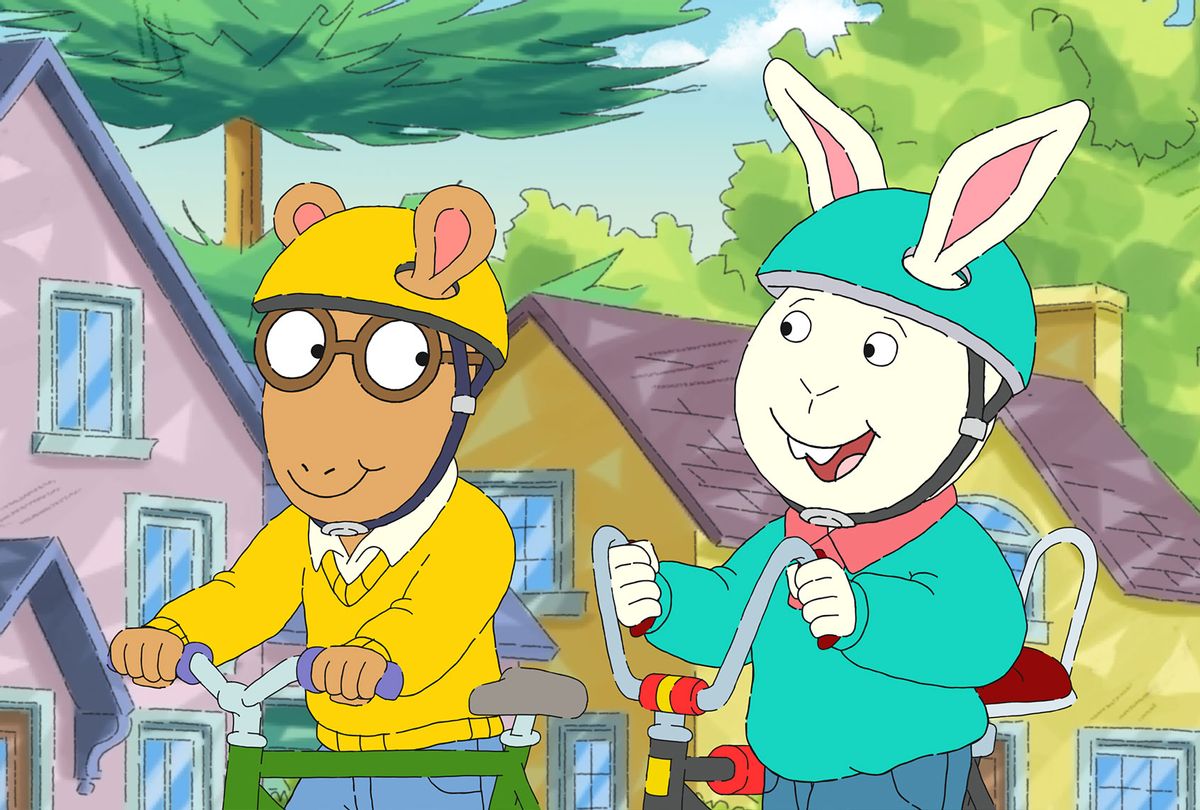 Arthur and Buster in "Blabbermouth" episode of "Arthur" (WGBH / PBS)
--

If you know a young millennial, chances are they've never once had a problem spelling the word "aardvark." They also will never forget that nine times nine is 81, and that having fun isn't hard if you've got a library card. They may not have watched the PBS cartoon "Arthur" – which airs its final episodes on Feb. 21 – in 20 years or more, but pieces of it are more than likely ingrained in their brains, alongside Eminem lyrics and the name Amelia Mignonette Thermopolis Renaldi.

And even if you don't know or understand the references above, you've definitely seen what has become the show's most defining image: a clenched fist next to a yellow sweater, usually used to communicate subtle anger.

What you may not know about that now famous meme is that in context, it's not actually about subtlety at all. It's actually Arthur, a young aardvark perpetually stuck in the third or fourth grade, revving up to punch his little sister D.W. in the face for breaking the toy plane that he explicitly told her not to touch. Arthur is not a role model of self-restraint, and D.W. is a character whose entire existence seems to be in pursuit of being punched in the face, yet you can't help but love them both.

This is not lost on creator and author Marc Brown, who appears to be exactly the gentle, soft-voiced man you might expect to be behind one of the most beloved kids shows – and whose delighted approval of your question might make you feel like you just got an A+ in your worst subject.

"You put your finger on what I think kids find most relatable about Arthur," he tells Salon on a Zoom call, regarding the punching. "He's not perfect. Yeah, he does fight with his sister. He does make mistakes. He's navigating the mud puddles of life, but he can't do it alone. He needs help from his friends. He needs help from his family to solve a lot of these problems, but kids see that he's got a good heart and that he's a good person and he's like them – he makes mistakes. We all do."

Arthur comes to an end this week after 25 seasons, and Brown has spent some time reflecting on the legacy his little aardvark is leaving behind, both in an effort to give the show a good sendoff, and to put together his newest book, "Believe in Yourself: What we Learned from Arthur." A flip through the book serves as a reminder of all the things the show managed to cover in its 25 seasons: divorce, cancer, autism, asthma, dementia, racism, bullying, censorship, failing grades, people lying on the internet, ripped pants, dueling birthday parties and "witches" who live up the street.

And then in season 22, everybody's favorite teacher Mr. Ratburn got married to his boyfriend and invited all his students – a nod to the time Brown's own third grade teacher invited all of her students to her wedding. ("Oh, what was she thinking?" he wonders of that decision.) And never forget that everyone in this world is an animal of some kind. Mr. Ratburn is a rat, and his husband is an aardvark, like Arthur. Arthur's best friend Buster is a rabbit. When civil rights icon John Lewis guest-starred to talk about racism and civil rights, he was a bear.

"I chose to write about animals for this age group 45 years ago, and the reason is that it levels the playing field," Brown explains. "Any kid who reads a story or watches the show can relate to any of the characters."

Arthur and his friends and family members are also based on real people Brown has known over the years, which he believes helps kids see them as real people, despite the fact that they might be a monkey.

Brown is thrilled that the kids raised on his characters and these important lessons grew up to celebrate them with memes – a great honor, on today's internet. He loves the fist jokes, and brought up additional memes of his own of two iconic D.W. images: one in which she's staring longingly through a fence, and another where she's standing in front of a sign meant to deter her saying, "That sign can't stop me because I can't read!"

He was particularly tickled to see Lebron James post an Arthur meme in 2017, and John Legend recreate the fist scene – complete with yellow sweater – in a Google ad after being trolled by his wife Chrissy Teigen over his resemblance to the character. Brown found it "amazing" that they had connected to the show in that way. He even sees Legend as the ultimate embodiment of Arthur in real life.

"Well, he is just an amazing man, and I'm in awe of his talent," Brown said. "I also love that he is a good citizen, and he cares about our country and he cares about what's going on and that people have a good life here. He doesn't get stuck in his celebrity. He's a real person, so he's pretty terrific."

RELATED: What's in a meme? A brief history of what Salon thinks memes are

All that said, Brown doesn't love all of the internet. "Arthur" premiered in 1996, when people were just beginning to get used to this new form of communication and the new world that was now open to them. The show has spanned a major technology boom, from waiting for dial-up to having access to almost anything or anyone you want in a thin piece of metal you can hold in one hand. The change has been both positive and negative. In 2005, a "Postcards from Buster" segment featured Buster meeting a kid with lesbian moms had sparked national outrage, but when Mr. Ratburn married his husband in 2019, Brown said 98% of the responses he saw were "glowingly positive."

"You would have thought that we blew up the world" with the two moms, he recalls. "So when we did Mr. Ratburn's wedding, I thought, how wonderful that we have made so much progress in this country." 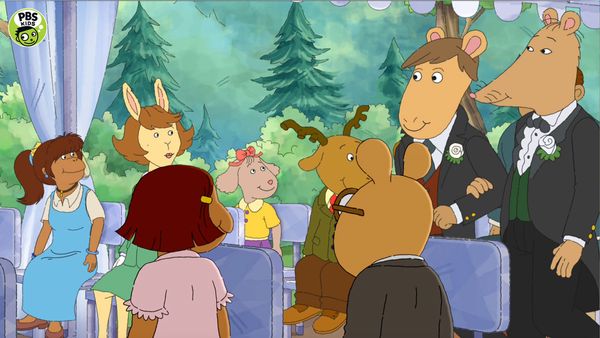 Normally, however, Brown advises creators not to read their reviews. "Just keep on working," he says. "Keep on looking for good things to play with and make stories about and keep your eyes open about what's happening in the world."

He says "Arthur" has always strived to tell kids the truth, and right now, the truth is that the way kids take in the world is changing. "Kids are taking in their stories on a phone! Twenty-five years ago, we never could have imagined that happening."

There are also more things for kids to watch than ever before, and that is concerning to a man who has dedicated his life to making that content.

"I can't control what other people are feeding children, but I know that I'm not happy about a lot of the things I see," he says. "But we're all in this big, glorious mess together, and all you can do is control your little part of the mess. I focus on what we can do, and I can't worry about everything that's being done wrong. But I do worry about problems, and I'm always thinking about things we need to talk with kids about, like school safety. I worry about social media, and the good and the bad that it brings into a child's life. So we have work to do."

As he continues to take that work on, Brown is reminded of an another TV legend.

"My friend Fred Rogers used to talk about the space between the television screen and the child and it being sacred, and how we had this responsibility to use it well. And I mean, God, talk about setting a high bar for the rest!"

RELATED: The enduring guidance of "Mister Rogers" on both children and adults

While some former fans of "Arthur" might be both surprised and a little saddened to know that it's ending, the good news is that in 2022, nothing really ends. Not only will episodes continue to run on PBS for "many years," but Brown explains that the show will be taking advantage of the "good fortune" of technology to find new ways of reaching kids in today's world. They'll be "experimenting with new media," which includes podcasts. Plus, you know, 25 seasons is a lot.

"Who even dreams of reaching that point?" Brown says. "We felt like we could take a chance to try something new."

Unfortunately or fortunately, depending on your perspective, Arthur's ending was planned long before they had to figure out how to address kids in the midst of a global pandemic. But while the future now feels fuzzier than it did a few years ago and the present feels even fuzzier than that, Brown is confident in the future that he and the writers have given Arthur and his friends in the series finale. 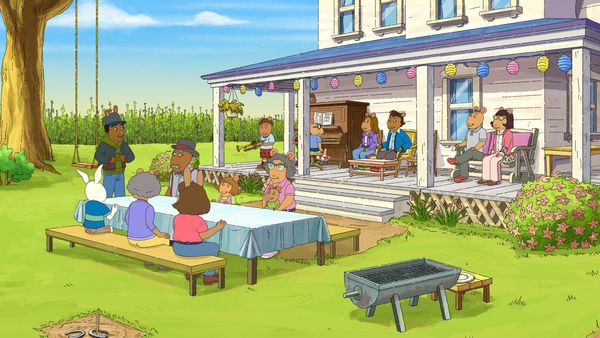 "The Rhythm and Roots of Arthur" ﻿episode of "Arthur" (WGBH/PBS

"I think we wanted to satisfy the most often-asked questions we get from kids. What happens to Arthur when he grows up? What do Arthur and his friends become?" Head writer Peter Hirsch is credited with writing the finale, and Brown is proud of the way he was able to take the different facets of everyone's personalities and fast forward them to adulthood to see what their "gifts" would do for them as adults. That future doesn't change with the hardships of the past two years.

"The future is always uncertain," he says. "And you can point to just about any place in time and there have always been obstacles that we have to overcome. So I believe in the power of kids, and what they can do. I don't think things are gonna get in their way. I think they're going to march forward. I'm encouraged by how positive the youth in our country is."

And if Brown's wrong, at least we'll always have the memes.

A special "Arthur" marathon is running on PBS Kids 24/7 and its YouTube Feb. 16-21. The final four episodes airs on Monday, Feb. 21 on local PBS stations and streams for free on PBS Kids.