The value of Pumpkin on "The Gilded Age," descended from a breed that's all about the good life

The long and royal history of the Cavalier King Charles Spaniel, more than just a beloved pet 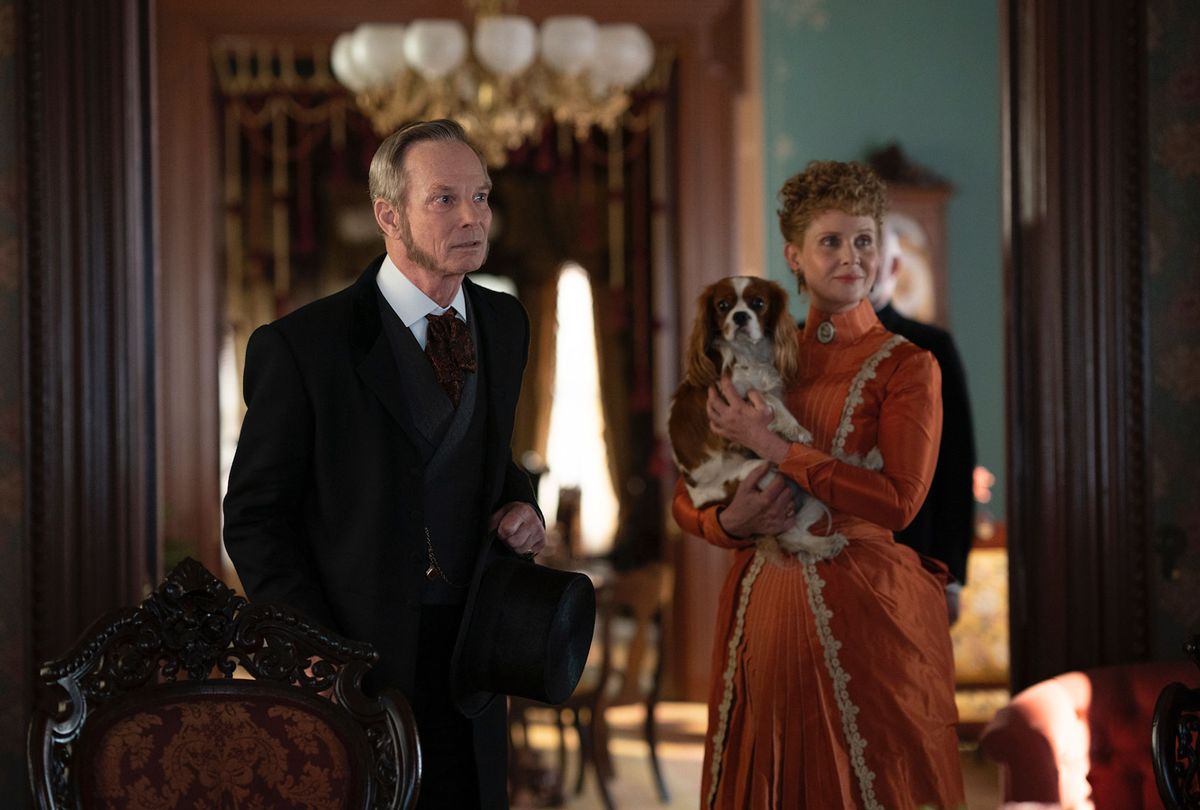 Among the big stars on Julian Fellowes' latest period drama "The Gilded Age," is a scene-stealer who fits right in with the best of New York's 1880s upper-crust society.

Pumpkin is the adorable, floppy-eared Blenheim Cavalier King Charles Spaniel, whose human is old-money socialite Ada Brook (Cynthia Nixon), sister of the wealthy Agnes Van Rhijn (Christine Baranski). Pumpkin trails behind Ada, has a place of honor on her lap and accompanies her on carriage rides. It's clear that Ada shares a special bond with her four-legged companion. Her sister, on the other hand, regards the dog as a nuisance or in her own words, a "horrid thing."

"Why do you bring that beastly dog?" Agnes asks with disdain during an outing. "Dogs are supposed to run alongside carriages, not travel in them."

The comment reflects a rather outdated sentiment that many people still hold about animals, viewing them as useful belongings rather than companions. In the 1930s-set series "All Creatures Great and Small," veterinarian Siegfried Farnon declares, "a dog should have a function" like hunting game or herding sheep. Even today, Pope Francis sees no point to pets, believing them to be distractions that "take away our humanity" by not allowing us to be parents to human babies.

But those men, like Agnes, are in denial. Just as the new-money Russell family across the street took over 19th-century New York, so have animals taken over as close companions, especially for those in urban areas.

Pumpkin represents a particular kind of companion animal however, one that carries with it a reflection of the values of its privileged owners.

The origins of the breed

Cavalier King Charles spaniels have a long history that's associated with royalty. The tiny pooches were revered by aristocratic families and showcased in many renowned court paintings.

Mary Queen of Scots first introduced the breed's French predecessor, the toy spaniel, to Scotland and England in the 1500s and owned a few pups herself. Her loyal spaniels dutifully stayed by her side, even during her public execution in 1587. Legend has it that one of the Queen's dogs slipped underneath her billowing skirt moments before she was beheaded. The small spaniel refused to leave her headless body and died just a few days later from what many believed was a broken heart.

RELATED: The changing face of "America's dog" — and what it says about us

The breed became popular during the late 17th century when King Charles II of England came into power. By then, the toy spaniels were successfully interbred with flat-nosed breeds and took on an appealing "flat skull" look. The pompous king, who was also a notable dog breeder, greatly adored the spaniels, allowing almost a dozen of them to lie in his bed and frolic around the royal quarters.

The Blenheim Cavalier King Charles Spaniel variety, which bears shades of chestnut and white fur like Pumpkin has, was named after Blenheim Palace, the grand estate of General John Churchill, first Duke of Marlborough. Blenheim Palace, which was oftentimes called the "English Versailles," was renamed after the Duke's glorious victory at the Battle of Blenheim. The General's steadfast dogs, which were primarily bred for hunting purposes, became symbols of nobility and embodiments of great courage and pride.

By the 19th century, the Cavalier King Charles Spaniel became an accessory pet amongst queens and princesses. They were, basically, the miniature chihuahuas in a handbag of their times and the epitome of high-class femininity.

Queen Victoria set the trend during her early adolescent years, when she became the proud owner of a Cavalier King Charles Spaniel named Dash. The tri-colored pooch lived a lavish life and was pampered with gingerbread biscuits, yacht excursions and landau rides. Dash was "the Queen's closest childhood companion," according to Her Highness' biographer Elizabeth Longford.

The film "Young Victoria" starring Emily Blunt and PBS' series "Victoria" starring Jenna Coleman also emphasized the role Dash played in the young monarch's life. After his death, a marble statue was erected in his honor, for which the Queen wrote an emphatic epitaph:

Here lies DASH, the favourite spaniel of Her Majesty Queen Victoria, in his 10th year. His attachment was without selfishness, His playfulness without malice, His fidelity without deceit. READER, if you would live beloved and die regretted, profit by the example of DASH.

As contemporaries, the Queen no doubt had an influence on dog owners like Ada, who regards the Cavalier King Charles as the ultimate refined lady's companion. Pumpkin's very presence inidicates Ada's upper class status in society.

Besides looking cute and pretty, Pumpkin fulfills many roles on "The Gilded Age" that essentially amount to him being a valuable status symbol. But he also serves to reflect the changing times.

Being a Cavalier King Charles owner means keeping an eye on your dog. The breed is known for not being "street smart" since they trust strangers and love to chase anything that moves, including vehicles. Indeed we see that early on in the series when the son of the nouveau riche Russells saves the life of Pumpkin, who is almost flattened by a carriage. That leads to a second meet-cute between the two houses divided by social status as the Van Rhijns' niece expresses gratitude for the rescue. 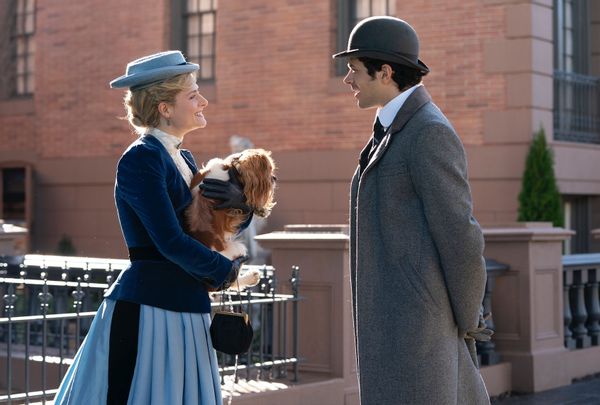 Louisa Jacobson, Pumpkin and Harry Richardson in "The Gilded Age" (Alison Cohen Rosa/HBO)This tendency to escape his handlers sets up yet another way to illustrate Pumpkin's literal monetary worth. In the fourth episode, "A Long Ladder," Pumpkin slips from his leash and collar during a stroll with the Van Rhijn's butler, Bannister (Simon Jones).

"But what if he's found by an unscrupulous thief?" a distraught and tearful Ada asks after hearing the news. "Someone might pay $50 for him."

"Only if they do not know the breed," her sister responds.

It's clear that a posh pooch like Pumpkin is out of reach for the impoverished and middle-class civilians of that day. But it's not just the cost that the family probably paid a breeder for him that makes Pumpkin a symbol for the rich.

Owning Pumpkin is a luxury in itself. His care and upkeep requires resources. The breed needs an easy life and regular brushing for its long, silky hair to prevent mats. Ada is an unmarried and middle-aged woman who comes from of inherited wealth. She has the time, the money and the necessary amenities (butlers, housekeepers and maids) to look after a dog like her own child.

Pumpkin's social value is not lost upon Bertha Russell (Carrie Coon), who finds the dog and decides to bathe and feed him before notifying the Van Rhijns of his presence across the street. While her husband's wallet has opened many doors in New York, she hasn't been able to infiltrate the snootiest (oldest) families in society. Pumpkin could just be her ticket to being accepted . . . but not if Agnes has anything to say about it. As soon as she reads the note, she sees through Bertha's ruse.

"If they found the dog, why not send a footman to return it?" Agnes points out. "No, if you asked me, they kidnapped it so that Mrs.Russell could deliver it in person. She wants to force us to receive her. I will not have that mutt turned into a link between these houses."

Bannister is sent to fetch the dog himself, putting an end to Bertha's social-climbing scheme – at least until the next time Pumpkin or another dog becomes a pawn between the two houses. After all, the Russells can certainly afford a fancy breed of their own.