Nuclear winter, crop failures and fallout: What nuclear war would do to civilization 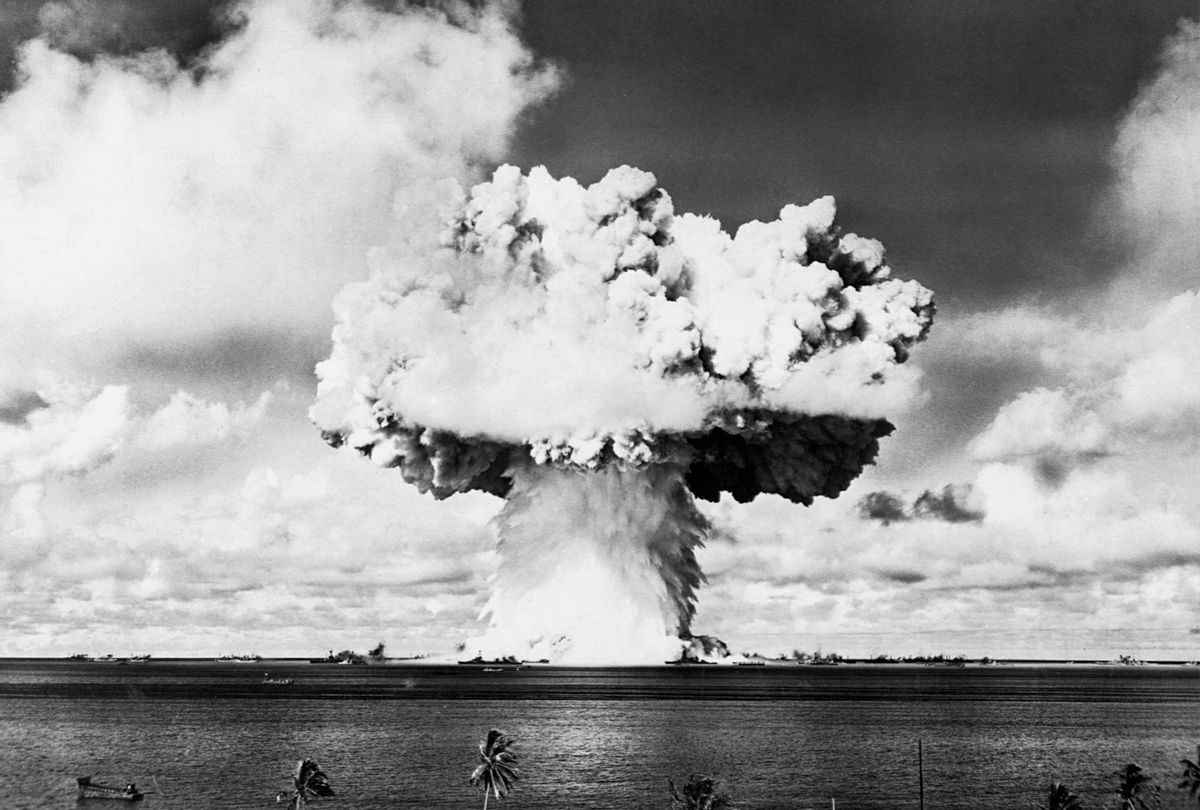 A column of water and a cloud of smoke from a nuclear bomb test conducted by the United States. (CORBIS/Corbis via Getty Images)
--

At the time this article is being written, Russian President Vladimir Putin is escalating his invasion of Ukraine with no end in sight. Because Russia has nuclear weapons, experts agree that it is possible they will be used during the war — perhaps on a smaller scale, perhaps on a larger one, say, with a NATO country like the United States. As Putin becomes increasingly desperate to recreate the Russian empire and destroy the liberal world order, there is no telling what he might do to save face and salvage what remains of his geopolitical ambitions.

If that happened, what would that mean for the rest of the world? The answer is both complicated (it depends to an extent on where you live) and terrifyingly simple — it would be an apocalyptic scenario right out of the most dire Biblical prophecy or dystopian science fiction story.

RELATED: The Ukraine catastrophe and how we got here

And the conflict doesn't need to culminate in a literal world war to have an effect on your life.

Even a comparatively smaller nuclear conflict, such as one that "merely" incinerates a few cities, would instantly plunge the world's economy into chaos. Globalization has resulted in a worldwide web of supply chains that are extremely vulnerable to disruption — this is already being seen with COVID-19 and climate change — and any goods that linked to supply chains in affected areas would grind to a halt. That, however, would be the least of humanity's problems. As smoke from the destroyed areas rises into the atmosphere, the entire planet will soon be choked to its breaking point under a blanket of soot. The Sun will not be able to reach vital crops, leading to dire food shortages, and survivors will be left inhabiting a state of constant winter.

For what it's worth, there are scientists who believe that a small scale nuclear war might not automatically result in a nuclear winter (although it would still be devastating). When it comes to predicting nuclear war, there are a number of variables to consider: The physical composition of the cities being attacked, which will impact what they put into the atmosphere after being destroyed; how many weapons will be used; what kinds of clouds will emerge; and so on. Even the scientists who are skeptics about what would happen during a smaller nuclear conflict readily state that a worldwide nuclear conflict would lead to winter. In the case of a smaller one, questions of scale come into play.

The wind also makes a big difference. In addition to destroying our climate, nuclear war will release radioactive materials as high as 50 miles into our atmosphere. While most of these particles fall to the ground around the area where the bombs detonated, the lighter ones will stay in the atmosphere indefinitely and become known as fallout. As they get carried all over the world by the wind and various other atmospheric variables, they cause diseases like radiation sickness and cancer to anyone exposed to them. This can continue for years as fallout circles the globe, only landing due to precipitation or just gradually settling on the ground. After that, however, they can continue to be dangerous; there are usually hundreds of different radionuclides in nuclear fallout, and some of the more lethal ones (like cesium-137) have long half-lives (in the case of that element, more than 30 years).

(For what it is worth, the likelihood is that things would not be quite as bleak in the Southern Hemisphere as in its northern counterpart. The reason for this is simple: Planetary wind patterns tend to not cross the equator, and as such scientists believe that most of the fallout from a nuclear conflict would stay in whichever hemisphere the bombs exploded in.)

A nuclear war would also exacerbate climate change. As the nuclear weapons rip into the atmosphere, they will destroy massive chunks of what is left of Earth's ozone layer. Organisms would suffer from the increased exposure to ultraviolet light, and the trends that already exist due to climate change — wildfires, hurricanes, loss of species diversity — will be accelerated.

These thoughts may not bother Putin, who has reportedly toyed with the idea of nuclear war and said it would end in Russians going "to heaven as martyrs," but it weigh heavily on much of the rest of the world. Occasionally there have been successful efforts to protect humanity from the threat of nuclear annihilation through political means. Perhaps the most important example was the campaign to ban above-ground testing of hydrogen bombs. When it was kicked off by Democratic presidential candidate Adlai Stevenson in 1956, he was widely derided as being soft on Russia (at that time the Soviet Union). Yet as he spread knowledge to the international public about how above-ground hydrogen bomb tests were putting fallout into the atmosphere, people realized he was correct. Within a few years, treaties were signed to make sure that nuclear tests could only be performed underground.

Given the threat of nuclear war today, it is easy to see why.

If you would like to learn more about nuclear weapons: