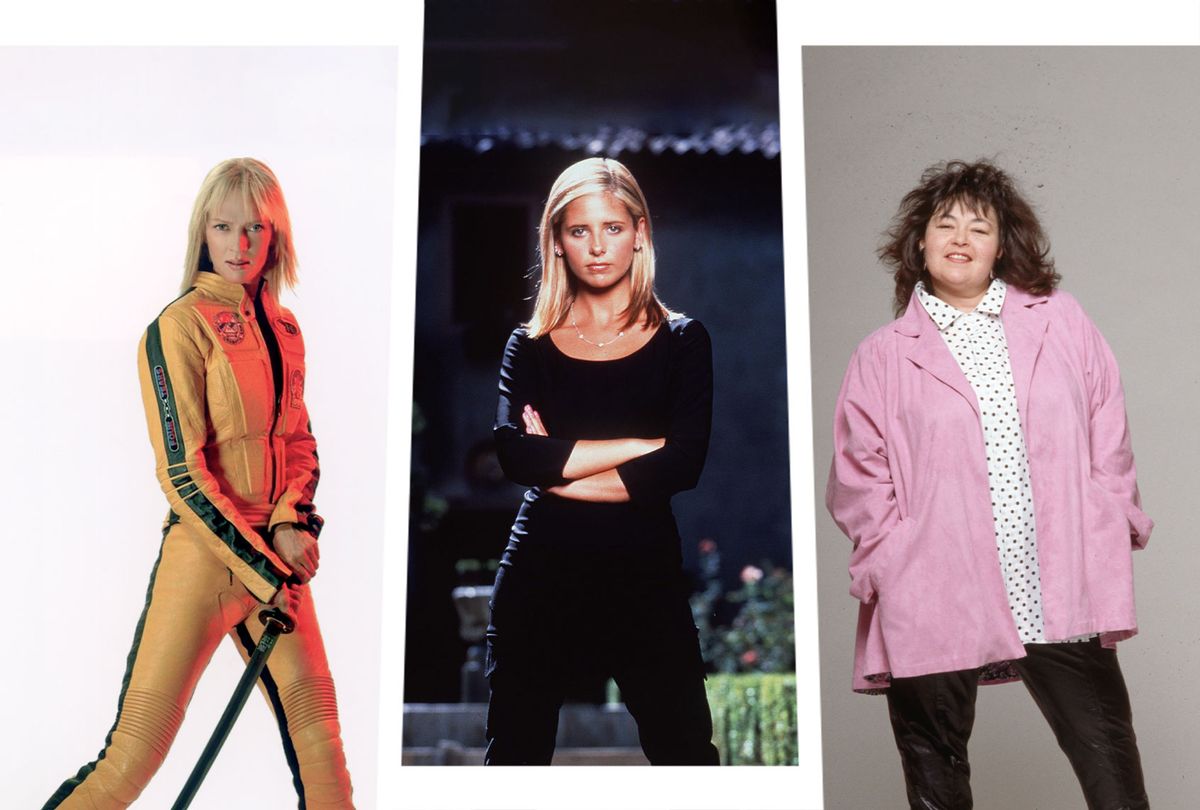 Thursday marked the silver anniversary of "Buffy the Vampire Slayer," and to mark the occasion I did absolutely nothing. To be honest, I hadn't even tracked the date — a common problem in a pandemic where time truly has become a flat circle. Nevertheless, once the hashtags and a few story links began floating around in my social stream, I realized I should have tossed together something for this fine publication.

That's what I did to mark the show's 20th anniversary five years ago, when "Buffy" still held a hollowed spot in my Comfort Viewing Hall of Fame. "Nearly 14 years have passed since the finale of "Buffy the Vampire Slayer" aired, and during that span of time I've watched that episode, 'Chosen,' at least once a season," I wrote back then.

But 2022's edition of me can't remember the last time I sought solace from that hour or any of the others that once served as spiritual jumper cables. Wait, maybe I can. Perhaps it was sometime before Joss Whedon's ex-wife Kai Cole blew his feminist reputation, accusing him of multiple infidelities in a guest column published in The Wrap later in 2017.

RELATED: Thanks for the honesty, Joss and Jeff!

It was definitely before he ruined 2017's "Justice League" or was called out by actors who worked with him on that film and "Buffy" and "Angel." By the time he hammered the nails into his own coffin in that famous 2022 Vulture interview, I long stopped thinking about "Buffy," although the best of what Buffy Summers represents still motivates me.

Hence, my arrival at what "Buffy" means 25 years later, having passed through the filters of the truth about its creator, #MeToo and squeamish second consideration of its casual sexism: It's a show that makes me miss the idea of it more than what it truly was.

A person can still adore what Buffy Summers stands for: agency, endurance, vulnerability, a determination to stand up again regardless of how frequently and forcefully life knocks her off her feet. She might also trust the memory of her adventures hold up better than many episodes do now.

The relative dearth of 25th anniversary think-pieces to this effect hints that maybe I'm not alone.

Granted, there could be a variety of reasons for this that have little to do with our moral compasses, recalibrated or otherwise. It could be a generational thing: the show connected strongly with Gen Xers and older Millennials, groups that are sliding into the "OK Boomer" category on advertisers' desired demographics lists.

It could be the fact that everyone who was once inspired by "Buffy" wrote all that needed to be written on the last major anniversary that had a zero in it.

Regardless of my dispiritedness toward a story I once adored, "Buffy" remains relevant enough to inspire listicles and quizzes, assuring its circulation in pop culture's bloodstream in some capacity for the foreseeable future.

But even if you choose to believe Whedon is penitent man willing to transform, the radioactive views of the man he was then is baked into every corner of the show. A few lone voices had questioned Whedon's feminism long before the specifics of his damaging, exploitative misconduct came to light. Directly afterward the first dam broke, Salon culture writer Alison Stine broke down all the ways that casual sexism permeates every "Buffy" episode Whedon writes, leaving little reason to re-litigate it here.

My larger point being, the show hasn't changed since 2017. But we have, because we know more about the circumstances that spiced this particular double meat patty.

This view of one muted anniversary response is another version of the hoary "separating the art from the artist" debate, which is simpler to do for some works. Others remind us in obvious ways of the artist's presence in his art, including in the ways he tells on himself and his behavior through his fictional alter-egos.

("The Cosby Show" is the prime example of this, as W. Kamau Bell brilliantly explains in his Showtime documentary series "We Need to Talk about Cosby." See also: the thematic refrain of casting older men with much young women that echoes throughout Woody Allen's filmography.)

Part of what we learned about Whedon, and from the man himself, confirms how much of the show was an extension of his id. Nice guys who identified with Xander, for example, may be aghast to realize just how closely the character was drawn to be Whedon's stand-in, coloring some of his already questionable behavior (which was never feminist to begin with) in a whole new palette of ick.

And "Buffy" at 25 is just one example of a property with which culture's relationship has changed over the last few years. 2023 marks the 20th anniversary of Quentin Tarantino's classic "Kill Bill: Vol. 1," which made Uma Thurman an action film icon. Thurman simply annihilated as the vendetta-driven, katana-wielding assassin The Bride, to the point that two decades after she first tore into theaters fans are still campaigning for her return in "Kill Bill: Vol. 3." (Tarantino says he wants to make it too.) Thurman is on the record as hesitant – understandable, since part of the original production's history includes some truly gut-wrenching pieces of trivia concerning how she was abused.

For instance, did you know that during a scene where The Bride is being strangled with a chain, Tarantino is actually strangling her? Thurman's reddening face, the straining capillaries in her eyes, all of it as real as the trauma that resulted from enduring it. Tarantino also spat in her face in another scene, each for the sake of artistic realism.

In her telling – or Maureen Dowd's writing in the 2018 New York Times piece where Thurman revealed these incidents – these paled in comparison to a driving stunt Tarantino talked her into, using a car that wasn't safe. She says the resulting accident left her with a permanently damaged neck and "screwed-up knees."

It's impossible to watch "Kill Bill" without being reminded that Thurman endured real pain to create the empowerment fantasy in which millions of people still take pleasure. How will that figure into that film's anniversary analyses? The answer is yet to be written; for now these are truths I can't unsee when I watch this movie two decades later.

"Kill Bill" and "Buffy" were, and are, culturally impactful to an extent that makes them worthy of memorializing, a status most long-canceled TV shows never attain. And frankly, there are other shows hitting anniversaries this year that are more notorious for their cast than their content. "Silver Spoons" turns 40 in September, a benchmark worth noting only if you remember that "Silver Spoons" was a popular if middling early '80s sitcom.

It's more likely that you remember that it starred Ricky Schroeder, who grew up to become a hyper-conservative wingnut. Schroeder's recent claims to fame include helping bail out Kyle Rittenhouse — a teenager who shot three people, killing two of them, at an August 2020 Black Lives Matter protest in that took place in Kenosha, Wisconsin. Also, in 2021, Schroeder posted a video that shows him proudly harassing a Costco employee for making him adhere to California's indoor mask mandate.

"Growing Pains" ended 30 years ago this April, and maybe that will remind us of how much we miss Alan Thicke. On the other hand, the ABC sitcom unleashed Kirk Cameron too.

Then there are shows like "Roseanne," which America missed and wanted to remember, as the success of its recent revival proved. But then its star Roseanne Barr reminded us why folks spent so many of the years between the old show and the new trying to forget her by doing a racism simply because she could not help herself.

That show marks the 25th anniversary of its first series finale this May and the 35th anniversary of its premiere next year. That, I believe, will be an anniversary worth dissecting, because the rest of the cast figured out a way to continue telling its family's worthwhile story through "The Conners" — and without its problematic title character or the awful woman playing her.

Few TV series, movies, pieces of music or other works come into being without some measure of difficulty and moral imperfection, whether on the part of their maker or in their execution. Remember that as we approach the 25th anniversary of the publication of "Harry Potter and the Sorcerer's Stone," the book that transformed modern fantasy writing and introduced the world to J.K. Rowling.

Back then, we hadn't a clue that one day she would become our reality's version of Voldemort by revealing herself as one of Earth's most famous transphobes.  Now, the stars of the "Harry Potter" franchise are doing what they can to counter that bigotry with their own inclusive messages about the stories and what their characters stand for.

Lots of people still unapologetically love "Buffy," "Harry Potter" and other work whose consumption comes with a bitter aftertaste. All of us make a few internal compromises when it comes to entertainment and entertainers we adore. If we can be honest about the product, and if the product itself retains a level honesty which we can reconcile ourselves despite what we know about its manufacture, then perhaps that leaves us with a means of celebrating their various anniversaries.

Before we knew what we know now, there was a time when these tales brought us joy. For many of us, they still do. And that is a commodity not to be devalued when the entire world feels like a hellmouth.