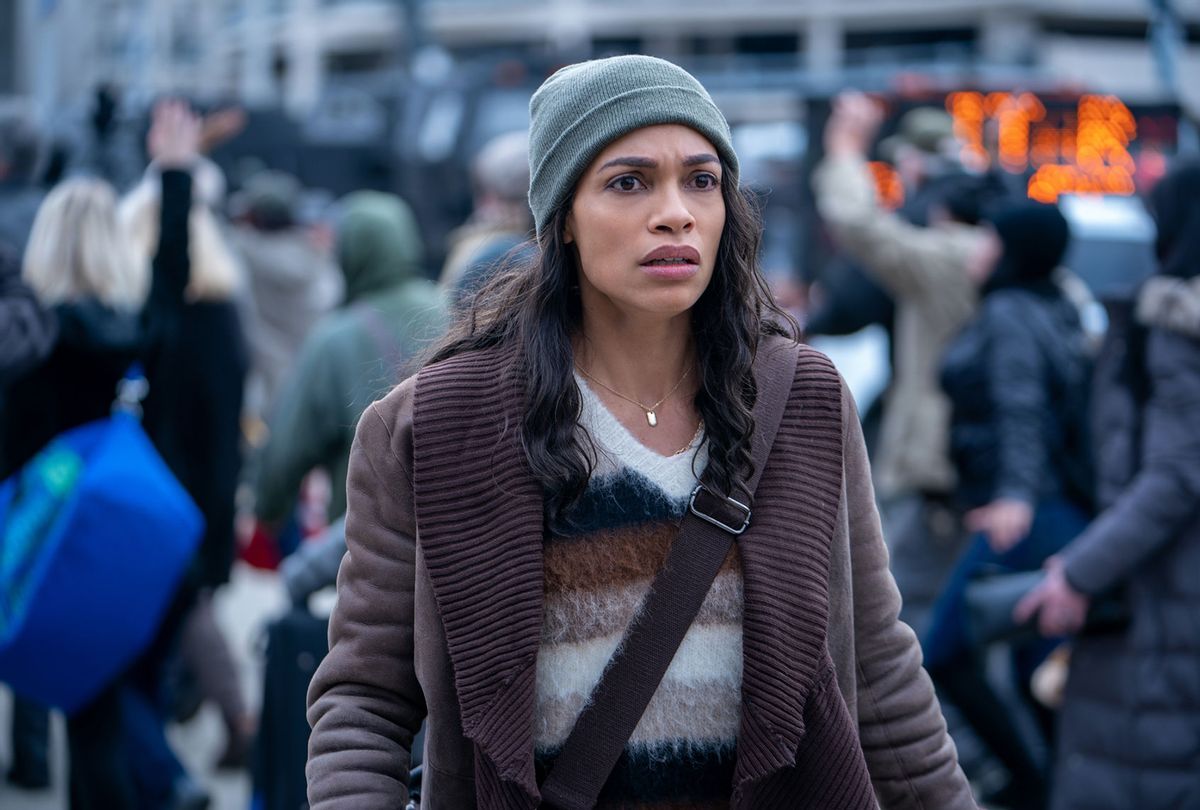 HBO Max's "DMZ" holds you in a state of wanting more. In this era of episodic cliffhangers designed to feed binge frenzies, that may read like an endorsement. Not quite.

Neither is it an outright dismissal, or else a person wouldn't be frustrated enough to think about what could have been. What we have in this limited series is the making of what could be a thoughtful fable about the toll of long-term conflict on those lacking the means to flee or who simple refuse to be driven out.

The story itself – of a self-governed, demilitarized section of Manhattan cordoned off and abandoned in the midst of America's Second Civil War – has an obvious relevance right now, when much of the global stability we once took for granted feels like it could disintegrate in a flash. The title is designed to stir visions of such no-man's-lands, imagined or actual. Its premise, of an America torn apart by rebellious militias originating from Midwestern states, hits a little closer to home these days.

RELATED: In the coming second American Civil War, which side are you on?

In this reality and the tale's speculative version, the corruption of patriarchal governance is inevitable, part of a ceaseless cycle of lording over others by seizing control of wealth.

Still, it's tough to determine whether inadequate time or time management is the problem. What is certain and obvious is how hurried everything plays out, with characters leaping great chasms where remedial blocks of relationship development should be. When the main hero vaults from an outsider nobody knows to a messianic hope within two episodes for no reason that feels natural or makes sense, believing pretty much everything that occurs afterward becomes impossible. The exception would be if the circumstances are too raucous or explosive to be discounted. "DMZ" favors drama and solemnity.

At least that part works. Patino enacts a few intelligent shifts away from Wood's original story, such as making the protagonist a woman and a medic named Alma instead of yet another heroic male journalist. As Alma, Rosario Dawson channels a granite determination into her character's anguished search for her boy.

Nearly a decade before the events of "DMZ," New York City came under attack after the secessionist Free States army turned against the U.S. government. The show itself doesn't clearly establish this, by the way, which is its first mistake, and an especially glaring one, as if to trust that the reasons for this dystopia coming into being matter less than the hell itself.

The flipside is that the DMZ's reputation in what remains of the United States, a crumb of which is presented as a dimly lit, gray scale industrial wasteland, is in many ways worse than its reality. And this is a surprise for Alma, who lost her teenage son Christian during the attack and ended up in the U.S. without him.

Eight years later, she's determined to return to the reputed netherworld of the DMZ to find him – and her first clue that her U.S. saviors may not have been entirely honest about this place harboring "people at their worst" is the blaring, jubilant walls covered in art and what looks like a block party with people dancing and sharing food.

Dawson excels at physically demanding action roles, and that part of her repertoire comes into play here despite the series preferring to evoke its danger through tension and measured bursts of violence. 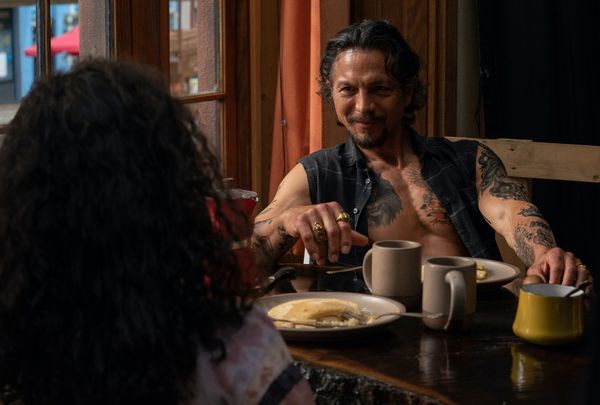 Together they conscientiously render the DMZ as a place where its denizens prioritize vibrant creativity as part of their survival, even in its most dangerous colors. The sheer exuberance of the wild, overgrown landscape, the flamboyant reds and pops of blue speak of motley ingenuity, warmth and community in a time of scarcity.

This is in keeping with each filmmaker's best past stories, particularly DuVernay's "When They See Us" (where she previously worked with Miyares), where they present a view from inside communities that most white people fear to enter but are quick to disparage. Alma's first discovery about this supposed death pit is that folks still take care of each other.

Yet the danger is real. The New York that the rest of the fractured country left behind is less of a democracy than a territory divided into tribalist fiefdoms run by an assortment of trigger-happy warlords and predatory killers like Skel (Miyares)  with two men, Parco (Bratt) and Wilson (Lee), vying for the position of governor. Alma happens to have a personal connection with each that she leverages in the hope of locating her son. But her eight-year absence makes her a stranger to them and everybody else – even family.

People who know and love their post-apocalyptic B-movies will recognize shades of "Escape from New York" and "The Warriors" playing out in "DMZ."  That isn't necessarily to its detriment, save for the complete absence of camp.  But the story also resists the urge to portray this place as a meat grinder. That makes it fairly watchable despite the clunky execution of the second, third and fourth episodes.

But in the same way "Station Eleven" makes a case for our innate need to sustain joy at the worst of times, the parts of "DMZ" that work best are the moments when secondary characters such as Jordan Preston Carter's streetwise scavenger Odi extend kindness to those less fortunate than they are. This is one part of the series' broader exploration of marginalized people making a kingdom out of leftovers.

Patino has a good time playing with tropes, including Wilson's tactic of surrounding himself with female bodyguards like some boss out of a '90s Hong Kong action flick. It's a goofy move that plays into a popular stereotype, which Wilson acknowledges in a way that only Lee could pull off. 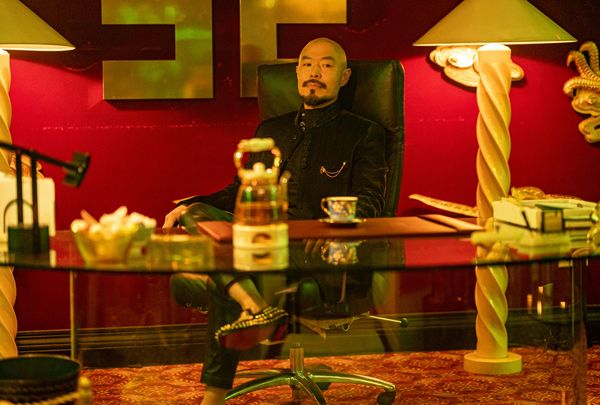 Hoon Lee in "DMZ" (Eli Joshua Adé/HBO MAX)"DMZ" presents yet another opportunity to appreciate how versatile and underutilized of an actor he is, especially when he goes toe-to-toe with Bratt's gold-and-leather dripped kingpin. As Parco, Bratt employs the charisma he wields as a protagonist the way an assassin might secret a blade in a shirt sleeve. His malevolence is plain, but Bratt makes it easy to understand why Parco's constituents are drawn to him. As ably as he does this, Lee makes his adversary even more deceptively reasonable.

All of these are virtues that turn into problems once it becomes apparent that Patino doesn't have the room to thoughtfully add humanizing dimensions these characters or write fortifying layers into their relationships with each other. The actors stretch mightily in their performances to sell the many plot holes that "DMZ" requires us to ignore as we travel with Alma. Other details, including a ticking-down clock in the first episode, have no real purpose at all.

Whether the poignant performances and rousing visuals are enough to carry viewers through its inconsistent flow is as tough to say. Similarly, who knows if Patino would have satisfactorily filled in the gaps displaying his plot incompleteness with extra hours? What we can see is that "DMZ" gives incredible performances while asking us to ignore some massive flaws, trusting that an outstanding cast and timely premise are enough to compensate for the messy, pothole-ridden landscape it asks us to travel with Alma.

All episodes of "DMZ" are currently streaming on HBO Max. Watch a trailer for it below, via YouTube.