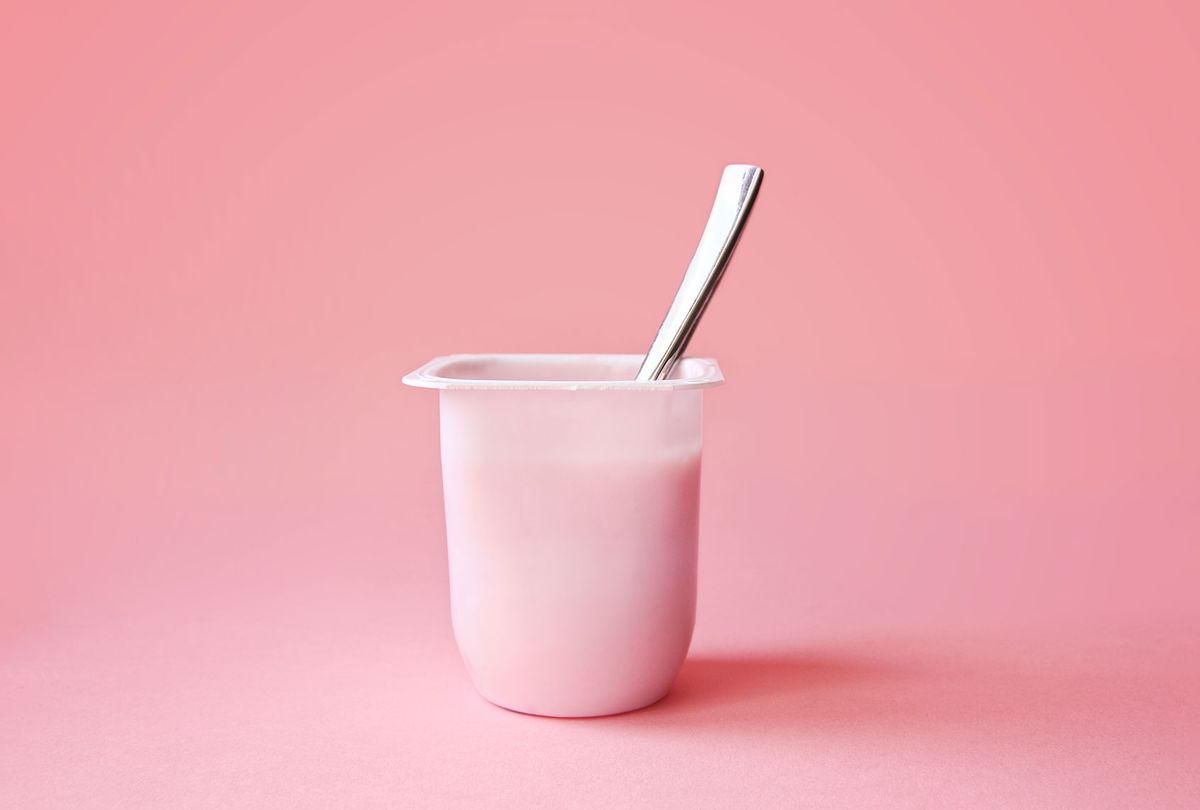 Earlier this week, I clicked play on a new series called "Welcome to Flatch," a mockumentary-style sitcom — based on the BBC series "This Country" — about the eccentric inhabitants of a small Midwestern town. The show is fine (the British version is better), but one line in particular really stuck with me.

Seann William Scott plays Father Scott, a minister who did a short stint in his youth as a member of A-Men, a Christian boy band which was "very popular in Germany." Eventually, Father Scott decided to go solo in hopes of — as he put it — being bigger than Cosmopolitan yogurt.

I slammed the "pause" button and immediately fell down a food history rabbit hole. "I now can't stop thinking about Cosmo's early aughts, ill-fated foray into yogurt," I texted my partner. He simply responded with a question mark. Let me explain.

RELATED: From Guy Fieri to yogurt cups with abs, how "dude food" is presented and affects what we eat

In 1999, Cosmopolitan — which was known for appealing to the "fun, fearless, female," as storied editor Helen Gurley Brown would have put it — was at a turning point. A new millennium was fast approaching, and after serving as editor in chief for almost four decades, Brown had recently been gently let go from her post. The magazine's publisher felt as though she had potentially fallen out of touch with what young women wanted.

What did the new guard at Cosmopolitan think women wanted? Yogurt, apparently.

That year, the magazine partnered with MD Foods to launch a line of low-fat yogurt, as well as a low-fat soft cheese. According to Marketing Week, "the products were intended to extend the Cosmopolitan brand into the health food sector" (which is probably more accurately described as the "diet food" sector, in this case).

Dieting had long been a through line of the Cosmo ethos, pioneered by Brown herself. As she once wrote:

If my weight's okay, dinner for me might be muesli with chopped prunes, dried apricot, six unsalted almonds, dusting of Equal, and a cup of whole milk. Delicious! If weight-fighting, it's back to tuna salad with one slice seven-grain toast and half a tablespoon of diet margarine. Dessert every night is that whole package of sugar-free diet Jell-O in one dish just for me—one envelope couldn't possibly serve four as directions suggest—with a dollop of peach, lemon, strawberry or whatever Dannon light yogurt on top. Fifty cals—heaven!—I'm Wild Again

Now, it's not inconceivable for a brand unknown for its culinary endeavors to take a foray into the food industry. Patagonia, for instance, launched "Patagonia Provisions," a line of sustainable pantry items.

"What's an outdoor clothing company doing selling food?" wrote Patagonia founder Yvon Chouinard in a 2020 blog post. "A similar question was asked of me in 1968, when we were blacksmithing new tools for mountain climbing, and suddenly started selling shorts, shirts and pants. Skepticism seems to rise whenever a company refuses to 'stay in its lane,' but as an entrepreneur, I see business opportunities everywhere."

For Patagonia, the venture appears to be paying off; it's not unthinkable that you'd want to load your Patagonia backpack with Patagonia smoked venison links and cacao-goji power snacks for your next hike. In the case of Cosmopolitan, the leap was a little harder to make: You read our magazine about staying thin, so maybe you'd like to eat our low-fat yogurt, too?

That didn't impede Cosmopolitan from attempting to inspire that leap, however.

It's worth noting that in this era, Cosmopolitan was trying to lay the groundwork for a major expansion. As Campaign, a trade publication centered on marketing and advertising, reported in 2001, "women's glossy Cosmopolitan is to launch a series of branded 'lifestyle centres' that will offer advice on exercise, nutrition and emotional problems to young women." A year prior, Cosmopolitan had unveiled plans for a chain of "branded" cafés.

These ventures had trouble getting off the ground — just as the yogurt had trouble moving off of shelves. Despite being billed as "sophisticated" (which also meant that it ran more expensive than competitors), grocery shoppers didn't seem interested in the branded product.

To this day, a Google search of the phrase "Cosmopolitan yogurt" will — after you've scanned through a page or two of cocktail-inspired treats — turn up a bunch of business school presentations about the importance of understanding one's target audience through extensive market research.

With the rabbit hole fully explored, I was able to return to my show with a better appreciation of whomever on the "Welcome to Flatch" writing team had tucked that gem of a line into the script.

This essay originally appeared in Salon Food's weekly newsletter, The Bite. Subscribe here to receive early and exclusive recipes, how-to's and quirky food history deep dives like this one.

Interested in reading more stories from the Salon Food archives that touch on diet culture, gender and weird corporate forays into the food industry? Check out this list:

Women had Cosmopolitan yogurt, men had yogurt that *checks notes* was served in plastic tubs etched with six-pack abs. This is only one of the almost comical examples of the confluence of food and gender found in researcher and writer Dr. Emily Contois' book, "Diners, Dudes and Diets." In my interview with Contois, we specifically talked about yogurt.

"If you're getting a yogurt marketed for women, it just collapses in your hand," she said. "But then, I wrote about the Dannon Oikos Triple Zero one. It's such a heavier weight. Then there was Powerful Yogurt that had six-pack abs literally chiseled on every cup."

She continued, "So, it starts there, but you also see it in flavor names. They're often more simple and direct when intended for a male audience. For women, they're often standing in for desert, right? It's key lime pie, instead of just key lime. For men, it's a post-workout snack they recodified."

2 A Mother, a Daughter and a Pot of Cabbage Soup

"I don't remember the first time we tried the diet together, but I was probably 15 or 16," wrote Salon's Mary Elizabeth Williams. "I remember the piece of paper clearly though; a photocopy so many generations away from its original the letters were fat and fuzzy. My mother was probably at the beginning of everything then, all the problems I still don't understand. It was getting harder for her to maintain the whippet physique that had become part and parcel of her identity."

It's a tough, touching essay about mothers and daughters and the things we share — neuroses, experiences, or in this case, a disgusting cabbage soup diet.

In terms of brands branching out, I've been keeping a close eye on the trend of fast-food giants and other top food companies dipping their toes into the world of what I've heard referred to as "stunt spirits." Arby's had Curly Fry Vodka, Taco Bell released a wine . . . and now Old Bay is getting into the vodka game, as well.