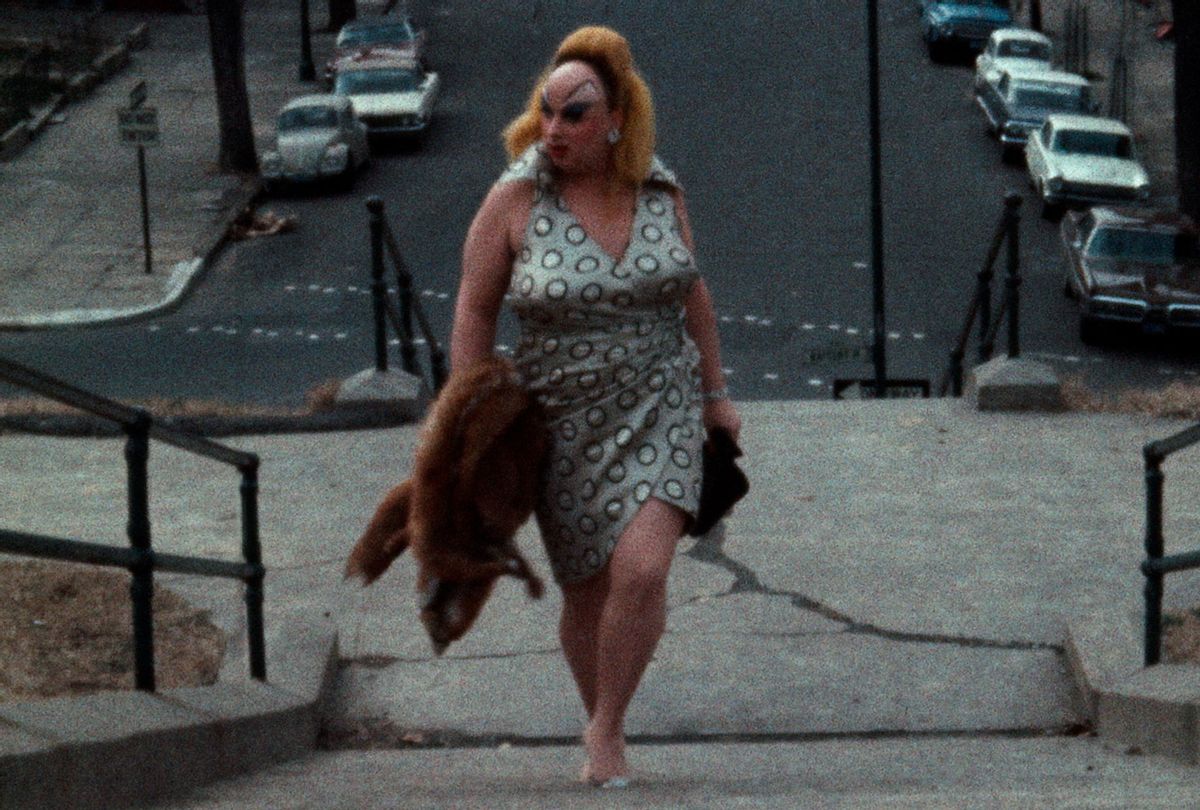 When "Pink Flamingos" premiered in theaters in 1972, audiences reacted to the film similarly to how they did when "The Exorcist" debuted the following year. They fainted. They puked. They fled theaters in terror. And John Waters loved every second of it.

The film that divided audiences with its switchblade sharp dialogue and greasy-sleazy cast of visually threatening unknowns is in the midst of another resurgence in a cultural landscape that is, in many ways, more conservative than it was 50 years ago. The pressure of responsibility, both good and bad, amidst what some would call "cancel culture" and amongst the prevalence of trigger warnings would seem to put a thumb on a movie like "Pink Flamingos" and yet, it's even funnier now than before. Is it because poop jokes and chicken sex are a tie that binds?

"Eating s**t was just a pre-'Jackass' moment of anarchy that continues to startle and delight," Waters said when Salon asked about the film in today's context. "Is it politically incorrect to eat a dog turd? There's a woke debate for the future!

"I understand what you mean about today's trigger-warning audiences," he added, "but I would argue

"I would argue 'Pink Flamingos' IS politically correct"

'Pink Flamingos' IS politically correct. The right people win; the judgmental and the jealous lose."

"Pink Flamingos" can be described in many ways but, in a nutshell, it's the story of Divine (played by Divine), a delightfully sinister woman hiding out in a trailer park in Maryland under the alias "Babs Johnson." Living with her in the trailer are her mentally anguished mother, Edie (Edith Massey), who spends her days in an extra large playpen feasting on hardboiled eggs; her deranged son Crackers (Danny Mills) and his along for the ride friend Cotton (Mary Vivian Pearce). 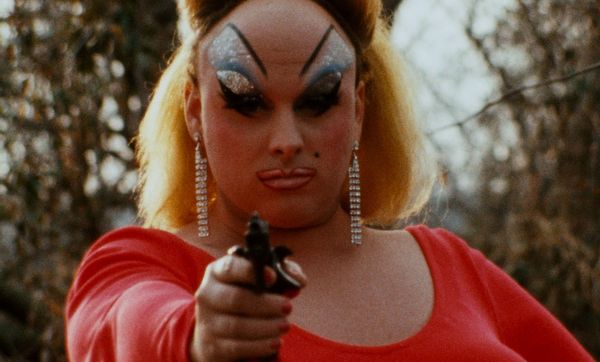 When a tabloid paper dubs Divine "the filthiest person alive," an entrepreneurial couple named Connie and Raymond Marble (Mink Stole and David Lochary) set out to steal her title. When not running their family business – which centers on kidnapping women and using their servant Channing to impregnate them so they can sell the resulting babies to lesbians – they hassle Divine by mailing turds to her trailer and, eventually, burning it down. In the end, Divine triumphs over the Marbles and convicts them of "assholism," sentencing them to death by first being tarred and feathered, and then shot in the head.

See? It's a family film!

Divine, Waters' muse, weaves her signature thread of hilarious berserker-mode through the whole film and then cranks up the insanity even further at the very end by, just for the hell of it, eating real (and fresh!) dog poop during the credits scene; an act that would henceforth be mentioned in every interview or article about Divine (born Harris Glenn Milstead) until the actor's death in 1988.

Waters wrote and directed "Pink Flamingos" using an ensemble cast of friends and local malcontents in his home town of Baltimore for $12,000, and 50 years later it's still largely regarded as the most iconic film out of the 17 movies and shorts he's released in his long reign as the only true "Prince of Puke." This June, the film that Roger Ebert compared to a carnival sideshow saying "it should be considered not as a film but as a fact, or perhaps as an object," and that Interview magazine called "the sickest movie ever made," will be gussied up all presentable-like for its very own Criterion edition. 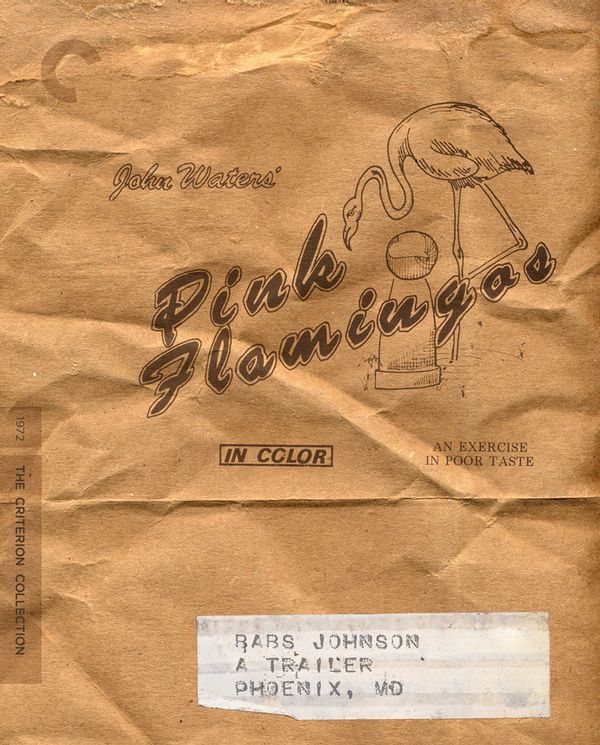 Pink Flamingos (Photo courtesy and copyright Criterion Collection and Warner Bros. Home Entertainment)It's thrilling to consider that in this current landscape of Karens clutching pearls a film like "Pink Flamingos" that packs drag queens, old ladies obsessed with eggs, public nudity via various lunch meats tied to real genitalia, and live chickens used as sex toys into its 108-minute runtime would be given such distinguished treatment. And no one is more pleasantly surprised than Waters himself.

"You can eat s**t, for all I care" walked so "Chaos reigns" could run.

Love it or hate it, "Pink Flamingos" has had an undeniable impact on not only film and filmmaking in general, but in also establishing a certain viral permission-giving to appreciate, and laugh at, what would otherwise just be viewed as disgustingly awful. By setting this film, and all his others, in the pissy back alleys and pube-encouraging dive bars of Baltimore, Waters launched the ship that other directors such as Todd Solondz, Lars von Trier, Jamie Babbit, and Ryan Murphy can now find asylum in. "You can eat s**t, for all I care" walked so "Chaos reigns" could run.

Waters' fans – spanning the globe as sleeper-cell filth soldiers – have stuck close to his career from film to film, book to book, speaking engagement to speaking engagement, and gather annually at a demented summer camp held in his honor. You couldn't shoot a snot-rocket without hitting someone perfectly capable of rattling off a monologue from one of his films. And some of these fans have gone on to have careers of their own, inspired by Waters' whole deal.

One such fan is Fred Armisen ("Portlandia," "Documentary Now!") who wrote to Waters as a teen expressing his adoration. And Waters wrote back! Here's a video put together by Criterion in which Armisen reads his letter, and Waters reads his response.

Even before "Pink Flamingos" was given the Criterion treatment, it entered true legitimacy, by industry standards, when the film was added into the National Film Registry by the U. S. Library of Congress in December 2021.

"I have seen that list every year and fantasized that they would pick Pink Flamingos," Waters said in a video statement sourced by Baltimore Fishbowl. "I think that that one had the best chance, weirdly, because you can dislike the movie but you can't say it didn't affect culture in any way, because I think Divine made all drag queens more fierce and more hip and funnier and crazier. And so I think it has had an effect so I'm just incredibly proud by it. It's very, very exciting to me, with no irony at all."

When "Pink Flamingos" was first released in 1972 it was born into a time when the vanguard of comedy was still found in the likes of "What's Up, Doc" starring Barbra Streisand and Ryan O'Neal, and "Butterflies Are Free" with Goldie Hawn. Those with a tried and true taste for slapstick hijinks with a hippie-dippy sensibility didn't see Waters' opus of trash coming from a mile away, and yet it still found a home, primarily in the midnight movie scene. Cult classics are cult classics for a reason; they break the mold and make it impossible to turn away, even if you have no frame of reference for what's playing out before your eyes. Especially so.

Flash forward 50 years to 2022, where "Jackass" has come, gone, and come again, fans of cinema

It gives weirdos a home

from all walks of life may feel like they've seen it all, but a mention of "Pink Flamingos" will still illicit a snicker and a guilty grin. To watch this film gives the feeling of participating in something naughty. Waters' brand of "slice of life" doesn't shoulder anyone out; it challenges viewers to come in, come closer, and be part of the freak-out experience. It gives weirdos a home. And that's exactly why it still has a home to this day, and likely always will.

The 4K digital restoration of the "Pink Flamingos" Criterion edition will be released June 28 with deleted scenes, new commentary, and tour of the film's Baltimore locations, led by Waters himself.