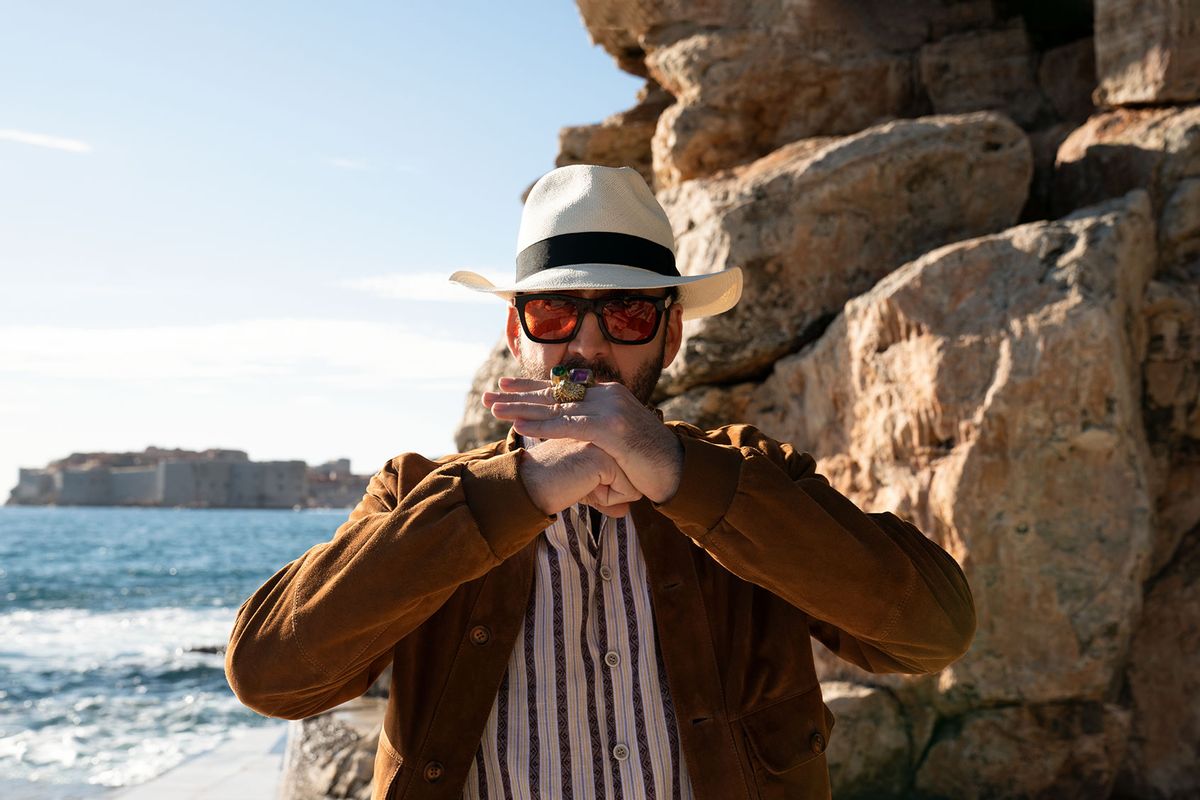 The following contains minor spoilers from "The Unbearable Weight of Massive Talent."

"The Unbearable Weight of Massive Talent" provides Oscar-winning actor Nicolas Cage with "the role of a lifetime," playing a version of himself who agrees to spend some time with Javi (Pedro Pascal), in Mallorca. However, as the guys start to bond, Cage has to secretly execute missions the CIA is asking him to do to determine if Javi is hiding the kidnapped teenage daughter of a Spanish presidential candidate in his lair.

Director Tom Gormican and cowriter Kevin Etten load this bromantic action comedy with copious references to Cage's films while also creating both a fun character study of the actor and an action film that Cage might have made 20 years ago when he was starring in films like "Face/Off" and "The Rock."

RELATED: Give in to Nic Cage's "Massive Talent," a clever caper with the power to make anyone a fan

Gormican and Etten chatted with Salon about working with Cage and making "The Unbearable Weight of Massive Talent."

Tom Gormican: I think Nic has just transcended the idea of an actor who is in or out of favor. He has become this cultural icon and I think of a lot of that has to do with the meme-fication of Nicolas Cage in the last 10 years or so. He has become this person who brings a smile to people's faces or makes them laugh, the supercuts of him going nuts that people watch over and over again. There is something about him, an authenticity to a guy who does whatever he wants and follows his own muse. For us, there is something special about that.
Kevin Etten: What I love about Nic is he just doesn't give a s**t what anyone else thinks. He's doing what he finds interesting. He's not afraid to be an original person. As Tom says, it is getting rarer and rare to find movie stars who feel weird, and authentic, and different.

How many Nic Cage film references did you have in the movie, and what films are your favorite(s)? And any thoughts on the films he had made that are terrible?

Gormican: We have a ton of references, some of them are visual, and less overt. His walking into a pool is from "Leaving Las Vegas." Instead of Elisabeth Shue, we have Pedro Pascal diving in to pull him up. There are a ton of overt references to "National Treasure." I don't know the exact number of visual and verbal references in the film, however.
Etten: As we got more comfortable with Nic, and he got more comfortable with us, he started adding his own references to films he wanted to shout-out or have fun with. In the final scene of the film, he ad-libs a story about belt he has on, and talking about the dresser Jeff, and says, "Not the bees! Not the bees!" which is from "Wicker Man," which he knows is a huge internet meme. In terms of favorite films, I think No. 3, "Leaving Las Vegas," No. 2, "Moonstruck," and No. 1, "The Rock."

Gormican: My favorites are: "Raising Arizona," then "Face/Off" and my all-time favorite is "Adaptation." There are so many great Nicolas Cage performances. And I will say, as far as his other films that he's made, I'm sure some of them didn't turn out the way he or the filmmakers intended them to. But Nic is always really, really solid in all of the ones that I've seen. He does tend to prepare the same amount and just dive in and nail these things, despite what the filmmaking might warrant. 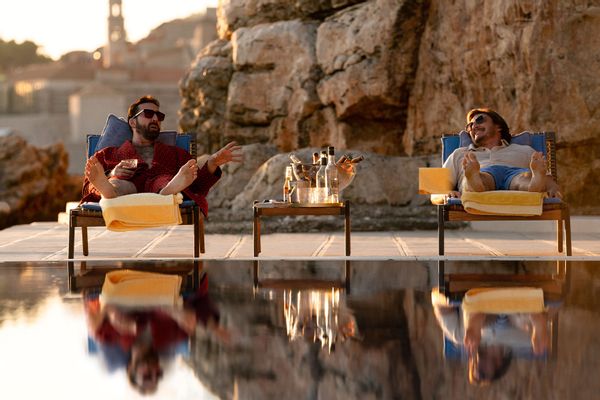 The ﻿Unbearable Weight of Massive Talent (Lionsgate)This is a meta-movie/buddy comedy/spy flick/action film that plays with fantasy and alternate reality. How did you develop the story and string them all together, using Nic Cage as an anchor point? I love the whole movie-star sleepover bromance so much!
Gormican: That is what we were thinking when we were writing it. The only one who doesn't realize they are in a love story is Nicolas Cage, who is doing Charles Bronson. We thought there are bad versions of this movie, and the worst versions make it a parody or a sketch comedy. If you can make people emotionally attached to Nic and his problems, and add a grounded wife and daughter that can make you like Nic more, you root for him to improve his relationships. If we can emotionally attach you at all — through the end of the film, when the family is sitting there and they are watching "Paddington 2" and Nic is crying — if we can move you in that moment, then the film is a film, and not a tacky parody. We tried hard to do that, and I hope that is effective.

I did care, and I go very hot and cold with Cage. In fact, I took my friend Caren with me to the screening, and she was reluctant — "I don't like Nic Cage" — but she ended up liking your film more than I did!

Gormican: One of the biggest compliments in script phase was, "You had no right to make me care about Nic Cage that much!" That's part of the trick of the movie — to get you to buy into that.
Etten: I love the whole section with Pedro as well, but what I enjoyed writing the most was Nic's conversation with the young Nic character. We all feel like we have this voice in our head who at times is trying to shape us into something else or point out all our flaws — who in some way is not an ally. We explored that with Nic and what that meant for him. One discussion we had early on was, "Who do we want this young Nic character to be?" Is he the guy from "Con Air" or "Face/Off," and Nic said, "No." Because by the time he was that age and making those movies, he was a family man and trying to figure stuff out. He wanted to do the character from "Wild at Heart," this guy who is a real a**hole.

How did you work with Cage to contribute to a scene? Were there any limitations or restriction regarding what Cage would or would not do?

Gormican: When you sit down to write a scene about someone talking about their financial problems or not getting roles, it's funny to you, and then Nic reads it and has some anxiety about that, but agrees to do it. But when you're there on the day, and he has to do and say these things that are incredibly self-aware and potentially hurtful to him, we had to get into discussions, and his anxiety about doing them was coming through. He would say "I'm uncomfortable talking about this." But I think these are the most interesting moments — the intersection of the Nic Cage character we created and the real Nic Cage start to come out. In the spa scene, with Neil Patrick Harris, where he's talking about the next role, Cage says, "Never s**t on yourself." He is ad-libbing those lines thinking: Is doing this movie s**tting on myself? and that was real and difficult for him.
Etten: The most sensitive part of script for Nic was in Act 1, where he has to portray this bad, narcissistic father. In our original draft, we pushed even further in that direction. He was an absentee father and disconnected from his daughter. And Nic said, "This is tough for me. I'm so not this guy. I see my kids all the time. I'm in their lives." So, we rewrote that section, so it was more a father trying to mold his daughter into a little version of himself. Obviously, to Nic's credit he knew the film would live or die with how far he'd be willing to go there and have a perspective of where he is in the entertainment ecosystem. 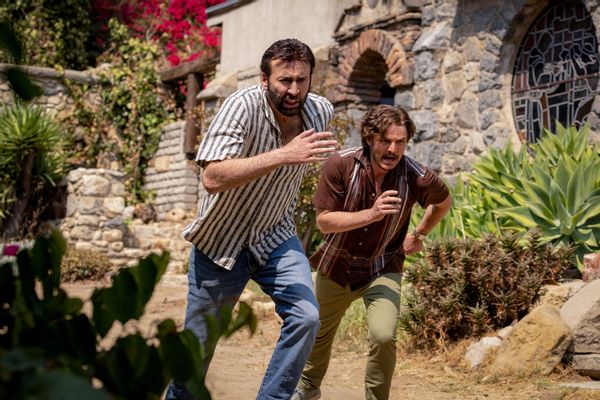 The ﻿Unbearable Weight of Massive Talent (Lionsgate)The best moments for me where the physical comedy, him accidentally dosed himself, or Cage and Javi trying to scale a wall on the run. Can you talk about creating some of the set pieces? Did they have particular Cage film references?

Gormican: If the concept is that Nic Cage has to become the action hero that he was in the late '90s/early 2000s to save his family, we wanted to run through some of the beats and tropes of those kinds of stories. But he is not an action hero. What would a guy, who is an actor and doesn't get to take a time out or call "Cut!" do in these situations? For us, that was the basis of comedy. The project was an exercise in managing the tone. We did those scenes — of him dosing himself and going out on a ledge, and the wall scene, without knowing how broad we could make it and still suck you back in and make you emotionally drawn to the characters. It was a bit of trial and error. Those scenes helped audiences stay on the ride.

Cage is not as manic here as he has been in other films. Was that deliberate?

Gormican: It is. I said I'm interested in a natural performance and to keep it as grounded as possible because the story is shifting tone so many times. We need a somewhat "real" performance. He would say to me. "It's all real, Tom." So, I said, "Can you make it natural and not expressionist?" That would actually anchor us and let us play around with the tone and the broadness of the film throughout.

Kevin, do you think this is Nic Cage's "role of a lifetime?"
Etten: I think it's one of them, certainly. What I love about Nic as a performer is that even as we pushed him into this more naturalist performance — and I do enjoy him in that mode — he would still find ways to put his weird, expressionistic thing on things. When he and Pedro are overlooking the cliff, Nic says, "What are you doing? You brought me out here on a wild goooose chase?!," he had it all worked out. He figured out that beat and this primal scream that comes out of him. As much as we pushed him, he could still find ways to be his expressionistic self.