The actor also recounted an episode in which Depp allegedly struck her body double, mistaking her for Heard 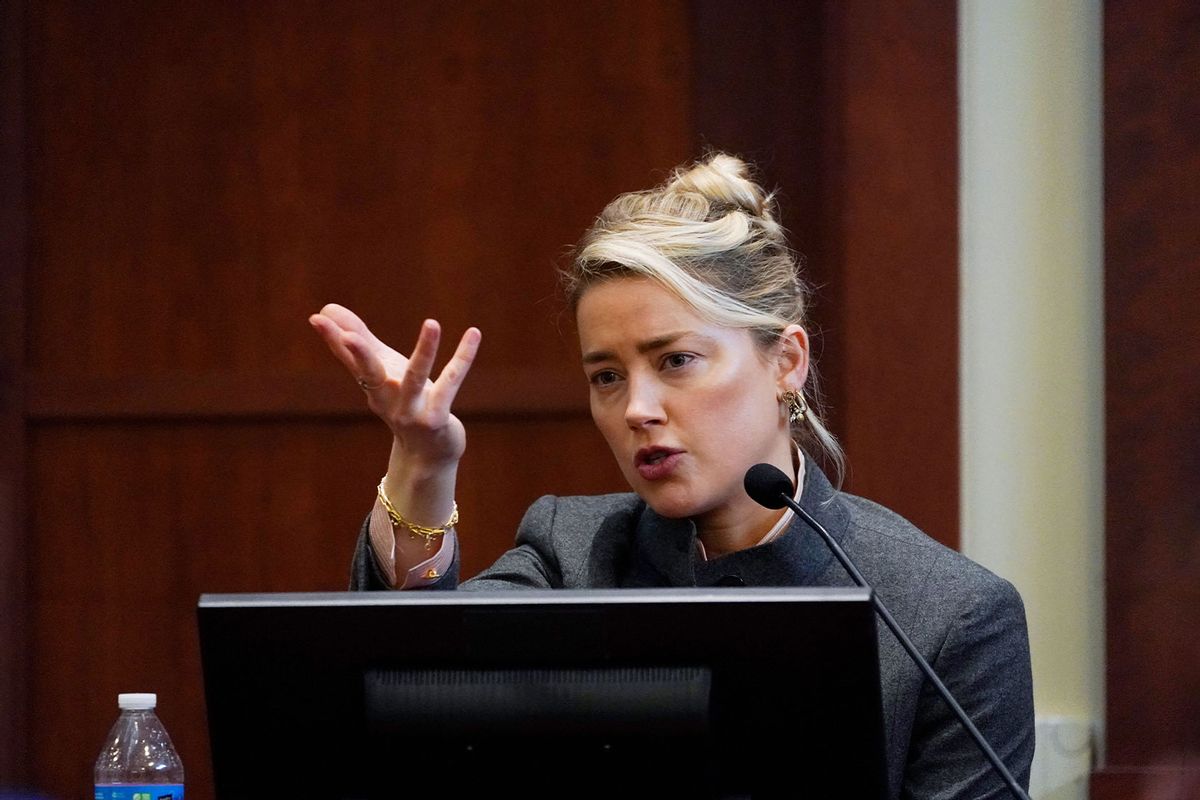 US actress Amber Heard testifies in the courtroom at the Fairfax County Circuit Courthouse in Fairfax, Virginia, on May 16, 2022. (STEVE HELBER/POOL/AFP via Getty Images)
--

The Johnny Depp-Amber Heard trial is back in session, following a week-long hiatus, with Heard taking the stand at Virginia's Fairfax County Circuit Court and resuming her testimony on Monday.

The "Aquaman" actor spoke about the physical assault she endured throughout her relationship with Depp and detailed the makeup routine she followed to cover up marks on her face. Heard told jurors that she used a color correction wheel (similar to the Milani Cosmetics color-correcting palette showed by her attorney earlier in the trial) — which she referred to as her "bruise kit" — and how she learned to transition from green to orange shades when her bruises became more blue and purple.

"The idea is that you want to counteract whatever color you're working with on the bruise," she said, per NBC News. "So first day of bruising, well the immediate is red. The red is what shows up right away. So you want to go with the opposite on the color wheel by dabbing on a bit of the green or something to counteract the red."

Heard's claims were accompanied by graphic photos of her face with red marks and swelling, which she sustained after an altercation with Depp in May 2016. According to the actor, Depp threw a phone at her face. Shortly afterwards, Heard filed for divorce and obtained a temporary restraining order against Depp following a courthouse hearing.

During her Monday testimony, Heard added that she never filed criminal charges and never went to the police because she did not want to be framed as a victim.

Despite her lack of action, Heard mentioned that Depp was also verbally abusive and branded her as a liar and threatened to "ruin" her profession.

In another moment, Heard accused Depp of spewing transphobic and homophobic slurs at her close friend iO Tillett Wright, who is a transgender man and uses he/him pronouns.

"[Depp was] telling iO that he can have me . . . screaming at him," Heard said. She claimed that Wright told her she was not safe while conversing on speaker phone, which Depp also heard. Depp then left the room but returned to scream at Wright "every imaginable horrible name that you can say to an LGBTQIA person, for one, and any human being, ever."

As NBC News also notes, Depp repeatedly misgendered Wright throughout his testimony, saying he was "born a female, if that's the right terminology these days, born a female but she had chosen she at a very young age, she had decided that she was she was a male, and she identified as a male."

Heard also said that one of her final fights with Depp was over his accusations that she had defecated in their bed. Depp previously said that Heard left behind human feces before she left for Coachella in April 2016 after a fight. Heard, however, asserted the feces belonged to the couple's teacup Yorkshire terrier named Boo, whose longstanding bowel problems were exacerbated after it had accidentally ingested Depp's marijuana.

Heard said Depp frequently claimed that she and her friends attempted to "prank" him with human fecal matter.

"Absolutely not," she told jurors about the so-called prank. "I don't think that's funny. I don't know what grown woman does. I was not in a pranking mood."

"I tried to point out how that didn't make sense. . . . My friends wouldn't do that," Heard explained. "That's not something a bunch of 30-year-old women think is funny. What is he [Depp] talking about? And he just kept going on and on about it."

The situation, however, soon became violent, with Depp once again tossing Heard's phone, screaming and grabbing her by the head.

"I don't know if he was intending to hit me in the face or if he was just trying to grab my face, but he was making this gesture around my face. . . .  He said like, 'Yeah, let me see how bad I hurt you this time,'" Heard recalled. She mentioned that her friend, Raquel, who lived in an apartment near the couple's home, later ran in and attempted to stop the fight and calm Depp.

"He hit both of her arms . . . and barreled towards me," Heard said. "I instinctively curl up on the couch, and I just feel her arms come around me."

Heard recounted another violent incident involving Depp, which took place at a remote French chateau after the "Pirates of the Caribbean" actor mistook a body double participating in a sex scene for Amber Heard in the 2018 film "London Fields." According to the Daily Beast, Heard said Depp slapped her across the face and punched her jaw.

"I did not actually film the scene. He demanded that we watch it," she told the court.

"So I have an incredibly jealous man who already is upset with me for breaking the rule that I had a sex scene, on top of that I'm telling him, 'It wasn't me, I didn't shoot that scene,'" Heard continued. "You can imagine how upset he was. He was irate and was calling me a liar, a whore, among other things. That combined with the fact that I had even entertained doing this job with James Franco was a pressure cooker. I called it a week of hell later."