Yes, Trump supporters are victims of the Big Lie scam. No, you don't have to feel sorry for them

Trump shook down his supporters for $250 million with lies, proving the old adage: "You can't cheat an honest man" 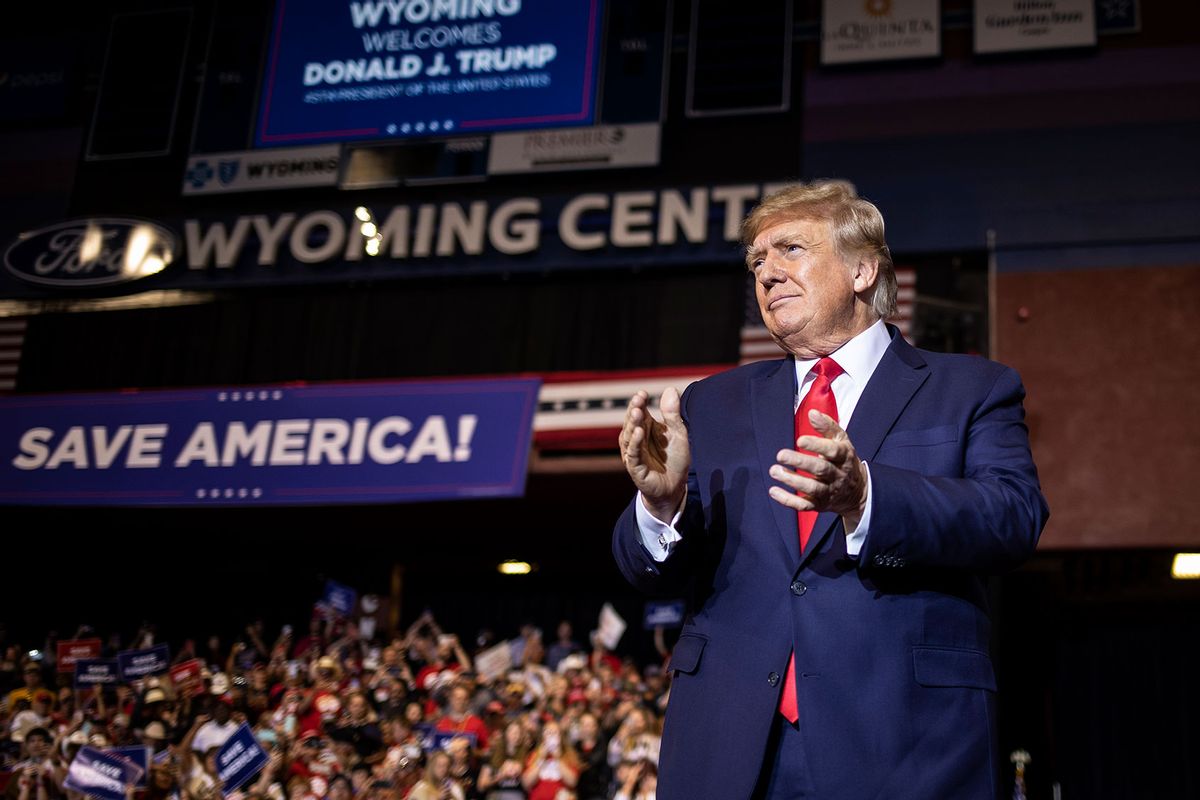 Former President Donald Trump arrives to speak at a rally on May 28, 2022 in Casper, Wyoming. (Chet Strange/Getty Images)
--

One of the bigger revelations during the Monday House hearing about the January 6 attack on the U.S. Capitol is that the scope of the House committee's investigation had grown beyond Donald Trump's efforts to overturn the election. We learned on Monday that they also have evidence that Trump used his coup as a means for financial fraud.

During the entire two and a half months between Election Day and Jan. 6, Trump was shaking down his gullible supporters for cash that he claimed would help fight "election fraud." Those funds, however, largely appeared to go into the pockets of Trump and his allies.

"The big lie was also a big ripoff," declared Rep. Zoe Lofgren, D-Calif., during her opening remarks on Monday. She argued that the campaign used "false claims of election fraud to raise hundreds of millions of dollars from supporters who were told their donations were for the legal fight in the courts." In reality, however, most the money — which is estimated to be a cool $250 million — went into a super PAC. From there, it was redirected into the coffers of Trump himself and towards various friends and family members.

In response to these revelations, there's been a standard response from the anti-Trump majority: Couldn't have happened to nicer people.

Salon started covering the way Trump uses the Big Lie to grift his followers mere days after the 2020 election, so I was used to seeing this reaction. And they will get no argument from me. One really can't deny that Trump's supporters had bad motives and that no one should feel sorry for them. The problem is that the vast majority of Trump's supporters will never admit that they've been had. So it's up to the rest of us to insist that this large-scale cash grab be taken seriously and investigated as a potential crime.

"The big lie was also a big ripoff."

The good news is this: Demanding justice doesn't require sympathizing with victims. Fraud is fraud, no matter how repulsive the victims may be.

There's one way to view Trump's "fundraising" schemes during his coup effort, which is that he snookered gullible people who sincerely believed that the election was "stolen." And that may even be true in some cases. The larger — and uglier — truth, however, is this: Trump separated fools from their money by exploiting their worst instincts.

He made racist appeals about voters in Detroit and Philadelphia being "frauds." Trump's lawyer Sidney Powell promised to "release the Kraken" and excited the "let's go Brandon" crowd because they wanted to swindle Joe Biden's voters out of their victory. A lot of wallets opened up because Trump supporters got caught up in Trump's self-mythologizing about how he knows how to cheat the system, and that he would be able to leverage that talent toward stealing an election. Implicit in Trump's many appeals to his followers was that he would, with enough money, be able to overwhelm the courts with lawsuits until they just gave in and let him keep the White House. And it's no wonder they believed that, as Trump has a long history of abusing the courts with frivolous lawsuits and other resource-wasting tactics to get his way. Trump loves a frivolous lawsuit so much he's been the plaintiff in thousands of cases. But the presidency is too big a prize to obtain through legal harassment, which is why Trump ended up resorting to siccing a violent mob when his court abuse strategy failed.

RELATED: Trump's loss was radicalizing: His promise to "cheat" the system has further deluded his fans

The adage that "you can't cheat an honest man" has never been truer than when it comes to the GOP base. Indeed, Trump is far from the first to figure out that Republican voters are easy to grift. Historian Rick Perlstein wrote the classic "The Long Con" for the Baffler in 2012, which documented how GOP voters have long been targeted with things like mail order scams. People like Alex Jones make most of their money off hawking snake oil marketed with false promises of vitality and, uh, "enhanced" masculinity. Now you can add cryptocurrency to the pile, as well as the industry of "alternative" COVID-19 treatments like ivermectin.

Trump separated fools from their money by exploiting their worst instincts

Defrauding odious people is just being a smart criminal, precisely because it's so hard to see the marks as victims. There was a great deal of concern over this during the fraud trial for Elizabeth Holmes of Theranos since Holmes tended to steal from absolute monsters. She absconded with money from Rupert Murdoch and the DeVos family and snookered people like Henry Kissinger, all of which is so funny that you almost want to root for her. That's why the prosecution focused so heavily on the patients who got bad test results from the faulty Theranos devices, even though the trial was about investment fraud and not medical malpractice. They understood that securing a conviction is a lot harder when people see the victims as people who had it coming in the first place.

Charges for fraud are appealing from a potential prosecution angle since it's about money, which creates a paper trail to present in court. The problem, which the Jan. 6 committee members seem aware of, is that "Trump steals from people who deserve it" isn't the most politically scintillating pitch. That's likely why they're focusing on outrages like Kimberly Guilfoyle getting $60,000 to speak for two minutes at the Jan. 6 rally/riot incitement.

The people Trump pumped for cash aren't exactly innocent, but it's important to remember he and his buddies are even worse.

The main thing is keeping an eye on the prize: Saving democracy from Trump's continuing machinations. Voting rights can't get past the filibuster and voter enthusiasm for Democrats is going to be hard to drum up in the current economic situation. So it's increasingly clear that the most viable path — perhaps the only path — to preventing another coup is for the Justice Department to start imposing legal consequences on Trump and his allies. If fraud prosecutions are the way to make that happen, then so be it. We don't need to pity Trump's marks in order to believe he should still see the inside of a jail cell for defrauding them.