"Only Murders in the Building": Inside Oliver's deadly game night

Is "Son of Sam" a real game, what might it be based on and who among us are innocent blonds? 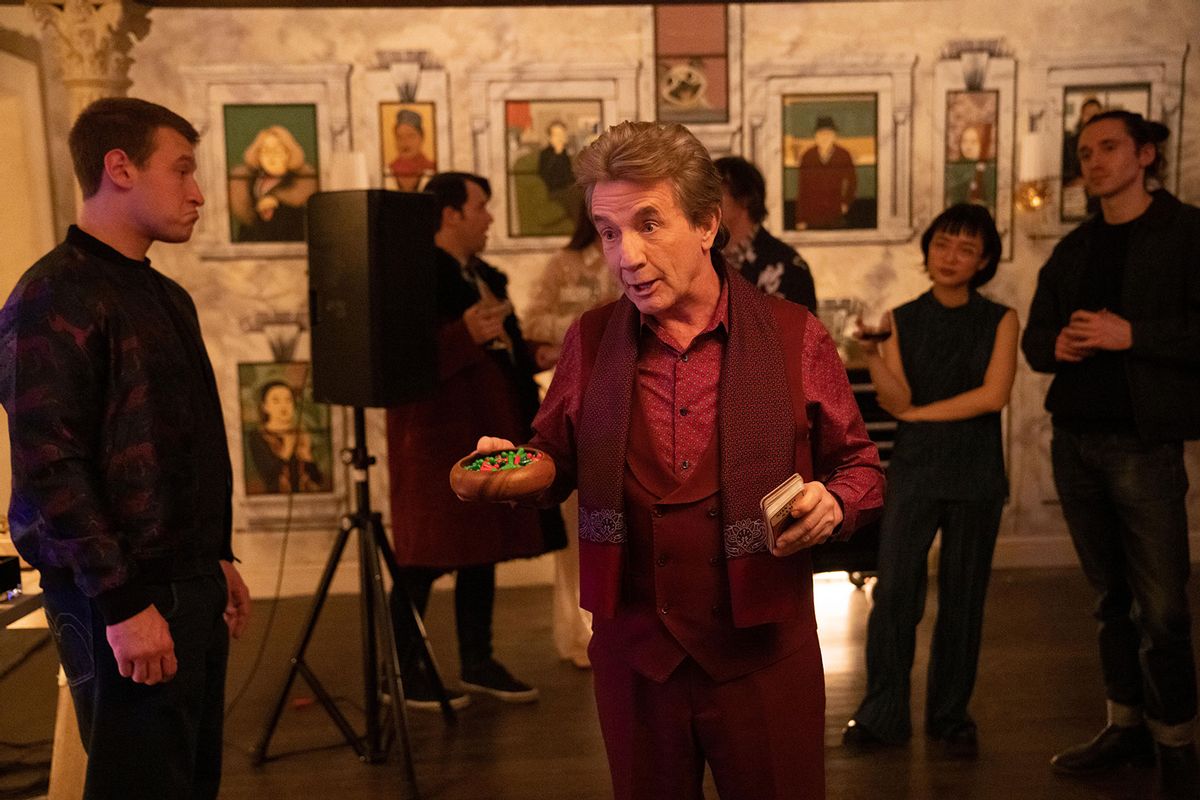 A friend once joked that if there was a psychopath in any room, she'd be able to pick him out: he'd be the only man in the room she was attracted to.

In "Only Murders in the Building," Oliver (Martin Short) professes similar powers of deduction using a card game he's seemingly invented called "Son of Sam." Like a homicidal Old Maid, Oliver's game passes the time between drinking, but it also showcases what his son Will says Oliver "thinks is his greatest skill: knowing when someone is hiding a secret from him."

What is Oliver's murder-y game, what might it be based on — and most importantly, why can't we play it tonight?

Oliver seems like a lot of fun at parties. And oh, what parties they were. A young man in striped bell-bottoms and fringed vests in the 1970s, shaggy-haired and youthful Oliver spent a lot of time with artists, actors and free-thinkers. In the episode "The Tell," written by co-creators Steve Martin and John Hoffman along with Matteo Borghese, Oliver brings a party game idea to his friends, a game Vulture describes as "insane (if not fake)."

"Most of you are innocent blonds."

Named after the serial killer from the '70s, Oliver explains with some sleight of hand and card tricks: "The object is simple. If you're the killer, kill. And if you're anyone else, survive. Most of you are innocent blonds."

But one person will be dealt the playing card labeling them the Son of Sam. Everyone is to keep their card to themselves, gather in the center of the room with hands together. Then when Oliver flicks off the lights and shouts "Blackout!" the killer must secretly kill. Or, pinch someone in the circle, rending them dead (and out, eating pretzels on the couch) for the rest of the game once the lights come on.

Players guess the killer, but if they guess wrong, it's blackout time again. Oliver, of course, is the best at guessing. This game, like all games, is an excuse for him to show off. 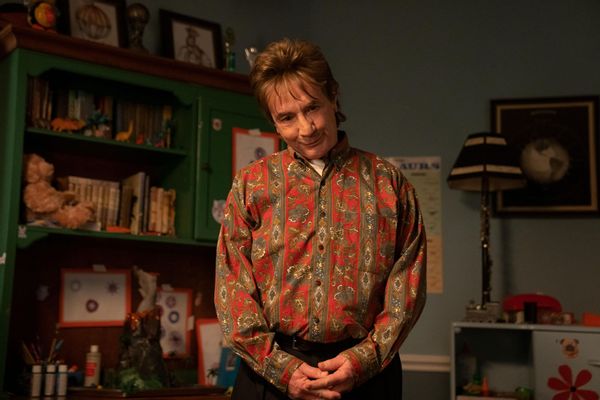 Oliver (Martin Short) in "Only Murders in the Building" (Craig Blankenhorn/Hulu)It also seems like a blast, except maybe for the pinching part. It's low maintenance, requiring only a modified deck of cards. It involves interacting with guests, getting to know each other while being mindful of murder, and it includes a lot of darkness, always a good time, especially when alcohol is involved. Or, as Oliver says, introducing the game to a new generation of party-goers: "Step one: Drugs!"

His "OK, Zoomers. This shindig is flat-lining," is the new "This is my happening and it freaks me out!"

Mabel's new and suspicious girlfriend Alice swears she played this game back at Oxford, though they called it "Jack the Ripper" then. Oliver calls her out on the Oxford thing. What about the game?

"Son of Sam" is not an established game, at least not that I've been able to find, not sold by Parker Brothers (unfortunately), but it recalls several similar party games. Or, parlor games as they used to be called, harking back to Victorian times, but basically meaning: a game played indoors that doesn't require any special tools. Think Charades. 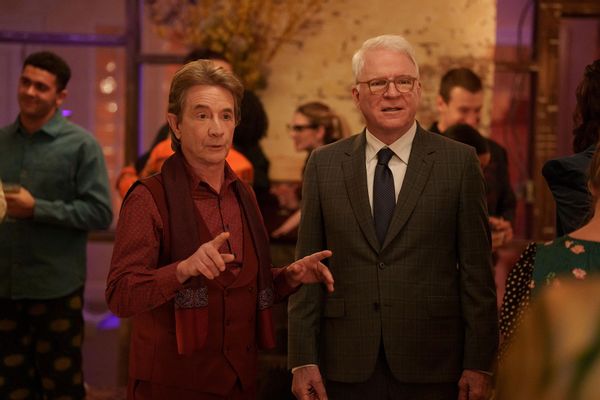 Oliver (Martin Short) and Charles (Steve Martin) in "Only Murders in the Building" (Craig Blankenhorn/Hulu)Or think Wink Murder, a game where a killer is secretly selected from among party guests and "murders" people by winking at them. Survivors try to pick the killer out. (I feel I played this as a child and was bad at it, needing glasses.) Other names for this kind of parlor game include the inverted Murdered Wink, Murder in the Dark, Killer Killer or just plain Killer. Like childhood, the rules are expansive, ever-changing and not really rules.

Much of the fun of Oliver's game is Oliver himself and his invocation.

In a version with a killer and a detective, one person doesn't play, and that person selects the killer and detective roles by tapping people's heads as they sit around a circle with their eyes closed, duck duck goose-style. Eyes open, the detective then moves to the circle's center and must try to find the killer as the winking/murdering goes on around them. In the Deadly Handshake variation, a handshake causes death, not winking.

In a version sometimes called the Lonely Ghost, a party guest can walk up to someone they suspect of being the killer and accuse them directly, which sounds a lot like Oliver's game. When he encourages guests to play it in the present day, it quickly devolves into just plain accusing, causing Mabel (Selena Gomez) to wonder if it's still a game and the ever socially anxious Charles to declare: "If this is what people do at parties, I'm out." 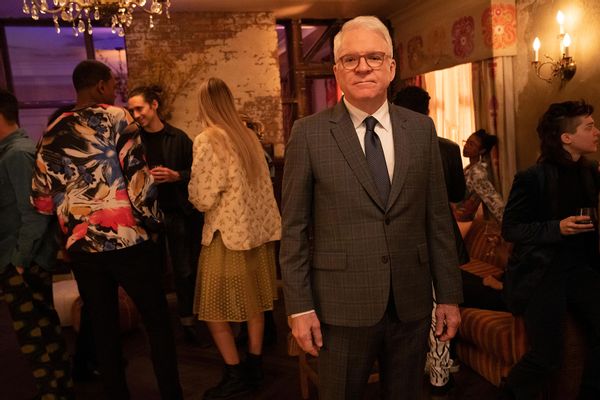 Charles (Steve Martin) in "Only Murders in the Building" (Craig Blankenhorn/Hulu)But the game is such a part of Oliver's swinging past that when he introduces others to it, the show slips into the past too. The costumes change in a lovely, swirling view. The music kicks into a disco beat. He's that powerful. Oliver is always onstage and especially so when he's the center of attention at a fete, directing guests like one of his productions. His "OK, Zoomers. This shindig is flat-lining" is the new "This is my happening and it freaks me out!" from "Beyond the Valley of the Dolls."

Much of the fun of Oliver's game is Oliver himself and his invocation, how he can set the scene with just his energetic imagination, his memory untouched by the drugs he proffers party guests from an ashtray (drugs that are certainly outdated and perhaps just penicillin). Or, at least his love of a vibe is untouched.

Targeting young women with long dark hair, Mabel might have been the killer's type.

"Prepare to travel back to gritty go-go in your face," Oliver shouts to the bemused party. "Dancin'. Bronx on fire. Let's go Knicks! 'Mean Streets.' 'Taxi Driver.' 'Muppets Take Manhattan.' New York City of 1977. And blackout! It's a hot, sweaty summer night, and there's a madman on the loose."

The "madman," for any of the Zoomers not up on their true crime history, was David Berkowitz, also known as the .44 Caliber Killer or the Son of Sam, a serial killer who pled guilty to eight shootings. His murder spree largely took place during a hot summer in late 1970s New York City. As Patch wrote, "And in mid-July, it turned into the summer of darkness, when an epic, five-borough power outage — deemed an 'act of God' by Con Ed — plunged the city into two days of total blackout."

Not everyone today may know what it's like to exist under a very specific threat: a serial killer you know is active.

As Berkowitz wrote taunting letters published by the media, many New Yorkers stayed indoors, despite the blistering summer heat, fearing the murderer who shot at couples in parked cars like an urban legend come to life. Targeting young women with long dark hair, Mabel might have been his type. Some women cut their hair short, to try to protect themselves (Mabel got a haircut for Season 2 . . .). 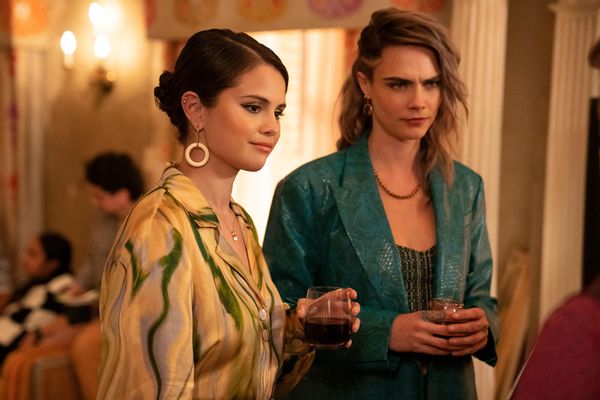 Mabel (Selena Gomez) and Alice (Cara Delevingne) in "Only Murders in the Building" (Craig Blankenhorn/Hulu)For a long time, we've been living under a cloud of fear of mass shootings, and for what feels like forever: fear of a deadly virus. Both fears are justified. But not everyone today may know what it's like to exist under a very specific threat: a serial killer you know is active and has not been caught. In Washington D.C. in the early 2000s, when the Beltway Snipers went on a shooting rampage, Guardian Angels pumped my gas. We were told to walk in a serpentine manner, to make ourselves a more challenging target.

"Only Murders in the Building" has always been upfront about the dangers of romanticizing true crime. In this season, it has prioritized the victims, like Bunny: giving her the send-off and the full, rich backstory of a life lived. We know now what we've lost, who we've lost.

Oliver's game could be seen as romanticizing crime, but it feels more like bittersweet remembering of the past ("We're in New York in the '70s . . . You haven't even been born yet"), when a killer was singular (allegedly) and caught, when he confessed. And when Oliver was young, loved, had the rapt attention of room after room, and the hope of a future, wide open before him like a giant, empty stage.