On "Reservation Dogs," the raddest soundtrack on TV "breaks expectations" for Native storytelling 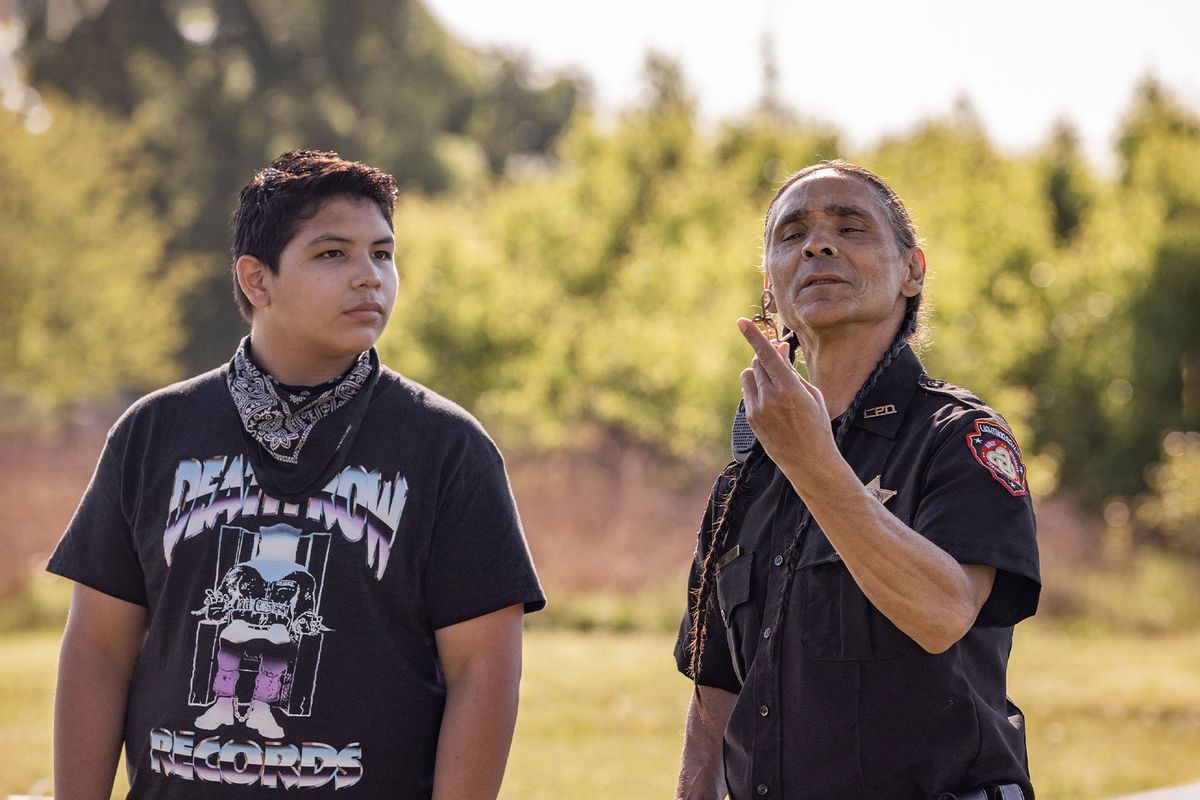 In a memorable moment from the first season of "Reservation Dogs," tribal police officer Big takes teenage Cheese on a reluctant ride-along in a cruiser with a busted tape deck and introduces him to the funk band Redbone by warbling their 1974 hit "Come and Get Your Love."

As with the rest of the show, the music doesn't pander to assumed white audiences.

The FX dramedy, created by Sterlin Harjo with Taika Waititi, returns for its second season Aug. 3 on Hulu. Since its debut in 2021, the award-winning show has been lauded for its distinctive vision and for its total centering of Indigenous experience in rural Oklahoma. The production features a Native cast (up-and-comers like D'Pharaoh Woon-A-Tai as Bear and Paulina Alexis as Willie Jack, and established players like Gary Farmer and Wes Studi), but also television's first all-Native writers' room and all-Native directorial crew.

"Rez Dogs" also has the raddest soundtrack on television, the result of Harjo's eclectic taste and his penchant for upending expectations. The geographic and cultural specificity is reflected not only in the show's immersive tone and idiosyncratic humor, but also, critically, in the way "Rez Dogs" integrates music into the storytelling. From Sturgill Simpson to Canned Heat, from classic hip-hop to traditional Native hymns, the soundtrack is more than background ambiance: It actively develops these multi-generational characters. And, as with the rest of the show, the music doesn't pander to assumed white audiences. Harjo reaches for a truer depiction of contemporary life in Muscogee Nation.

From "Fargo" to "Dark Winds," Zahn McClarnon keeps perfecting his art – but don't call him an artist

The show toes the line of accurate, modern representation by weaving together the teen characters' omnivorous, streaming-age musical references with Indigenous hymns and slang. The varied soundtrack speaks to the insider-outsider identity that these kids occupy in their lives and in the contemporary U.S.

"It's really fun to break expectations of what a Native show – or any show – will sound like," Harjo says.

Harjo's musical selections reflect his wide-ranging individual taste, drawing from punk, indie rock, Americana, hip-hop, funk and traditional, from the classic to the obscure. Music is a practical part of Harjo's creative storytelling process. He always listens to music while writing, and he had made a giant playlist for "Rez Dogs" before it even existed. When the show had the green light, he sent the playlist to the entire production crew. 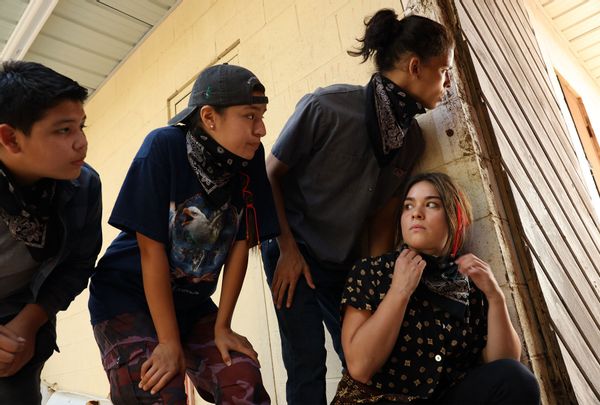 Lane Factor, Paulina Alexis, D'Pharaoh Woon-A-Tai and Devery Jacobs in "Reservation Dogs" (Shane Brown/FX)One of the recipients of that playlist was Tiffany Anders, who Harjo recruited as music supervisor. Anders is an indie musician who has been music-supervising in film and television for 12 years, on shows like "PEN15," "The Chair," and forthcoming Netflix comedy-drama "Beef." Introduced to Harjo through her mother, filmmaker Allison Anders, they bonded over a shared love for '90s indie rock, Lee Hazlewood, and Native rock icons Link Wray and Jesse Ed Davis. Though the first season reflects Harjo's vision, Anders helped to problem-solve and make suggestions for inclusion, such as a compilation of First Nations artists from Light in the Attic, the independent record label known for its reissues.

"The music [of 'Rez Dogs'] paints a world that is unexpected, that people might not think for this group of teenagers and this town and this landscape," Anders says. "It's not generalized, on-the-radio music."

Ironically, the series does open with a radio broadcast: a Muscogee deejay introducing The Stooges' "I Wanna Be Your Dog," which soundtracks the gang's theft of a chip-delivery truck. The music blasts in scene until Elora (Devery Jacobs) shuts off the dial. This musical cue simultaneously establishes the show's tone and style (Harjo says he wanted the tone to be "immediate and relentless"), and indicates the song is happening in the sonic landscape of the story, dropping the audience into the characters' perspective.

"Harjo's choices can be unpredictable. Most showrunners' inclination is to make everything very realistic," Anders says. "'An art gallery should sound like this . . .' People have these preconceptions about what different spaces should sound like, and the great thing about working with Sterlin is that he throws that out the window."

"Hip-hop is thought of as music of the streets, but that's why Native audiences connect to it."

Throughout the series, music provides texture that is realistic and hyper-realistic, integrated into both the present action and the characters' memories and fantasies. According to Harjo, music cues "help to tell the story and help the audience to know a character." For example, when viewers meet Rita (Sarah Podemski), Bear's single mom, she is applying makeup in the bathroom mirror while humming TLC's "Waterfalls." This cue signals Rita's generation while demonstrating that "she's feeling herself," as Harjo says. The lyrics – "Lonely mother . . . staring at her son that she just can't touch" – stands in contrast to Bear sneaking his own stolen cash into his mom's purse, in a twist on the caretaking dynamic.

Several characters get small musical signatures. Bear, for example, favors listening to "Stone Cold Lover" by Mato (who also composed the score). Multiple teenage characters wear Wu-Tang Clan T-shirts, and "Protect Your Neck" plays in the first episode. Harjo says he's sure all the kids are into Wu-Tang. As the music "budget babysitter," Anders says when she joined the project, she had to joke with Harjo, "We can't have Wu-Tang in every episode."

"We use hip-hop and punk rock, which are connected," Harjo says. "Hip-hop is thought of as music of the streets, but that's why Native audiences connect to it." 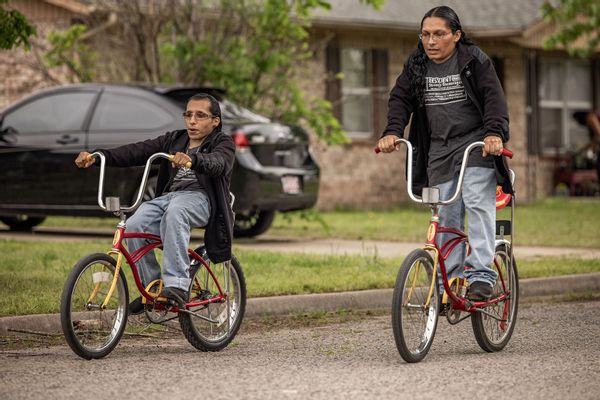 Though the use of hip-hop is not reductive, the guest appearance of rapper Sten Joddi as Bear's unreliable father, Punkin Lusty, sparked accusations of anti-Blackness. Screenshots surfaced of Joddi's 2014 social media posts using the N-Word, to which FX "condemned" in a statement and for which Joddi issued an apology. Joddi doesn't return in Season 2.

The track "Greasy Frybread" is full of inside references like the Harjo-penned lines, "Sofkee on the burner/ Hokte hokte head-turner."

In an interview with Salon last year, Harjo explained the Native teenagers' connection to hip-hop: "[The characters] gravitate towards ideas that aren't necessarily their experience. But there are things that they identify with in those experiences."

The show's original music often functions as extensions of its humor: specific and culturally affectionate without dipping into stereotype. The track "Greasy Frybread" is full of inside references like the Harjo-penned lines, "Sofkee on the burner/ Hokte hokte head-turner."

Harjo recruited Mato, a young producer and multidisciplinary artist who draws on a range of influences including hip-hop, to compose the score because he had the "DIY vibe" he was looking for.

"Early on, a music editor suggested to the composer, 'Do you want to add more drums and flutes here?'" Anders recalls. "And Sterlin said, 'No. No drums, no flutes.' That's not what we're doing here."

Coming to this project "as a California white girl" unfamiliar with Native Oklahoma, Anders says she had much to learn. Harjo hipped her to many indie Oklahoma artists who are featured in the show, including Broncho, Samantha Crain, and Jacob Tovar, who performs on screen in a honky-tonk scene. Tovar sings "Cleveland Summer Nights," written by Oklahoma artist Wink Burcham, as Elora watches Daniel unravel on the last night of his life.

"That song sounds how it feels to live in a small town and wonder, 'What's beyond this place?'" Harjo says.

Harjo credits northeastern Oklahoma's geographic centrality with the diverse mash-up of its musical influences and output. A surprising array of music is in the air, from the mainstream to the most experimental niches. In the "Come and Get Your Love" episode, for example, a character wears a Tulsa Noise Fest T-shirt, which director Blackhorse Lowe describes as a kind of Easter egg, a nod to those in that community.

"We tried to incorporate some Southwest punk-metal," Lowe says. "I was glad we were able to put in some Oklahoma noise and represent that scene a bit." ("If I let Blackhorse choose all the music, it would be the heaviest, wildest death metal you've ever heard," Harjo says.) 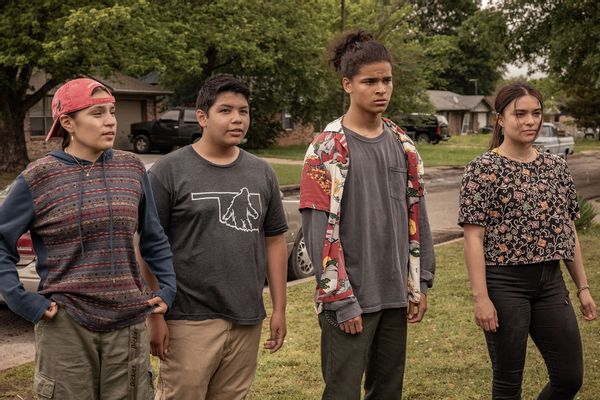 Harjo says he doesn't feel pressure about the show's success. "I've created a bubble of people around me that I want to work with, that I feel safe working with, and doing it in Oklahoma. It keeps you humble," Harjo says. "And with Season 1, I had nothing to lose. I knew what I wanted, and if I ever got the chance and the budget to do it, I had to put blinders up to the pressure. I had to be fearless."

There's inherent tension in the music of "Rez Dogs," enacting the characters' entrenchment in their community and their momentum toward independence – perhaps in California or some other great beyond. The friends' young grief over Daniel's death serves as the push-pull between these poles. Teenagers' impulse to separate from their guardians and childhood homes is common territory for coming-of-age narratives, but the culturally and sonically specific landscape makes this story about much more. "Rez Dogs" carries an abiding sense of loss throughout. The main characters have access to shards of knowledge and cultural ephemera, including music, but the throughline from previous generations is scattered or disdained. Their guardians – from their parents and cousin-uncles to Officer Big – are searching, too.

For a story centered on four teenagers, the portals for growth and revelation occur during imperfect generational transmissions, which brings us back to Redbone's "Come and Get Your Love." By the end of the episode, Big has resolved a case of mysterious copper figurines and Cheese has improbably fixed the cruiser's tape deck. When the song comes on, Cheese insists through a polite grin, "I still don't know it," but ends up singing along. Under the closing credits, footage of the real band plays.

"That song is ubiquitous, but people don't know it's by a Native band," Harjo says. "I wanted that moment to be a reclamation of that song. And in that reclaiming, what we find gets to be so surprising. And rich."