He-Man: Most powerful Gen X unifier in the universe

As a collector and gay man who once dressed as Skeletor, I reflect on the influence of Mattel's muscle-bound toys 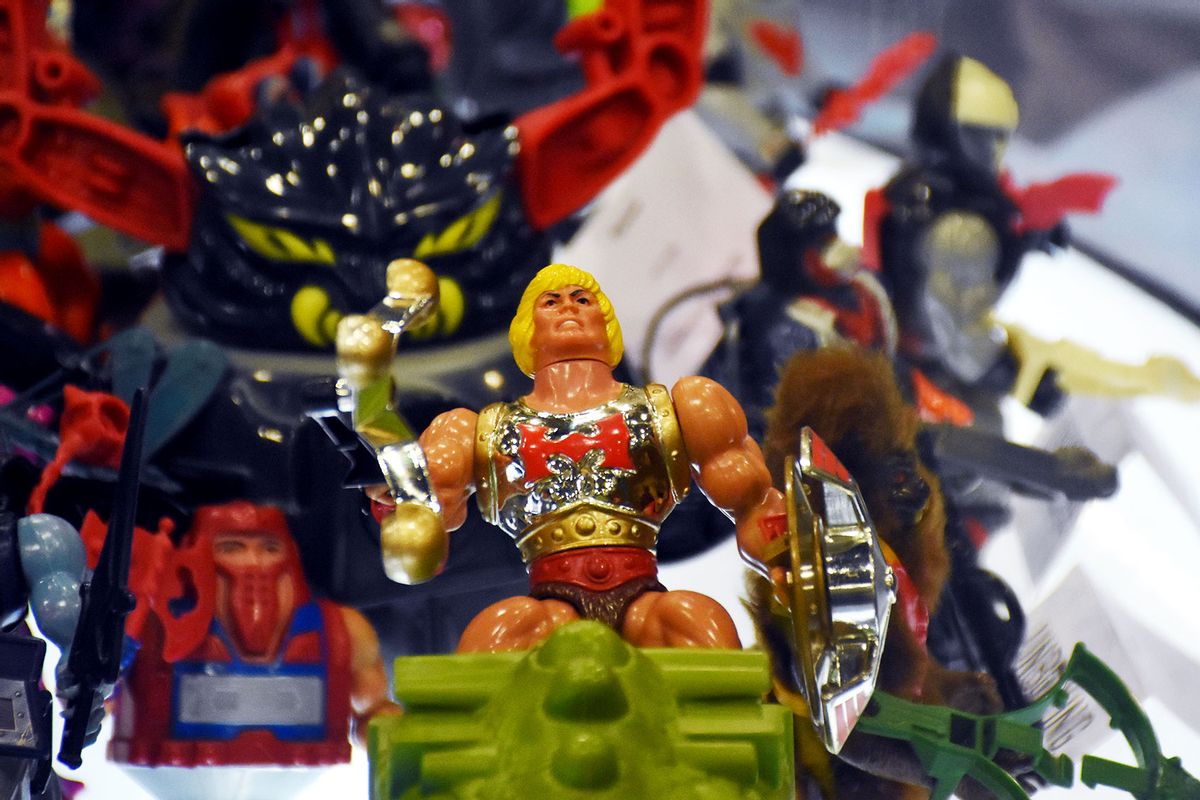 Whenever my husband and I move, someone has to lug the two large storage bins full of my He-Man figures from one place to the next. They're not particularly heavy; for a muscular Master of the Universe who hangs with many dozens of identically fit guys, three strong female leads, a couple giant cats, and a floating wizard – they're pretty light. Those crates though, are weighty with memories.

Earlier this month, the National Toy Hall of Fame in Rochester, New York inducted He-Man into its ranks, along with Lite-Brite and the top. The hall recognizes toys that have "inspired creative play and enjoyed popularity over a sustained period."

I saw the good guys as looking out for people like me, and believed myself worthy of rescue.

Growing up as a boy in the '80s, my mother gave me a choice; I could build a collection of toys much like my older brother had of his Star Wars, but I had to choose one type. Ronald Reagan was president and MTV started putting music videos on the air just as my childhood became flush with options: transforming robots, round-faced dolls that grew from vegetable gardens, a real American hero.

He-Man, with his 3,000 abdominals and dual-identity — as the most powerful man in the universe living to save his world or a self-absorbed prince named Adam — appealed to me not only as a gay kid who also held a secret, but He-Man lived on a far away planet called Eternia, not on Earth like the Transformers or G.I. Joe. As I looked for escape from a fairly tumultuous home life ruled by an alcoholic father and a school life full of bullying, I wanted to go to there and be protected by my hero.

He-Man didn't seem to care who he helped. When the forces of evil punched down, he punched right back. In many an episode, the baddies used some mixture of brute force and alchemy to exert control over less physically or magically gifted Eternians. He-Man and friends like Ram Man – whose spring-loaded legs and flat, hard head allowed him to break through walls and rescue captives – gave respite to the weary. As the fattest, gayest kid in my school, subjected to plenty of name-calling and playground assaults, I saw the good guys as looking out for people like me, and believed myself worthy of rescue.

Every few weeks, my mother and I would drive the 20 minutes from our house to the closet Zayre department store, and I'd pick one $5 muscle-bound figure. I'd stare up at the possibilities in the almost totally He-Man aisle, sure that there would be a few new choices — more than 70 characters became action figures between 1981 and the mid-'80s. Mattel knew what they were doing. Their business model relied on the syndicated television show that aired each day after school for millions of kids. We'd check our Swatch watches, fill a bowl with Lucky Charms,and hunker down in front of our boxy televisions, exposed to new warriors and villains we'd need to have in 5-inch plastic form. How else would we in our own homes adequately stoke the battle between good and evil waged on Eternia?

As much as Skeletor was hell-bent on destroying He-Man and ruling Eternia, he did it with flair ... Entire YouTube videos are dedicated to his verbal quips.

On the car ride home from Zayre, I'd peel open the clam shell packaging and hold the new figure in my hands, savoring that first release of the fresh-off-the-assembly line plastic. Every figure came with its own comic book, usually with the character's origin story. By the time we parked in our driveway, I had the backstory down, and it was then up to me what his (or her, but usually his) future would be.

Hiding from my father most nights, I'd lock myself away in my bedroom. I'd transport myself far away, and by bedtime, a massive conflict was resolved, usually by the brute force of He-Man over all challengers.

In many ways, He-Man was the dullest of all the characters; once he showed up, no magic spell from his arch-nemesis Skeletor or strength of one of Skeletor's lackeys would be any match for him. But, a lot could happen before the inevitable He-Man win: one of the toy line's giant birds could be shot out of the sky, Skeletor might breach the walls of He-Man's stronghold Castle Grayskull, or one of He-Man's allies might plummet off a cliff (also known as the edge of my twin bed). Things might look dire, but eventually He-Man arrived, tossed bad guys off the cliff like bread crumbs, and restored order. It was, for me – squirreled away, alone, frightened of what lurked just outside my door – a means of escape and hope. Eventually, things would work out.

When I turned 13, I sealed my He-Man collection in its first storage container, upgraded over time to honor its place in a life I survived, and to protect each figure from the passage of time.

In my mid-20s, at a party at my home my friends and I started talking about toys from our childhood, and He-Man took over. My female friends present rolled their eyes and moved on to other topics and a different room. The guys and I, regardless of race and sexuality, poured drinks and recalled the names of the various characters. I raised my storage crates from the basement, pulled off the lids, and "Oh, man, he was my favorite," and "Do you remember when?" anecdotes filled the room.

I held up one of my favorites, Fakor, remembering a birthday long ago when I unwrapped him, a gift from my parents. Unable to match He-Man's strength, television Skeletor used a spell to create Fakor, an evil version of the titular hero equal in mass and power, in about two seconds. The action figure's differing feature was his blue skin compared to He-Man's beigey white, while on the TV show his glowing white eyes distinguished him. "Why didn't Skeletor just make dozens of Fakors?"

We laughed, poking holes in plots that 20 years ago felt impenetrable. My tribe, I recognized, had been spread across the world in the '80s. We'd each considered good versus evil, each battled some form of insecurity as kids and were all holding out for a hero. My friend Kyle, a straight guy raised in Mexico and my gay bestie Jay, raised in the U.S., turned action figures like Cringer – a giant green and yellow-striped tiger that was Prince Adam's pet but transformed into Battle Cat when fighting alongside He-Man – over in their hands. They put the red plastic helmet and body armor onto Cringer, concealing his identity. "There," Jay said, "Unrecognizable." We all laughed at the absurdity of what had once made total sense. Decades faded away in the kitchen, and we were just boys with our toys again. 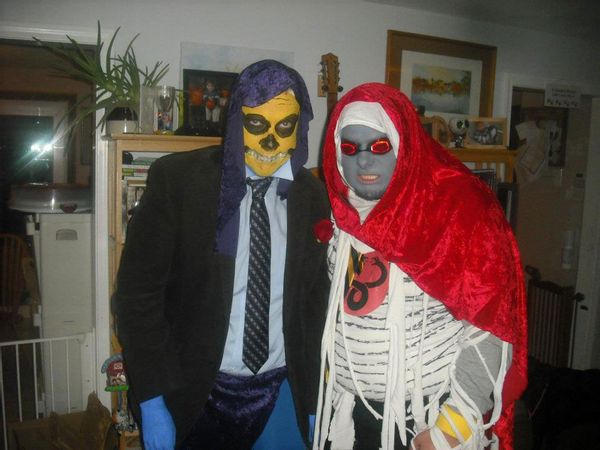 We imagined the entire Halloween evening as a blind date between Skeletor and Mumm-Ra.

Skeletor was another of my favorites. Looking back as an adult, it was the extreme campiness of his character that appealed. As much as he was hell-bent on destroying He-Man and ruling Eternia, he did it with flair, relying on his wit as much as his muscle. Entire YouTube videos are dedicated to his verbal quips tossed at his henchmen and enemies alike.

One of his main cronies, Trap Jaw, was a dim-witted cyborg with a razor-toothed jaw. In one episode, Skeletor clocked Trap Jaw for his idiocy by tapping on his metal head and listening to the clink as he says, "Just as I suspected: hollow." Skeletor, a skull-faced sorcerer, could bring you to your knees with a spell or wordplay. In a childhood where I might not be able to outmuscle my bullies, I could verbally outwit them. Skeletor also hung around with a striking woman named Evil-Lyn but was obsessed with the hunky He-Man – relatable to myself and many a gay fanboy.

In 2012, the second year I was with my boyfriend (now husband), I dressed as Skeletor for Halloween, and Dave wrapped himself in shredded white t-shirts and became Mumm-Ra, the bad-guy equivalent of Skeletor in the competing '80s toy and television line ThunderCats.

Dave and I, roughly the same age, grew up an hour apart in Massachusetts; we each watched He-Man as kids and found common ground about our experiences of the toy line and the television show.  In our mid-30s on that Halloween, now quite aware of the potential homoeroticism of He-Man and cognizant of Skeletor's unhealthy fixation with his arch-nemesis, we twisted the characters' backstories. We imagined the entire Halloween evening as a blind date between Skeletor and Mumm-Ra. All night long we wooed each other with promises of world domination or the skulls of our enemies.

When Dave and I bought our home north of Boston in 2017, the crates of He-Man figures landed again in the basement. We christened our new home Castle Gayskull.

As I painted a skull onto my face in my 30s, put on a suit jacket and offered a skull instead of a rose to my date Mumm-Ra, I exemplified He-Man's continued significance within my generation. It's an endurance that led to a 1987 live action film, a 2002 cartoon reboot and two new Netflix iterations in 2021, the first produced by Kevin Smith.

Dave and I binged Smith's "Masters of the Universe: Revelations" quickly at Castle Gayskull, pleased that a new female character took center stage, disappointed that the once campy Skeletor was more malicious than comically tragic in his pursuit of ubiquitous power. I traded texts with the same boys who'd gotten lost in the nostalgia bubble at my party years before, each of us invested in where the series took characters old and new. Some liked the darker tone of the series and wondered where the storylines would go next. None of us, though, felt moved the way we'd once been. Decades had passed – some of us watched with our own children – looking to teach them and remind ourselves that good always triumphs over evil and there are only two sides to any story. Smith reimagined Eternia and its inhabitants beyond this binary: suddenly Evil-Lyn could question her allegiances, Teela, a close female ally of He-Man, could take center stage, and He-Man could die.

Many in the fandom railed against the changes, longed for entire wars to resolve, driven by He-Man, in 30 minutes again. We took strong stances on what could and couldn't become of our beloved characters. We revealed our various desires: for a broader narrative where women and characters of color decided the future of Eternia and determined their own fates or a return to the white muscular savior as the ultimate clincher. As Jay and I texted from our homes, each watching with our husbands, we showered love on Teela, voiced now by "Buffy the Vampire Slayer's" Sarah Michelle Gellar. All of us "Buffy" fans, we relished the new life she gave an old favorite character. No longer was she brave but still needing He-Man to save her, now she saved herself and the day.

Regardless of how the fans landed in their opinions of old Eternia versus new, we watched, we argued, we talked. We uncapped the proverbial storage crates of our youths and connected again to a whole other world. We were kids again, touched by the nostalgia–perhaps one of He-Man's greatest strengths – seeing our real world 30 years later and different, once again reflected in an imaginary one.

about toys and Generation X